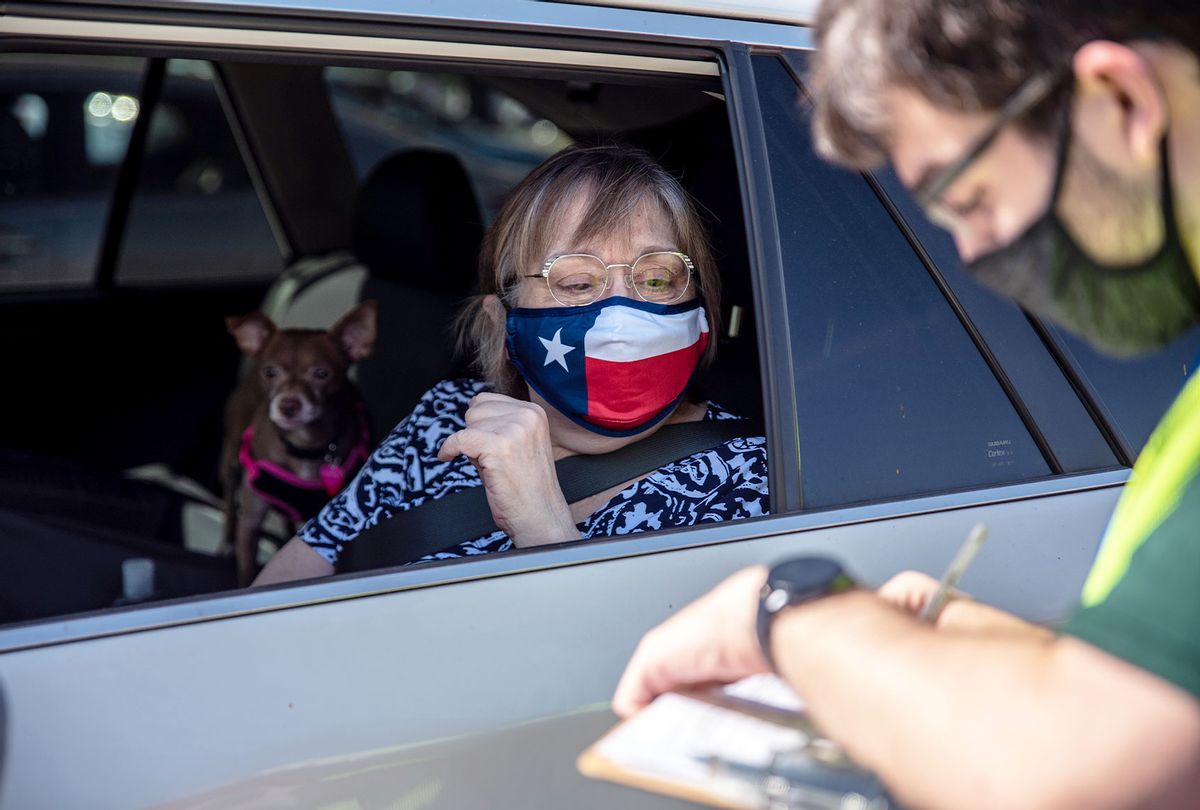 A poll worker helps a voter at a mail in ballot drop off location on October 13, 2020 in Austin, Texas. The first day of voting saw voters waiting hours in line to cast their votes. Gov. Greg Abbott announced earlier this year that he would expand early voting for the election beginning on Oct. 13. Mail in voting began on Oct. 8 and has been part of a legal battle after Gov. Abbott declared each county may only have 1 mail in ballot drop off center, the ruling was later struck down in federal court but then the decision was upheld when a stay was ruled in the overturning. (Sergio Flores/Getty Images)
--

Texas Republicans have failed to find any substantial evidence of outcome-altering fraud in the 2020 presidential election after leading a months-long recount at Donald Trump's behest.

The findings, reported by the secretary of state's office on New Year's Eve, are part of the first phase of the audit, which targets the four largest counties in the Lone Star State: Collin, Dallas, Harris, and Tarrant. According to The Texas Tribune, the initial findings bore "few discrepancies between electronic and hand counts of ballots in a sample of voting precincts."

Specifically, the audit unearthed only 509 possible duplicate votes – less than 0.005% of the approximate 11.3 million ballots cast in the state. Further, only 67 votes were cast under the names of voters who were deceased.

Remi Garza, president of the Texas Association of Election Administrators, said that the results aren't "too far out of the ordinary."

"I hope nobody draws any strong conclusions one way or the other with respect to the information that's been provided," Garza told the Tribune. "I think it's just very straightforward, very factual and will ultimately play a part in the final conclusions that are drawn once the second phase is completed."

The secretary of state report found that several voting discrepancies could be explained by procedural errors. For instance, in Collin County, some voters were given the option to cast a curbside ballot, allowing them to vote from their cars. County officials said that this option did not produce a paper trail, leading to slight difference between the manual vote count and electronic one.

The second phase of the recount is set to be conducted this Spring. According to an outline of the process provided by the state, phase two involves "a comprehensive election records examination" to "ensure election administration procedures were properly followed." The process will, among other things, address signature verification, the provision of early voting materials, voting machine accuracy.

The "forensic audit" was originally launched back in September, hours after the former president pressured Republican Gov. Greg Abbott to investigate the state's handling of the general election, even though Trump won handily in Texas.

"Despite my big win in Texas, I hear Texans want an election audit!" Trump wrote in a letter to Abbott at the time. "You know your fellow Texans have big questions about the November 2020 Election."

Since then, Trump and his allies have pushed for a number of audits in various battleground states, including Michigan, Wisconsin, Georgia, and Arizona. None of them have produced any evidence of widespread fraud. One of them in Arizona found that President Biden held an even larger margin of victory over Trump than was originally reported.