It might have been easier when all this started — we knew what to do. The uncertainty of Year 3 is the worst part 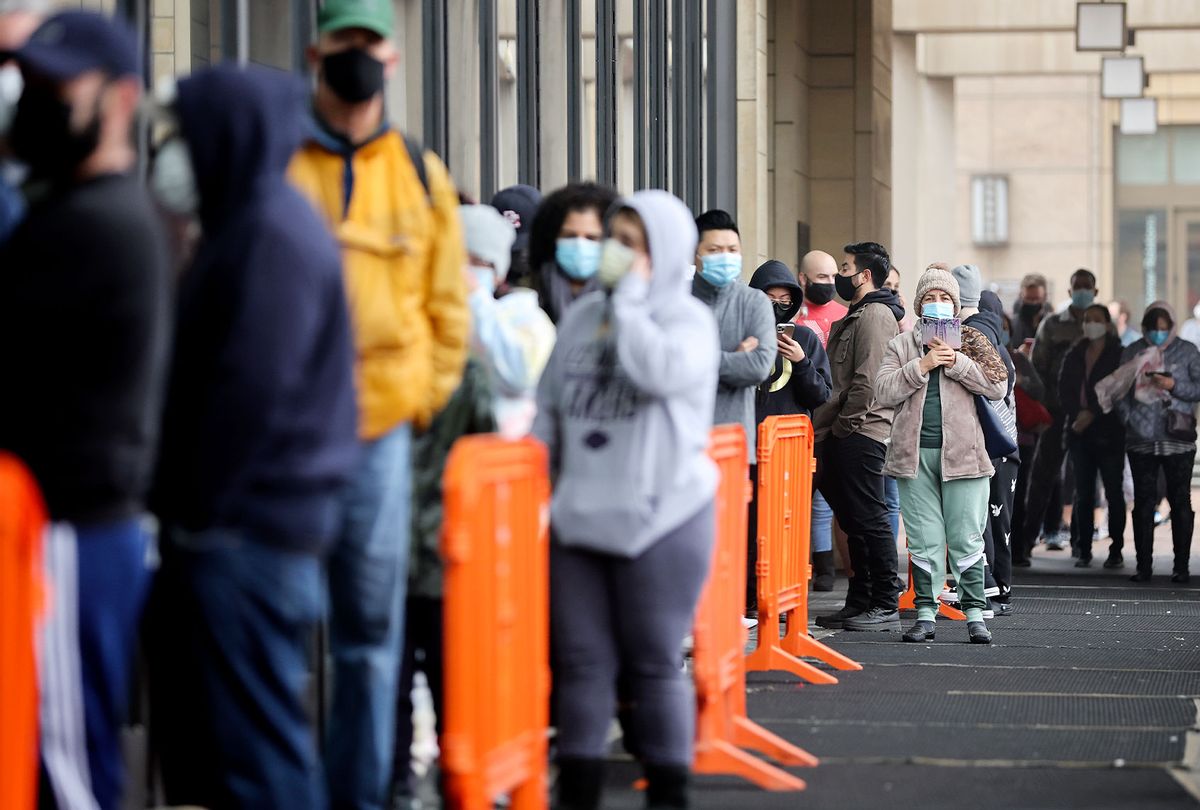 People wait in line to be tested for COVID-19 at Union Station on January 7, 2022 in Los Angeles, California. A free distribution of COVID rapid test kits for those who received vaccination shots or booster shots was also held nearby in Union Station. Thirty new deaths and over 37,000 new cases of COVID-19 were reported by Los Angeles County amid the continued spread of the Omicron variant. (Mario Tama/Getty Images)
--

There were several roads through the northern Iraqi city of Mosul that American soldiers of the 101st Airborne Division used to call IED alleys. This was because 30 to 50 improvised explosive devices either exploded or were located and disarmed along the roads in that city nearly every single day. You had your choice of routes to take through the city — Mosul was (and is) a big city, with a population of about 1.2 million at the time the U.S. invaded Iraq in 2003 — but the closer you got to the huge base camp where soldiers from nearly every unit in the division had to go almost every day for supplies of food, ammunition, diesel fuel and repairs, the more dangerous the roads got.

Soldiers weren't killed or wounded by IEDs in Mosul very often, but Humvees back then weren't armored. Most had canvas tops but had lost (if they ever had) the canvas doors that typically came with the vehicles, so when you rode through Mosul there was nothing but air between you and whatever dangers were out there. Tactics employed by convoys included varying vehicle speeds, weaving from side to side, maintaining a larger distance than usual between Humvees and, of course, being on the lookout for anything suspicious, like a spot of freshly turned soil or a sudden lack of pedestrians along the roadside. Everyone who had to make a trip down one of the many IED Alleys knew there was a chance you could be hit, but soldiers climbed in their vehicles and drove those roads every single day.

I remember late one afternoon riding in a convoy that made that trip to the base camp to pick up a hot meal for the company. Inside the building where the company was housed, soldiers were chatting with each other, joking around, talking about their score in a video game or the stupid music one of their buddies played too loudly on his boombox. But they fell silent the minute they charged their weapons and started piling into the vehicles outside. The uncertainty was the worst part. You never knew if it might be better to be in the first vehicle in the convoy or the last, or even one of the two or three in the middle. You never knew if the route the convoy leader picked was the right one. If you were honest with yourself, you recognized that the unseen enemy had your fate in his hands. Whether you lived or were wounded or even killed when you went outside the wire wasn't up to you.

Back here on the home front, we drive down COVID alleys every single day. As we enter our third year of the war against this deadly disease, it's the uncertainty that really gets to you. We already went through two surges. Is this surge, or spike as they're calling it now, the last one? Which route do we take through it? Is it OK to go out to restaurants? NPR reported on Tuesday that COVID-19 hospitalizations around the country had reached "a new pandemic high this week with 145,982 patients hospitalized."

And what about our kids? "Pediatric COVID hospitalizations are also at the highest rate of the pandemic," according to NPR. There are reports in practically every state of school shutdowns — not because of the number of children infected, but because of shortages of teachers, school bus drivers, principals and other administrators, even among custodial staffers.

People are saying it felt better back during the early days of the pandemic because everybody knew what had to be done and we were all in it together … or at least it seemed that way. With businesses and schools closed, you stayed home unless you had to venture out for food and other supplies. Now? "COVID's latest surge spreads an epidemic of confusion," the Washington Post headlined a major story on Tuesday:

As Americans push into a third winter of viral discontent, this season has delivered something different: Amid the deep polarization about masks and vaccines, amid the discord over whether and how to return to pre-pandemic life, a strange unity of confusion is emerging, a common inability to decipher conflicting advice and clashing guidelines coming from government, science, health, media and other institutions. The messages are muddled: Test or don't test? Which test? When? Isolate or not? For five days? Ten? Go to school or not? See friends and resume normal life, or hunker down again — and if so, for how long, to what end?

But with the omicron variant running rampant across the country, businesses are open and some offices have returned to at least partial in-person work. Sit-down restaurants are serving meals. Supermarkets and big box stores and pharmacies and most mom-and-pop neighborhood businesses are also open. But according to the Kaiser Family Foundation, "three in 10 American adults remain unvaccinated." And they are not a "monolith." "Their reasons, backgrounds, politics and willingness to eventually get vaccinated all vary," according to FiveThirtyEight. According to CNN, something like 60 percent of the unvaccinated are Republicans, but they're not clustered in red states. They're not wearing signs around their necks saying, "I refuse." They're everywhere. You can't avoid them.

That would have mattered a lot more with the delta variant, but not so much this time. Everybody is spreading the virus — vaxxed and unvaxxed alike. The unvaccinated get sicker, and their numbers account for the steep uptick in hospitalizations, which are putting excess pressure on medical professionals and hospital staff at all levels. But even if you're vaccinated and boosted and have had a "breakthrough" case of COVID, you're still vulnerable. In fact, usage of the word "breakthrough" is pretty much over. If you get it these days, you've got it, and that's that.

I used the IED metaphor because that's what this stage of the disease feels like: a war. But like our other endless wars, this one doesn't have a front line or an enemy you can see or any guarantees of safety if you follow guidelines approved by experts. In Iraq and Afghanistan, every soldier was an expert because nobody knew any more than anyone else. Remember "counterinsurgency" and "asymmetrical warfare?" How'd that work out for us? We lost three wars listening to "experts" who thought they could tell us exactly how to fight an unseen enemy.

Every trip outside your own home is a trip outside the wire. Every store, every restaurant, every office, every movie theater, every interior space is an IED alley in this conflict without borders. We're fighting yet another endless war against an unseen enemy : So get your shots, wear your mask and, as soldiers have said since Alexander's time, stay safe.

Read more on what we know about the omicron surge: