Everything sucks here: Liberal parents are losing their minds over COVID-related school closures

There's no one-size-fits-all key to getting through the omicron winter. Political horse-race lenses aren't helping 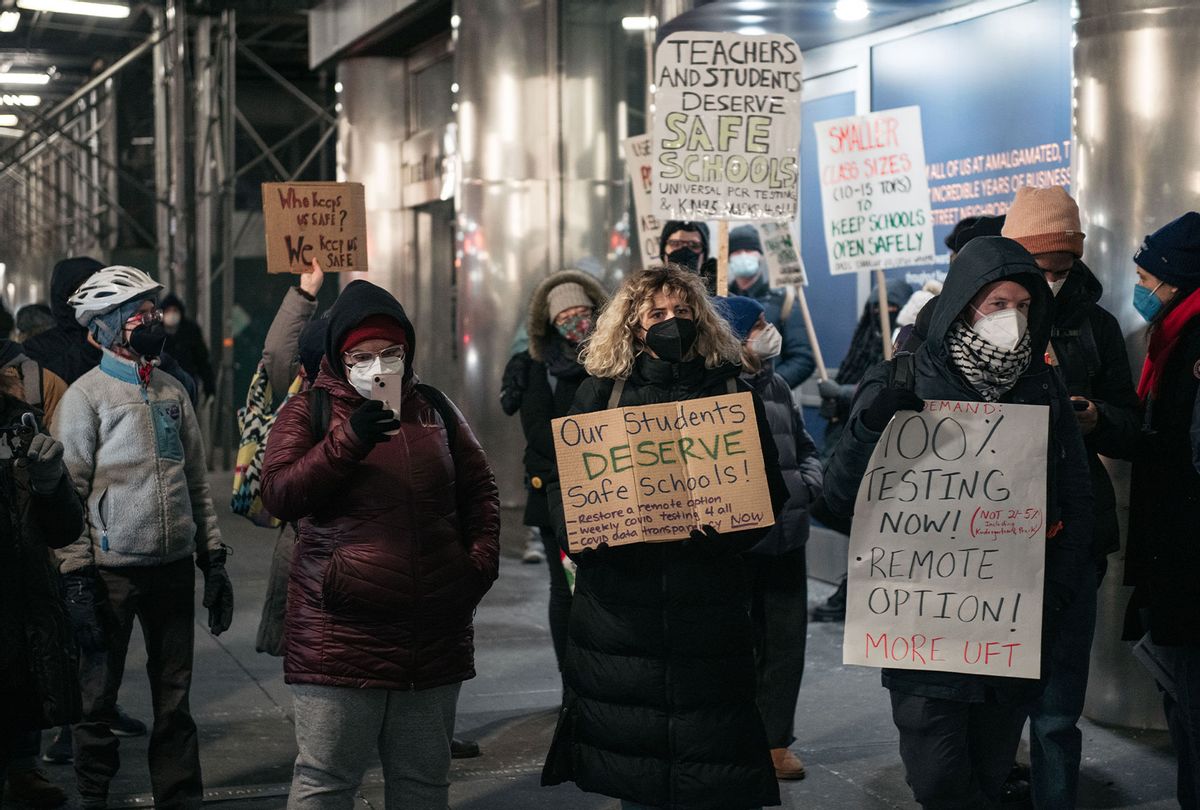 It would be ridiculous to complain at this late date that the pandemic has been "politicized." Was there ever a Platonic-ideal alternate America in which the arrival of COVID-19 was likely to be treated as a neutral public health question? Give Donald Trump credit, sort of: He understood from the outset that the pandemic would be a political issue — telling us way back in March of 2020 that he was eager to keep "his numbers" down — and one that clearly posed a threat to his chances of re-election. Nothing testifies more clearly to his enduring power over his supporters than the fact that Trump expanded his 2016 vote total by 7 million, after his administration's callous, incoherent and grotesquely incompetent mismanagement of the only major national crisis he faced as president. (Not counting the one he created himself after losing the election.)

As soon as it was clear that case numbers were out of control in the nation's big cities, the question of whether to keep the public schools open was political too. In New York, where I live, then-Mayor Bill de Blasio offered a poli-sci textbook example of an elected leader trapped between competing constituencies: He had social-policy wonks telling him the schools were crucial support systems for working families and at-risk youth (which of course is true), the teachers' union threatening a wildcat strike, conflicting advice from public health officials and enraged parents screaming at him from all sides. We'll never know how many people died unnecessarily because of de Blasio's Hamlet dithering in that traumatic month of March, but the number definitely isn't zero.

Fast forward nearly two years, and here we are again: the same, only different. Of course the circumstances have changed: We have vaccines and boosters and far more effective therapies, and we face a new variant of the virus that's far more infectious but a lot less likely to kill you. (New York has a brand new mayor, who seems even less willing to make tough decisions than the last one.) There's no national lockdown, and most stores, restaurants and other public-facing businesses are muddling along, assuming they have enough healthy workers available to open the doors. Even where schools have closed or reverted to remote learning, no reasonable person expects (or wants) that to continue for more than a few weeks.

You see what I did there, right? "Reasonable people," LOL! If the pandemic itself has become more manageable, and now seems more like a chronic or recurring public health issue than the end of the world, the supposed politics around school closures during the omicron surge have only gotten dumber and more deeply dug-in.

It's not that I don't feel compassion for anguished and frustrated parents — I'm one of them. No one thinks the remote schooling that dominated the 2020-21 school year was a huge success, and it was a lot more manageable for high school students like my kids. It can only have been agonizing for parents of younger children, especially in less privileged circumstances, to feel like their kids lost a year or more of academic and social progress they can never get back.

But that doesn't mean there's a one-size-fits-all solution to how we get through the winter of omicron. And it definitely doesn't mean that the difficult, complicated and highly personal set of choices that now confronts parents, kids, teachers, school officials and elected leaders in different ways in different parts of the country — all of us facing an unpredictable virus whose long-term effects remain poorly understood — can or should be boiled down to a partisan conflict or culture-war issue that has almost nothing to do with the real-life chaos on the ground in many schools.

RELATED: Our new "live with it" COVID strategy is devastating health care workers

When I read articles seeking to defend American Federation of Teachers president Randi Weingarten from right-wing attacks, or gaming out how the dispute between Chicago teachers and city government might play with midterm voters, the issue seems to be mostly about crafting magical formulas that might rescue Democrats from electoral disaster, not which of the imperfect options before us is best for kids, families, schools and teachers right now. That's horse-race journalism at its most destructive, when the question of how, when and where to educate children under some of the most challenging conditions imaginable becomes purely instrumental, either an asset or a liability in short-term political calculus.

Similarly, when the author of a Politico op-ed reports being called a racist by other Bay Area moms for wanting schools open (triggering a "political identity crisis," i.e., OMG am I a Republican?), and Chicago Mayor Lori Lightfoot implies that the teachers' union head might be a racist for wanting them closed, that's just a sign of full-on panic: Nobody has any answers, and in the grandest tradition of the left, supposed progressives revert to sanctimonious name-calling and specious claims to the moral high ground.

In the Facebook parents' group for my son's high school — which has 3,000 students and has had hundreds of omicron infections among students, teachers and staff — parents who are keeping their kids home through the surge have effectively been called paranoid snowflake babies who are confirming Republican stereotypes and dooming us all to the Trumpian Fourth Reich. But again, I think this comes out of a mostly laudable desire to do the right thing for your own family and the right thing for the larger society, in a situation where nobody knows that that is.

Speaking of my son's school:

I'm not outing anybody or anything at this point to acknowledge that the original Reddit post quoted therein, which went viral last weekend on various social media, was written by a student at the Bronx High School of Science, one of New York's famously controversial "specialized" high schools (where the sole criterion for admission is an SAT-style standardized test).

I think that student sums it better than I possibly could: There's no right or wrong here. Remote schooling sucks; conditions at Bronx Science suck right now too. Everybody is trying to do the best they can in a constantly changing situation and, in that case, in a hothouse environment where students — a great many of them first- or second-generation immigrants — are grinding out GPA points in hopes of an Ivy League admission.

Of course it isn't like that every single day, or at every school in every community. In fact the profoundly ordinary point I'm trying to make is that every situation, every school, every family and every student is different, and maybe we should cut each other a break instead of defaulting to totalizing rules or "no true Scotsman" fallacies — or asking But is it good for the Democrats? — about difficult individual decisions.

My son hasn't been going to school, for personal and family reasons that aren't anybody else's business. I have no right, and no desire, to judge other people who believe it's important for their kid to be in the building no matter how much of a shitshow it is or how little instruction is happening.

It would be easy — way, way too easy — to put all the blame for both the chaos and the dumbass bickering on Republicans, whose mendacity and hypocrisy around every aspect of public education is epic in scale. They have managed to link the imaginary shibboleth of "critical race theory," understood to mean any account of American history that might imply that any white people ever did anything bad, to the innocuous-sounding but deeply dangerous concept of "parental rights," and then somehow or other to the widespread (and entirely understandable) unhappiness that public education from March 2020 through at least June 2021 was a godawful mess in much of the country.

It's astonishing that anyone in my profession allows Republicans to pretend to care about the public schools, since it's not even a secret that the right's ultimate goal is to undermine them, discredit them, defund them and then destroy them entirely — although perhaps the more benevolent and far-sighted among them understand that some stripped-down version of three-R's education (which the private sector may be unwilling to provide) will still be necessary for future service-sector workers in the lower-caste districts, even after America has been Made Great Again.

Nonetheless, Republicans have successfully implanted the idea in their supporters — and, to a disheartening extent, among the general public — that the socialist liberals and their nefarious puppet-masters in the teachers' unions want all-remote school from now till doomsday, along with mandatory triple-masking at Buffalo Wild Wings and vaccine boosters loaded with Bill Gates' nanobots every two months, as decreed by the tyrannical Dr. Fauci, who apparently spent 40-odd years studying infectious diseases as part of an ingenious long-term scheme leading to his seizure of full dictatorial power.

In fairness, most Republicans don't say most of that stuff most of the time — at least, those who aren't Crossfit franchisees with evident personality disorders — but they're getting a lot cozier with it. The basis of Glenn Youngkin's Virginia gubernatorial campaign was essentially to carve up that message into little digestible bits, like the Caterpillar's hallucinogenic mushroom in "Alice in Wonderland," that could be served up at different strengths to different audiences. Although the conventional wisdom following a close election is never to be trusted, it appears plausible that Youngkin lured away some white suburban normies on the vague premise that Democrats had screwed up the schools with too much bureaucracy and technology and extended readings from Frantz Fanon.

But the garment-rending over the current school dilemma is largely happening among liberals, who have reacted to the Virginia election and the looming prospect of Republican victory in the midterms in time-honored fashion: with widespread panic and confusion, along with a misguided desire to "pivot to the center" and placate imaginary middle-ground voters with explanations, apologies and heartfelt confessions. If you feel compelled to announce that you're not in favor of endless school closures and you don't think white children should be sent to re-education camps, you've already lost the debate.

It's admittedly difficult to stand on the courage of your convictions when you don't have much of either. That may well be a problem our children are forced to solve. But not right now.