A Zoom of one's own: Leaving my job helped my mental health — and my mission

When I didn't complete a new requirement for online teaching, my job got canceled. Now I'm teaching on my own terms 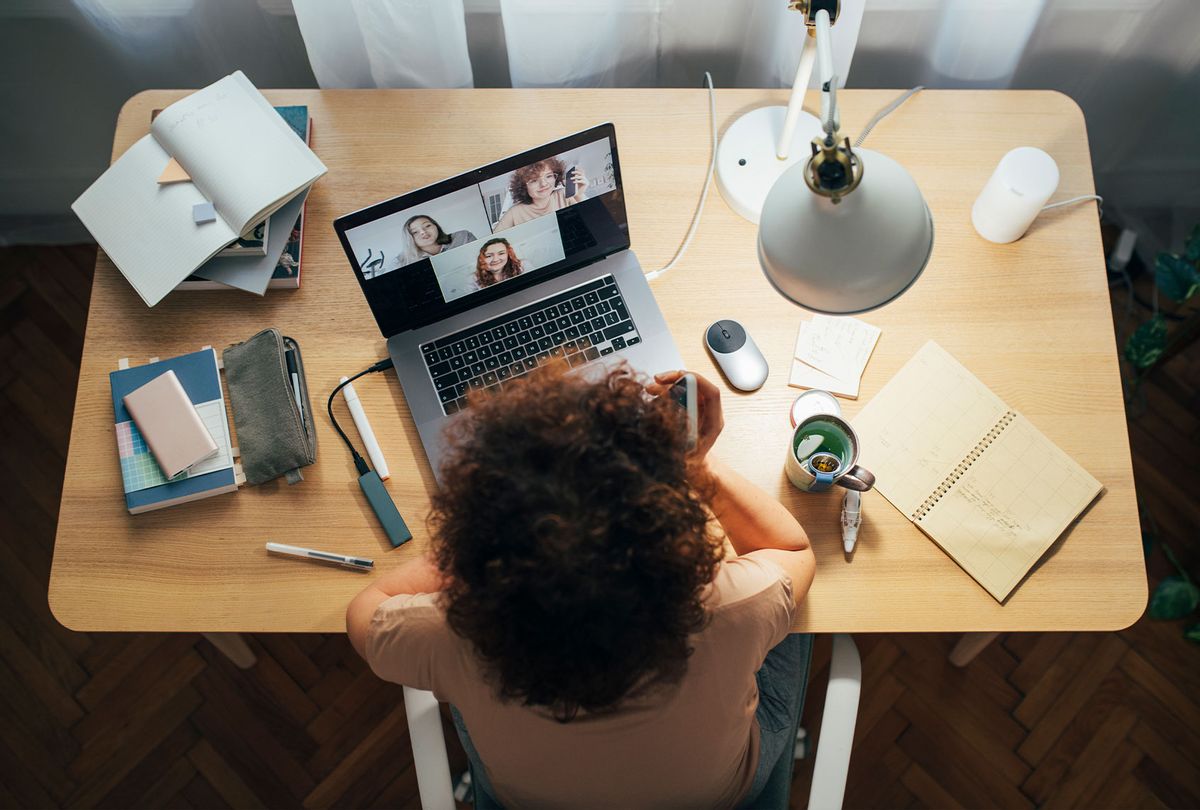 It's too soon to tell if 2022 will continue "The Great Resignation," where millions of Americans, a record number, left their workplaces in 2021, wanting more money, flexibility or fulfillment. Though my salary was low, I never thought I'd join their ranks.

Why should I? I adored being a writing professor at a local university blocks from my home. For a quarter century my students walked me home from the crowded, energetic evening classes that made me feel hip and useful. Unlike my frustrating publishing rejections and erratic contract assignments, this gig was steady: I showed up, they paid me. They took taxes out and even gave me a 401k and teaching award. My staid Midwest father, who'd sneered that I was "freelance everything," said "Finally, a real job!"

When the coronavirus hit Manhattan, I was heartbroken my undergrads were getting sick and thrown out of their dorms as their jobs and internships dried up. Several fought to return to their homes amid travel bans and chaos. A struggling technophobe, I was determined not to let them down. I dressed up and put on makeup to Zoom from my laptop, thankful to still be working, amazed how intimate remote learning could be.

RELATED: The sobering truth about quitting my job: I was addicted to high-stress, nonprofit work

I'd promised my students "writing is a way to turn your worst experiences into the most beautiful," but now the stakes were higher. Their evocative essays, heightened by the pandemic, exposed issues from sudden poverty, racism and homelessness to anti-Asian and anti-Semitic violence to lack of childcare. One mom held her infant, trying to get Wi-Fi from her hall closet. I was moved by their dedication to showing up despite obstacles as everyone struggled through escalating traumas.

To combat budget problems exacerbated by Covid, the school hired corporate consultants. Layoffs, pay reductions and union complaints about executive salaries followed. Shortly after, they sent a group email mandating teachers take a 20-hour remote course to master Canvas, a digital learning management system in "asynchronous mode." That meant you post and access lectures, assignments and homework on discussion boards, but don't actually have to meet. The "customized portals" were designed to retain foreign-based pupils in other time zones (though this same system crashed twice in December, screwing up college finals internationally.) It was owned by a billionaire CEO of a private equity growth firm. Preoccupied by helping my students craft and publish poignant first person pages on a one-to-one basis, I'd missed the corporatization of academia.

For an author with a creative writing degree and brain whose operating system was synchronized by confessional poetry and Bob Dylan lyrics, this tech terminology was gibberish. A part-timer, I juggled a book deadline and led two Zoom classes for the university, along with other private seminars on the same platform.  After a week grappling with the convoluted lingo, trying to translate "custom integration with SIS and open cross-platform compatible LTI," I gave up, and begged to continue Zooming. When I didn't complete the new requirement, the school's software automatically cancelled my already-full fall roster. I was shocked to be annulled by an algorithm. But I rallied, deciding to teach on my own that term, posting fliers on social media. The response was heartening; so many people signed up I could afford more visits from top editors. Still, I expected to go back to normal the next semester. That didn't happen.

RELATED: I'm not going back to work in restaurants — but only because I have a choice

I couldn't return to my in-person (now masked) classes without completing the computer proviso, in case the virus threw everyone back online. It was hard seeing new teachers half my age with little experience posting social media photos in the rooms where I'd taught. A coworker suggested I pay an IT expert to do the 20-hour course for me. But as someone who only worked at the university four hours a week and made them ten times my salary in the tuition they charged for classes I invented, I wouldn't fake it. They'd called me a "distinguished" professor with 25 years of loyal service. I couldn't wrap my head around ruining classes that were better on Zoom to fulfill a post-requisite from business outsiders who didn't teach or write. I assumed they'd excuse the unnecessary computer requirement since my classes were overstuffed with undergrads paying $4000 for the credits during a financial crisis. I assumed wrong. I didn't hide my disappointment.

Reading a former student's assignment in the New York Times about why she'd never love a job again, I was fascinated. She'd been employed at a tech firm where a higher up was sexually harassing her. When she reported him, the company protected itself, claiming he'd been punished while insisting they still work together closely. Betrayed and disillusioned, she left. Despite the vast differences — I was twice her age and wasn't harassed — I related to her story. Naively I thought my close connection to the school made me more than a cog in their machine.

"Most institutions run on a bureaucracy of groupthink and self-protection," a colleague reminded me. I was privileged to have choices denied essential workers, who put their lives on the line for employers who didn't protect their health or safety. I'd advised students in art fields to get a day job or side hustle to pay bills, citing my teaching gig. It felt like I failed my own Plan B.

In her 2021 book "Work Won't Love You Back: How Devotion to Our Jobs Keeps Us Exhausted, Exploited, and Alone," labor reporter Sarah Jaffe exposed the dark side of employment in a capitalist society as a power struggle over time and conflicting goals. Yet that wasn't true in my family. My parents' professions led them out of poverty, as if achievement were redemption. My mother, orphaned at 13, put my father, a Lower East Side street kid, through medical school as a secretary turned office manager. A physician until his 80s, his title became his calling, as he championed doctors of color who were mistreated at his hospitals and took care of low-income patients for free. He made time to teach, waking up at 5 a.m. to make rounds with interns. Like him, I cherished the dual career I wasn't ready to relinquish. Yet I didn't know how to stem the hurt and change the narrative.

Then I read a tweet I found enlightening: "Don't ever attach yourself to a person, place, company, organization or project. Attach yourself to a mission, a calling, a purpose ONLY. That's how you keep your power and your peace." It was by Erica Williams Simon, author of "You Deserve The Truth: Change the Stories that Shaped Your World and Build a World-Changing Life," who'd left a high-level position to find more satisfying work solo.

That helped me see I wasn't a powerless victim or a martyr. I was just too emotionally attached to my long-term employer. At first, I feared not having a personal plan (aside from affording to stay in my city.) Then I realized I always knew what I wanted: teach aspiring writers who felt marginalized to find their voice and place in the publishing world. It took me until my forties to make a living in my field. I'd wanted my past challenges to empower my students.

Over the last 20 months teaching on my own, I pressed the same Zoom buttons to make faces of all ages and backgrounds appear. New York neighbors mixed with early risers in Vietnam, Hong Kong, Malaysia and India looking bleary-eyed before dawn, light streaming through windows and balconies. Night owls from Brussels, France, Italy, Israel and Egypt — some sitting outside in darkness — stayed up late to meet the editors and agents I'd invited to join us. It was like an airport full of international travelers meeting on my small screen. "You're better than caffeine," one European pupil commented in the Chat.

RELATED: Rapture in the Zoom

When I Zoomed in from Michigan on a visit to my mom, a Hong Kong student emailed, "Welcome to the gig economy life. You're a digital nomad too."

Surprisingly, I fell in love with my new brand of online learning. At the university, only the officially registered were allowed a seat in my classroom. I couldn't make exceptions to help former students, those with  scheduling conflicts or special needs from a disability, financial or childcare limitations. Now it was my choice who could attend. I was able to invite more than a hundred diverse students who were in need, or going through crises, to audit, many who chronicled experiences with Black Lives Matter protests and Covid inequities. It was gratifying to watch their brave timely debuts in top newspapers, magazines and books. Someone who depicted the poverty and homophobia he'd faced was offered a staff writer position. A 17-year-old West Coast high schooler who'd Zoomed in for 15 weeks said his new clips led to a full Stanford scholarship. Two former students, in Texas and Michigan, launched debut children's books. A single mother of two landed a six-figure deal with Random House for a memoir about racism and gentrification. I was beyond proud, feeling blessed that I could transform my past mistakes into inspiration for a younger generation.

While I've upgraded my Zoom account in case Omicron continues, I'm remaining open for a mix of face-to-face and electronic education in the future. Either way, I've learned that not relying on one job or institute can enhance a mission that means more.