Carlson described the man as simply being a “disabled veteran,” downplaying the serious charges against him 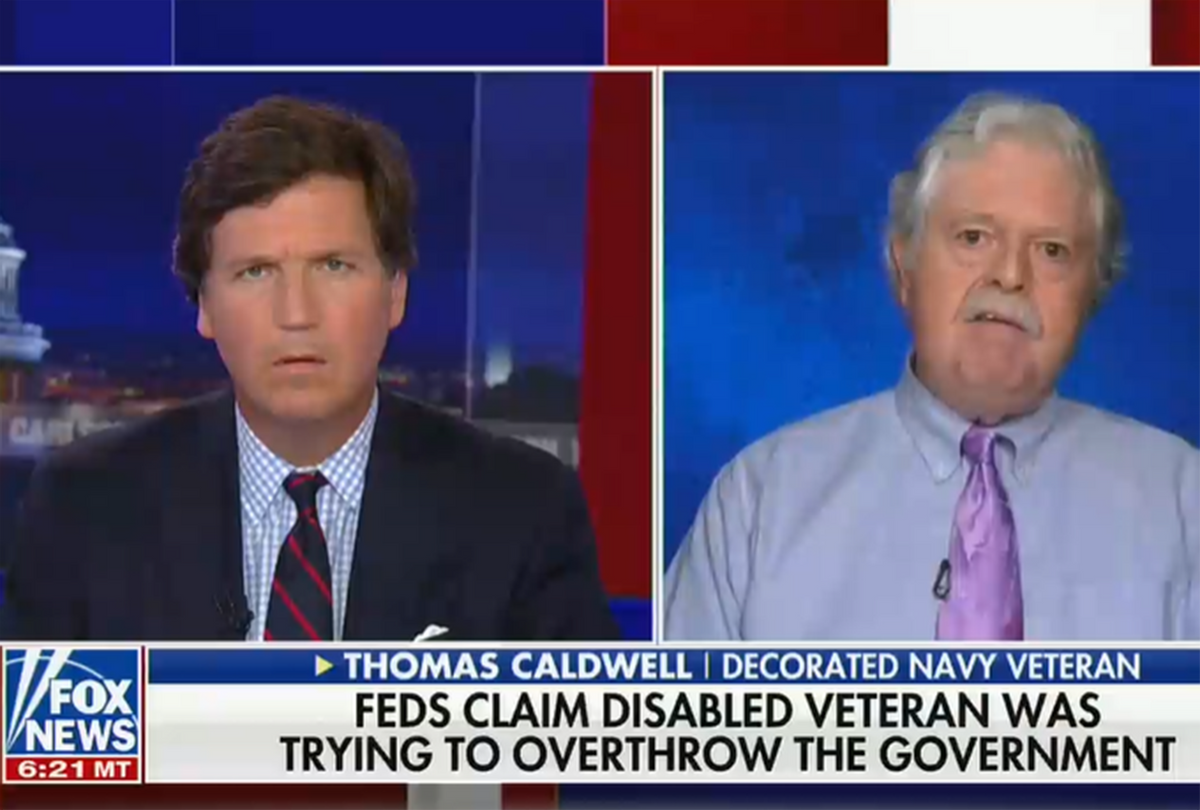 Fox News' Tucker Carlson has repeatedly hosted a man said to be a member of the Oath Keepers and who is now facing sedition conspiracy charges for his participation in the insurrection on the U.S. Capitol.

According to Media Matters, Carlson interviewed Thomas Caldwell, of Berryville, Virginia, on his Fox News primetime show and his Fox Nation podcast given him and his wife a platform to depict themselves as "victims of overzealous prosecution for the events of January 6."

During their multiple discussions, Carlson described Caldwell as simply being a "disabled veteran" and seemed to downplay the potential that he had serious criminal exposure.

However, the indictment offers details that paint a relatively different picture of Caldwell's involvement. Caldwell, who reportedly goes by the name "Commander Tom," was charged along with nine others for involvement in the far-right extremist, anti-government organization. The indictment alleges Caldwell marched to the Capitol and was "stationed" outside of the federal building on Jan. 6.

"As noted in the indictment, Caldwell was stationed outside Washington, D.C., on January 5, standing ready to distribute weapons to his fellow militia members at the direction of Rhodes. He allegedly helped coordinate the Oath Keepers' so-called "quick reaction force." The indictment states that the militia had "amassed firearms on the outskirts of Washington, D.C., distributed them among 'quick reaction force' ('QRF') teams, and planned to use the firearms in support of their plot to stop the lawful transfer of presidential power."

The indictment continued with more allegations against Caldwell and members of the organization. "The government's case claims Caldwell sought boats to assist the QRF, saying he wrote in a message that they could have "heavy weapons standing by, quickly load them and ferry them across the river to our waiting arms,'" Media Matters reports. "It also alleges that 'on January 5, 2021, Caldwell and others drove into Washington, D.C., around the Capitol, and back to their hotel in Virginia' where the Oath Keepers had stockpiled weapons. The indictment says that 'Caldwell described the trip as 'recce,' or a reconnaissance mission.'"

The indictment also contends, "The QRF teams were prepared to rapidly transport firearms and other weapons into Washington, D.C., in support of operations aimed at using force to stop the lawful transfer of presidential power. The QRF teams were coordinated, in part, by Thomas Caldwell and Edward Vallejo."

The latest report comes amid charges filed against Caldwell on Thursday, January 13. If convicted on sedition charges, which are common in cases involving Caldwell could face a maximum of 20 years behind bars.