COVID walkouts: Why Omicron is pushing teachers and students to leave the classroom 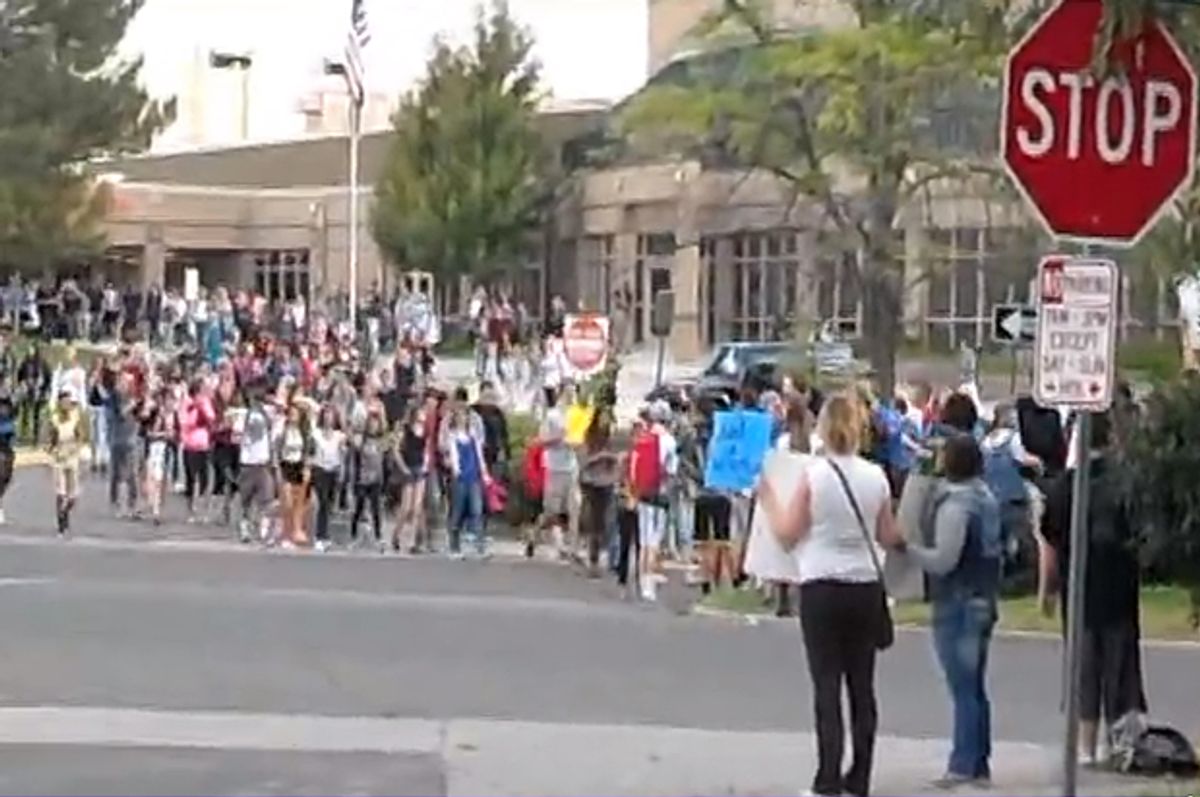 Thousands of U.S. students and teachers are organizing walkouts and work stoppages over their schools' lack of COVID-19 precautions – a development that comes amid an unprecedented upsurge in coronavirus cases as the the Omicron variant tears through the nation.

On Tuesday afternoon, hundreds of New York City school students flooded out of class midday in protest of their school's choice to continue in-person learning despite the uptick in COVID-19 cases over the past month, according to The New York Post. The demonstration, which saw especially high rates of participation from Brooklyn Tech High School, Stuyvesant High, and Bronx Science, called for an immediate transition to remote learning until the pandemic subsides. Student activists are also demanding that their schools redouble routine testing, health-screening, and social distancing requirements to protect both themselves and staff.

The demonstrations come at a time of uniquely low student attendance throughout the city. According to the New York Department of Education, just 45% students showed up to class last Friday – roughly half the typical turnout. Several student demonstrators told AMNY that they refused to attend classes because they were wary of bringing the virus home to their family members, many of whom are immunocompromised.

On Tuesday, the city reported over 7,000 student cases of coronavirus, along with roughly 1,200 amongst staff. Since many New York City schools operate in close quarters, students and teachers have warned of the high potential for outbreaks. Despite these fears, Mayor Eric Adams, who assumed office at the start of January, has refused to impose school closures, stressing that the city "must learn to live with COVID."

Theo Demel, a 14-year-old eight-grader who helped organize the demonstrations, told Salon Adam's stance is wrong-headed, suggesting that the mayor is downplaying the virus for political reasons.

"I've spoken to Mr. Adams. He's a politician," Demel said in an interview. "His approval ratings will go down, probably. And on a national level, it might look like he doesn't have it under control – which frankly, he doesn't."

In Columbia, Missouri, over 120 Hickman High School students coordinated a similar effort, staging a walkout in protest of the Columbia Public Schools' decision to suspend its mask mandate, according to The Columbia Tribune.

The board's decision, handed down on January 4, reportedly came amid a significant uptick in cases throughout the state's school system. According to district data, the 14-day rate per 10,000 people in district boundaries jumped up last week from 123 to 139 in one day. This week, KOMU reported that roughly 187 students are currently out sick due to COVID.

An online petition signed by thousands of students is asking the board to "reevaluate and discuss [its] COVID safety measures."

"Our community has reached record high active cases for four days in a row," petition organizers wrote to the board. "You are not following the guidance of the health department as you state in your mass communications."

In Boston, a similar petition was launched by William Hu, a senior at Boston Latin School, amid an "extremely concerning" outbreak first identified at the school three weeks ago, according to The Boston Globe. The petition, backed by over 7,200 signatories, encourages Massachusetts Governor Charlie Baker to permit students the option of remote learning until the spread of Omicron peters out.

RELATED: More than a year into the pandemic, our kids are not alright

"The oppressive adamance of Governor Charlie Baker's words 'We count in-person school as school' is a horrifying example of a dazed and confused education system. Schools aren't even given the option of turning remote," Hu wrote in his petition. "What is Governor Baker actively condoning here? Are school districts so engrossed in maintaining 'normalcy' that they are unwilling to make a change for the health and safety of our communities?"

Boston Mayor Michelle Wu likewise told an NBC affiliate that Baker's policy is too rigid and that she supports a remote option, given that 200 staff are already out sick due to COVID. "Many of these schools are already preparing to offer remote learning whether or not it gets counted by the state," Wu said.

The rash of student demonstrations comes at a time of intense tug-of-war between teachers and districts throughout the country, who remain sharply divided on whether to keep schools open as COVID-19 cases soar.

This conflict first came into the national spotlight last week, when the Chicago Public Schools (CPS) shut down classes after the Chicago Teachers Union (CTU) overwhelmingly voted to suspend in-person instruction, opting for remote teaching in light of COVID health concerns. The vote, supported by 73% of the union's 25,000 members, continues to affect roughly 360,000 students and staffers throughout the city. The union is arguing that CPS has failed to provide adequate masks, testing, and health screening measures to both teachers and students, creating a breeding ground for an outbreak in the city's schools.

Chicago Mayor Lori Lightfoot, who on Tuesday tested positive for COVID-19, has argued against remote learning, saying that it comes at too high a cost for parents.

On Wednesday, Lightfoot and the CTU reportedly reached an agreement ensuring certain slightly higher closure thresholds and improved testing requirements, but the mayor did not allow the union to make remote learning an option, which was the union's chief demand. The union, for its part, called the deal "more than nothing, but less than what we wanted."

Though Chicago has made the majority of headlines this past week, it's not the only city where teachers have led demonstrations.

Last month, at least 40 teachers at Olney Charter High School in Philadelphia called out sick after a 17-year-old senior, Alayna Thach, died due to COVID, arguing that the school had not taken enough precautions to safeguard its students and staff from contracting the virus.

Sarah Kenney, a 10th grade African American History teacher at Olney, told The Philadelphia Inquirer that "Alayna's death should have been a wake-up call for Olney Charter's corporate managers.

"We need a more robust COVID mitigation strategy, which should include testing, more nursing staff, a plan for physical distancing in the lunchroom, more stringent mask compliance, and a vaccine clinic on premises," Kenney said.

​​Aspira, Inc., the corporation that manages Olney, responded that teachers were "demanding additional safety protocols without citing any relevant detailed claim – and, despite the fact that the school administration has taken thorough open measures to protect the health and safety of students and staff."

Olney shortly transitioned to remote learning following Thach's passing, stating that it would remain remote until the week after Christmas break.

Meanwhile, in Oakland, California, students and parents are currently expecting their second teacher sick-out after a coalition of 503 teachers spanning twelve schools called out sick last Friday in solidarity with students aggrieved by their school's lack of COVID safety.

According to The San Francisco Chronicle, classrooms have thinned out dramatically in recent weeks, with high rates of absenteeism amongst both students and teachers. Students in the district have also signaled that they are prepared to go on strike until their safety demands are met, writing in a petition backed by over 1,200 signatories that schools should transition to remote learning unless they provide students with KN95 masks, more outdoor spaces, and administer semi-weekly PCR and rapid tests.

Though a large swath of the press has indicated that parents are averse to school closures, a recent Axios poll found that 56% support remote learning to prevent the spread of COVID.