Meet the "it" condiment that belongs on your shelf

Matbucha has a long history in restaurants and home kitchens, but it is growing in popularity 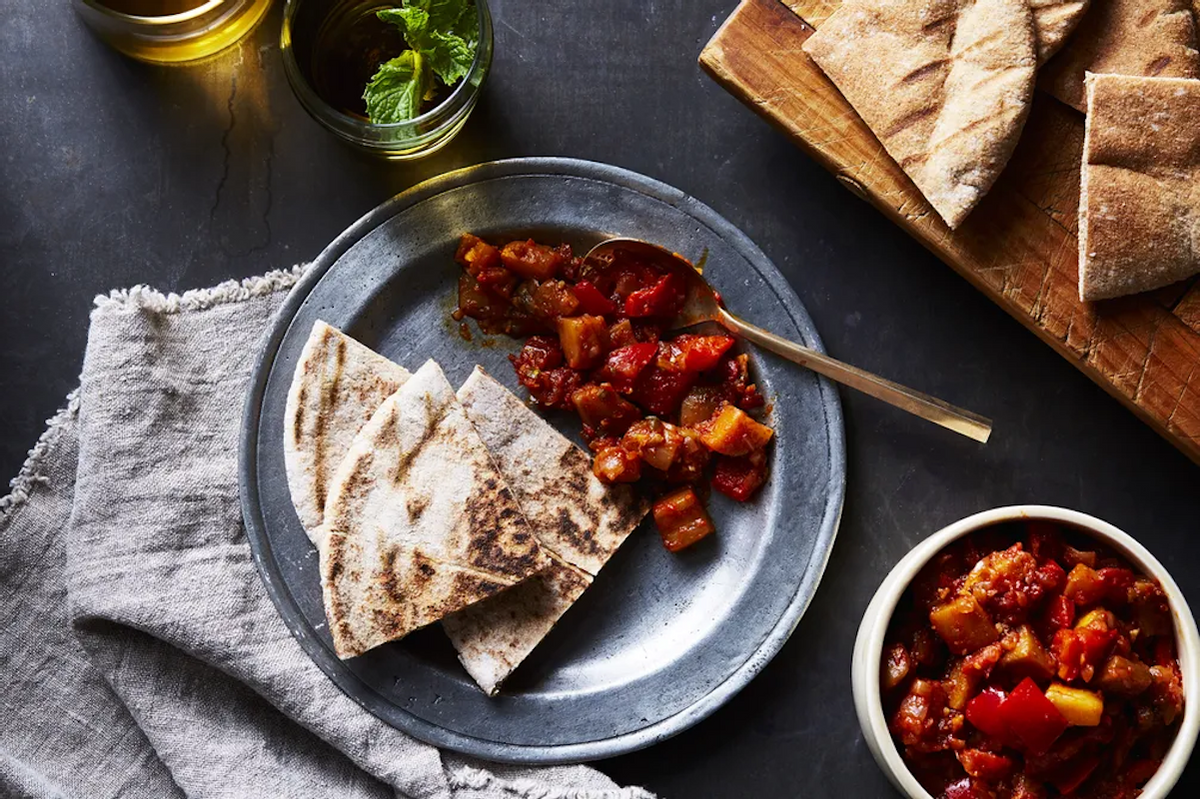 There can never be too many condiments. Tomatoes are the vehicle that often drives these concoctions — salsa, harissa, and ketchup, to name a few — to stardom. Another tomato-based sauce, matbucha, is starting to gain more mainstream popularity as it's increasingly sold premade. Of course, the zesty Moroccan mix of tomatoes, red peppers, olive oil, garlic, and spices has a long history in households and restaurant kitchens, but this relative newcomer to the manufactured condiment game certainly is worth paying attention to.

Matbucha likely originated in the cuisines of the Maghreb region in North Africa, which includes countries like Egypt and Tunisia, but it's most strongly associated with Moroccan cuisine. Matbucha means "cooked" in Arabic, and it is made by slowly cooking down fragrant roasted garlic, juicy tomatoes, oil, and sweet and/or hot peppers with a selection of North African spices that change from cook to cook — cumin, paprika, and turmeric are all likely to make an appearance. Its flavor is a balanced union of acidity, heat, saltiness, and sweetness. In Israel, where many Moroccan Jews have roots, matbucha is a common picnic and breakfast accompaniment to cooked meals, sandwiches, and barbecue, beloved by myriad ethnicities within the country. It's also a frequent member of the salatim, or salads, in a meze spread you'd find at a Mediterranean restaurant. Its popularity in Israel is perhaps best showcased by the fact that it's manufactured by a number of local brands and sold at grocery stores. In the U.S., it's been primarily a home-cooked indulgence — until now.

While different matbucha products by Israeli brands and American kosher manufacturers can be found online at U.S.-based kosher supermarkets, in 2021, a few U.S.-based independent brands started experimenting with selling premade "boutique" matbucha. Curiously enough, it's matbucha's second spin on the U.S. market: It was once manufactured by larger condiment brands Sabra and Pikante, but both have ceased production of matbucha.

This time around, brands are giving it an artisanal spin. One of them is New York Shuk, owned by Israeli couple Leetal and Ron Arazi. The two launched their brand with Middle Eastern staples better known to American customers, like harissa and za'atar, but in recent years have expand their assortment to numerous dry spices as well as matbucha. New York Shuk currently offers a classic matbucha made with tomatoes, Hatch chile peppers, garlic, and paprika, as well as a more unorthodox option featuring olives and mint, which aren't common ingredients in the classic recipe.

"The Middle Eastern pantry has such a rich culinary heritage and breadth of flavors, beyond the two or three that exist commonly on store shelves," said Leetal. Matbucha, she said, is especially versatile since it works perfectly as a spread — try it on a piece of freshly fried malawach — and as a simmering sauce for stews. Purists like nothing more than dipping fresh bread into it. Ron still remembers his mother's homemade version: "When her matbucha was ready, she would spoon it into jars, then we would dive in to the cooking pot, warm challah in hand, to sop up every leftover bit."

On the other side of the country, GarLic It, a Bellevue, Washington, brand dedicated to all things garlic, recently launched its own spicy matbucha. The condiment also has been recently made available for online ordering by the Butcherie, a Massachusetts-based kosher online store.

GarLic It founder Lance Kezner discovered matbucha at a friend's house. "She made it to go with the meal, we tasted it, and we were hooked," he said. Looking at the condiment through a garlicky lens, he played around with a recipe for over three months, trying 10 different versions, before launching the final result a few months ago. It features, among olive oil and spices, caramelized garlic as a base.

As for how to use matbucha, the sky is really the limit. The condiment's spicy, savory nature will punch up even the most basic of avocado toasts. Use it as a base for shakshuka instead of canned tomatoes. Give it a go in a Tunisian sandwich, or casse-croûte — a bun stuffed with tuna, hard-boiled eggs, pickles, and preserved lemons. Try it in a wintry stew instead of tomato paste or harissa, or spoon over scrambled eggs in the morning. You certainly don't have to use it exclusively with dishes that slant Middle Eastern or Mediterranean: "Wrap Brie with puff pastry, top with matbucha, and bake," suggested Kezner. "Or make a Greek omelet with feta, minced red onions, and Kalamata olives." You really can't go wrong.