Oath Keeper returned to Capitol on Jan. 7 for “recon” as group plotted weeks of battle: prosecutors

Group stockpiled weapons, ammunition and 30 days of supplies at a nearby hotel with an eye on Biden inauguration 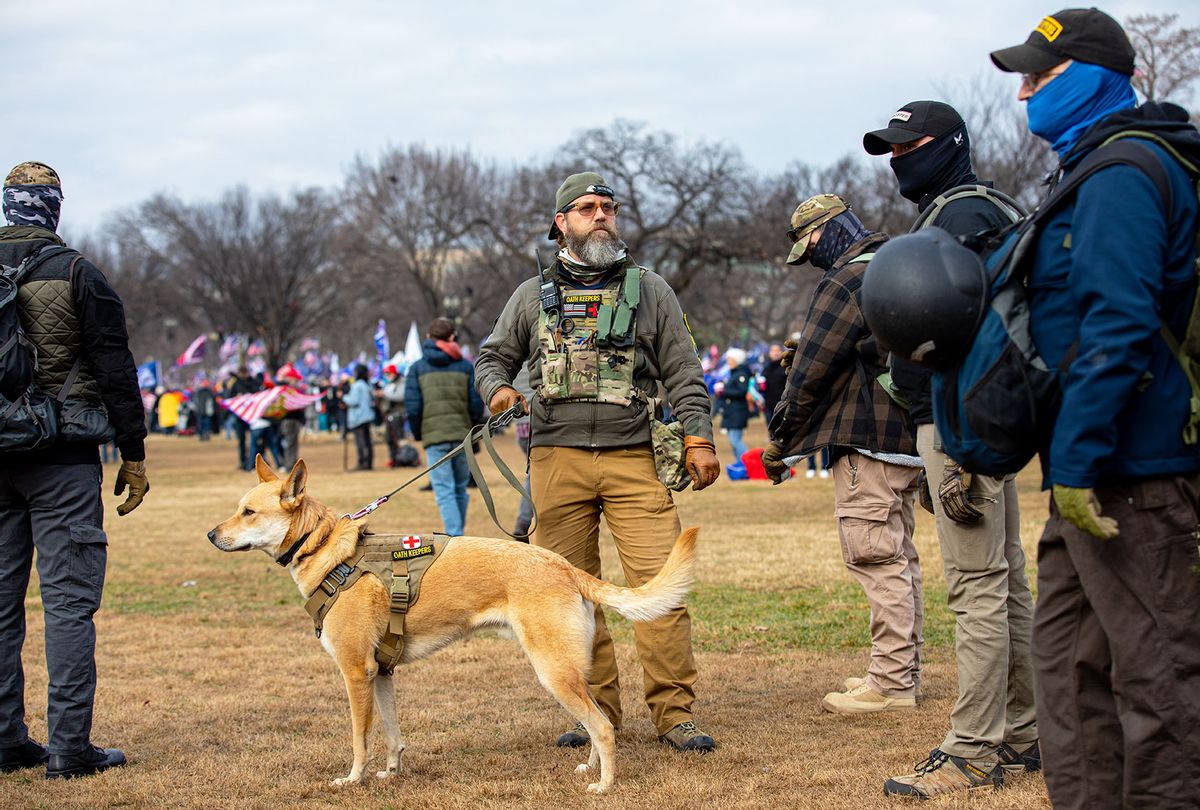 A member of the Oath Keepers returned to the Capitol a day after the deadly Jan. 6 riot for "recon" as the group, which had stocked up a cache of weapons and ammunition, plotted to battle authorities for weeks, prosecutors said in a court filing.

Ed Vallejo, a 63-year-old Arizona man who was one of 11 Oath Keepers charged last week with seditious conspiracy and other crimes for their alleged efforts to use a campaign of violence to prevent President Biden from taking office, messaged his alleged co-conspirators after the Jan. 6 riot was dispersed to declare "we'll be back at 6 am to do it again," according to prosecutors. He returned to the Capitol on Jan. 7 and told others he was "waiting for orders from [Oath Keeper founder] Stewart Rhodes," who was also indicted last week.

"We are going to probe their defense line right now 6 am they should let us in. We'll see," Vallejo said in a Signal message to other members, according to the court filing.

Vallejo's team continued to reach out to Rhodes for "next steps" after the riot as other members "continued to make plans to stop the presidential power transfer, amass additional weaponry and tactical gear, and prepare themselves to deploy their arms, if necessary, to stop the inauguration of a new president," prosecutors said.

Prosecutors said Vallejo and other members of the group's "quick reaction force," or QRF, prepared to do battle in the city for weeks. The group stockpiled 30 days worth of supplies at a Comfort Inn in nearby Arlington, Virginia, as well as "at least three luggage carts' worth of gun boxes, rifle cases, and suitcases filled with ammunition."

"A second QRF team from North Carolina consisted of four men who kept their rifles ready to go in a vehicle parked in the hotel lot," prosecutors said in the filing. "Later, Vallejo and other members of the Arizona QRF team wheeled in bags and large bins of weapons, ammunition, and essential supplies to last 30 days."

Prosecutors also said that members of the group "attempted, but failed, to launch" a drone for "recon" purposes during the riot.

Vallejo played a "central role in the use of force in this plot" and after the riot "continued to look for ways to support the co-conspirators' mission," prosecutors said.

The quick response teams were ultimately "unnecessary," prosecutors said, because the group and hundreds of other Trump supporters were able to get inside the Capitol without additional support.

Prosecutors in the filing asked the court to keep Vallejo detained pending trial, noting that he continued to defend the attack until days before his arrest.

"That Vallejo's co-conspirators did not activate him on January 6 does not mitigate his dangerousness," prosecutors said. "Vallejo traveled across the country and staged himself near the congressional proceedings ready to transport firearms and equipment into the nation's capital. That is what makes him a danger. And there is no evidence that he has renounced violence or that he no longer believes in the necessity of guerilla warfare after January 6."

Vallejo is scheduled to appear before a judge on Thursday to determine whether he will be released pending his trial.

Vallejo is one of 20 Oath Keepers charged in connection to the riot and one of 11 who face charges of seditious conspiracy.

Prosecutors say Rhodes began recruiting members and "encouraging them to forcibly oppose the lawful transfer of presidential power" days after the election. Rhodes predicted a "civil war" and detailed the group's plans to block Biden from taking office. Rhodes told members that Jan. 6 was a "hard constitutional deadline" to stop Biden from taking power and warned that if Biden did take office the group would "have to do a bloody, massively bloody revolution" against the new administration, according to court filings.

Rhodes directed members to go to the Capitol around 2:30 pm on Jan. 6, moments before the group joined the mob and broke open the Capitol doors, prosecutors say. Vallejo repeatedly sent messages offering to assist. Half of the Oath Keeper members unsuccessfully tried to breach the Senate chamber while the other half unsuccessfully hunted for House Speaker Nancy Pelosi, according to the filing. The members were ultimately "rebuffed" by law enforcement and left the Capitol.

The group continued to exchange messages plotting a potential violent attack on the presidential inauguration, according to the filing. Rhodes purchased "thousands of dollars worth of firearms, ammunition, and equipment" and summoned other members. On Jan. 20, Rhodes messaged members to organize local militias to forcibly resist the new administration.

The Oath Keepers are the first to face seditious conspiracy charges in connection to the riot, which may damage a popular conservative talking point that the Jan. 6 event cannot be described as an "insurrection," only as a "protest."

"How many of the participants in that insurrection had been charged with insurrecting? With sedition? With treason? Zero," Fox News host Tucker Carlson said on the air last year.

"The Justice Department is not going to deliver on this narrative that they peddled for eight months, which was that this was an insurrection, these people are traitors, that they engaged in sedition," journalist Glenn Greenwald told Fox News host Laura Ingraham in November. "No one is charged with any of those things."

Ingraham made the same point earlier this month ahead of the Jan. 6 anniversary.

"Do you know how many people have been charged with inciting insurrection or sedition or treason or domestic terrorism as a result of anything?" Ingraham asked. "Zero. Exactly — just like Robert Mueller never indicted anybody for criminally conspiring with Russia."

Read more on the Oath Keepers and Jan. 6: