The eruption of Hunga Tonga–Hunga Haʻapai, an underwater volcano, appears to be the largest in three decades 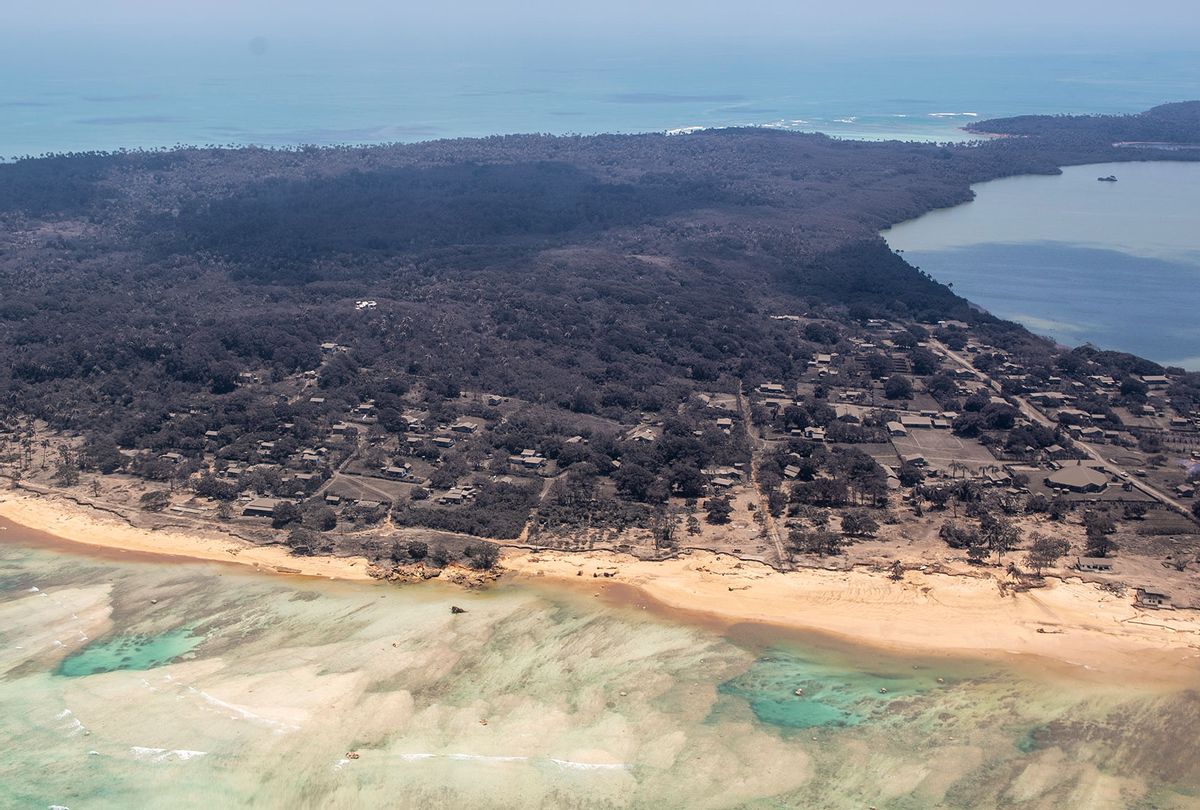 In this handout photo provided by the New Zealand Defense Force, an aerial view from a P-3K2 Orion surveillance flight of heavy ash fall on January 17, 2022 Nomuka, Tonga. A 5 Squadron crew work on board whilst flying overhead to provide vital information to send back to MFAT and various other government agencies. Tonga was struck by a tsunami caused by an undersea volcano erupting in the Pacific Ocean on January 15th. (New Zealand Defense Force via Getty Images)
--

Tonga is cut off from the world. In normal times, the small island nation in the South Pacific, with a mere 100,000 people living there, is a remote and peaceful chain of islands, some more populated than others. Most Tongans live on the island of Tongatapu, which is surrounded by bright blue lagoons and limestone cliffs covered in greenery.

Yet at the time of this writing, the world does not have a complete picture of what Tonga currently looks like. Even though the news cycle has been full of unprecedented natural disasters — from hurricanes and wildfires to Texas blizzards — there is now, added to the list, the unexpected eruption of an underwater volcano.

The Hunga Tonga–Hunga Ha'apai, a 13-mile-wide behemoth that exploded some 65 kilometers north of Tonga's capital Nuku'alofa, has left much of Tonga either cut off from the rest of the world or severely limited in its access — severing internet and phone cables that allow communication in real-time.

Belching volcanic ash nearly 20 feet into the air, the underwater volcano sent tsunami waves all the way to the Pacific Coast and released an atmospheric pressure wave all over the world. The eruption was heard hundreds of miles away, while the US tsunami warning system registered it as a 7.6 magnitude earthquake. It is believed to be Earth's largest volcanic eruption in roughly three decades, and exploded with the force of 10 megatons of TNT.

Residents are suffering as a result. Red Cross officials report that three of Tonga's outlying islands have suffered severe damage from the 49-foot waves caused by the eruption, including the destruction of most houses and other structures on the islands. As mentioned, the eruption also knocked out underseas internet cables, cutting off Tongans from the world digitally just as the polluted air and water did so physically. Online video has trickled out of Tongans fleeing to higher ground, or describing a hellish gray landscape; that exposure to volcanic debris comes with serious health problems.

RELATED: How to stay warm when you don't have electricity

"The primary health concerns during volcanic eruptions are similar to wildfires, and include respiratory distress, eye and skin irritation, contaminated water supply, the intensification of chronic illnesses when access to medicine is compromised," writes Direct Relief, a nonprofit humanitarian organization.

Yet it may be challenging to actually bring relief to those who need it. In addition to being cut off from the world through the brute force of the eruption, the Tongans are also confronted with questions over how to accept relief amid the COVID-19 pandemic, which the island nation has warded off through vigilant border control. Indeed, by restricting island access, Tonga did not record a single COVID-19 case from the start of the pandemic until November 2021.

"We are very cautious in putting people in," Yutaro Setoya, the head of the World Health Organization Country Liaison Office for Tonga, told the ABC. "The government is discussing if there's a need to have international human support personnel to come here or we can provide more support domestically."

At the time of this writing there are three confirmed deaths due to the eruption. These include a British woman, 50-year-old Angela Glover, and two locals, a 65-year-old woman and a 49-year-old man.

Despite the deaths, scientists believe that Tonga could have suffered a much worse fate. As Voice of America News (VOA) reported, the country is practically on top of the volcano.

"That's the million-dollar question," University of Auckland volcano expert Shane Cronin told VOA. "Looking at the images so far, the level of devastation is less than I was fearing."

Likewise, thanks to volcanic and seismic monitoring tools, Tongans did receive an early warning about the impending eruption, which gave them more time to prepare.