Sorry, mainstream media: Republicans aren't one lunch meeting away from dropping their support for white supremacy 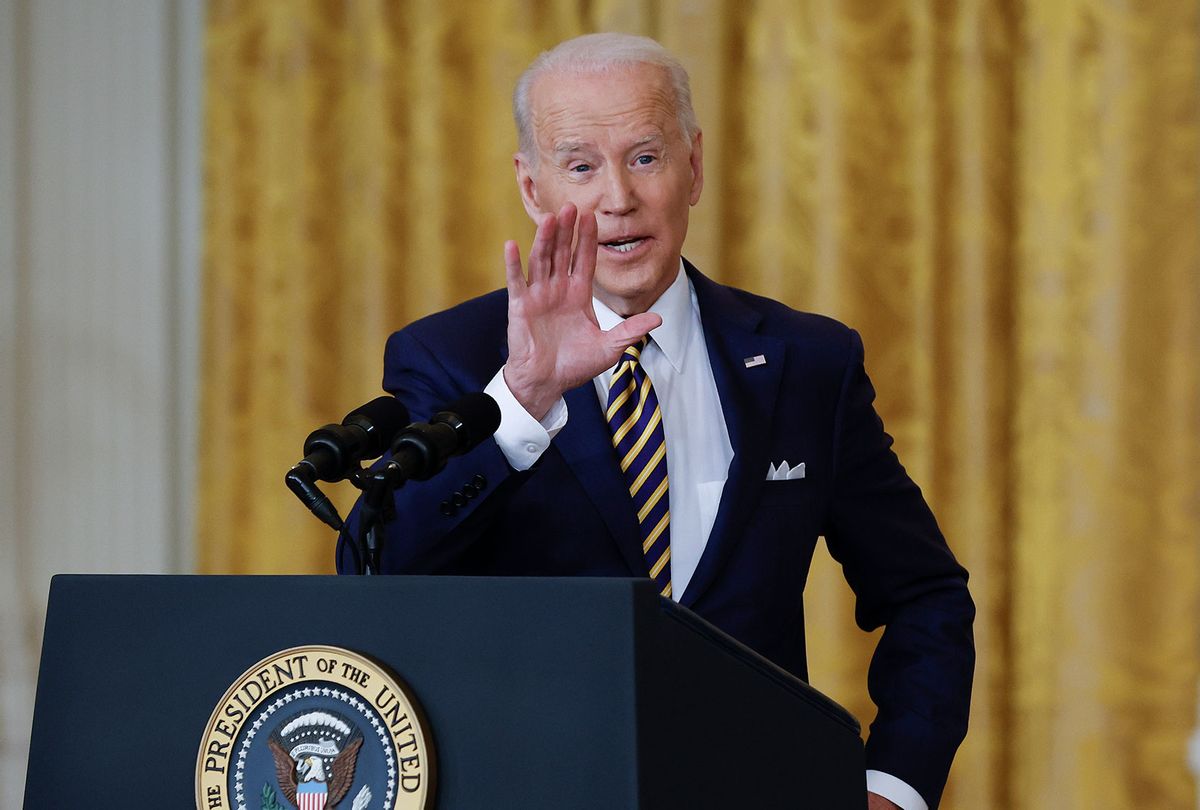 U.S. President Joe Biden answers questions during a news conference in the East Room of the White House on January 19, 2022 in Washington, DC. (Chip Somodevilla/Getty Images)
--

Remember: With Republicans, every accusation is a confession.

Nowhere is that more true than in the discourse around fair elections and voting rights, both of which Republicans stand firmly against. On Wednesday, Senate Democrats attempted to pass a bill that would both protect voting rights and strengthen elections against blatant Republican sabotage. In response, Senate Minority Leader Mitch McConnell, R-Ky., lied and said that Democrats don't care about "securing citizens' rights," but just "about expanding politicians' power."

Republicans made their choice Wednesday, using their filibuster power — which is shamefully being protected by two turncoat Democrats, Sens. Joe Manchin of West Virginia and Kyrsten Sinema of Arizona — to block the passage of the Senate voting rights bill. Some Republicans are no doubt personally racist, in full agreement with Donald Trump's repeated insistence that racially diverse voters in cities like Philadelphia and Detroit are "frauds". Some are just worried about their own power, which they know is threatened in all Americans, regardless of race or ethnicity, have equal rights to the ballot box. Either way, the use of the filibuster — in line with its history — was leveraged by Republicans as a tool of white supremacy.

The obvious people to blame for this gross behavior are Republicans themselves. But what's the fun in that? So, instead, far too many in the media are letting Republicans off the hook and instead fixing the blame on Democrats for somehow not doing more to make Republicans less evil.

In the hours before Republicans killed this crucial democracy protection legislation, Biden held a marathon press conference, talking about a wide range of topics from COVID-19 to Russian/Ukraine tensions. But on the mind of many reporters was one burning question: Why wasn't Biden doing more to stop Republicans from being racist? ABC reporter Mary Bruce kicked off this line of inquiry, claiming, ridiculously, that Republicans "may be open to major changes on voting rights" and complaining that Sen. Mitt Romney, R-Utah, "says he never even received a phone call from this White House."

RELATED: Republicans can't make it any clearer: Trump's Big Lie must be defended at any cost — even democracy

Romney released this bait to the press over the weekend, correctly assessing that it would be filtered through the mainstream media assumption that Democrats are the only politicians who possess autonomy. And sure enough, as the press conference demonstrated, Biden was being blamed for not "reaching out," while Romney is not being asked why he needs to be cajoled to take a very basic stand for the right of all Americans to vote.

This idiotic assumption — that Democrats are responsible for GOP racism, but not Republicans themselves — only got uglier as the press conference went on.

At least two reporters parroted feigned Republican outrage over Biden's comments about George Wallace and Bull Connor at Biden. NBC News reporter Kristen Welker noted that Biden has made his inauguration speech about "bringing people together," before confronting him about the people who "took exception" to last week's comparison of voting rights opponents of today to George Wallace and Bull Connor. Shortly after, Philip Wegmann of RealClearPolitics asked a similar question, implying that the blame for the conflict over voting rights lay not with Republicans passing racist laws, but Democrats for being too blunt in their opposition.

Implicit in such lines of questioning is an assumption — beloved by the right — that to be called out for racism is far worse than actually being racist. Biden is being accused of being divisive for drawing a clear and accurate line between voter suppression of yesteryear and today. But Republicans don't face similarly harsh questions about their opposition to voting rights, or why they think it's acceptable to systematically target people of color for disenfranchisement. Biden is asked why he didn't somehow persuade Romney to support voting rights, but Romney isn't asked why he needs such persuasion, or why his own supposed morality doesn't drive him to stand up for basic human rights.

RELATED: Ron DeSantis wants to hijack Florida redistricting — and cut number of Black districts in half

This idiocy began even before Biden's press conference Wednesday. Over the weekend, Chuck Todd of NBC accused Biden of failing "to build a small coalition of governing Republicans," rather than asking why Republicans are so relentlessly obstructionist. And in his preview piece of the failed voting rights Senate vote, New York Times political reporter Jonathan Weisman implied that Republican votes were somehow gettable, but "Democratic activists have spent far more time and energy trying to break the will of Mr. Manchin and Ms. Sinema on the filibuster than they have working to win over Republicans on the actual legislation."

The layers of irony here are heavy to the point of being debilitating because the usual media excuse for not holding Republicans' feet to the fire over such questions is that it is pointless to do so. As Greg Sargent at the Washington Post writes, because GOP opposition to voting rights "is a foregone conclusion, Republicans are too rarely asked by reporters to justify it." Instead, reporters treat Republican attitudes about this issue as "natural, unalterable, indelibly baked-in." But only, critically, when it comes to reporters themselves refusing to hold Republicans accountable. When the topic shifts away from media responsibility to the responsibility of Democrats and activists to somehow change GOP minds, suddenly the assumptions change. No longer are Republicans viewed as resolute in their opposition to the point where it's useless to talk to them about it. All of a sudden, Republicans are recast as soft targets who are one friendly lunch or flattering phone call away from dropping their stubborn opposition to basic democratic protections.

Biden was castigated in some media corners for showing a flash of anger over the repeated questions about why he wasn't nicer to Republicans who are trying to decimate voting rights. But it's honestly surprising he held back as much as he did. Wednesday's press conference was a perfect illustration of the deeply unfair double standard the press holds itself to, where reporters aren't expected to press Republicans about their opposition to voting rights, but Democrats are supposed to wave a magic wand and make Republicans act like decent human beings. This dereliction of both duty and common sense is annoying at the best of times, but right now, the vapidity is morally indefensible.

As media critic Margaret Sullivan noted in the Washington Post recently, "That American democracy is teetering is unquestionable," and yet much of the press is "afraid to stand for something as basic to our mission as voting rights, governmental checks and balances, and democratic standards." Instead, the coverage all too often resorts to the typical-but-misleading bothesiderism the D.C. press loves, in which Biden's blunt characterization of Republican opposition to voting rights is regarded as equally bad — or sometimes worse — than the actual fact that Republicans are trying to take away the basic right to vote.