What's the difference between Morton's and Diamond Crystal kosher salt? 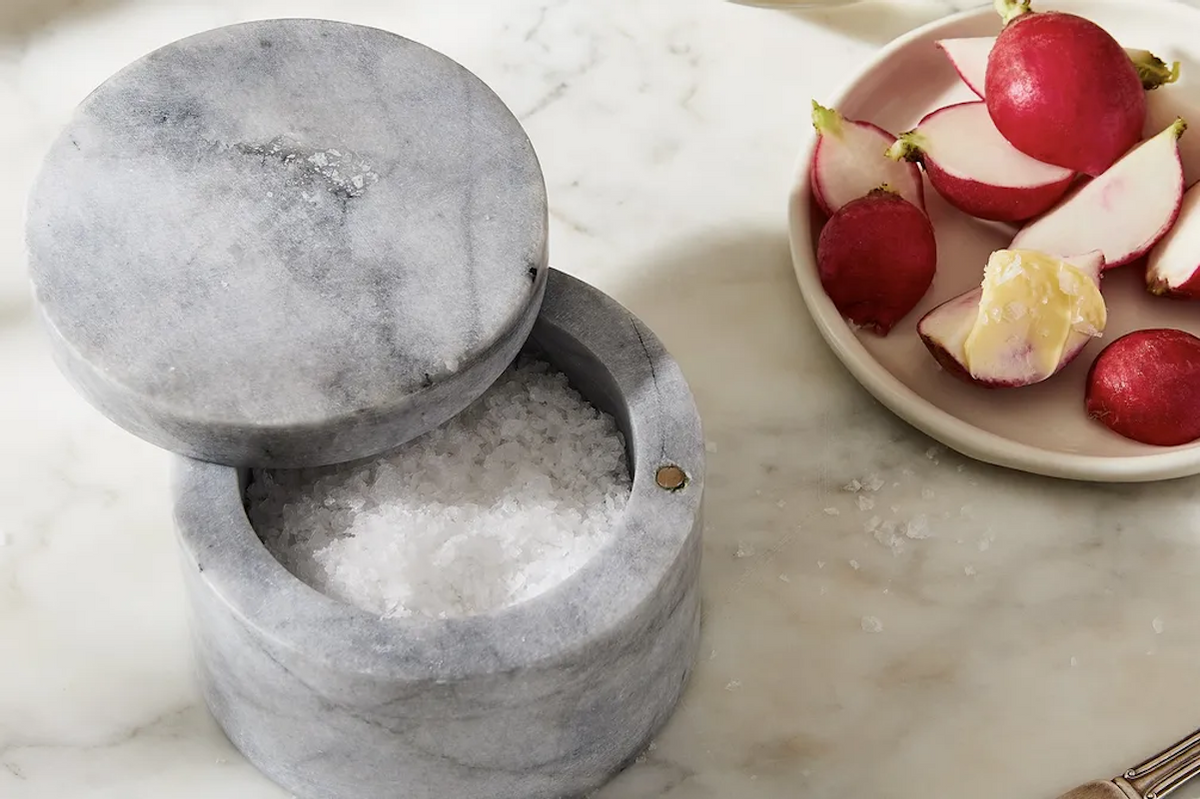 Chefs are anything but nonchalant about sourcing ingredients. Missy Robbins, who cooks at Lilia in Brooklyn, has been using La Valle tomatoes for the past ten years; when it was time to choose a cooking olive oil for their restaurant, she tasted fifteen types before landing on Monini; and they bring in Tutto Calabria jarred chiles from Italy.

Even the salt, an ingredient often taken for granted, is carefully chosen: At Lilia, they use only Diamond Crystal kosher salt — and if Morton's kosher salt comes in, Chef Robbins says, it throws everything off. (When Food52's Test Kitchen Manager worked in the kitchen at Franny's, he remembers using "the red box" — that's also Diamond Crystal Kosher Salt too).

It's not just chefs who have an expressed preference for a certain name in salt. When we asked our Twitter followers what brand of salt they use in cooking (as opposed to finishing or garnishing), they showed allegiance to Morton's.

But is this brand loyalty among kosher salts based on family biases and traditions — it's what your dad used, it's what you're comfortable with — or is there a real, taste-able difference between Morton's Kosher Salt and Diamond Crystal Kosher Salt?

Samin Nosrat basically wrote a book-length love letter to Diamond Crystal Kosher Salt in "Salt, Fat, Acid, Heat." OK, not really, but she did single-handedly save the three-pound boxes from being discontinued in early 2019. Safe to say that she is the foremost expert on these two brands of kosher salt. "There are two major producers of kosher salt: Diamond Crystal, which crystallizes in an open container of brine, yielding light and hollow flakes; and Morton, which is made by rolling cubic crystals of vacuum-evaporated salt into thin dense flakes." But what does that mean for cooking and baking purposes? Diamond Crystal is less salty and more crumbly, whereas Morton is much saltier and denser. You cannot, I repeat, cannot swap out one for the other without adjusting the amounts. Doing so will either create a much saltier recipe or a significantly undersalted dish.

Nosrat also notes that Diamond Crystal dissolves much more quickly than Morton. "The more quickly salt dissolves, the less likely you are to overseason a dish, thinking it needs more salt when actually the salt just needs more time to dissolve." Oh, and did we mention that Diamond Crystal sticks to food much better because of the smaller crystals, which means if you season meat or vegetables, the salt won't just fall off in the pan. We're starting to understand why Nosrat loves it so much.

What is table salt?

As a rule of thumb, Food52's recipes are tested with Diamond Crystal, unless one says otherwise.

Turns out that there are visible differences at the level of the individual salt crystals. As Jill Santopietro reported for Chowhound back in 2010, Diamond Crystal and Morton's have different shapes: Morton's is made by flattening salt granules into large thin flakes by pressing them through high-pressure rollers, whereas Diamond Crystal is formed by a patented method in which "upside-down pyramids [are] stacked one over the next to form a crystal."

This process, according Edward Schneider of the New York Times, who also wrote about D.C. versus Morton's in April of that year, is the patented Alberger method (yep — that's the same process used to make Flavacol stick so well to popcorn): It results in "handsome hollow pyramid-shaped grains. This hollow structure accounts for the salt's lightness, and the thin walls of the 'pyramids' for its crushability."

In each pinch of Diamond Crystal, there's more space between the grains of salt (because the crystals don't sit as snug against each other) — which makes it, writes Santopietro, lighter and less salty than Morton's (and fine sea salt or table salt) — "and therefore more forgiving in the kitchen." You're less likely to over-salt if you use Diamond Crystal. Switch from Diamond Crystal to Morton's without making adjustments and your food might burn a hole through your tongue.

Schneider recounts his own experience:

Suddenly, I lost my knack for getting the salt spot-on: everything was oversalted. Everything. Pound cake tasted like something you might serve with pot roast, and pot roast tasted like the barrel-preserved meat served on HMS Bounty. For heaven's sake, the spaghetti was too salty — I was overdosing the pasta water.

If you're wondering about converting between the different kinds of salts, Santopietro and Schneider have done that research for us:

Santopietro's rule of thumb? "Think of Morton's and fine salt as roughly the same" and substitute it with nearly twice the amount of Diamond Crystal.

But recipe writers frequently neglect to identify the brand of kosher salt (shame on us!), even though it makes quite a difference. So what's a home cook to do? "Pretend they used Diamond salt," says Deb Perelman of Smitten Kitchen: You can always increase the amount of salt later.