So what the hell happened to Boris Johnson — and can it happen to Donald Trump?

Britain's upper-crust pseudo-Trump looks to be toast — over a garden-party scandal. Is there a lesson for America? 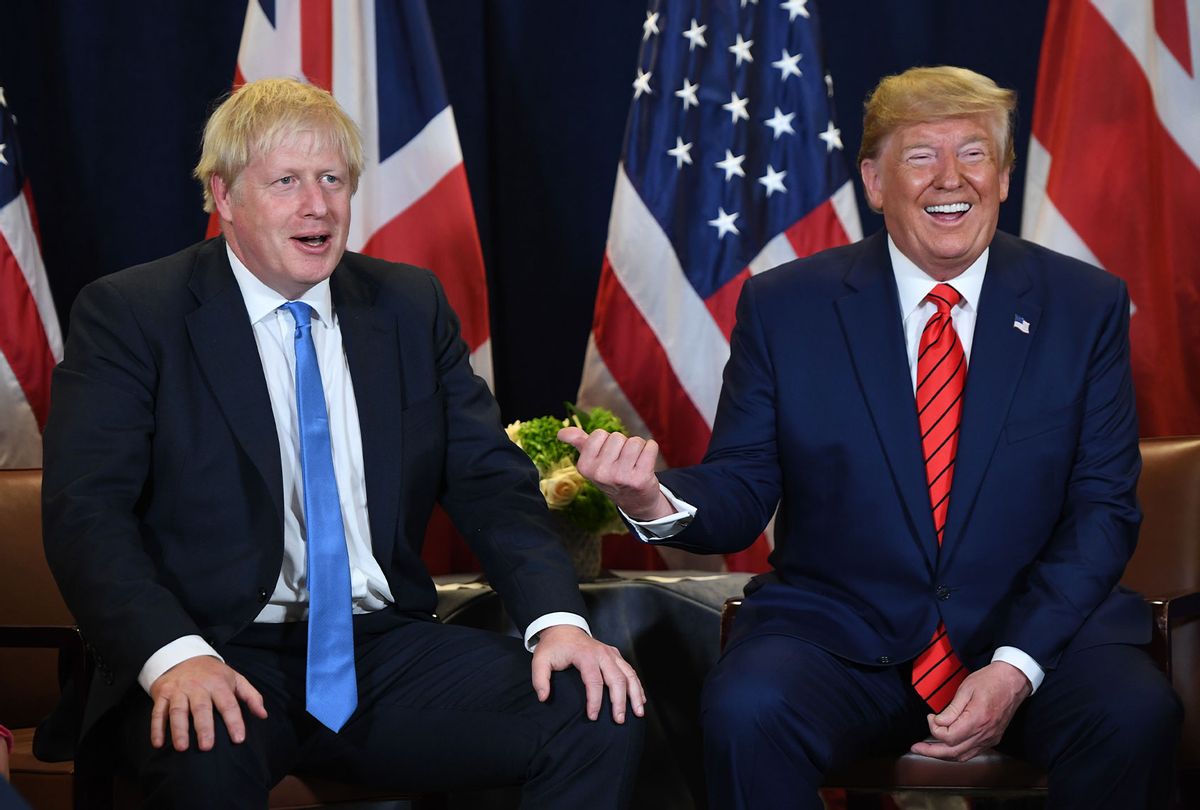 There's a truism of conventional wisdom, broadly accepted on both sides of the Atlantic, that British and American politics since World War II have run in rough parallel. Sometimes one of the two Anglophone democracies gets ahead and sometimes the other falls behind, but roughly similar phenomena — adjusted for cultural differences and quite different political systems — tend to occur at roughly the same time.

Both nations experimented with large-scale social-democratic reform in the 1960s, under left-center political leaders — Lyndon Johnson in the U.S., Harold Wilson in the U.K. — who were ultimately undermined by that decade's social discord. In the other direction, Maggie Thatcher became prime minister the year before her friend Ronald Reagan was elected president; between them they remade the political economy of the Western world, with calamitous consequences we're still feeling today. Bill Clinton's "New Democrats" emerged a couple of years before Tony Blair's "New Labour," inaugurating a triumphalist era of neoliberal reform politics that ended up pissing off the entire world — except for the investment banks and their political flunkeys, of course, who remain distressingly powerful and entirely cocooned from reality.

That brings us to the era of current British Prime Minister Boris Johnson and, um, You Know Who — the other morbidly obese guy with weird hair and bottomless self-regard, perplexingly regarded by many Americans as their "real" president despite the numerous ludicrous or reprehensible qualities I hardly need to explain here. Given the pattern described above, it's tempting to wonder what Johnson's apparent downfall in recent weeks — less than three years after he led the Conservative Party to a sweeping election victory on the promise to "get Brexit done" and, one might say, to make Britain great again — might mean for the United States.

RELATED: After a big win for Boris Johnson and Brexit, British left faces the darkness

The correct answer is almost certainly "not much." This looks to be a case where the differences between the two nations are more important than the similarities, and where the distinctive characteristics of British society — even two generations or more after the collapse of the British Empire and its rigid class hierarchy — are thrown into sharp relief. You may have read headlines suggesting that Johnson's problem is about too much partying during the COVID lockdown, and/or insulting the royal family by holding a booze-up on the eve of Prince Philip's funeral. It's not quite that straightforward, but you'd be right to conclude that there's not even an approximate American equivalent: There's literally no one Donald Trump could insult, and no parties he could conceivably host, that could drive away his red-pilled supporters to this extent.

But the real differences are more structural. Boris Johnson isn't exactly Donald Trump, despite a certain symbolic or semiotic resemblance. The British Tories aren't even half as deranged as the contemporary Republicans, and never pretended that their loyalty to Johnson was more than instrumental. Perhaps most important of all, the U.K.'s arcane political system, although weird and broken in its own special way, simply doesn't offer the same opportunities for anti-democratic subversion.

No one in Britain has suggested any significant changes to voting rights (which are effectively the same across all four nations or regions of the U.K.) or has ever claimed that any election results were fraudulent. For that matter, the prime minister is not chosen by a democratic vote in the first place, and no one pretends otherwise. Essentially, it's as if the speaker of the House were also head of government; there is no "executive branch" in the American sense. If Johnson is forced to resign before the next British general election in 2024, the new prime minister will be chosen by his fellow members of Parliament and paid-up members of the Conservative Party — an electorate of roughly 200,000 in a total population of 67 million.

That doesn't mean the trans-Atlantic comparison isn't instructive in various ways. It's clearly the case that the floppy-headed, overripe schoolboy in 10 Downing Street has seen his support abruptly collapse, both among the establishment Tories around him in Parliament and the voters who gave him a resounding majority in 2019. Exactly how and why that happened is a longer story, but for now let's note that this is exactly the kind of karmic payback that Donald Trump's enemies have imagined so fervently and yearned for so long. "Responsible" figures on the political right have awakened at last! And realized, not a moment too soon, that they had sold out their so-called principles and tethered themselves to a corrupt and incompetent con man!

OK, not quite. That reassuring fable doesn't have much to do with what's been happening in London in recent weeks: If the Tories are fleeing from Boris Johnson, it's because he suddenly looks like a loser — a classic case of the sinking ship leaving the rat. It's too early to know how things will play out amid all the backstage backstabbing in Westminster, and it would be entirely typical for Johnson to try to hang onto power until the next national election in 2024, even at risk of torpedoing his own party. Nonetheless, it seems reasonable to suggest that politics in the U.K. show signs of a possible return to "normal," something that has decidedly not happened here.

There was plenty of normal-ish but exciting political drama last week, with the British media abuzz over the possibility that anti-Johnson lawmakers within the Conservative majority might force a motion of "no confidence" that could push him out. (For parliamentary reasons I won't even try to decode, it would take 54 signed letters from members to compel such a vote.) Tory senior statesman David Davis, who was once in charge of Brexit negotiations under former Prime Minister Theresa May, attacked Johnson in the House of Commons, quoting words directed at Neville Chamberlain in 1940: "You have sat there too long for all the good you have done. In the name of God, go!" One conservative MP literally "crossed the floor" to switch parties and join the Labour opposition during parliamentary debate, something that hasn't happened in decades.

For the moment, Johnson's intra-party foes are waiting for a civil servant's report on the idiotic technical question of whether the PM actually knew that holding parties in the courtyard at 10 Downing Street while the rest of the country was in full lockdown was breaking the law. (Johnson loyalists have even argued that since "No. 10" is Crown property, the laws that kept normal people indoors simply didn't apply.) But none of this would be happening in the first place if Johnson's popularity hadn't cratered, both among the posh suburbanites of the English Tory heartland and the working-class voters in post-industrial areas who backed him on Brexit — that latter group the closest U.K. equivalent to Trump voters.

Whether the Labour Party, under its charismatic but fatally indecisive center-left leader, Keir Starmer, is in any position to stage an electoral comeback remains to be seen. (Labour hasn't actually won a general election since Blair's final victory in 2005.) Since the ouster of leftist former leader Jeremy Corbyn after the big Tory win of 2019, Labour has itself been consumed by internal faction fighting and has failed to put forward any coherent agenda — another situation that may sound familiar to Americans of the liberal or progressive persuasion.

But pretty much nobody now believes that Boris Johnson will lead the Conservative Party into battle against Starmer's vaguely-remodeled Labour in 2024, whereas the only question surrounding Donald Trump is whether or not he really wants to run, not whether Republicans will slavishly agree to nominate him as long as he's breathing. New Statesman columnist Paul Mason wrote a fascinating essay last week about why "working-class Tories" have turned on Johnson, which goes some distance toward explaining why nothing similar has happened in the United States. English working-class conservatism, Mason argues, "remains broadly guided by a specifically Tory ethos going back to Thomas Hobbes":

It believes humans are bad, destructive and chaotic without firm government. That society is organic and should not be tampered with. That there are no "natural rights" for a state to trample. And that only an authoritative, educated and trained elite can be trusted to govern. … The deal at the heart of working-class conservatism is that, since only the elite can govern, it has to govern well, and honestly. …

Its role models are those upper-class officers in First World War films, who went manfully over the top armed with a whistle and a revolver. Compared with them, it's easy to conclude that Johnson is the kind of bloke who would have shot his own big toe off to get to the rear, and then claim he didn't know it was against the regulations.

Donald Trump is of course also the "kind of bloke" who would shoot his own foot off to avoid anything difficult or painful, but the specifically American form of working-class self-hatred doesn't involve any belief that "an authoritative, educated and trained elite" can govern well or honestly. Both Johnson and Trump announced themselves from the start as members of the upper crust who were self-evident frauds, liars and cheats. But only one of them, to this point, has seen that become an overwhelming negative.

More from Andrew O'Hehir on Britain, America and this moment in history: