After a big win for Boris Johnson and Brexit, British left faces the darkness

Boris Johnson has a Brexit mandate; Jeremy Corbyn's unlikely run is over. So what's the lesson for America? 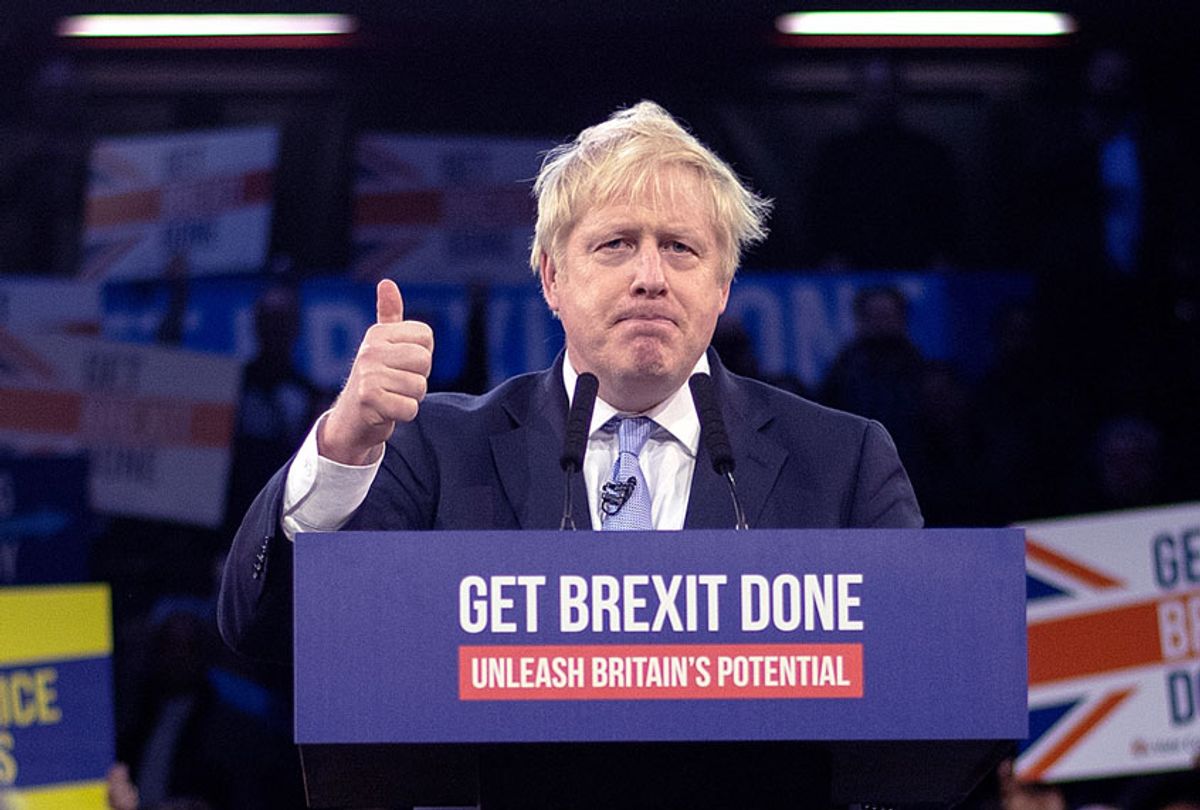 British general elections have a tendency to deliver last-minute surprises, and the U.K.'s third in less than five years did not disappoint. Unfortunately for the Labour Party, the British left and the anti-Brexit forces, the surprise of 2019 appears to be a catastrophic wipeout.

Polls leading into Thursday's election had suggested a tightening race that could end in a "hung parliament." Lines — sorry, queues — at polling places were lengthy, and British social media buzzed with the possibility that left-wing Labour leader Jeremy Corbyn might win just enough seats to forge a coalition government with the Scottish National Party, ousting preening, Trump-flavored Prime Minister Boris Johnson and the Conservative Party and paving the way for a second Brexit referendum.

None of that will happen now. As Johnson told a cheering crowd at Conservative Party headquarters in London, the Tories had won a "stonking" victory, which will ensure that the U.K. leaves the European Union sooner rather than later, and will lock down the right's hold on power in Britain for the next several years.

With most votes counted early on Friday morning, the BBC reports that the Tories will win an outright majority of roughly 364 seats in the 650-seat House of Commons, a gain of 47 from the indecisive 2017 election.

If possible, the news for Labour and Corbyn, its controversial leader, is even worse than that. While the Conservative vote share is only slightly higher than it was in 2017, Labour's vote has declined by roughly 8 percent. After gaining 30 seats in 2017 for a total of 261 — its biggest electoral gain for 20 years — Labour stands to lose 57 or 58 seats this time around, potentially its worst overall election result since World War II.

There are several interesting footnotes to this election, including a big comeback by the Scottish National Party, who have won at least 48 seats, virtually wiping out both Labour and the Tories north of the border and reigniting the push for Scottish independence. The centrist Liberal Democrats, who had hoped to thrive by being the only party clearly against Brexit, remain irrelevant, with party leader Jo Swinson losing her seat to the SNP.

But for Labour and the overall British left, no sugarcoating is possible. This election is an unmitigated disaster.

As author and journalist David Kogan told me in a recent interview, the British left saw Corbyn's unexpected victory in the Labour leadership campaign of 2015 as a historic opportunity to pursue systemic progressive change. That opportunity is gone now, and for years to come. Let's take a moment to acknowledge that for many people in Britain and around the world, this is a crushing blow.

Whatever you make of Jeremy Corbyn, he is a person of great moral decency and unbending principle, who engaged and aroused a generation of young activists. For practical purposes his political career is now over: Late on Thursday, Corbyn said he intended to remain as leader for a period of "reflection," although many in the party would clearly prefer he quit immediately. He certainly will not try to lead Labour into another election.

Exactly why did this election go so badly south for Labour, and what lessons does this debacle hold for Americans who yearn to defeat Donald Trump next November? It's way too early to offer definitive answers to those questions — especially from thousands of miles away — but if you spent any time on political Twitter on Thursday evening, you know that plenty of people gave it a try.

The fairest answer is probably that damn near everything went wrong for Labour, and that outside observers will draw whatever lessons they like, mostly the ones that support whatever they already believe. Democratic "moderates" in the U.S. are already using the Corbyn catastrophe, for instance, to warn darkly that their own party must not take a chance on a leftist or progressive candidate like Bernie Sanders or Elizabeth Warren in 2020. Whatever the merits of that argument, it doesn't have much to do with what just happened across the pond.

It's perfectly true that Corbyn was the most prominent leftist leader of any major political party in any major Western democracy over the last several years, and that he pushed an unrepentant progressive agenda. But that agenda — expanding public services and ending the era of austerity — was widely popular in almost every detail, and was not the reason Labour lost this election so badly.

Corbyn himself, as a political personality, is another matter. Four years as party leader have exposed the fact that he was a lifelong activist with no management experience. He has alternately seemed too weak and too autocratic — and has also been subjected to relentless vilification by the pro-Tory press. Fairly or not, people in Britain who didn't adore him had largely come to fear and dislike him. So far, it seems that many Labour candidates think Corbyn's presence at the top of the party is the biggest reason they lost, but not necessarily because middle-ground voters perceived him as too radical.

It was hugely damaging that Corbyn refused to take a clear position on Brexit, the overarching political issue that dominated  this election. To be fair, he didn't have great options, and his promise to act as a "neutral referee" on Brexit reflected an awkward split within his party's base. To oversimplify the equation slightly, traditional working-class Labour voters in the north of England tended to support Brexit, while affluent, cosmopolitan Labour voters in and around London overwhelmingly opposed it. Still, if the party's leader had taken a clear position and stuck with it (as in fact he did in the 2017 campaign), the results might have been different.

Corbyn also appeared indecisive, or somewhat worse than that, when it came to Labour's burgeoning anti-Semitism scandal, in which some Jewish Labour MPs or candidates were targeted for abuse by pro-Palestinian leftists. As David Kogan puts it, there was no evidence that Corbyn himself harbored hateful views, but also no evidence that he cared about the problem all that much or understood how badly it had damaged the party's reputation.

There are no precise parallels to either of those things in American politics, although there are certainly echoes. To this point, allegations of anti-Semitism against Democratic members of Congress have done no lasting damage — largely because their source, one might say, is compromised. But Brexit, I suppose, is metaphorically similar to Donald Trump's border wall, which is more or less the instrument he used to pry Ohio, Florida, Iowa, Michigan, Wisconsin and Pennsylvania away from the Democrats.

In both cases, we're talking about a political party struggling to adapt to rapid change, so far without success. One analysis of the British election I encountered late on Tuesday night suggested that Labour might actually gain a few previous Tory seats in London, while losing many more longtime Labour seats in what was once the party's working-class northern heartland. (This appears accurate so far.) That would be England's version of the Big Sort, in which geography, educational level and generational identity — along with race, of course — become the dominant social dividing lines and political signifiers.

Jeremy Corbyn and the British left just experienced a painful illustration of this cultural and demographic shift in action, and of how it nourishes a politics of rage and resentment that can undermine and endanger democracy. Americans already know about this: You can feel certain you're on the right side of history, and still end up, shocked and dismayed, on the wrong side of electoral arithmetic. The trick, of course, is to find a way to win without sacrificing your essential principles. Does anyone ever do that?