“We did not believe it when we first heard,” says GOP Senate campaign committee. That's because it's not true 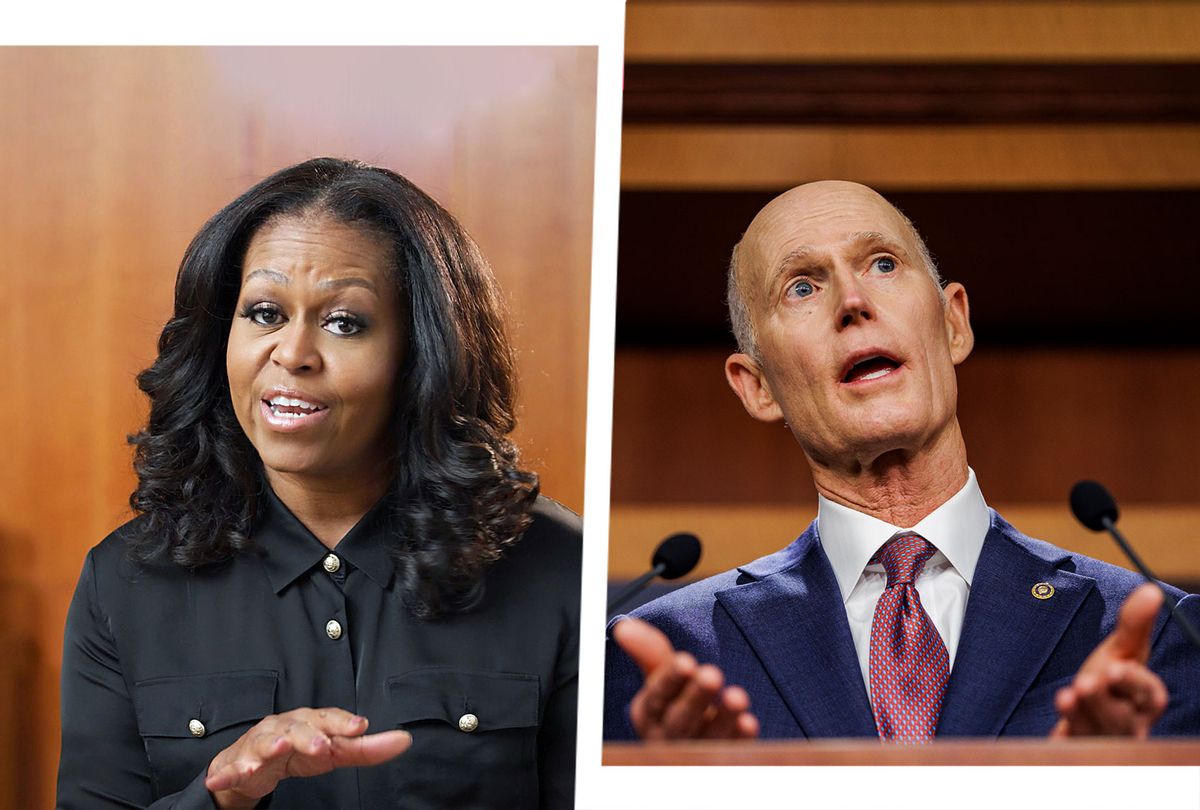 Republicans are using a baseless "rumor" that former first lady Michelle Obama will run for president in 2024 to raise money for Senate candidates.

The former first lady has repeatedly ruled out a presidential run — or any other entry into electoral politics — but the National Republican Senatorial Committee twice this week sent out fundraising appeals warning supporters that she is exploring a White House bid, while offering no evidence.

"Yup, you are reading this right. Michelle Obama? Running for PRESIDENT in 2024?" the NRSC, which is led by Sen. Rick Scott, R-Fla., said in a Jan. 24 fundraising email first flagged by Punchbowl News. "Left-wing Democrats KNOW they are going to LOSE their Majority in Congress this November, so they want to bring out an OBAMA to save them in 2024."

The group sent a similar fundraising email one day earlier.

"We did not believe it when we first heard," that email said. "Rumors are spreading like wildfire that a certain someone, someone who already spent 8 YEARS in the White House, is thinking of running for PRESIDENT in 2024."

Obama has repeatedly ruled out running for president since leaving the White House.

There have been no any rumors coming from the Obama camp or reliable Democratic sources to suggest that the former first lady has had a change of heart. But content mills quickly seized on comments made by podcaster Joe Rogan to hype a potential 2024 run, in headlines unsupported by evidence of any kind.

"I really believe if Michelle Obama runs, she wins," Rogan said on a recent episode. "She's great, she's intelligent, she's articulate, she's the wife of the best president that we have had in our lifetime in terms of, like, a representative of intelligent, articulate people."

People with no insight into Michelle Obama's thinking or her family life have repeatedly claimed that Obama could end up running, citing polls that have repeatedly found her to be one of the most popular figures in the country. A 2020 Gallup poll found that Obama is the most admired woman in the world and a Morning Consult/Politico survey found that her favorable rating was 20 points higher than former President Donald Trump's and 14 points higher than President Joe Biden's.

Obama, who founded the voter registration campaign When We All Vote, announced earlier this month a partnership with a coalition of voting rights groups to register more than a million new voters ahead of the 2022 midterms. The coalition plans to recruit 100,000 volunteers, organize at least 100,000 voters to call their senators to support voting rights legislation, and recruit thousands of lawyers to fight Republican "voter suppression" laws, which the letter compared to "poll taxes" and "literacy tests."

"One year ago, we witnessed an unprecedented assault on our Capitol and our democracy," Obama wrote. "From Georgia and Florida to Iowa and Texas, states passed laws designed to make it harder for Americans to vote. And in other state legislatures across the nation, lawmakers have attempted to do the same."

Obama has repeatedly been targeted by right-wing conspiracy theories, despite largely focusing her public life since leaving the White House on seemingly uncontroversial efforts to encourage healthier lifestyles and civic engagement.

Even her vow to register voters drew conspiracy theories from far-right figures like Steve Bannon, who suggested that her coalition would register non-citizens even though that's both illegal and effectively impossible.