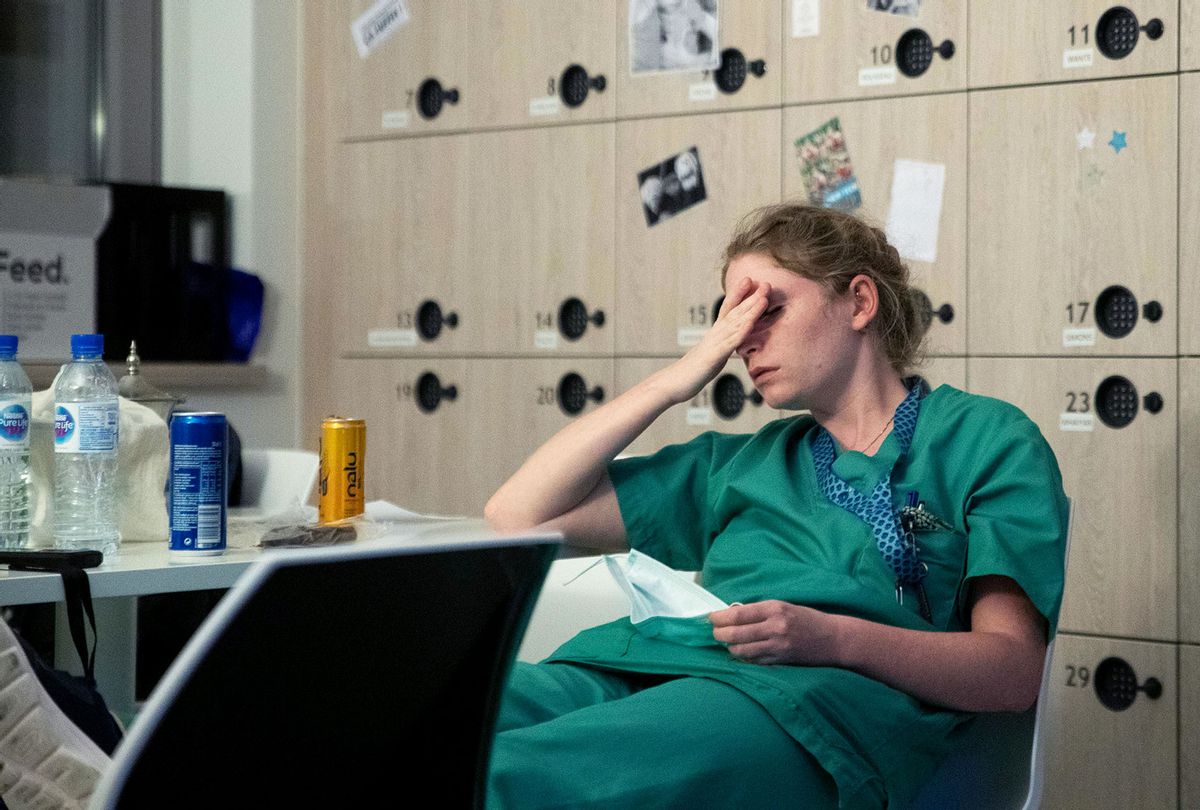 nurse, reacts to tiredness early on April 11, 2020, during her night shift in the intensive care unit exclusively for COVID-19 patients at the Ixelles Hospital in Brussels, amid the COVID-19 pandemic, caused by the novel coronavirus. (ARIS OIKONOMOU/AFP via Getty Images)
--

The nurse was twisting her hair and pulling it out.

She had three patients, June Brown recalled, and was running back and forth so she could give the best possible care to each one of them. This patient load would have been unimaginable except in the most extreme crises prior to the COVID-19 pandemic; they have become all too common since March 2020.

"She would stop at the desk and would hold her hair and spin it and pull her hair," Brown, a registered nurse (RN) in the Covid ICU at Osceola Regional Hospital, told Salon. "That's physical. That's painful. I would say, 'Listen, stop, stop. Just sit down, breathe in, breathe out.' So that she can get her anxiety level down."

Brown is hardly alone in observing the devastating toll of the COVID-19 pandemic on American healthcare workers. Through many interviews, frontline employees and those who represent them sent the same message to Salon: healthcare professionals are suffering because there are too few personnel and too many patients. Yet because anxiety and work stress often manifest with physical symptoms, theirs is not merely a professional hardship; it is a genuine threat to their personal health.

Zenei Triunfo-Cortez, RN and a president of National Nurses United, described the degree of physically exhaustion: "Day in, day out, you go through your shift not knowing whether you'll get a bio break, if you'll be able to get a bio break."

Traditionally nurses in an intensive care unit (ICU) will have no more than one patient, two if necessary. When you have more patients than that, the quality of care declines — and the workers themselves suffer for it. Falguni Dave, an RN at John H. Stroger, Jr. Hospital of Cook County, elaborate on how nurses accidentally hurt themselves because they are spread too thin with such an overwhelming case load.

"Nurses are ending up being injured because they're working short," Dave explained. "When it comes to doing patient care, you have to turn the patient. These patients are most of the time very heavy, obese patients that end up in the ICU intubated, and it takes a team to do their care. When you don't have that and you work short, you're risking injuring your joints, your back, whatever, because you're putting all that weight onto one person, versus maybe two or three that could help you do that."

RELATED: Eight months into the pandemic, nurses say they still aren't getting the safety equipment they need

Brown, the Osceola nurse who tried to talk down her colleague down as she pulled out her hair, grappled with an unexpected affliction of her own.

"For me, I broke out in a rash," Brown told Salon. "I didn't tell people this because it's personal, but I don't care about saying it now because it's the truth. When my anxiety — and I noticed this from last year — when my anxiety gets bad, because I'm very repressive, I repress my feeling. I got so good at it that it shows up in a rash, breaking out on my skin. So I have to take care of that."

A midwife in northeastern Pennsylvania, who asked to remain anonymous, spoke of the exhaustion that comes from being expected to put in so many hours. Her social life has become anemic and her body copes with ailment after ailment.

"The additional stress of working in this pandemic has significantly impacted my health," the midwife told Salon. "My blood pressure and weight have increased due to the increased cortisol produced from chronic stress."

The underlying problem, individuals who spoke to Salon agreed, is that hospital administrators focus on turning a profit rather than providing the best environment for staff and patients. If they can make more money by overworking the nurses and others at the COVID-19 frontline, they will choose to do so — at least, that is the way the nurses Salon spoke to overwhelmingly perceive the situation.

Kate Hanselman is a lead nurse practitioner and psychiatric mental health nurse practitioner at Thriveworks in West Hartford, Connecticut. Speaking to Salon, she described how nurses struggle to address work-related health issues because of the work culture that exists in America's healthcare system.

"I work with a number of nurses as patients of mine, which is always heartening to me because it's hard to ask for help, and especially in healthcare that can be very highly stigmatized," Hanselman told Salon. A big problem is burnout due to structural and environmental issues that preceded the pandemic, but were exacerbated by it. This is "a system that was already stressed with nurses that were already burned out," Hanselman said. There already was a nursing shortage before the pandemic "took everybody by surprise. The health systems were not prepared for it. Obviously it had a huge impact."

Worse, nurses are encouraged to shoulder those burdens stoically.

"If burnout is a problem that a nurse has when they hit a threshold, then all of the responsibility and the onus is on that nurse to get better, to take better care of themselves," Hanselman explained. "In reality, nurses are burning out because health systems are strapped and there are not enough people there, and they're terrified to go to work."

Brown admitted to Salon that she had thought of herself as "a very strong person" who did not need help from others in terms of mental health. Last April, however, she decided that she needed to see a counselor because the impact of seeing three or four deaths every day was taking too much of a toll on her overall health.

"It begins to affect your heart," Brown recalled. "It begins to affect your level of anxiety. I never suffer from anxiety, but when I hear a 'Code Blue' overhead, my heart jumped. My body jumped. I'd shake like, 'My God. I don't even have a bed to put that patient in. There's no bed in the ICU before.' And the next thought is that person may not live because there is no bed to put them in. There is no critical care nurse to care for them."

Nurses and other health care workers have been vocal in expressing their distress. They held a strike in June at the John H. Stroger, Jr. Hospital in Cook County, where Falguni Dave works, and in the following month a contract was ratified in which the facility agreed to hire 300 more registered nurses over the next 18 months. At the Osceola Regional Medical Center, where June Brown works, nurses participated in the National Nurses United National Day of Action earlier this month to demand safe staffing. There are a great many reforms that need to be made, the professional who spoke to Salon all said, but none were emphasized as much as hiring more people.

"A nurse should have one to two ICU patients because of the level of care you have to give," Brown reminded Salon. "You're constantly giving and changing medications. You're constantly assessing your patients' response to medications. So this is an ongoing frequent thing that you must do to ensure the patient is responding appropriately and not adversely."

More on healthcare workers during the COVID-19 pandemic: