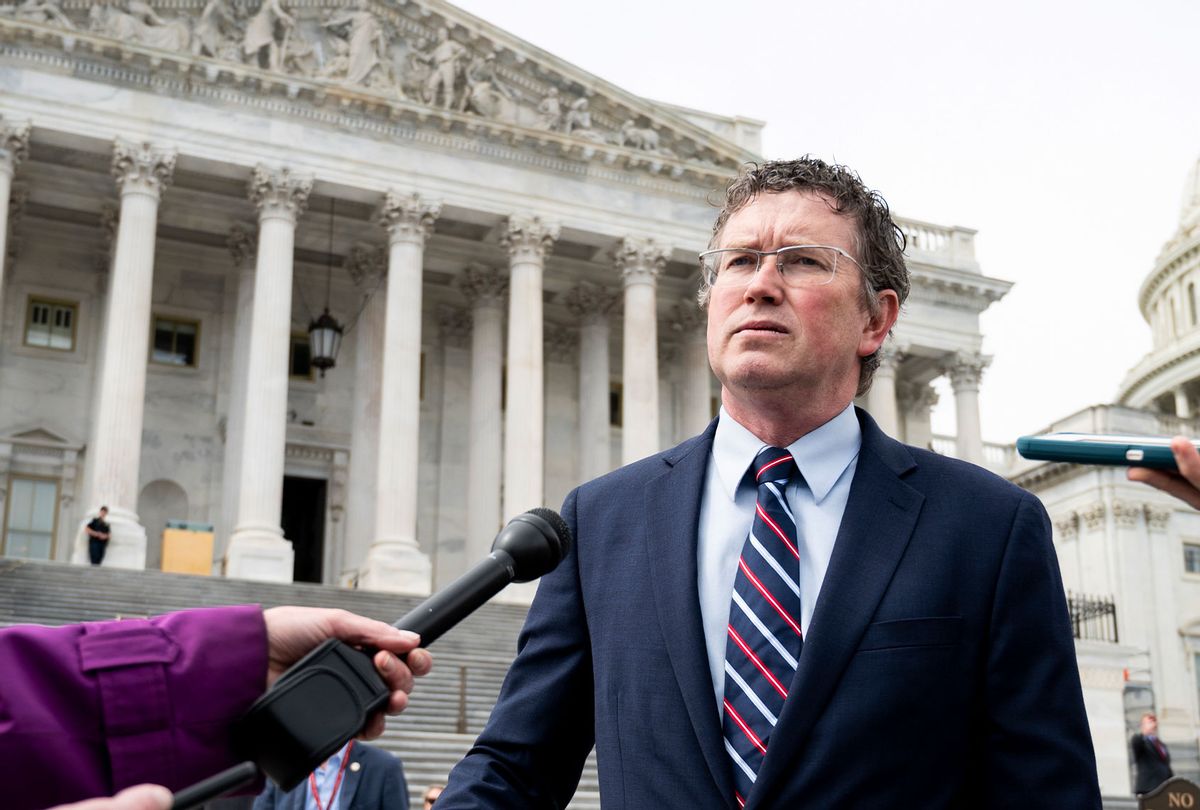 Rep. Thomas Massie, R-Ky., stops to speak with reporters as he leaves the Capitol after the Coronavirus Aid, Relief, and Economic Security Act was passed in the House on Friday, March 27, 2020. (Bill Clark/CQ-Roll Call, Inc via Getty Images)
--

Rep. Thomas Massie, R-Ky., on Sunday tweeted out an inspirational quotation he attributed to Voltaire, the 18th-century French writer and philosopher. In fact, its original source was likely an American neo-Nazi and accused pedophile, who pled guilty to child pornography charges in 2008.

Massie's remarks, reported by Insider, came in a tweet targeting Dr. Anthony Fauci, the director of the National Institute of Allergy and Infectious Diseases, who over the past several years has repeatedly been scapegoated by conservatives over the government's handling of the COVID-19 crisis.

"You mustn't question Fauci, for he is science," tweeted Massie, alongside a cartoon illustration of weary workers holding up a large hand attempting to squash them.

"To learn who rules over you, simply find out who you are not allowed to criticize," Massie captioned the photo, attributing it to Voltaire.

According to a USA Today fact-check, the quote, which regained popularity last May, has no apparent connection to Voltaire, a major figure of the 18th-century Enlightenment regarded as one of the greatest French writers. In fact, Etymologist Barry Popik has concluded that the maxim likely stems from a 1993 radio broadcast by neo-Nazi Holocaust denier Kevin Alfred Strom, the founder of a white nationalist group called National Vanguard. In 2008, Strom pleaded guilty to possessing child pornography in after being charged, among other things, with attempting to coerce a 10-year-old into a sexual relationship. National Vanguard disintegrated shortly after Strom's conviction.

In an online post from 2017, Strom confirmed that the quote was his, writing that "it's pretty clear, even to my critics, that I came up with the idea and the quote — and Voltaire never did."

One Twitter user, Kendall Brown, also pointed out that the illustration Massie shared originated as an anti-child labor cartoon from the early 1900s, "which is ironic, given Massie's vote in Dec. to protect importers who use forced labor."

Indeed, in December, Massie voted against a House bill to blocks the importation of products made through forced labor in China's Xinjiang region. The measure was passed 428-1, with Massie as the sole member of Congress to vote no.

Despite Massie's misattribution and strange choice of visual imagery, at this writing the congressman has not yet taken the Twitter post down.

This isn't the first time Massie has apparently invoked Nazism in debates around COVID-19. Back in August, one of Massie's interns quit after the congressman compared vaccine cards to the policies of Nazi Germany. At the time, Massie tweeted a photo with an image of a weathered wrist tattooed with a concentration camp identification number, captioning it: "If you have to carry a card on you to gain access to a restaurant, venue or an event in your own country … that's no longer a free country." He later deleted that post.

Read more on the GOP attacks on COVID-related regulations: