Is Biden up to the task? It might be a legitimate question — if the available alternatives weren't so godawful 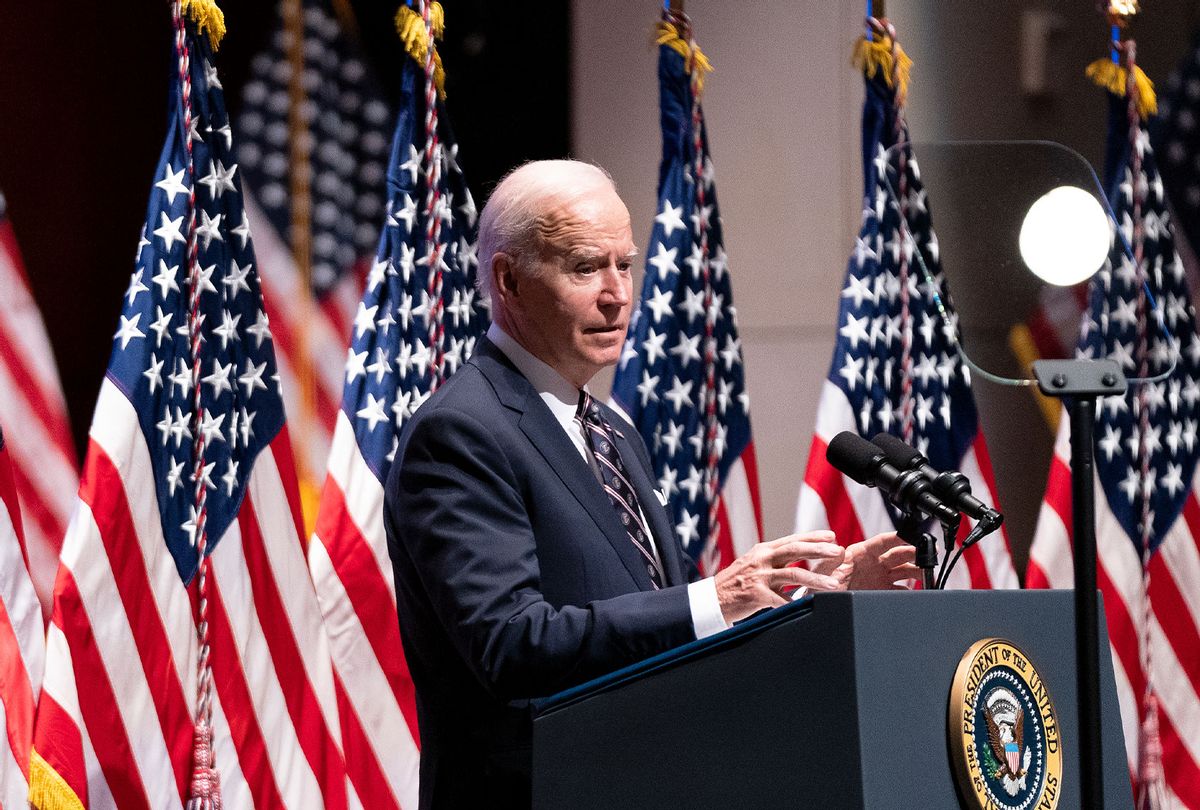 The "whispers" began before Joe Biden was elected.

Some, of course, shouted them. Whether it was his Republican opponent calling him "Sleepy Joe" or members of his own party questioning his commitment to progressive policies and wondering if he was intellectually adroit enough to walk through the metaphorical minefields of historically divisive and nasty national politics, there were many who thought Biden wasn't the best Democrat to meet the presidential challenge.

But in the end, the fact that a majority of voters felt he was the only one who could stitch together the different Democratic factions and attract enough swing voters to beat Trump gave him the nomination and helped propel him into the White House. Joe Biden didn't represent change. With his patriarchal manner and his depth of government experience, he represented a return to societal norms.

And for a while, it was the fear of Donald Trump — and fear of the dissolution of the Union that has so long endured — that kept the criticisms of Biden to mere whispers, the kind that remind everyone why D.C. politics more often than not resembles a public high school cafeteria study hall.

But since D.C. politics is exactly like that, those whispers picked up speed and volume as Biden's communication department fumbled the president's message in his first year and as the former president — banned from Twitter — refused to go gentle into that good night. Our nation, for the last year, has been overwhelmed by the politics of two aging septuagenarians — one a con man and grifting narcissist and the other a centrist who believes in "possibilities."

The susurrus surrounding Biden now includes many of the Democratic faithful who have gone back to wondering whether he is up to the challenge. "We don't know — when he shows up, are we going to get someone barely there, or someone who's on his game?" an influential Democratic activist said to me this week. Biden recently held a two-hour news conference to begin the New Year, and his performance in that marathon session helped quiet some of the more outlandish concerns. But reports over the weekend that Democratic National Committee chairman Jaime Harrison is "frustrated, isolated and trapped" in his job have helped renew the whisper campaign. Harrison fired back against the critics, while an NBC article reported "deep frustration among Democrats that the White House's political operation has failed to communicate a coherent message to state parties."

RELATED: Signs of life in Bidenland: President seizes the pulpit at last — will it change anything?

Biden has remained relatively tight-lipped since that press conference. He's taken a few questions here and there at events, and in some cases snapped at reporters, as he did in this exchange:

Q: Sir, can you say declaratively the election this fall will be legitimate?

Q: Why are you waiting on Putin to make the first move, sir?

Biden: (Laughs.) what a stupid question.

Biden also called Fox News reporter Peter Doocy "a stupid son of a bitch" on a live microphone recently, after Doocy asked him if inflation was a political liability.

Some cheered or laughed at that, while others cringed and protested that no president had ever treated the press so poorly — prompting disbelieving stares from those of us who had to fight the previous president in court to keep our press passes.

But the criticisms about Biden from his own party merit a deeper dive.

The president recently staged an event in the Eisenhower Executive Office Building auditorium during which he and others announced a major push to manufacture semiconductor chips in the United States. "A brand new $20 billion campus outside of Columbus, Ohio. Seven thousand construction jobs. Three thousand full-time jobs," he told us.

Afterward Biden said he wouldn't take questions, because he was sure all we wanted to talk about was Russia. I didn't. Most semiconductors are made in China because most of the raw materials come from there. So why would we bother to do this, I wondered, if we don't have the right stuff?

Me: I have a question about this, if you could.  How are we going to guarantee the raw materials will be available, since many of them come from without the United States, including some countries like Afghanistan that are in turmoil?

Biden: Well, we're working on that. There's a lot not in Afghanistan. There's a lot of — we've been finding out and moving on directions to find where the raw materials are. We're making contracts to make sure we have access to them. And we are doing things that — we're finding out here in the United States, we some — have assets we didn't know we had, in terms of raw materials.

That answer made no sense, and he took no follow-up questions. He walked away. That's part of his problem.  Many members of the press have long complained about the lack of communication from the president, vice president and other high-ranking members of the administration. Ron Klain, Biden's chief of staff, has received more than his fair share of blame for this lack of communication and seeming elitist mentality. The criticism regarding the administration's communication with its own party in Congress is no different.

This criticism has increased as the fear of authoritarianism has dissipated among members of the press, at least to the point that the frustration of trying to get answers out of the current administration has taken center stage, now that Trump is no longer pacing about the West Wing like a caged Neanderthal.

RELATED: Aloof, silent and disengaged: Why the Biden White House is in crisis

But the looming problem of a potential fascist overthrow of our government continues. When you have a former president involved in trying to seize voting machines, and telling fans at a rally that he'd pardon insurrectionists, you have bigger fish to fry than expressing consternation over the nuance of a $20 billion plan to build semiconductor chips.

To many, including some reporters, it seems like a binary situation. You must choose whom to support and whom to question. If one is evil, then the other must be good. But every president deserves criticism — and Joe Biden must be held accountable for those things he does in the name of the nation. The trick for us in the press corps is framing the narrative. While Biden deserves criticism, it isn't on the same level as the outright outrage leveled against the former president, who remains the driving force behind an effort to overthrow our government.

Recently a reader wrote to me: "How's your new pal Biden doing? Makes you miss Trump doesn't it? You may hate the man, but as president he was all about the USA." Nothing could be further from the truth. The former president was, and is, all about the grift — and if you can't see that, then you're the mark.

But Biden faces serious problems, and the whispers around Washington reflect legitimate concerns about his ability to face those problems. For example, on the semiconductor issue: The chip shortage has caused shift cuts at a Ford auto plant in Kansas and a General Motors plant in Brazil, has put a premium price on the PlayStation 5 and Xbox Series X video game systems, and has even forced Samsung to cancel its latest version of the Galaxy Note smartphone.

Having to spend more for cars and electronics, or having to wait a considerable amount of time to get them, is one thing. But there is a bigger picture. The collapse of the semiconductor supply chain, along with the increasing demand for cars and electronics, is exacerbating the trade war between the U.S. and China. And here's where it gets serious: Semiconductors are vital for the military, aerospace industry, telecommunications and AI industries.

Afghanistan is reportedly sitting on a $1 trillion deposit of rare earth materials used in high-capacity batteries, as well as copper, used in microchips and lithium.

While these things merit consideration, nothing on that scale is as frightening as an ex-president claiming that if he's re-elected he'll pardon those who rioted at the nation's Capitol while openly courting a civil war supporting racism and fascism.

As noted by Will Bunch in the Philadelphia Inquirer, the continuing existence of the former president has helped spawn a particular virulent strain of H.L. Mencken's "Boobus Americanus,"  including but not limited to "the woman in her Trump 2024 hat expounding that the 'Joe Biden' currently in the White House is fake and that the real one was assassinated at Gitmo in March 2019, another woman peddling a book containing all of Trump's tweets before he was banned from Twitter, and the guy peddling doses of the quack COVID-19 cure ivermectin while lashing out at anyone wearing a mask for trying to 'save Grandma.'"

Remember, there are people in the U.S. who believe that JFK Jr. and Trump will run together in 2024, and that the lizards who run our government are eating children and drinking their blood in a human trafficking operation being run out of the basement of a D.C. pizza parlor (which doesn't have a basement).

So the whispering about Joe Biden strikes a discordant note when comparing him to Trump and his minions. It seems almost perverse to criticize the current president for anything, compared to the batshit craziness of those on the other side of the aisle.

RELATED: Joe Biden still believes — but in the face of deepening cynicism, is that enough?

But the Democrats have a big tent and have for years. They regularly eat their own and continue to do so today. The many small camps of voters that roughly align themselves with the Democratic Party will continue to fight amongst themselves, allowing plenty of room for a minority of highly motivated, rabid-batshit voters and candidates who support insurrection and overthrowing the American government — making the coming midterm elections potentially earth-shattering.

Reporters who get blamed for the division will continue reporting — trying to juggle the need to report the warts-and-all of the Biden administration while reminding everyone that warts are nothing compared to the cancerous boils of the Trumpers.

And the whispers in study hall will continue.