Signs of life in Bidenland: President seizes the pulpit at last — will it change anything?

Biden finally comes out swinging, with a mix of humor, empathy and surprising naiveté. But is it too late? 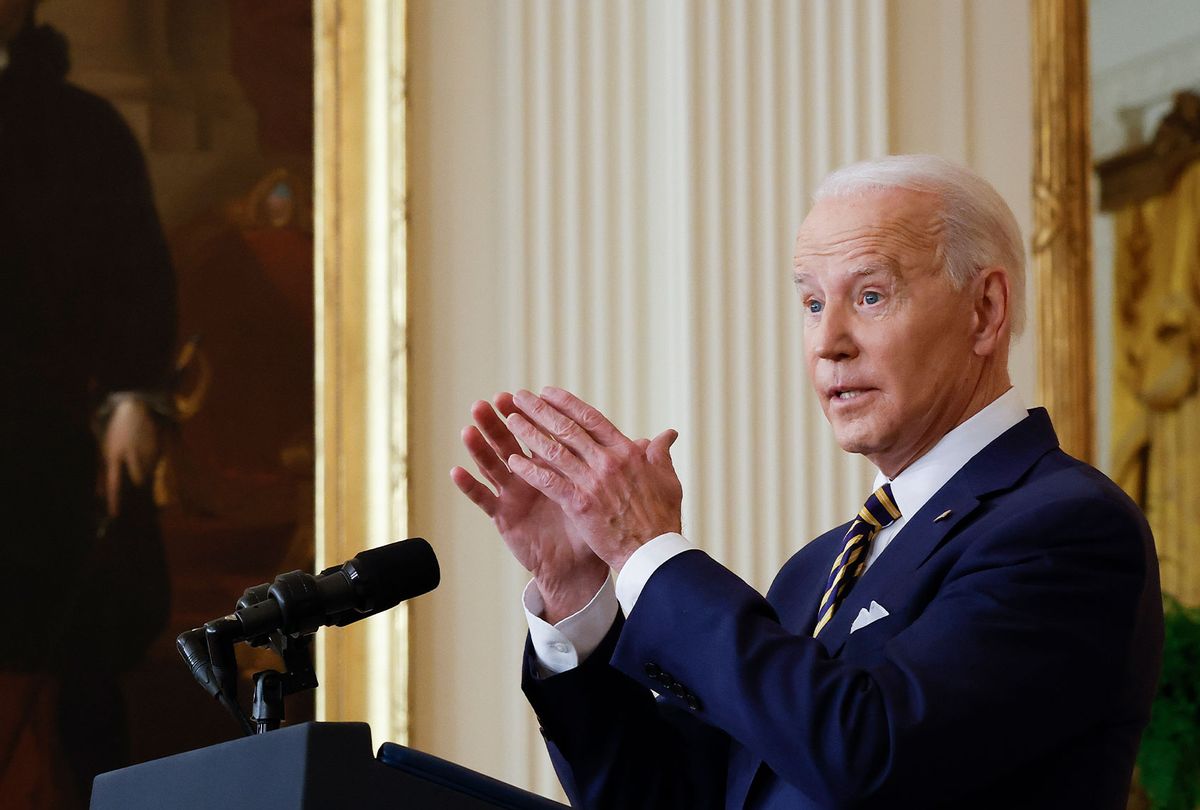 U.S. President Joe Biden answers questions during a news conference in the East Room of the White House on January 19, 2022 in Washington, DC. (Chip Somodevilla/Getty Images)
--

It took him a day short of one year in office for Joe Biden to find his bully pulpit.

But when he finally did, he did it with presidential aplomb.

Shortly after the lunch hour on Wednesday, an eager young staffer on President Biden's press team made her way into the basement of the West Wing, where pale reporters dwell and toil away in virtual anonymity, to introduce herself.

As she peppered me and reporters from McClatchy, Newsweek and the Los Angeles Times with information on her first week on the job, she told us what she'd like to see the president talk about in a news conference he planned later in the afternoon. "I'd like to see him tell us what the path ahead is in dealing with the Senate," she said matter-of-factly.

Biden, who's jonesing for any good news these days, has had little luck dealing with Congress — despite the Democratic Party holding a slim majority there. In fact, you might say that because of that slim majority he's been largely unsuccessful. He's had one solid victory — passage of the infrastructure bill. He has been unable to move his other big legislative package, the Build Back Better agenda. He's had little luck getting voting rights passed. He's had to deal with the omicron variant of the coronavirus. Russian actions in Ukraine have seemingly painted him into a corner. Inflation news has overcome the news of low unemployment. And members of his own party have criticized Biden for some of his actions as president. So far 2022 hasn't been kind to the man looked upon as a savior for a divided nation exactly one year ago when he walked into the Oval Office.

So on Wednesday, symbolically the last day of his first year in office, some in the press and even some members of his staff said he was going to "hit the reset button" on his administration with his press conference.

It is only the second time since he was elected that Biden has hosted such an event at the White House. His first came at the beginning of his term and because of the pandemic, fewer than two dozen reporters were allowed into the room.

This time he was allowing about 40 into the East Room, and he and his staff apparently took this press conference far more seriously than they'd taken other haphazard interactions with the press in the last year. Anticipation in the West Wing was palpable.

With little else on Biden's schedule and most senior communication staffers hunkered down behind closed doors most of the day, reporters prepared with a wide variety of questions on numerous issues. The young staffer said she was "excited" for the news conference.

Biden faces a closing window on getting meaningful legislation passed, and he knows it. His staff said on background that there's support within the White House for the president to travel more often and take his message directly to the American people. I naturally asked whether that meant we'd see more of him in the press room or around the White House to field more questions from us.

"After all, we're the American public too," I said.

I got a giggle with that comment, but, of course no commitment to more frequent press appearances.

Naturally enough, no one in the press believed much would be gained from Biden's press conference. However, the Democratic National Committee was so confident of his message they released word to the press that they would have a graphics and light display at the White House at 7 p.m. to cheer on Biden's first-year accomplishments. That move, as one reporter noted, was bound to draw a lot of criticism on social media platforms. "Sure, throw money at a light show," one observer said.

Meanwhile Joe Manchin, the Democratic senator from West Virginia, was scheduled to speak on the Senate floor during the president's press conference — once again proving how valuable attention-seekers are in our government.

RELATED: America got Scrooged by Joe Manchin — but Joe Biden believes in Santa

This underscores one of the key problems Biden has been unable to get a handle on as president: his promise to unify the country. Of all the things he had hoped to accomplish, it is the one farthest from becoming reality. He can't even get all the Democrats behind his agenda. That's not entirely his fault: No one could've predicted the omicron variant and the speed with which it ripped through the public. Few if any predicted the record inflation that has overcome the news of low unemployment.

But we all knew there were plenty of people in this country who remained skeptical of politicians, scientists and journalists. Many are willing to take horse dewormer, ingest Clorox or drink their own urine to combat a pandemic. Some mistakenly think their freedom has been compromised.  "I'm all for getting vaccinated," one person told me, "but I don't like the idea of forcing people to do it."

Really? I countered. "They just lined us up, when I was in grade school. We all got vaccinated or we didn't go to school. We certainly had no choice. Of course, we have no polio, diphtheria or rubella today, either. So, you know, there is that."

"Good point," I was told. "But I still value my freedom."

How do you argue with ignorance? It's impossible when "alternative facts" are being preached to us on a daily basis — and from lofty positions of power. Biden probably never had a chance to unify a country with seditious traitors among the Republicans in Congress who have promoted the "Big Lie" and remain resolutely dishonest about what happened on Jan. 6, 2021.

By the time reporters gathered at the Palm Room door in the White House to enter the East Room for Biden's much anticipated press conference, the speculation was that he'd take "maybe 10 questions." Several reporters opined that they had a "notebook full" of questions they knew would remain unanswered because they wouldn't get to ask them.

This set the stage. The delivery was ... typical Joe Biden — or, more accurately, the "typical" Joe Biden I remember from his time in the Senate. The president held court for nearly two hours, taking all questions, belittling no one even when they asked him remarkably stupid things and handling it all with a sense of humor.

He started out talking about his success in getting people vaccinated, putting people to work and cutting health insurance premiums. "We know there's a lot of frustration," he said, adding that much of that frustration was due to the COVID pandemic. "For many of us it has been too much to bear." He again reminded people of the obvious; "Vaccinations work. So get your vaccination now. Please."

The second challenge, Biden said was "rapid price increases." He didn't utter the word inflation. "A more productive economy" and a "growing economy" could fix the problem, he said, adding that passing his Build Back Better agenda and repairing supply-chain disruptions by the pandemic would help.

Biden admitted to two mistakes. First, he said he had not communicated to the American public well enough in the last year. It was a problem of my own making by not communicating as much as I should have," he said. I can't disagree. I've said the same thing myself in at least two columns.

RELATED: Aloof, silent and disengaged: Why the Biden White House is in crisis

Biden also admitted he has so far failed in "getting my Republican friends" to the table to help pass at least some of his agenda. He said he did not anticipate such a "stalwart effort" from the Republicans to block him. "Name me one thing they're for," Biden said, in pointing out the naked aggression of a party filled with fascists who only want power and control, but have no idea how to make things better in this country.

I think he made another mistake there — or he must be kidding. Biden served in Barack Obama's White House for eight years. He knew damn well what the Republicans planned to do to stall him. He'd seen it before. Did he honestly believe the GOP had changed? If so, that was pure naiveté. The Republicans have shown absolutely no desire to be reasonable — and few in that party treat Biden with any type of friendship or camaraderie, at least in public.

Biden made it clear his major change in tactics will be to stage a traveling roadshow to convince the American public he has the best ideas. He is finally beginning to understand the need to communicate more often with the electorate. What a concept! Every minute he spends on television and in the news cycle is one minute less for the seditionists and traitors who promote absurdities and deny science.

He also addressed the problems of journalism, noting that today news consumers look for content that supports their pre-existing opinions, instead of facts that might let their opinions evolve. It was almost like he read my book.

At the end of the day, Biden had called on nearly two dozen reporters and handled himself as he always does — pedantically, intelligently and empathically — with a dash of humor thrown in for good measure. There were no startling revelations, no true surprises. There was a commitment to break up his BBB legislation to get portions of it passed, arguably the biggest news announced.

Most voters, even those who claim to hate him, don't think Biden is as caustic as his predecessor — or as incompetent or overbearing. It's just that a growing number of people don't know what to believe because of competing narratives, and don't see Biden doing much to quiet those who say he's failing.

Biden repeatedly said that he was surprised, after all his years in Washington, that a man who is no longer in office could influence and intimidate the GOP such that they all fall in line. "Not one" member of the GOP would oppose Donald Trump publicly, Biden noted. He noted that 16 Republican senators who previously voted for voting rights won't do so today.

Again, it was startling to see the naïveté of a sitting president when it comes to Washington politics.

In the end, Biden promised three things in terms of changing direction: getting out more, campaigning hard in the midterms and seeking advice from experts and editorial writers.

If Wednesday's press conference was a reset button for his administration, the proof of whether or not it works will be seen in November — and in whether Biden can get voting rights legislation passed in any form, along with any portion of Build Back Better.

Whatever else, Wednesday's appearance proved Biden needs to face the press more frequently and for greater lengths of time. It does us all good. If he can get Joe Manchin to sit down and shut up — well, that's just icing on the cake.

More from Brian Karem on the trials and tribulations of the Biden presidency: