There are 11 contenders, but just two have attracted national attention: Morgan Luttrell and Christian Collins 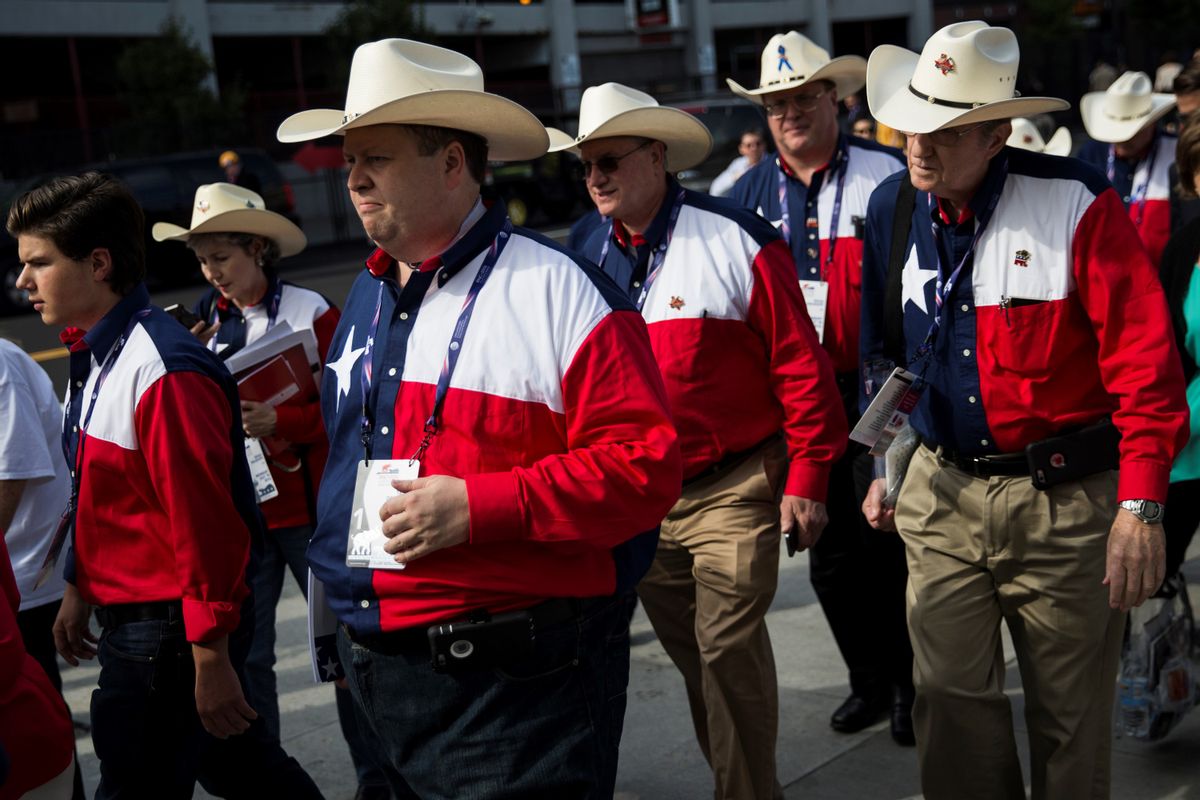 The race to succeed retiring U.S. Rep. Kevin Brady, R-The Woodlands, has boiled over into a tense proxy war, with some of the best-known Republicans in Texas — and the country — split between two of the leading candidates.

The March 1 primary features 11 contenders, but the battle between the GOP factions has centered on Morgan Luttrell and Christian Collins.

Luttrell is a former Navy SEAL backed by former Gov. Rick Perry, Lt. Gov. Dan Patrick, U.S. Rep. Dan Crenshaw of Houston and the top super PAC aligned with House GOP leadership. Collins, meanwhile, is a young political operative who has the support of U.S. Sen. Ted Cruz, the campaign arm of the House Freedom Caucus, and some of the most ardent pro-Trump Republicans in the House, like U.S. Rep. Marjorie Taylor Greene of Georgia, who was permanently banned from Twitter last month for spreading COVID-19 misinformation.

There are few notable policy differences between Luttrell and Collins — they both fervently want to secure the border, restrict abortion and protect gun rights. But at least one of them sees the race as having implications for the future of the GOP, pitching himself as more of a pro-Trump warrior who will battle leadership.

"[Luttrell] is lining up with the establishment in Washington, and I'm lining up with those who are the tip of the spear," Collins said in an interview, calling himself the "true pro-Trump conservative" in the primary. However, he acknowledged it is a "very divided community right now."

Indeed, the race is not as clear-cut. While House GOP leadership is pulling for Luttrell, he also has Trump loyalists in his corner, like U.S. Rep. Ronny Jackson of Amarillo, and has the endorsement of the leader of the Texas House Freedom Caucus, state Rep. Mayes Middleton of Wallisville.

Luttrell has so far run a campaign less driven by contrast, trying to keep the focus on his background as a military hero who came home and did right by his community. But at a forum Wednesday night, Luttrell fired back at Collins' criticism of his support that is linked to House GOP leadership.

"I got those PAC donations because I'm a better candidate, plain and simple," Luttrell said, adding that he is "not the candidate who got … almost a million dollars by one person" — a reference to a pro-Collins super PAC donor. "I'm supported by all these people across the country, in this state and by those PACs because no one can hold a candle to my resume, my experience and my fortitude. Period."

Collins has pledged to join the congressional Freedom Caucus if elected, while Luttrell has not made the same commitment, saying he first wants to get to Washington and survey the landscape. That has helped drive the wedge for Collins and his allies — including Cruz, who recently spent a day in the district campaigning with Collins and assuring voters he has the "guts" to stand up to House leadership.

Luttrell was unavailable for an interview for this story.

The race was triggered by Brady's announcement in April that he would not seek reelection after a long tenure during which he ascended to the top of the powerful House Ways and Means Committee. His 8th Congressional District, which spreads from the northern Houston suburbs into more rural territory, has been safely Republican and stayed that way through redistricting, meaning the primary will effectively decide his successor.

Brady — who carved a path as both friendly to Trump and loyal to House leadership in recent years — is staying out of the race.

Luttrell has been a candidate for months longer than Collins has, and he has emerged as a formidable fundraiser, raking in $1.2 million in the fourth quarter of 2021. But as the March 1 primary nears, Republicans are watching to see if the two will head to a runoff — where the intraparty feuding will likely only intensify.

While trailing Luttrell in campaign fundraising, Collins has been boosted by a trio of super PACs that have spent over $800,000 on his behalf. At least two have them appear to have been overwhelmingly funded by Robert Marling, a Woodlands banker and friend of Cruz. The outside groups have heavily spent in support of Collins, though one of them, Texans for Freedom, has also disclosed anti-Luttrell expenditures.

That group has at least one billboard up in the district attacking Luttrell over his support from Crenshaw, who has emerged as something of a lightning rod in the race.

The rising-star Republican, who is also a fellow former Navy SEAL, has backed Luttrell since the first days of his campaign. But his involvement in the primary took on a new light in early December after he made national headlines for invoking the House Freedom Caucus while warning about "grifters" and "performance artists" inside the GOP — at an event alongside Luttrell, to boot. Crenshaw later denied he was singling out the Freedom Caucus with the comment, but it caused an intraparty furor and made Collins' allyship with the Freedom Caucus more relevant.

Collins has done political work for Crenshaw previously, but he said he now shares the view of prominent Houston radio host Michael Berry, who recently said he no longer supports Crenshaw and is "embarrassed I helped him win."

"Christian Collins used to work for me," Crenshaw said in a statement. "He's a nice kid but his professional career has only been on campaigns. His opinions change with the political winds. For instance he wrote a master's thesis advocating for amnesty for illegal immigrants, and tried to have the paper withdrawn once he realized it was bad politics."

That is a reference to Collins' Liberty University thesis, which was published in 2013 and posited that Republicans could be more compassionate on immigration to win over Hispanic voters. It was written in the shadow of the 2012 presidential election, when the GOP grappled with whether its nominee, Mitt Romney, had been too hardlined on the issue. The university site where Collins' paper was once available says it "has been withdrawn."

Asked for comment on Crenshaw's criticism, Collins pointed to an interview he gave Breitbart last month distancing himself from the paper, emphasizing it was written "almost 10 years ago" and saying he has since "spent my entire adult life fighting for conservative principles, most importantly border security." He is now running on a hardline immigration platform, including opposition to a path to citizenship and support for decreasing overall immigration.

Collins and his allies are also targeting Luttrell's loose affiliation with U.S. Rep. Adam Kinzinger of Illinois, a leading anti-Trump Republican who is on a mission to purge his party of the former president's influence. Luttrell's campaign reported receiving a $5,000 donation — the maximum amount — from a Kinzinger political action committee in August.

At a January forum, Luttrell professed ignorance, saying he does not involve himself in his campaign's fundraising and "didn't know the check was cashed." He said his campaign returned the check when they realized who it was from, while adding that he served in the military with Kinzinger and does not hold "any ill will" toward him.

"I don't believe in anything Adam's doing right now," Lutrrell said. "I don't back his politics at all. But I don't hate that man. I'm a practicing Christian, and he and I served together."

However, there are conflicting reports around how they got the donation in the first place. The Hill reported in December that Luttrell had asked Kinzinger for a donation, and a Kinzinger spokesperson, Maura Gillespie, confirmed to The Texas Tribune that the congressman made a contribution "because it was solicited."

"I don't know what Morgan knows or doesn't know," Collins said, "but the bottom line is Adam Kinzinger, to Republicans, is a traitor."

Collins' political ambition has long been apparent. He worked on Cruz's 2016 presidential campaign, serving as an aide to Cruz's father and campaign surrogate, Rafael Cruz. Collins went on to work as campaign manager and adviser to Brady. And in 2020, he started the Texas Youth Summit, an annual gathering for young conservatives in suburban Houston where Cruz, Crenshaw and other members of Congress have spoken.

Luttrell does not have nearly as much of a political resume. He retired from the Navy in 2014, and when Perry became Trump's emergency secretary a few years later, Luttrell went to work for him as a special adviser. Luttrell got an executive certificate in professional leadership development from Harvard Business School, and he currently serves as an adjunct professor at Sam Houston State University, teaching law enforcement leadership, while running a small business.

One major Republican voice has not weighed in on the primary yet: Trump. Both Collins and Luttrell are lobbying for his support.

Collins in particular is working to prove his pro-Trump bona fides, not only highlighting the donation by Kinzinger — whom Trump loathes — but also aligning himself with those who echo Trump's conspiratorial obsession with the 2020 election results. On Wednesday, Collins got the support of Wendy Rogers, a far-right Arizona state senator who has led the charge to undermine Trump's reelection loss there.

Trump raised speculation that he could get involved by staging a rally Saturday in Conroe, one of the biggest cities in the district, but he did not address the race there. Both Collins and Luttrell attended, and Perry showed up in a Luttrell campaign sweatshirt.

The race is personal for the former Texas governor. He is especially close to the Luttrell brothers and has a father-son-like relationship with Marcus Luttrell, who the Perrys took in after he showed up unannounced at their residence in 2007.

Luttrell also has a critical Trump ally on his side in Patrick, the lieutenant governor, who the former president has openly touted as the top broker for his Texas endorsements. Patrick, the presiding officer of the state Senate, endorsed Luttrell relatively early, acknowledging he does not normally issue endorsements outside Senate races "unless it's something very special to me."

For now, though, Trump's plans for the primary remain a public mystery. In the lead-up to Saturday's rally, a Trump spokesperson declined to say whether Trump would choose a candidate for the 8th Congressional District.

"Not a two-man race"

Nine other Republicans are on the ballot, and they have been vocal about their displeasure with the spotlight that has followed Collins and Luttrell.

"This is not a two-man race," another candidate, Dan McKaughan, said at the January forum, suggesting that the "D.C. and Austin establishments … want to continue the status quo" with their preferred contenders in the primary.

Luttrell is not the only veteran running. McKaughan is a retired Navy lieutenant commander, while another candidate, Jonathan Hullihan, was a Navy judge advocate general. Hullihan has the backing of U.S. Rep. Paul Gosar of Arizona, a member of the Freedom Caucus.

But in addition to their endorsements, Collins and Luttrell have led the way in financial support — and especially Luttrell. He has raised almost $2 million since announcing in June, and his $1.2 million haul in the fourth quarter made him one of the top congressional fundraisers anywhere in Texas. Collins, who entered the race in early October, raised $334,000 through December.