How far is too far for Texas Republicans? For Don Huffines, aide tied to “groyper” guru Nick Fuentes is no problem 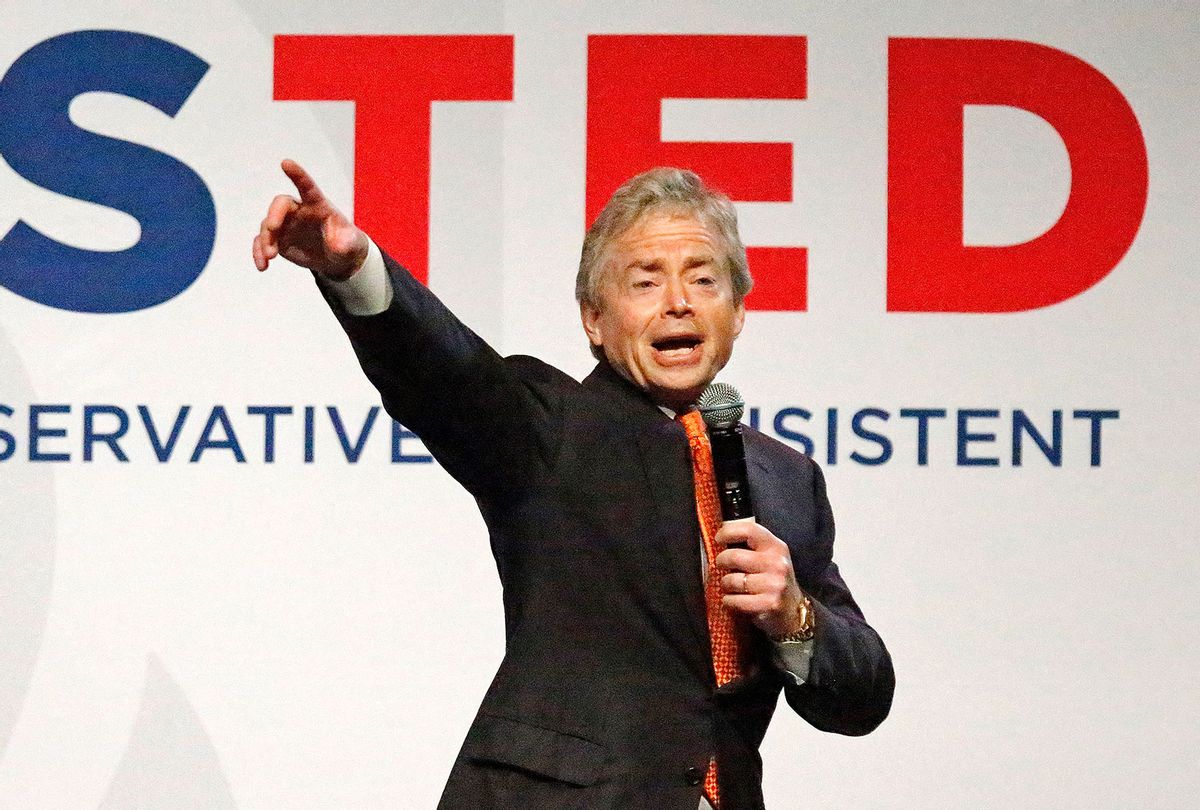 The Texas Republican gubernatorial primary has shaped up, as journalists in the Lone Star State have observed, into a "contest of extremism," with the various challengers to already-very-conservative Gov. Greg Abbott competing to one-up each other's right-wing credentials. Last week, that even included an awkward remake of Clint Eastwood's infamous 2012 speech at the Republican National Convention, as three of Abbott's opponents gathered at a roundtable hosted by the tea party-affiliated True Texas Project to argue against an empty chair with the governor's name on it.

But in the race to the right, one Republican candidate stands alone: former state senator and real estate developer Don Huffines, who has promised to "stop the illegal invasion of Texas" by migrants, vowed to reinstate prayer in school, described gender-affirming medical treatment for trans youth as child "sexual abuse" and "predatory grooming," and took credit for scuttling two diversity training programs being used by Texas's child welfare department after publicly calling them "Marxist" critical race theory. The Texas Democratic Party has denounced Huffines' anti-immigrant rhetoric as identical to that which drove the 2019 mass murder in El Paso, and warned that his attempt to "scoop up extremist primary voters" comes at the expense of Texans' safety. The progressive media company Texas Signal called him "the most dangerous man in Texas" (a tribute Huffines immediately shared on Facebook), and media across the state have attributed Abbott's rightward moves to Huffines' influence.

But Huffines' seeming victory as king of the right isn't just about his positions or his rhetoric. It's also because of who he's hired.

On Saturday, Ben Lorber, a researcher at the progressive watchdog organization Political Research Associates (and, full disclosure, my former colleague), reported that Huffines appears to have an open white nationalist helping run his campaign. Until this week, Jacob Lloyd Colglazier, a 24-year-old former leader within the far-right America First or "groyper" movement, who's better known online as just Jake Lloyd, was advertised as Huffines' deputy communications director for three upcoming events hosted by the True Texas Project. (Since PRA's report, the tea party group, whose entire board backs Huffines, appears to have removed language connecting Lloyd with the campaign, but the original description can be seen on archived pages.)

Although Huffines' campaign website doesn't list staff online, and, in an emailed statement to Salon Huffines said "Jake Colglazier is not my deputy communications director" but someone who has "done field work for my campaign," on Jan. 14, a staffer at the campaign's headquarters confirmed to Lorber that one Jacob Lloyd Colglazier was indeed their deputy comms director.

So who is Jacob Colglazier, or Jake Lloyd?

As Lorber reports, Lloyd initially gained a platform as a host on Alex Jones' conspiracy-theory outlet Infowars before becoming a leading figure in the America First movement around 2019. Founded by livestreamer Nick Fuentes, who garnered his own infamy participating in the deadly 2017 "Unite the Right" protest in Charlottesville, Virginia, the America First movement has largely supplanted the "alt-right" over the last several years. It helped lead the 2020 Stop the Steal protests and regularly traffics in "white genocide" and "great replacement" conspiracy theories. The movement's overwhelmingly young, male followers are also known as "groypers," for their adaptation of the alt-right mascot, Pepe the Frog.

Last February, Fuentes and his groypers drew national attention when Rep. Paul Gosar — the notorious Arizona Republican who may be the most right-wing member of Congress — delivered the keynote address at their annual America First Political Action Conference in Orlando. The conference, where Fuentes said the conservative movement "need[s] a little bit more of that energy" seen last Jan. 6, was timed and placed to collide with the simultaneous meeting of the somewhat more mainstream Conservative Political Action Conference (CPAC), happening nearby. That sort of attack-from-the-right stunt has become the calling card of the America First movement, which rose to prominence three years ago after a series of public confrontations with other right-wing leaders — from Donald Trump Jr. to Turning Point USA founder Charlie Kirk — whom they derisively grouped together as "Conservative Inc."

It's the sort of rapidly shifting Overton Window — Don Jr.: mainstream RINO? — that seems to demand a new vocabulary to describe the competing factions of the ever-more-radical American right. But as Lorber, who has reported on Fuentes for years, noted earlier this month, that's exactly the point. As Fuentes put it last spring, "My job, and the job of the groypers and America First, is to keep pushing further," and drag conservatives "kicking and screaming into the future, into the right wing, into a truly reactionary party."

Within that movement, Jake Lloyd became a leader and YouTube personality, describing himself as "heavily involved" in the 2019 "Groyper Wars" against "Conservative Inc." As Lorber reports, he was a featured speaker alongside Fuentes at a 2019 "Groyper Leadership Summit" (held to coincide with a Turning Point USA summit), and in November 2020 joined Fuentes for an election-night livestream. Lloyd was an active participant on noxious far-right discussion forums, including the so-called "Nick Fuentes Server" on Discord, as well as another forum he established himself, "American Dissident," where members talked about "Aryan bloodlines," Nazi salutes, and called for "death to all minorities."

In his livestream show, which has been banned from various streaming services and is now hosted on the largely unregulated DLive, Lloyd waxed on about "restoring historical America … which means by and large maintaining a supermajority of the original stock of the United States," and complained about "the fact that my race is dying." And, in a series of disturbing videos Lorber unearthed, Lloyd also used his platform to say that he "spit[s] on George Floyd"; to celebrate a video of police killing a Black man with an impromptu sing-song tribute to cops; and to pound his fist into his hand while showing a photo of an Asian woman who Lloyd said "needs to be in China, getting the shit beat out of her by her husband."

Lloyd also isn't the only groyper-aligned, or at least groyper-curious member of Huffines' staff. Several weeks ago, the right-wing website Current Revolt published a profile of their favorite young Texas political activists, all of whom support Huffines. Among them was Huffines' son Russell, who said he's working on his father's campaign, and described "Jake Colglazier" as "without a doubt" his "favorite right-wing e-celeb." Another profiled activist working for the Huffines campaign, Konnor Earnest, told the website that he regularly watches Fuentes' show.

The depth of support for Huffines' campaign on the far right, and sometimes their open association, could be a sign that groups long excluded from the more polite quadrants of conservative politics are increasingly finding their way inside. As Lorber wrote in his report last weekend, "Lloyd's embrace of Huffines' campaign can be seen as one application of the groyper movement's broader strategy to accelerate the rightward drift of the conservative movement, in order to move White nationalism mainstream in the post-Trump era."

Since PRA published Lorber's report, Fuentes seemed to offer a protective distancing from Lloyd, posting on Telegram that Lloyd "is no longer affiliated with Nick Fuentes or America First — please issue a retraction!"

That, said Lorber, might be significant, "because it says that Fuentes, and his ideas, are still toxic and it's dangerous for people in mainstream politics to associate with them."

On his own Telegram account on Jan. 18, Lloyd, who didn't respond to requests for comment, seemed to allude to the controversy, quoting the Bible's Psalm 17, a call for divine intervention on behalf of the righteous: "Mine enemies compass me round about, to take away my soul. Up, Lord, disappoint him, and cast him down; deliver my soul with thy sword from the ungodly."

In a statement to Salon identical to one the campaign gave HuffPost, Huffines said, "I have 12 field offices across Texas and over 70 people on payroll with my campaign. If I were to go through the social media history of any young Texan I would find something I disagree with. My campaign will not participate in cancel culture." But on Wednesday morning, the candidate seemed to offer another response as well, with a terse tweet reading, "America First. Texas First."

More from Salon on the mainstreaming of the far-right fringe: