At one Texas school, LGBTQ teens call onslaught of hostile laws "matter of life and death"

Facing a tsunami of anti-LGBTQ laws and regulations, teens in one Texas district say it's a mental health crisis 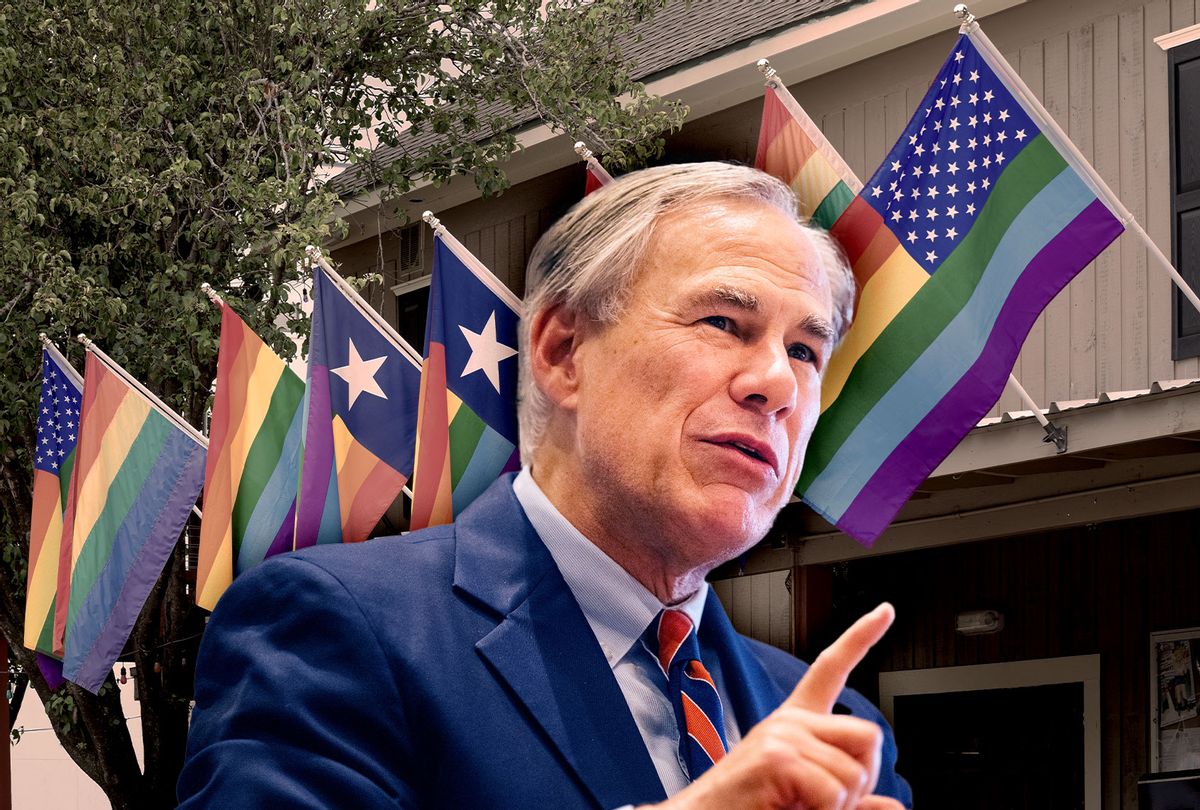 For 17-year-old Kayla (her name has been changed to protect her identity), coming out is a matter of survival. But faced with the possibility of being kicked out of her home and denied relevant mental health resources at her school, and confronted with mounting anti-LGBTQ policies in Texas, Kayla has decided to keep quiet about her queer identity, leading, she says, to occasional thoughts of suicide.

"There was no one that I could really talk to during this period," Kayla said. "I didn't want to become a burden to other people. So just having to sit with those thoughts was definitely not healthy for me. I definitely no longer wanted to live on this earth."

Crisis calls from Texas teens to the Trevor Project, a suicide prevention organization for LGBTQ adolescents, have shot up by more than 150% in the past year, the organization says. While the spike cannot be attributed to one specific cause, the culture wars targeting queer youth in Texas have escalated — in one recent example, a high school senior in a suburb of Houston faced off against parents over internet access to LGBTQ resources and literature.

Cameron Samuels, a classmate of Kayla's at Seven Lakes High School in Katy, Texas — a community of about 22,000 directly west of Houston — appeared at a school board meeting last month to ask the district to remove an internet filter on LGBTQ mental health resources, but was drowned out by parents' calls to remove books with LGBTQ content and their demands to enforce Texas State Rep. Matt Krause's probe into book titles pertaining to race and sexuality

Samuels, an 18-year-old senior, and other students have collected 1,000 student signatures on a petition calling on the school district to remove a firewall on the high school's internet service that blocks various kinds of LGBTQ-oriented online resources, including sites related to suicide prevention, and to expand the district's anti-discrimination and anti-bullying policies to include LGBTQ students.

"It is a matter of life or death," Samuels said at the December school board meeting, which was streamed on the Katy school board website.

According to its 2021 National Survey on LGBTQ Youth Mental Health, the Trevor Project reported that LGBTQ youth are four times more likely to consider or attempt suicide than their straight peers. Among LGBTQ respondents, 42% reported considering attempting suicide last year, while 94% reported that recent political developments had negatively affected their mental health. Nicholas Turton, communications manager for the organization, reported that more than 14,500 of the 201,000 crisis calls received in 2021 alone were from LGBTQ teens in Texas, a 150% increase compared to the previous year. While the increase in crisis calls cannot be attributed to one specific cause, the Trevor Project noted that transgender and nonbinary youth in Texas have directly stated that they are stressed, using self-harm and considering suicide due to anti-LGBTQ laws being debated (or enacted) in their state.

During the 2021 legislative session, Texas lawmakers introduced 75 pieces of anti-LGBTQ legislation, including more than 40 bills specifically targeting transgender and nonbinary youth — more than any other state in the U.S.

The state's efforts to curtail access to LGBTQ resources have also inspired local school board politics.

Parents at the recent Katy Independent School District Board meeting cited explicit sexual content from several books as cause to enforce Krause's book probe. LGBTQ students responded by saying that their calls to be protected under existing anti-discrimination and anti-bullying policies, to be represented in the curriculum and to access mental health resources are being sexualized. Late last year, the Katy district changed the internet filter blocking LGBTQ mental health resources from "alternative sexual lifestyles" to "human sexuality."

"It's saying that LGBTQ resources such as the Trevor Project are inherently sexual, when in reality, they are not," said Samuels, the high school senior. "We've searched up several websites related to human sexuality, but for straight people. For example, marriage websites, Planned Parenthood, RAINN and all those websites were accessible. So it's showing that human sexuality is only harmful if it is homosexual."

"It's tough to not be able to be fully honest and live as myself to the most important people in my life," said 18-year-old Grace, another Seven Lakes student who started the petition to remove the internet firewall and didn't want their identity revealed. "My mental health has suffered in high school. I haven't been able to access any mental health treatment or therapy,"

During a November Katy district board meeting streamed and posted on the district's website, parents expressed dismay at what they said were increasing numbers of teens openly identifying as LGBTQ.

"I can't even recognize this district," parent Karen Perez said. "I'm asking you, board, what has changed? How does this happen? Look at how our library's propaganda works on impressionable minds. We need parents on these library committees to vet these books."

Another parent during a December board meeting called for any materials or discussion dealing with gender and sexuality to be removed from the school curriculum and left up to parental control at home.

Kayla said that many LGBTQ students do not feel that they can explore issues of their gender and sexuality at home.

"School is often the one safe haven for students," she said. "Their wifi is being tracked at home or their search history is being tracked. They don't feel safe looking up resources while at home. I was always taught at home that if you are anything other than straight/heterosexual that you will not go to heaven. I remember a girl had come out to our church group. As soon as she left for the bathroom, our group leader started talking about how gay people are going to hell. It was scary, really. I'm still young, and I'm still dependent on my parents. I can't risk being kicked out or disowned right now."

According to the Trevor Project's study, LGBTQ youth who had at least one LGBTQ-affirming space had a 35% reduced chance of a suicide attempt.

Kayla said that in 2019, the Seven Lakes High principal required students who wanted to participate in the Pride Club and appear in the club's yearbook photo to have a permission slip signed by their parents. The ensuing fallout led to kids fighting with their parents, the club disbanding and the yearbook adviser resigning, according to the U.S. Press Freedom Tracker.

A month before launching his book probe, Krause, a Republican, had announced his plans to run for state attorney general, but has since dropped out to run for district attorney in Tarrant County instead. Krause hasn't offered any details on how he compiled his book list. But he is a paid public speaker for the Christian organization WallBuilders, whose stated goal is "educating the nation concerning the Godly foundation of our country and providing information to federal, state, and local officials as they develop public policies which reflect Biblical values, and encouraging Christians to be involved in the civic arena." WallBuilders founder David Barton has previously said, "The Bible says the law is made to regulate sexual immorality, whether it's homosexual or whatever."

Other right-wing political action committees, such as Act in Action, Cherry Tree Republicans, Recover America and the Conservative Coalition of Harris County, have financed the recent wins of conservative candidates in local school boards, including in the Klein, Cypress-Fairbanks and Houston school districts, all in Harris County. (With 4.7 million residents, Harris is the most populous county in Texas and the third most in the entire country.)

The PAC Conservative Republicans of Harris County sent a mailer out to voters in the Cypress-Fairbanks and Houston districts stating that their endorsed candidates "promote biblical marriage" and the principle "'God created them male and female'" while claiming their opponents "accept, affirm, and celebrate perverted sexual lifestyles and promote pedophilia."

Since the students at Seven Lakes High delivered their petitions, the Katy Independent School District still hasn't unblocked district internet access to LGBTQ resources such as the Trevor Project. It has, however, set up an online parental book review.

"The school board listened to those parents," said Samuels, meaning the parents who complained about library materials, "but then refused to make a comment on our issue. Knowledge is power, and ignorance is also power. It's so important to have access to information and not block websites or pull books from libraries or censor information. It's inevitable that some people are going to open up and become part of the LGBTQ community or believe in certain political ideologies. Shutting off that information — that is how these elected officials are trying to protect their power. But they are not in the majority."

Along with Grace and Kayla, Samuels will graduate from high school this year. Grace looks forward to a more inclusive college environment and for the freedom to come out, saying: "I hope to live and love openly."

To other LGBTQ teens in Texas who've had similar experiences and feel they cannot come out to family, teachers and peers, Grace said: "Know that you are loved, and there will be people in this world who will love you and accept you for who you are. I promise there will come a day where you'll be able to live as yourself."

Read more on the GOP pushback against LGBTQ rights:

Josephine Lee has written for the Daily Beast, Common Dreams, Indypendent and the Village Voice. She is a high school educator in Houston.