"We live in Walmart nation": What it means to be trans in Arkansas 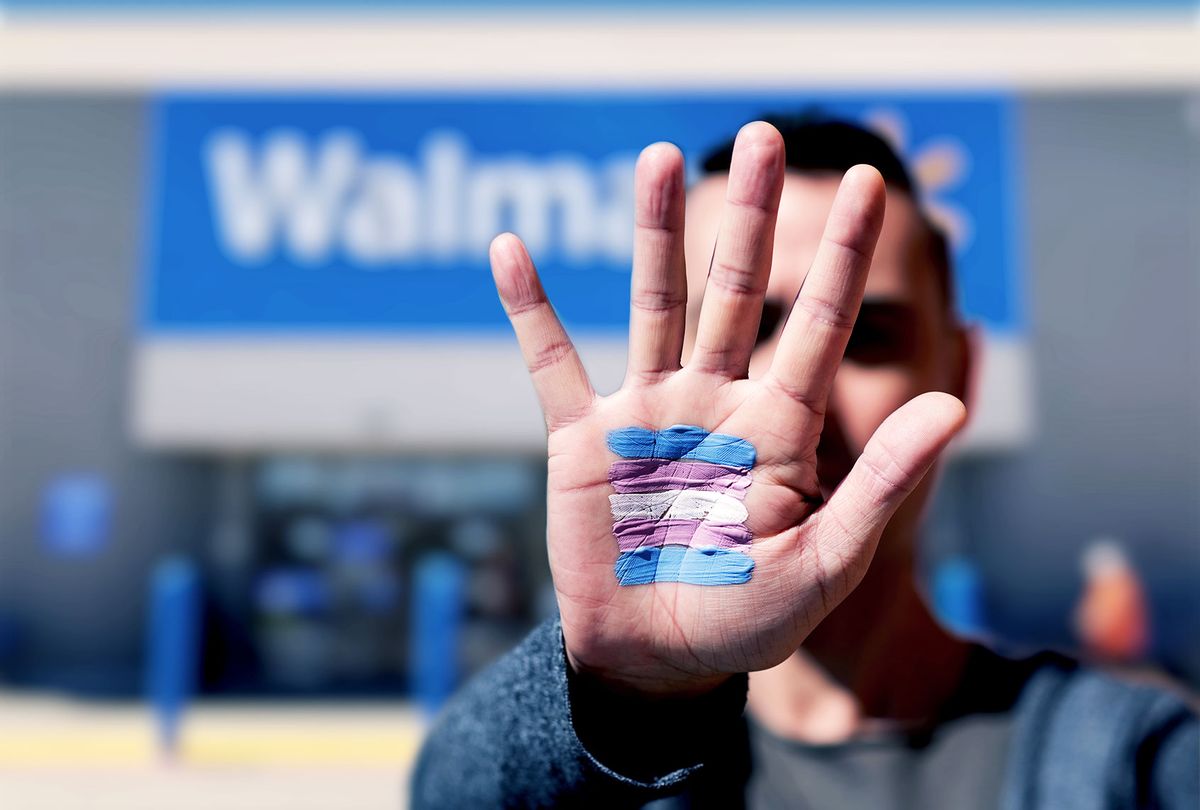 Being trans at Walmart (Photo illustration by Salon/Getty Images)
--

Until recently, Bentonville was a small sleepy town inside a dry county situated in the northernmost corner of the state of Arkansas. Thanks to Walmart heirs, it's quickly being transformed into an arts and cultural destination that began in 2011, when Alice Walton opened Crystal Bridges Museum of American Art. With a net worth of currently $66.3 billion, she has enough cash to throw around that she's just announced a 50% expansion of the museum.

The museum boasts an impressive collection and inclusive programming. Distinguished speakers have included #BlackLivesMatter creator Patrisse Cullors and avant-garde icon Laurie Anderson. A promotional post for a Pride Night event exclaims, "throughout history, the art world often offered 'safe spaces' of acceptance for people's differences, and signified that there was a place of belonging for those who felt outcast and marginalized, a place that was welcome to all, just like Crystal Bridges is today." A Washington Post editorial even asked, "Is Crystal Bridges, in rural Arkansas, the most woke museum in America?"

This seemingly progressive and shiny cultural mecca, however, feels in direct opposition to the recent spate of anti-trans legislation in the state.

Earlier this month, Arkansas became the first state in the country to ban gender-affirming care for transgender youth. The so-called "Save Adolescents from Experimentation Act" (HB 1570) bans doctors from providing puberty blockers or performing hormone therapy. Other bills passed this legislative session include one that allows medical providers to refuse to treat members of the LGBTQ community and another that bans transgender girls from competing on women's sports teams in school.

Some organizers point out the disparity between the seemingly performative actions of the many institutions and businesses that espouse diversity, equity and inclusion, as the state rams through the most draconian anti-trans legislation in the country by legislators bankrolled by these same entities.

"This is a state-sponsored hate crime and state-sponsored violence," Intransitive director of strategy and communications Rumba Yambú tells Salon. "Whenever your representatives stand there and talk about how they have to save children from becoming like me, what are they trying to say about me? What is so horrible about me that you have to pretend to protect children from it? They're sending a message to all trans Arkansans."

Intransitive is the state's most active and visible trans rights organization. When we connect over the phone, Yambú is busy working on social media graphics to post to raise awareness about more anti-trans legislation hitting the chamber floors and preparing for Trans Week of Mourning that kicked off Monday, a week filled with direct action and visibility for the trans community, that ends with a Trans Day of Celebration Saturday, April 24, in Little Rock.

Diane (an alias used to protect her identity) is a 42-year-old trans woman who works in accounts receivable for a Northwest Arkansas business. As a lifelong Arkansan who grew up in an extremely religious and conservative family, she's devastated by the recent legislation and the message it sends to trans youth.

"I think back to the kids who were like me growing up. I was completely kept in the dark about any of this stuff until relatively late in life. I had these impressions that all trans people go through," she says. "The cliché is your body not matching the person you are inside."

Had she known about puberty blockers back then she would have wanted to explore them, since she knew early on that there was, as she describes it "something different" about her. She was envious of her sister.

"I remember crying because I didn't get the same kind of clothes she got," she recalls growing up in the 1980s. "Puberty blockers or even being transgender weren't things I knew anything about. Now that the knowledge is out there, that should be something that everyone is able to explore."

She thinks the current government overreach doesn't align with the support she's personally received from her own community.

"We have a government here that I think is out of step with what average people think about the issue, that is trying to have this draconian clamp-down on stuff that's just about people being able to explore who they are. And I don't think that it will stop with children."

Diane only recently came out at work because she couldn't hide her identity any longer. She described the process as "just the easiest thing in the world.

"Everyone at work was totally accepting. And it is not a liberal workplace by any means. It's relatively conservative and Christian, and those people were all great."

Her boss and HR were both extremely accommodating for her needs. They asked her what she wanted to be called and asked if she wanted to start using the women's restroom immediately saying "This is totally cool. No problem whatsoever."

"That's by far the worst experience as far as someone being confrontational about it," she says. "So I just really don't think that the average person in Arkansas cares."

Meanwhile, it's the average Arkansan who is becoming less in demand as Northwest Arkansas is seeing record growth, thanks in part to the Walton-funded cultural amenities and a national push to market the area as a progressive oasis in a pristine natural setting  –including an incentive that attempts to woo highly skilled urbanites to move here with $10,000 and a mountain bike. Because of this growth, property values and real estate in that area have gone through the roof, leaving residents not able to afford a home where they once grew up.

Some lifelong residents have had enough. Though Diane feels comfortable here personally, the recent spate of anti-trans legislation led her to make the decision to move away with her trans husband. They'd dreamed of moving someplace more aligned with their lifestyle before, but felt no urgency about making such a big decision until now.

"It's literally pushing us out of the place that I've lived my whole life," she says. "I don't see much hope going forward for the state, unfortunately."