My friend recently became a nurse — what timing, right?

Hospitals are overloaded. Health care professionals are exhausted. My friend Kerry decided this was her fight 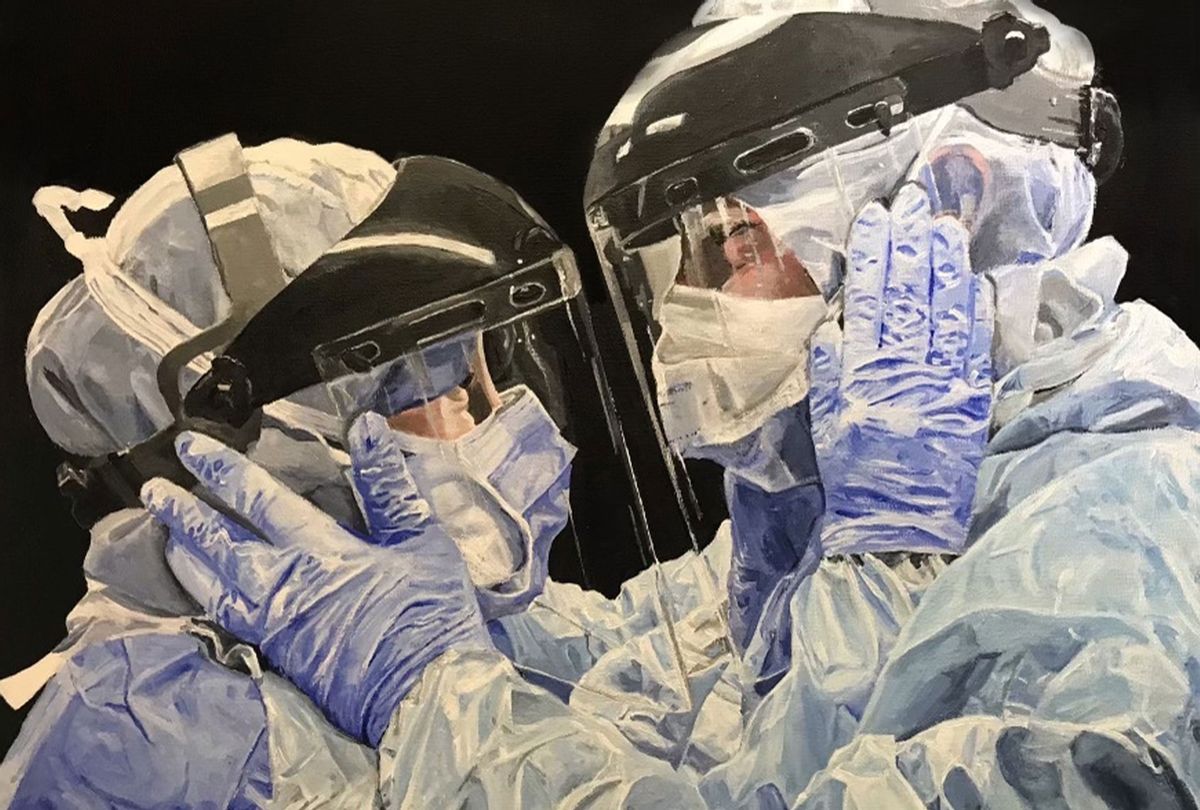 A friend and former colleague spent the last few years studying and training to become a registered nurse. Recently, she succeeded in passing the boards.

Congratulations — and what a time to begin!

What would be analogous? The first thing that comes to mind is helping the wounded and dying in a time of war — which is how the profession began, whether one considers its origins as being Florence Nightingale helping British soldiers in the Crimean conflict in 1854 or, a decade later, nurses trained to help fallen soldiers in the U.S. Civil War.

The great majority of those dying in today's modern hospitals are soldiers, wittingly or not, in a culture war headed by militant Republican leaders, like Texas Gov. Greg Abbott, Florida Gov. Ron DeSantis and lesser lights, like our attorney general in Missouri, Eric Schmitt, who is doing the red portions of the Show Me State proud — and serving his candidacy for U.S. Senate — by suing the state's large urban school districts for maintaining mask mandates in the ongoing pandemic.

RELATED: Our new "live with it" COVID strategy is devastating health care workers

It's a war out there, and you've got to accept a certain level of American carnage. But what an unnecessarily tragic level: As I write, nearly 900,000 of our fellow citizens have died as a result of coronavirus. With the previous administration's response to the pandemic, by turns political, ignorant, truculent, mendacious and hyper-politicized, by the end of summer 2020 the United States, with just over 4% of the world's population, accounted for nearly 25% of the global total deaths — a terrible mark against what was once considered a leading "First World" country. (With the Biden administration's push to get shots in arms, even as Republicans do all they can to undermine the effort — that proportion appears to have declined to around 14% of the 6.3 million dead worldwide.)

Infections may blessedly be coming down across the country, but with the omicron variant they remain far above what was seen in any previous surge. Hospitals across the country continue to be inundated, largely by unvaccinated people. Many health care professionals — physicians, nurses and other front-line workers — have long since maxed out emotionally and physically, suffering exhaustion, depression and post-traumatic stress syndrome. It is estimated that 20% have left the profession, with even a higher percentage saying they are considering leaving — on top of the fact that a serious nursing shortage existed even before the pandemic.

Some health care leaders speak of a resilience that has grown among their staff members. That may be wishful thinking, but it is all we can hope for — that the battle-weary doctors and nurses and medical technicians who remain are even more stubborn than the virus and are willing to stay on the front lines.

My friend Kerry accomplished this change in careers later in life through great effort and dedication, continuing to work as a freelance copyeditor of medical journals while also putting in massive hours of study and hands-on work with patients. I happen to work for a science, technology and medical publisher (where she and I met) and some top-flight nursing preparation books come through one of the web-based submission systems I manage. A while back I read the introduction to one of these National Council Licensure Examination (NCLEX) titles, and then started reading through some of the sample questions. I literally started perspiring — flop sweat — as if I were taking a final exam in a language I only partially recognized.

So as a thought-leader like Sarah Palin dines "outside" in a New York restaurant two days after testing positive and a health expert like Joe Rogan says he will try to do better after spewing disinformation about vaccines and "alternative therapies" on his massively popular podcast, Kerry and her classmates who managed to pass the NCLEX-RN find themselves as newly-minted nurses in hospitals still overwhelmed by the COVID-19 pandemic, omicron edition. It truly is a war out there, on multiple fronts, with death counts in this country now surpassing even the toll from the Civil War.

Speaking of which, along with some 20,000 men and women, poet Walt Whitman signed up to become a nurse at the outbreak of that conflict. He wrote of the horrors of the battlefield, of seeing amputated limbs piling up by field hospitals, of watching young men die. And he wrote of the mental and emotional toll of loss and the witnessing of death, as in this passage from "When Lilacs Last in the Dooryard Bloom'd":

I saw battle-corpses, myriads of them,
And the white skeletons of young men — I saw them,
I saw the debris and debris of all the dead soldiers of the war,
But I saw they were not as was thought,
They themselves were fully at rest — they suffer'd not,
The living remain'd and suffer'd — the mother suffer'd,
And the wife and the child, and the musing comrade suffer'd,
And the armies that remain'd suffer'd.

Given that Republican politicians and many of their pals in media have made the meliorations of the pandemic era — vaccines, masks, social distancing — into cynical culture-war issues to advance their own political interests, perhaps treatments should be modeled after what patients experienced before the era of vaccines, without the use of anything high-tech. You think that is uncivilized? Republican leaders remain adamantly opposed to universal health care, devoted to keeping the U.S. standing nearly alone in the world in pursuing its expensive and wasteful FFY (Fend for Yourself) system. We could call taking a pre-vaccine era approach to vaccine-deniers the MAGA (Make America Grim Again) treatment protocol.

Providing health care to all citizens in need is one definition of a civilized country, and the people who devote themselves to service to others would never turn anyone away. Nurses and doctors will always strive to give you care ASAP, no matter how badly you have behaved and how exhausted they are. They'll listen patiently (for the nth time) to those who come to realize that their favorite politicians and "news" organizations led them to this crisis and who speak — haltingly, out of breath — of their regrets.

Perhaps one day, historians will refer to surges in the coronavirus pandemic by those who eagerly spread the most disinformation up to the upward turn: the Trump Surge, the Carlson Surge, the Rogan Surge. (Better yet, they could highlight the ownership: the Putin Surge, the Murdoch Surge, the Spotify Surge.)

Bless you, Kerry, and all your fellow graduates willing, and now able, to step into the breach in this unconscionable political battle in the face of a health care crisis that continues to take more American lives and puts the rest of us at greater risk for infection and for facing new variants. I hope one day you can join a class-action lawsuit against the politicians and media corporations who knowingly and ceaselessly lied to the public about the critical importance in a pandemic of wearing masks and getting vaccinated.