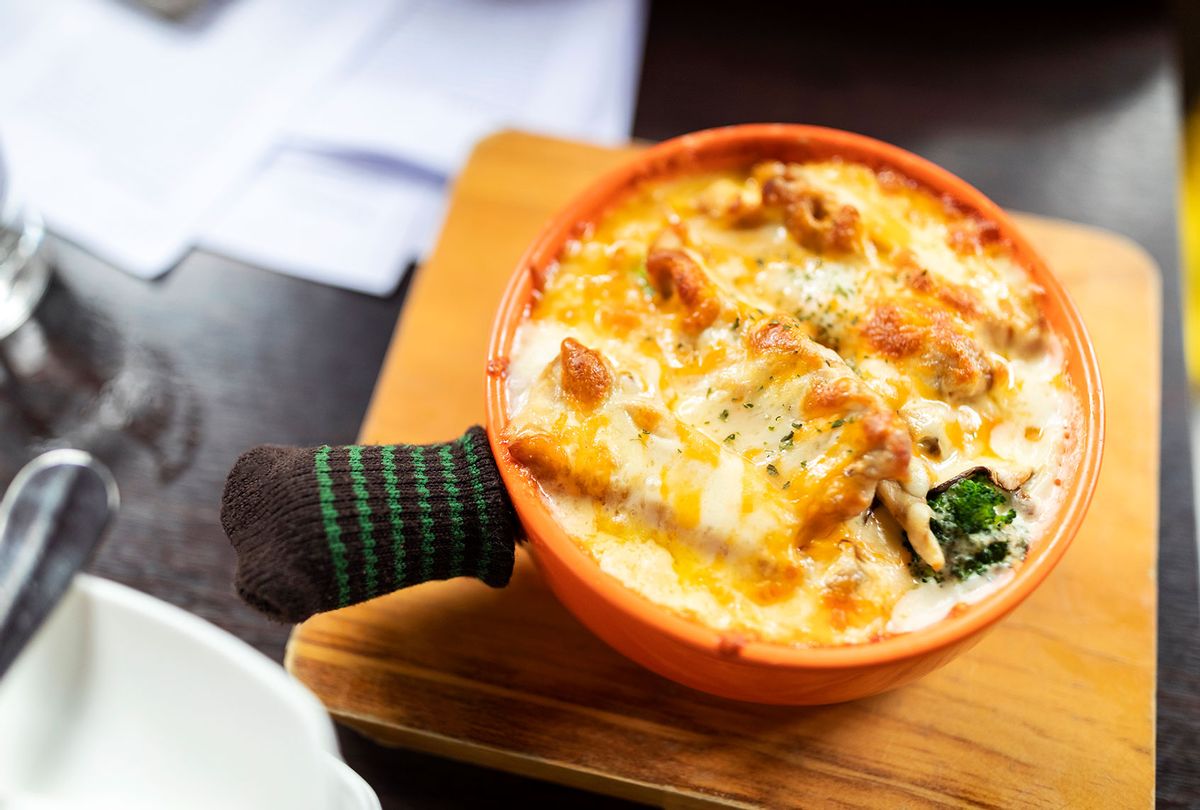 Chicken tetrazzini is iconic — a classic casserole with a subtly Italian-American spin, a confluence of egg noodles, a rich sauce, a copious amount of mushrooms, chicken, bread crumbs, and cheese. Sometimes it's dotted with some veggies, such as peas. A rich sauce enrobes all of the ingredients before the whole shebang is baked and then broiled, a bronzed crust atop a cozy bed of creamy, sauced noodles. You really can't go wrong.

As previously stated, I am a sucker for a good chicken dish, whether it's chicken parm or some of the lesser known Italian and Italian-American chicken dishes. One of my favorite things is chicken's sheer versatility, which caused me to think of a traditional chicken dish that could be reimagined or reconstructed in a different format: honoring the original dish, and then flipping it on its end. In addition — and from an efficiency and time management perspective — I also thought it'd be neat to make a "double duty" chicken dish: one dinner with repurposed leftovers the next day for lunch. Easy, breezy, beautiful!

This is where tetrazzini comes in.

Named after Italian opera star Luisa Tetrazzini, according to The New York Times, the dish originally consisted of "spaghetti, heavy cream, chicken, mushrooms ... Parmesan ... served with two classic French sauces, chicken veloute and hollandaise." Today's verison is a bit more streamlined and is usually held together with a bechamel. The dish began to become popular throughout the mid-1990s. Southern Kitchen notes that Tetrazzini's nickname was "The Florentine Nightingale," which adds a bit more to her overall mystique and appeal in the opera world and beyond at that time.

For all intents and purposes, it's a casserole, the epitome of "home cooking." It's a masterclass in comfort food, a reliable standby that is pretty consistent — and always delicious. There are myriad variations in today's day and age, swapping in and out various ingredients, using different cooking vessels instead of the ol' bake-and-broil, gussying up the flavor profiles or differentiating it from being Italian-adjacent to something different entirely

It should also be noted that in many of the original iterations of the dish, chefs opted for turkey over chicken. While it is widely understood that Luisa Tetrazzini is the namesake of the dish, its particular geographic place of origin is hotly contested. Many pieces note San Francisco as the birthplace, such as this one in the The Ann Arbor News, while other articles state that the dish may have actually started in New York City. The book San Francisco: A Food Biography does a deep-dive into the history of the dish, noting that the Palace Hotel in San Francisco, helmed by Chef Ernest Arbogast in 1905, is the person who was so inspired by Luisa Tetrazzini that he created the dish and named it after her. The book even goes so far to specify a particular date, apparently the night that Tetrazzini performed in the city: March 6, 1905.

Interestingly enough, though, a 1908 issue of Good Housekeeping notes that a "restaurant on forty-second street [in New York]... serve[s] a good and easy entree or main course." One can assume that the dish may have traveled from San Francisco to New York in the matter of only three years.

The magazine continues "it is named after the famous singer. Small, thin slices of cooked turkey in a cream sauce to which some cooked spaghetti was added and a little grated cheese, also some very thin slices of mushrooms cut crossways. This was served in the dish in which it was cooked and some bread crumbs were browned over the top." The book extrapolates that this restaurant may have been the Knickerbocker Hotel.

The emergence of "comfort food" (by way of the casserole)

Southern Kitchen notes that the Chicago Tribune shared one of the first recipes for tetrazzini in 1911. Southern Kitchen also muses on the iconic casserole and its lasting appeal, including a quote from a 1970 cookbook that states that "the covered-dish supper is becoming one of the most convenient ways for people to get together and have dinner. It works for large church dinners, for gourmet clubs when the menu is planned way ahead, for neighborhood gatherings, and for buffet suppers in honor of special guests."

Of course, the dish is also just as welcome on a blustery Wednesday night.

It should be noted that while the dish is named after an Italian opera singer, there is no evidence that it is truly an Italian-American dish — aside from the Parmesan.

While a tetrazzini is usually made with egg noodles, chicken, mushrooms, and bechamel, don't feel that you need to be tied to that. Only have spaghetti at home? Not eating poultry? Have an inexplicable aversion to bechamel for no reason whatsoever? (It is truly my brother's kryptonite). Don't fret — this is a prime dish for mixing and matching. I'd argue that as long as you have noodle + protein + veg. 1 + veg. 2 + sauce + bread crumbs and cheese, you're pretty much good to go.

Regardless, the dish is a classic for a reason: it is absolutely delicious. Play some opera while cooking and eating this dish and envision enjoying the iconic meal in an opulent theater, being serenaded by Luisa Tetrazzini herself while you savor the dish.

Some quick notes before we get to the nitty gritty:

Some of our favorite Italian-American recipes: