The "Grand Alliance" of Jews and African Americans was more pragmatic than idealistic. Still: It shaped history 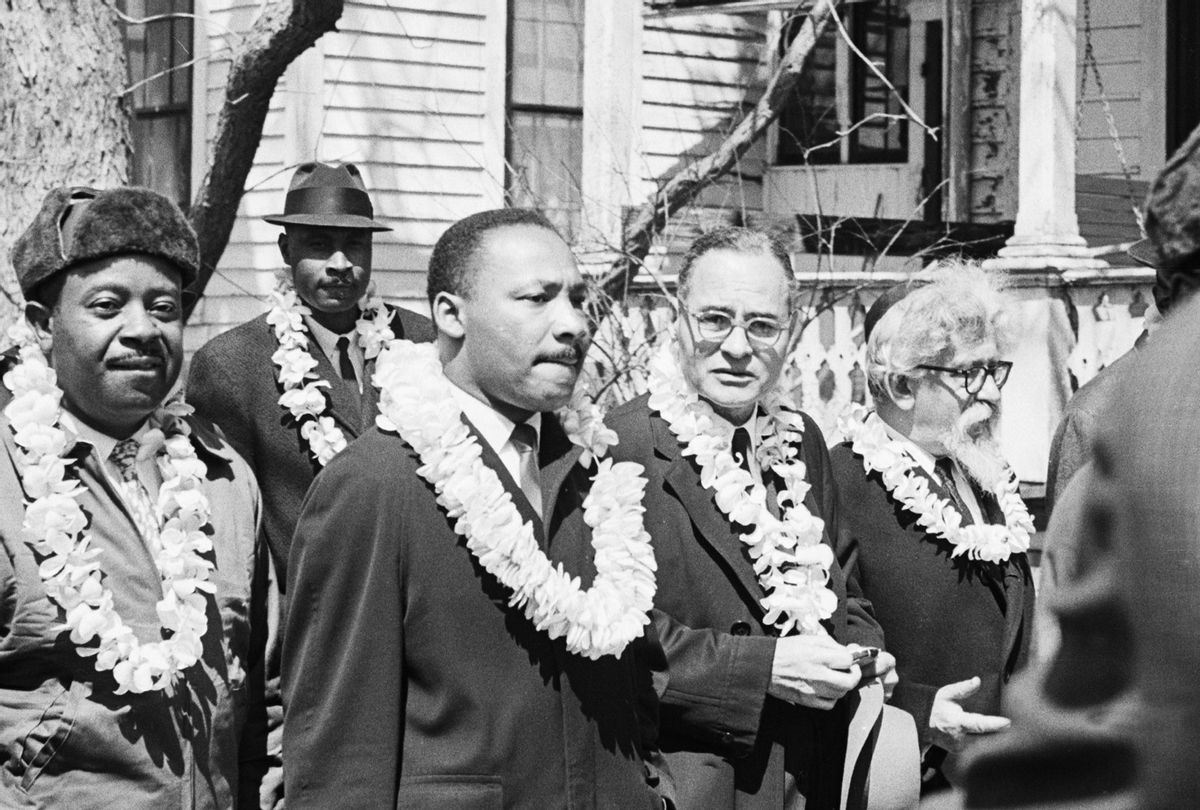 Civil rights leaders Ralph Abernathy, Martin Luther King Jr., former UN Ambassador Ralph Bunche, and Rabbi Abraham Joshua Heschel (l-r) wear leis during the start of a march from Selma to Montgomery, Alabama. The leis were given to the marchers from a group from Hawaii. (Getty Images/Bettmann)
--

In our research and teaching on African-American and Jewish-American relations, we often find ourselves puncturing misconceptions about their legendary civil rights-era partnership. Our efforts to "keep it real" aren't meant to diminish the accomplishments of their "Grand Alliance." Rather, our unsentimental assessment of relations between gentile Blacks and white Jews provides some context to think through today's challenges, like the battle to re-secure voting rights.

Let's start with the accomplishments. At mid-century, Southern states sought to expand Jim Crow, while Northern cities engaged in their own forms of discrimination. Black and Jewish strategists responded by orchestrating a nationwide plan of action. The ensuing  "Fight for Freedom Campaign" of 1953 essentially framed the NAACP's legal strategy for the civil rights movement. The passage of the Voting Rights Act of 1965 was another triumph, eliminating (albeit temporarily) barriers to voting for African Americans.

In that same year, the Alliance generated its most iconic image. There isn't a liberal Jewish institution in the United States that hasn't posterized America's greatest visual testament to interfaith, multicultural activism: Dr. Martin Luther King Jr. and Rabbi Abraham Joshua Heschel with their arms linked in Selma, Alabama, leis draped around their necks. (That image appears above.)

Yet the accomplishments and the optics obscured more complex realities. One popular belief about the Alliance is that from its inception in 1909 (i.e., when the NAACP was founded) it was based on a sense of "fellow feeling" rooted in mutual recognition of common oppression. Certainly there were history buffs in both groups who recognized that their counterparts had endured (and continued to endure) the very worst that Western white Christendom had to offer. Yet in accordance with James Baldwin's dictum that suffering ennobles nobody, we must recognize that pragmatism, more than empathy, powered their relationship.

First and second-generation Jewish Americans, escaping Eastern Europe's iron furnace, looked at the Black experience as a frightening proof of concept. The concept being that this nation too could display unimaginable cruelty towards a minority. To Jews, Black misery was like a crumple zone. It absorbed the impact of white Christian violence while warning of imminent danger. When Jewish leaders advocated for Black civil rights, considerations of self-interest were not inconsequential.

Likewise, for underfunded but intellectually and tactically spry African American organizations. Jews provided them with financial resources. They also served as a corridor to an arsenal of sophisticated legal and political weaponry — all of it useful in the struggle to combat disenfranchisement, segregation and anti-blackness in general.

This crumple-zone/corridor partnership was maintained by elites — a "talented tenth" of clergy, lawyers, journalists, scholars, artists and the like, almost all of whom were men. This left roughly nine deciles worth of Blacks and Jews, male and female, to forge their own relationships. These encounters among the rank and file were tense and filled with allegations of racism and antisemitism (as well as actual racism and antisemitism).

We blame it on structural asymmetries. When the Great Migration propelled Blacks northward in the early 20th century, they met Ashkenazi Jews in New York, Boston, Baltimore, Philadelphia, Chicago and elsewhere. In these urban enclaves, the Jewish-Black relation was often one of landlord to tenant, grocer to customer, housewife to maid, etc. Such patterned inequality is never likely to foster solidarity.

That being said, Jews were unusual among white ethnic groups. Whereas the latter violently resisted Black migration to their communities, Jews did not. Even Jews who eventually "white-flighted" from their integrated neighborhoods often remained behind as business owners, teachers, etc. What is striking about Black-Jewish encounters is that there were so many of them on so many different social levels. The result was an infinity of interactions, some of which conduced to empathy.

Behind the scenes, the elites tried to quell those tensions on the ground, even as they bickered among themselves. There were fissures within the groups as well, most notably between a younger generation of radicals and the old guard civil rights leadership.This burst into view after the 1967 Six-Day War. At that momentous historical juncture many in the Black Power movement began to equate Israel with white-settler colonialism. This likely tore the Grand Alliance asunder.

The next half-century, or what we call the "afterglow" era, witnessed a dismal litany of Black/Jewish scrums. These ranged from the 1968 Ocean-Hill Brownsville teachers' strike to disputes about affirmative action to the "Andrew Young Affair" of 1979 to the antisemitic provocations of a few Black leaders to dismay about Israel's diplomatic relations with South Africa's apartheid regime to the Crown Heights riots of 1991.

And yet: The Black-Jewish Alliance did a world of good. In terms of impact, it is the liberal equivalent to the union of conservative white evangelicals and Roman Catholics; America is a different country because of their activism.

Today, as the John R. Lewis Voting Rights Advancement Act hangs in the balance, the Alliance has a few lessons to impart. The first is that diverse coalitions work. Today's activists must convince many different groups that failure to pass the act will do more than just disenfranchise Black voters.

The second is that diverse coalitions work when they season pragmatism with empathy. The late Rep. John Lewis, a bridge to the Alliance, fully understood that recipe when he wrote: "The gay community, women — my connection with them and their issues sprang from that same affinity I felt with Jewish people, the understanding of what it means to be treated unequally."

The biggest takeaway is that diverse coalitions work when they are well led. The Alliance had talented, focused, astute and no-nonsense stewards. Today, the ultimate "no-drama" senators, Raphael Warnock and Jon Ossoff of Georgia, work alongside Black and Jewish women to protect voting rights (a corrective to the Alliance's gender imbalances).

This Black-Jewish duo notwithstanding, no real effort exists to "bring the band back together." Perhaps that's fine. Blacks and Jews performed their heroisms. Those have been chronicled by scholars such as ourselves. Let other combinations of Americans study, innovate upon and refine their messy formula of wedding group-interest to social justice.

Read more on the struggle to save and expand voting rights:

Terrence L. Johnson (@tljohn44) is a professor of religion and politics at Georgetown University and co-author, with Jacques Berlinerblau, of "Blacks and Jews in the United States: An Invitation to Dialogue."