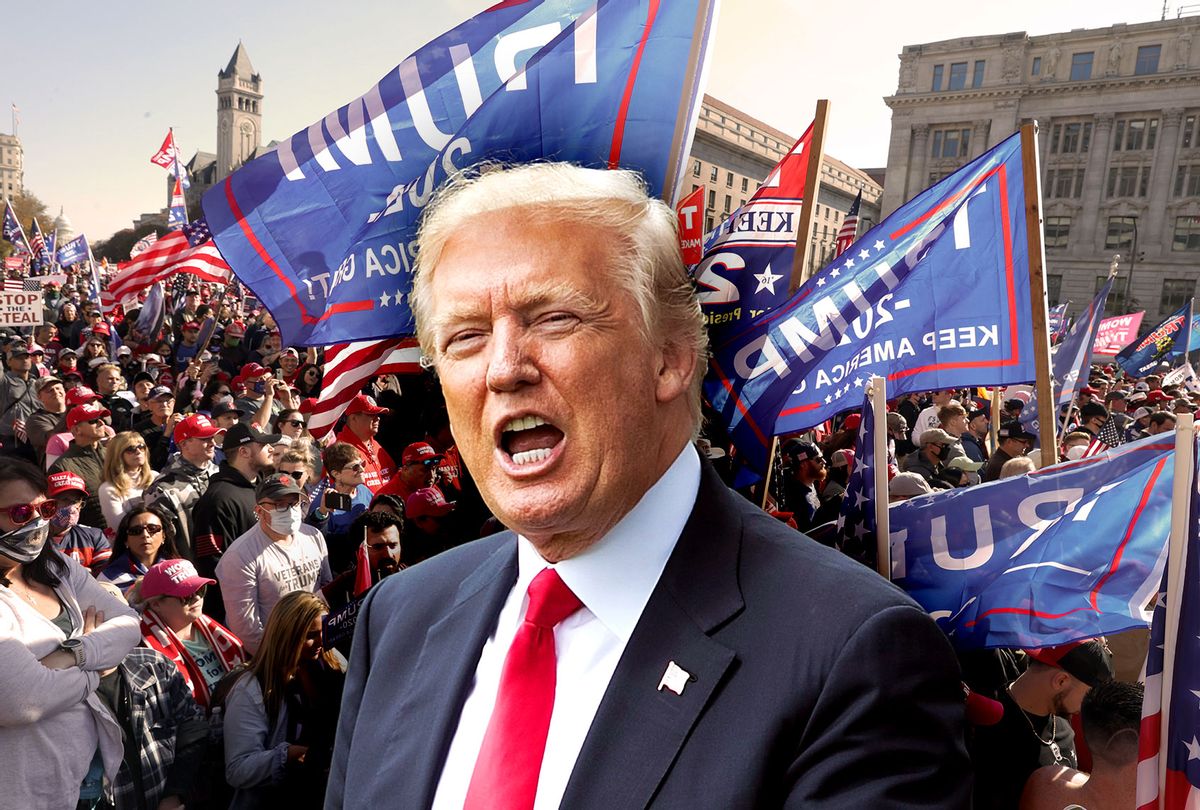 Donald Trump | People participate in the “Million MAGA March” from Freedom Plaza to the Supreme Court, on November 14, 2020 in Washington, DC. (Photo illustration by Salon/Getty Images)
--

Donald Trump is a highly skilled white-supremacist propagandist. There's nothing natural about that skill. It has been taught, learned and internalized over many years. In all likelihood, it came from his family upbringing. Fred Trump, Donald's father, was arrested at a Ku Klux Klan riot. In the 1970s, the Trump family's real estate company was sued for housing discrimination against Black and brown people.

In 1989, Trump took out full-page ads in major New York newspapers calling for the execution of five Black and Latino young men who were accused of brutally beating and raping a white woman in Central Park. Those men were convicted based on coerced confessions and spent years in prison before being exonerated and released. Trump has refused to apologize or even admit he was wrong.

Years later, Trump would use the racist conspiracy theory known as "birtherism" to attack Barack Obama, and as his own springboard to national political power. In 2016, he rode a wave of white anxiety and racist backlash to the White House, in a meaningful sense becoming America's "first white president."

For four years, the Trump regime, the Republican fascists and the larger white right obsessively attacked America's multiracial democracy and the progress the country has made along the color line, from the victories of the civil rights movement in the 1960s to the present.

Donald Trump was defeated in the 2020 presidential election. Once again, he pushed American politics into frightening unexplored territory, driving his followers to launch a lethal attack on the Capitol as part of a coup attempt aimed at nullifying the election results.

Trump and the Jim Crow Republicans have not been deterred by the events of Jan. 6, 2021, and their failed coup attempt. Quite the opposite: They took that experience as a trial run, and have only gained momentum in their attacks on multiracial democracy with the goal of creating a new American apartheid state. Across the country the Republicans are passing or proposing laws aimed at preventing Black and brown people and other supporters of the Democratic Party from voting. In many ways, America's multiracial democracy is already dying, and most Americans do not even realize it. There are tens of millions of white Americans who will celebrate its demise.

Joe Biden and the Democrats have done little or nothing to address this crisis. Despite what many of the hope-peddlers and professional centrists in America's political class and commentariat suggest, Donald Trump remains in firm and full control of the Republican Party and the larger anti-democracy movement. His evident plan is to use overt white supremacy and racism to win back the White House in 2024. The Democrats, to this point, have shown themselves incapable of beating back such an assault.

At his last two rallies, Trump provided a preview of that strategy, hinting that he is willing to provoke a "race war" in order to regain power and to get revenge on his real or imagined enemies. At a rally in Arizona last month, Trump told his followers this:

The left is now rationing lifesaving therapeutics based on race, discriminating against and denigrating — just, denigrating — white people to determine who lives and who dies. If you're white you don't get the vaccine, or if you're white you don't get therapeutics. It's unbelievable to think this. And nobody wants this. Black people don't want it, white people don't want it, nobody wants it. ... In New York state, if you're white, you have to go to the back of the line to get medical health — think of it, if you're white you go right to the back of the line. ... This race-based medicine is not only anti-American, it's government tyranny in the truest sense of the word.

In Conroe, Texas, roughly a week ago, Trump continued with these racist threats, bordering on incitements to violence:

At that Texas rally, Trump suggested he might pardon those who engage in political violence on his behalf, saying he would "treat those people from Jan. 6 fairly. … And if it requires pardons, we will give them pardons."

America's mainstream news media has largely ignored the constantly rising temperature of Trump's racial rhetoric, in keeping with its overall tendency toward normalizing Trumpism and neofascism. As an institution, mainstream media has a long history of refusing to address the realities of white supremacy and racism in American society in general, and white supremacist and right-wing violence and terrorism more specifically.

As it happens, Conroe, Texas, where Trump spoke recently, has a long and ugly history of white-on-Black lynchings and other white supremacist violence — the same type of violence that Trump's rhetoric is channeling and threatening to unleash across the United States.

Investigative journalist Nick Davies wrote about Conroe's history in 1989, describing it as "The Town That Loved Lynching":

The old sheriff of Montgomery County, Ben Hicks, had an answer for everything.

A black man had just been burned alive in front of his office in the courthouse square in the middle of Conroe while a crowd of hundreds of white men, women and children looked on. The sheriff himself had led the hunt which ended with the capture and brutal death of this man. The sheriff's own deputies had stood on the outskirts of town and turned black people away, telling them "You can't come through. They're going to burn a nigger."

But after the burning was over and the black man's ashes had been kicked away, and reporters from Houston came to Conroe and asked what had happened, the old sheriff of Montgomery County shrugged and told them he knew nothing. "I turned my back for a moment," he said, "and when I looked back, the negro was tied to a burning stake."

The burning of Joe Winters in May 1922 is only one of a series of occasions on which a sheriff of Montgomery County, together with the rest of the county's leaders, have "turned their backs for a moment."

In the wake of the Clarence Brandley case, in which judges and other officials in the county have been accused of conspiring to send an innocent black man to his death, research into the county's past has disclosed ten separate incidents — spanning nearly a century from December 1885 to December 1973 — when young black men have been accused of crimes, often with white women as victims, and have then been murdered with the apparent consent of judges and officials in Montgomery County.

The earlier incidents, despite the spread of time, are linked by common threads: all the victims were black; all the attackers were white; and in each case county officials who were supposed to ensure that justice was done, consented to the murders. In some of the incidents, the officials not only consented but actively participated.

Those gruesome incidents in Conroe were part of a much larger pattern of white supremacist terror in Texas, where at least 330 Black people were lynched between Reconstruction and the end of World War II. If Latino victims are included, the number of racially motivated lynchings is much higher.

These are not nightmarish abstractions from distant history. This is a real history of real suffering that endures into the present in the memory and consciousness of Black America. Reparations have never been made to Black Americans for these (and other) crimes against humanity, and it's unlikely they ever will be.

Contrary to what many people would like to believe, Donald Trump is not going away and his followers are not abandoning him. The danger he represents is escalating: Trump has repeatedly demonstrate that he has a pathological attraction to violence, even if he is too cowardly to order it directly.

Trump's supporters and other white people should not delude themselves: Racism and white supremacy do not only hurt Black and brown people. Such hatred damages white people too, on a myriad of levels both material and psychological. Trump's race war threats hint at a conflagration that will leave no one untouched. He is literally willing to burn down American democracy, and indeed our entire society, if he does not get his way. Unfortunately, too many Americans, especially among the media and other elite groups, continue to convince themselves this is all posturing and idle threats.

Read more on the painful costs of white supremacy: