What came from Biden and Putin's hour long discussion

After a lengthy discussion, Biden warned Putin of "swift and severe consequences" 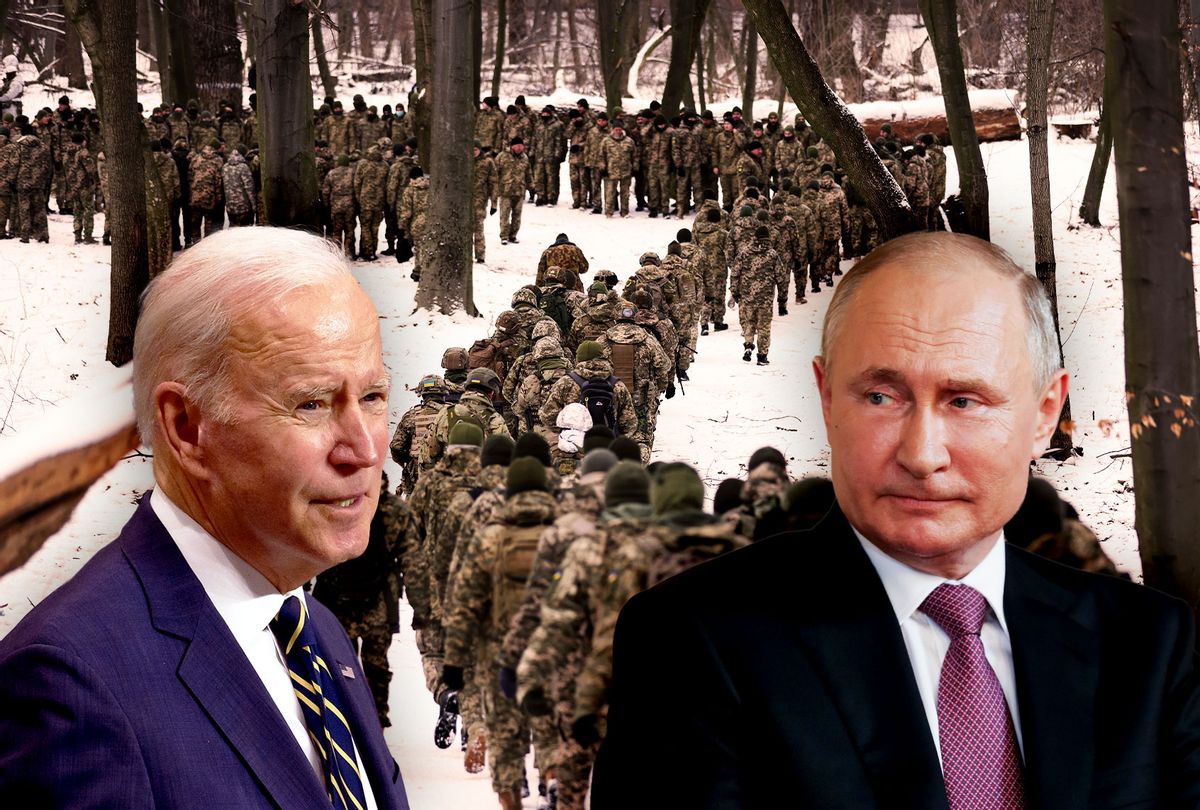 Joe Biden and Vladimir Putin | Civilian participants in a Kyiv Territorial Defence unit train on a Saturday in a forest on January 22, 2022 in Kyiv, Ukraine. Across Ukraine thousands of civilians are participating in such groups to receive basic combat training and in time of war would be under direct command of the Ukrainian military. While Ukrainian officials have acknowledged the country has little chance to fend off a full Russian invasion, Russian occupation troops would likely face a deep-rooted, decentralised and prolonged insurgency. Russia has amassed tens of thousands of troops on its border to Ukraine. (Photo illustration by Salon/Getty Images)
--

Hours after the US moved some of its forces out of the Ukraine, President Biden met with Russian President Vladimir Putin for a lengthy discussion where Biden warned of "swift and severe consequences" in response to the continued threat of a push against Ukraine.

In a statement from the White House following the meeting representatives relay "President Biden was clear that, if Russia undertakes a further invasion of Ukraine, the United States together with our Allies and partners will respond decisively and impose swift and severe costs on Russia. President Biden reiterated that a further Russian invasion of Ukraine would produce widespread human suffering and diminish Russia's standing."

The pressing fear of a Russian invasion of Ukraine within the next few days has been flooding the news cycles and social media channels such as TikTok. In a recent Washington Post article they detail "hundreds of videos showing sophisticated Russian weaponry and military vehicles speeding by on railways, highways and local roads toward positions near Ukraine." Despite evidence such as this, Putin and top Russian officials have been denying for months that Moscow has plans for an invasion against Ukraine.

In a CNN report Saturday afternoon they detail that "Russian Ministry of Foreign Affairs accused Western countries and the press of spreading a "large-scale disinformation campaign" about an allegedly impending Russian invasion of Ukraine "in order to divert attention from their own aggressive actions."

In a statement published to its website the Russian Ministry of Foreign Affairs state that "at the end of 2021 and the beginning of 2022, the global information space faced a media campaign unprecedented in its scale and sophistication, the purpose of which is to convince the world community that the Russian Federation is preparing an invasion of the territory of Ukraine."

As of Saturday, Russia has confirmed reports that they're pulling members of their own diplomatic staff from Ukraine citing "possible provocations by the Kyiv regime and third countries."

"We conclude that our American and British colleagues apparently know about some military actions being prepared in Ukraine," Russian Foreign Ministry spokeswoman Maria Zakharova said in a statement responding to their decision to follow suit.