U.S. troops on standby as tensions with Russia worsen over possible Ukraine war

Pentagon says 8,500 troops are on "heightened preparedness" even as Antony Blinken vows "diplomacy and dialogue" 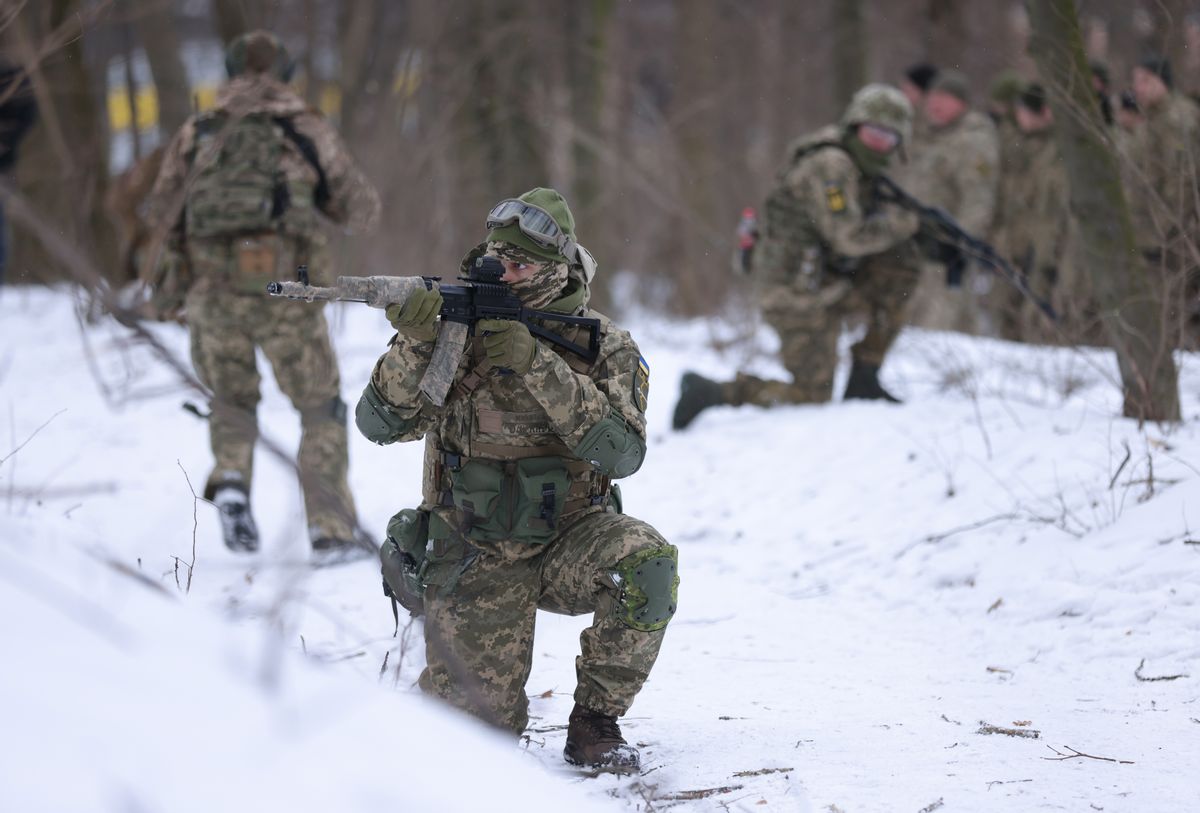 Civilian participants in a Kyiv Territorial Defence unit train in a forest on Jan. 22, 2022, in Kyiv, Ukraine. (Sean Gallup/Getty Images)
--

Despite warnings that U.S. actions not focused on diplomacy with Russia risk setting the stage for an "exceedingly dangerous quagmire," the Pentagon announced Monday that roughly 8,500 U.S. troops have been put on "heightened preparedness to deploy" to Eastern Europe amid rising tensions with Russia over Ukraine.

Speaking at a news briefing, Pentagon press secretary John Kirby said the "steps to heighten the readiness of ... forces at home and abroad" were aligned with U.S. commitments to NATO.

President Biden wouldn't deploy the troops unless activated by NATO's Response Force (NRF) "or if other situations should develop," said Kirby.

The U.S. would also be ready to deploy additional combat teams and other support including logistics and surveillance, he said, though no deployment has yet been made.

According to Kirby, "It's very clear the Russians have no intention right now of de-escalating."

In the U.K., meanwhile, Prime Minister Boris Johnson warned of the possibility of a "lightning war" touching off.

"The intelligence is very clear that there are 60 Russian battle groups on the border of Ukraine," Johnson said Monday. "The plan for a lightning war that could take out Kyiv is one that everybody can see. We need to make it very clear to the Kremlin that that would be a disastrous step."

On Monday, the Associated Press reported:

Russia has massed an estimated 100,000 troops near Ukraine's border, demanding that NATO promise it will never allow Ukraine to join and that other actions, such as stationing alliance troops in former Soviet bloc countries, be curtailed. Some of these, like any pledge to permanently bar Ukraine, are nonstarters for NATO — creating a seemingly intractable deadlock that many fear can only end in war.

Russia denies it is planning an invasion, and says the Western accusations are merely a cover for NATO's own planned provocations. Recent days have seen high-stakes diplomacy that failed to reach any breakthrough and maneuvering on both sides.

That effort included a face-to-face meeting Friday in Geneva between Secretary of State Antony Blinken and Russian Foreign Minister Sergey Lavrov. While Blinken said that "we are ... equally committed to the path of diplomacy and dialogue to try to resolve our differences," he added that "we're also committed, if that proves impossible and Russia decides to pursue aggression against Ukraine, to a united, swift and severe response."

The U.S. and U.K. have also drawn down their staff at the embassies in Ukraine over the past two days, and the U.S. last week approved transfers of U.S. weapons from Estonia, Latvia and Lithuania to Ukraine.

According to Joseph Gerson, president of the Campaign for Peace, Disarmament, and Common Security, the situation is "a totally unnecessary" crisis but one that "has been years in the making."

In an op-ed published at Common Dreams Monday, Gerson wrote:

Rather than acknowledge and compensate for errors made along the way, U.S. and NATO leaders' arrogant inability to acknowledge legitimate Russian security concerns have precipitated what is termed the Ukraine crisis. It is actually a trans-European crisis. Contrary to all sides' harsh public rhetoric, a near-term Russian invasion of Ukraine appears to be unlikely. But it could be triggered by an unintended incident, accident or miscalculation.

A chorus of voices warning against war continues to urge restraint from the U.S.

"Coming so soon after their 20-year war in Afghanistan," said David Gibbs, a professor of history at the University of Arizona, "U.S. officials should not be looking for new foreign interventions in the Ukraine — which risks even worse outcomes than the 'War on Terror' produced."

Warnings also came from Lyle Goldstein, director of Asia Engagement at Defense Priorities, who argued that even indirect intervention by the U.S. could bring "deleterious and even catastrophic consequences."

"An indirect U.S. military role, such as offering weapons and military trainers, may sound appealing," Goldstein told Responsible Statecraft. "Yet, such activities would further cement the 'New Cold War,' might prolong the war and the killing, would strain the NATO alliance, and could encourage Russian horizontal escalation, whether in Syria or even Venezuela."

Read more on the new Cold War — and the threat of a "hot" one: