No one's saying whether the two presidents' "frank" conversation got anywhere — meanwhile, Trump wants your money 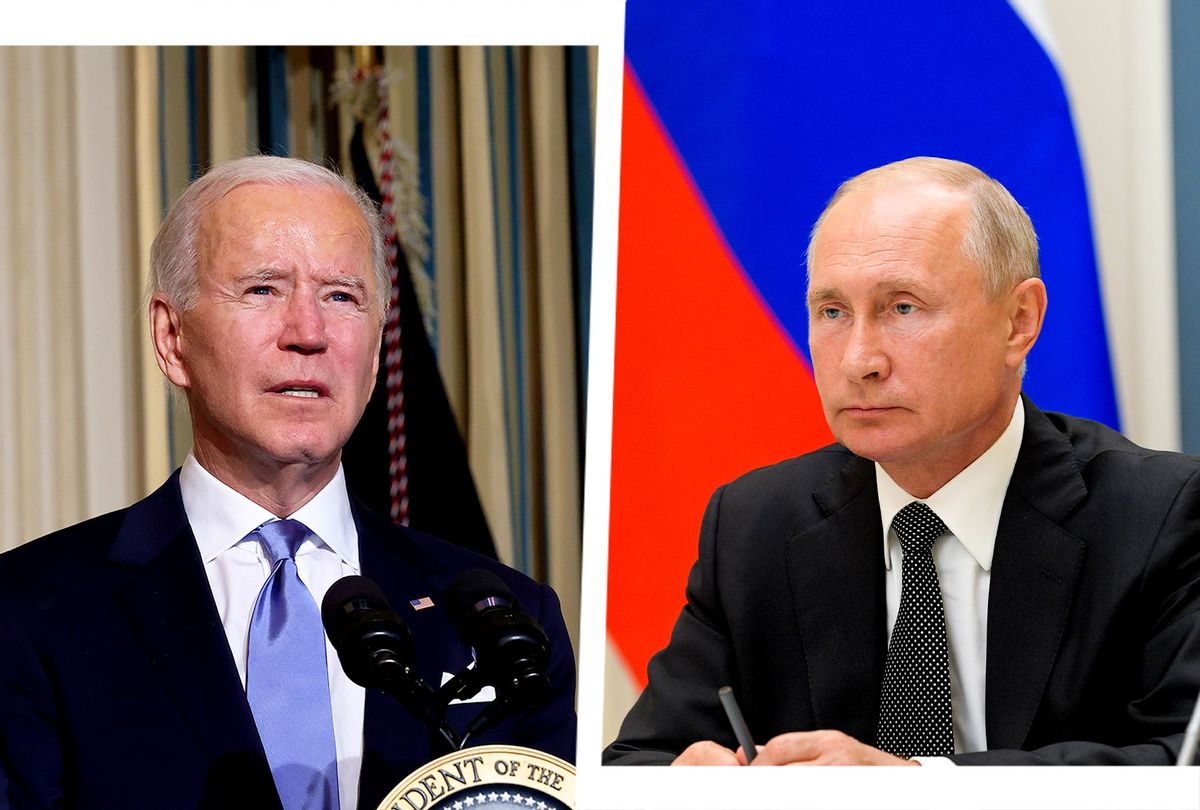 Tuesday morning broke cold and crisp at the White House. By mid-morning dozens of reporters were stirring in their warm winter coats — lined up doing live shots on the north side of the campus.

Inside the building, with stockings hung by the fire with care, President Joe Biden began a two-hour telephone call with Vladimir Putin. The call came after the Russian president recently increased worldwide tension by massing troops inside Ukraine with the implicit threat of overrunning a country ruled by a former comedian. I cannot verify whether Putin growled, with his fingers nervously drumming.

While Biden was nestled all snug in his office discussing these grave matters of international importance with a former KGB officer and current autocratic ruler of Russia, our former president, Donald Trump, slithered and slunk and — with a smile so unpleasant! — sent out emails to his loyal followers offering them Trump wine glasses as Christmas gifts for a very affordable price.

Some foreign reporters did appear, discussing "first strike" capabilities, as if whatever happened in the phone conversation between the two presidents could lead to a nuclear war sometime before lunch. Maybe the most likely reason they thought of this at all is that their hearts are just two sizes too small.

Others weren't so sure, and a few other reporters, shuffling back and forth in the West Wing or running to their various live-shot locations, expressed more concern about the omicron variant of the COVID-19 virus. Some took time to lament the fact that a few reporters had recently tested positive for the virus — including one who apparently sat in on a recent press briefing .

Most of the conversation and consequent speculation among reporters about the Biden-Putin call relied heavily on a background telephone conversation that took place between a White House official and the press corps the previous day. "President Biden will obviously raise our concerns with Russia's military buildup and plans with respect to Ukraine. The agenda will also cover a number of other critical issues including strategic stability, cyber and Iran's nuclear program," we were told.

Nothing was said about outer space issues.

The background call lasted about 20 minutes and left most questions unanswered, although to be fair because of arbitrarily imposed time constraints few questions were asked.

That set the table for Tuesday, with more speculation leading up to the Putin call and even more cud-chewing afterward.

After Biden finished the Putin call, he then called and debriefed our closest allies. He also released a one-paragraph statement:

President Biden voiced the deep concerns of the United States and our European Allies about Russia's escalation of forces surrounding Ukraine and made clear that the U.S. and our Allies would respond with strong economic and other measures in the event of military escalation. President Biden reiterated his support for Ukraine's sovereignty and territorial integrity and called for de-escalation and a return to diplomacy. The two presidents tasked their teams to follow up, and the U.S. will do so in close coordination with allies and partners. The presidents also discussed the U.S.-Russia dialogue on Strategic Stability, a separate dialogue on ransomware, as well as joint work on regional issues such as Iran.

Oh, and by the way, the kid with the fake hair and the Rodney Dangerfield suits also took the opportunity a few minutes later to ask me to join his "Official Trump Honor Roll" by donating at least $25. It was an opportunity to join "an exclusive roster" and such an opportunity "does not come around often Brian."

Meanwhile, back in the world that mattered, it was reported that Biden told Putin he was prepared to take economic sanctions farther than in 2014, when Biden was Barack Obama's vice president.

Most of the details of this conversation were subsequently withheld by both sides, as one would expect. Everyone wants to control their message.

Putin's minions described the presidents' video conference as "candid and businesslike," and the pair of presidents apparently even exchanged a few jokes. Whether or not they were about Trump — well, who knows?

Russian state television showed a brief video clip of a friendly introduction, while at the White House, national security adviser Jake Sullivan appeared in front of the press corps with press secretary Jen Psaki later in the afternoon and told us it was a "useful meeting."

But it's all on Putin, according to the White House. And some who report on Putin say it all hinges on whether or not the two men mutually respect each other.

So the foreign reporters have figured it all out. Human culture is intellectually equivalent to a pair of roosters ready to go at it in a cockfighting ring. Personally, having seen a real cockfight or two, watching either grows pointless with repeated viewing. The question is: How easily does politics bore you? Because it's dangerous to ignore it.

As it turns out, the endless negativity in politics for some reason overwhelmingly leads to voter disenfranchisement by choice. That's good for the bad politician, but bad for the good citizen.

The cacophony is avoided by most people who are struggling to "pay the bills, man." With millions of homeless in this country, a national reporter asked Psaki on Tuesday why the administration didn't just solve the problem of getting people tested by sending tests to everyone's home. Maybe his heart was two sizes too small. Or maybe I just "Hate all the Noise!" But Psaki, who long ago put it into cruise control when dealing with most of the press, ignored the noise and eased right on by this one. Never venturing out of her lane, she stressed what the White House had done and how getting people to come forward voluntarily was important — and then she stepped on the gas and wiped that tear away. (Apologies to Lennon and McCartney).

I don't think Psaki even blinked. It's one of the reasons she is respected by a press corps who, for the previous four years, were screamed at daily by an administration of spoiled children who often soiled themselves. She's always cool and cordial even when reacting emotionally, which has been rare. Or maybe people have just stopped watching. Some say that's because you can't expect a lot of groundbreaking information from a Psaki briefing. In fact you can't expect much information at all — outside of what is dictated to you. But it will be done in professional and friendly fashion, definitely not rudely.

More to the point, Psaki didn't slap a reporter for asking an oblivious question about universal COVID testing.

Meanwhile, we all continue to deal with the pandemic, raising our kids, paying the bills and struggling to make ends meet in a country that has torn itself apart with political strife, economic disruption and voter disenfranchisement. It is plagued by continuous mass shootings, willful political ignorance, arrogance, transportation problems, a huge national ego problem and supply chain snafus. Education is mostly crude and rudimentary; public schools are based on antiquated models from the last century.  The climate is changing. People are angry and frightened. Leadership: Honestly? Most rational adults have long ago abandoned any hope of leadership from most politicians of either party. Much like they've given up hope for unbiased journalism.

At the end of the day they just want to know, as the holiday season rolls around, what to give to their loved ones for presents, and whether there's a reasonable chance the world won't blow itself up before the end of the New Year. You know: the basics.

As it turns out, the White House isn't saying much about it. How effective was the telephone call between the two leaders? Were tensions lessened? Is the world any safer?

That's something Sullivan couldn't say definitively. "So, all I will say is that the ultimate metric for whether the world is safer or not is facts on the ground and actions taken, in this case, by Russia. Let's see. We are prepared to deal with any contingency, as I said at the outset. And I'm not going to make predictions or characterizations. I'm only going to say that President Biden will continue to do all of the necessary prudent planning for a variety of different pathways that could unfold in the weeks ahead."

That's a fine Merry Christmas for everyone.

But wait. There's more.. After it was all said and done Trump sent out an email saying that in 2022 he was going to "SAVE AMERICA" from the radical left. It had something to do with receiving an "Official 2022 Trump Calendar Today," for just a contribution of $25 or more.

As Biden left the Oval Office on Wednesday, he stopped by the press pool and cleaned up one bit of business. Whatever else might happen, the president explained, he wasn't proposing the possibility of sending U.S. troops to Ukraine.

Somebody please pass the eggnog.

…A wink of his eye and a twist of his head,
Soon gave me to know I had nothing to dread.

Oh, and spike it.

More from Brian Karem on the contradictions of the Biden White House: