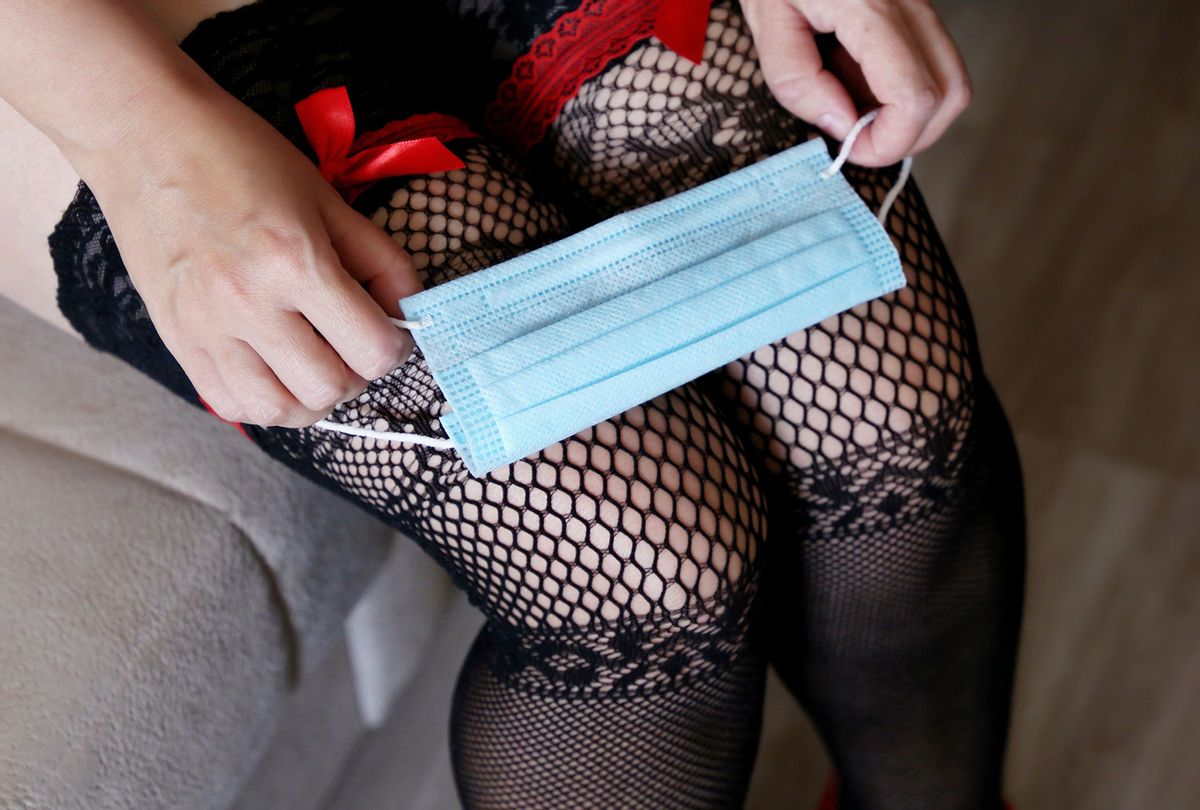 Rest in peace, vanilla sex. It was a casualty of the COVID-19 pandemic, at least in the hearts and minds of many Americans.

Mind you, sex itself seems to be alive and well. Indeed, according to an early release of data from a survey conducted by psychologist Justin Lehmiller of the University of Indiana's Kinsey Institute and presented in late 2021 at the National Sexual Health Conference, the average American wants oodles of sex, and now they want the kind that pushes them out of their comfort zones.

In a Zoom call, Dr. Lehmiller speculated about why Americans seem eager to up the ante on sexual encounters. "With pandemic boredom and stress, people may need more intense stimulation to amp up desire. Also, all the deaths have made it clear to everyone that time is limited. Given that, some people may be ready to have the sort of sex they've feared."

RELATED: How the pandemic ruined sex

Talking to the producers, I wanted to know what kinds of people promiscuously seek out carnal connection in a time of risk. I had truly mundane questions, too. For example, how does a sex party even begin to comply with mask mandates?

The three producers told me that minimizing risk at their events is a universal principle. Each producer emphasized to me that they repeatedly remind guests of the importance of clearly communicating to prospective partners their consent (or lack thereof) to specific sexual activities. From my conversations, I also learned that, almost by definition, Covid safety measures at a sex party are imperfect. Indeed, one producer I interviewed explained that his party accidentally became a superspreader event.

Shay (an alias) describes Playscapes NYC as a space for risk-aware, consensual revelry.

Shay's early business-building technique was to go to regular ol' Brooklyn get-togethers and ever so casually ask new acquaintances, "Hey, want to come to a sex party?" Then Shay would whip out hot-off-the-press business cards.

Shay (preferred pronouns are "they" and "them") has light-colored, straight hair and a sweet and perky disposition. It's completely possible that, when canvassing for people for their bacchanalia, they sounded as wholesome as apple pie with a nipple on top: "Hey, wanna ride on a really cool sex swing?" Shay might innocently ask.

Another popular attraction is the Saint Andrew's Cross. Partygoers are crucified upside down and flogged à la the canonized saint. Playscapes NYC also has spanking benches and wax play. (You drip hot wax on each other's tenders and rip it off once it's cooled.) There are sessions of Shibari, a type of rope bondage that originated in ancient Japan.

In a Zoom interview, Shay explained, "There are typically between 80 and 140 people at our parties. One area in our space is just for mingling. So, if this is your first event, you can enter the full-on play slowly. The Playroom itself generally has about ten mattresses and a ton of torture furniture."

More than just a place for quickies, Playscapes NYC tries to be an intentional community, with a come-for-the-f**ks-and-leave-with-new-friends attitude. Prospective attendees are vetted, beginning with an online questionnaire asking how the applicant defines "consent" and what he, she, or they expect not just from a play party but from an ethical one. Next is an interview. Applicants have to provide personal references. And, of course, guests must produce proof of full vaccination and evidence of a recent negative COVID-19 test.

With lockdown in March 2020, Lexie (also an alias) shuttered her small sex party business. She and her husband sequestered themselves at home.

She hasn't, however, bunkered at home. Most weekends, she and her husband go to sex parties in Palm Springs.

I asked Lexie what she does first thing when she walks into a sex party. For example, are there minutes of awkward conversation?

"Sometimes I still have my bag on my shoulder when someone's tongue is in my throat," she spoke loudly and clearly from a hairdresser's chair about group groping, and she proudly called herself a "slut."

"There is power and transcendence in being exactly who you are," Lexie told me. "When I found the lifestyle, it was the first time I realized there is nothing wrong with me for liking lots of sex with many people and wanting to be naked. There are so many people like me. I am normal. This is normal."

Lexie is a chef. She told me that the food at most sex parties is airplane-snack quality. Her parties' food is different. She serves gastronomic delights. However, in serving the food, Lexie noticed that some young women have too much body shame to eat in front of men.

"Women need to get over this shit where they can't eat in front of a guy," Lexie told me. "I will not be a party to that. Women would come to my parties where there was all this wonderful food and say, 'Oh, but I feel so uncomfortable eating in public.' You'll do all this other stuff with everyone looking but you won't eat? I'd think. But then, there was a young woman who'd always refused to have a plate of food in front of men. I worried about her self-concept and her health. Really, I was concerned. I finally figured out that she was going to be fine the night she told me that she had just simultaneously gnawed on a chicken leg and ridden a dick."

In 2020, because of the pandemic, only 283 people attended. This was good because (spoiler alert) Naughty N'awlins 2020 became a superspreader event. So that other party producers might learn from what happened in New Orleans, Bob Hannaford publicly raked through his decision-making process. As he explained, "I live my life on my sleeve for the whole world to see."

Bob had wondered in early 2020 whether hosting his regular New Orleans event was going to be possible. After all, vaccines weren't generally available. He consulted with state police, local health officials, the fire marshal, at least one virologist, and a member of the White House COVID-19 advisory team.

As Bob explained in a Zoom call, "The advice pointed toward 'don't cancel.' One doctor said to me, 'People are going to come to New Orleans that week looking for sex no matter what you do. You need to create a bubble of protection. You may not be able to keep people altogether safe, but with planning, you may keep them safe-er.'"

And so, Bob and Tess (his wife and co-proprietor) planned. They offered people with compromised immune systems and comorbidities full refunds. They made sure that check-in at the hotel would be touchless and include temperature monitoring, social distancing, and hand sanitizing. Each guest would need to present an antibody test and wear a mask in public places. The regular, elaborately designed Playroom featuring many beds shoved together for big, worm ball-like orgies would be scrapped. The popular Dungeon would be used only for torture demos. At workshops, pairs of chairs would be socially distanced from other pairs of chairs. There wouldn't be a dance floor.

When I commented to Bob about the irony of social distancing and touchless registration for people about to get naked and squishy together, he (like Shay and Lexie) pointed out the importance of consent. Few people want to share germs willy-nilly. They might have specific kinds of sex, however, with people who have taken precautions.

Alas, the best laid plans of mice and men (pun intended, as is the nod to poet Robert Burns) didn't work as well as Bob and his advisors had hoped.

Of the only 283 attendees that pre-vaccine year, 41 (14.48%) developed COVID. As Bob explained in our interview, "In the weeks following the event, I learned that most people who'd gotten COVID hadn't stayed in the safety bubble we'd created. They'd partied out in the Quarter and taken off their masks."

The next year, 2021, Naughty N'walins was held during the delta surge with much better results. According to Bob, of the 1,200 people who braved attending, only 10 (.83%) got sick.

"Keeping things safe was a lot of work," Bob told me. "But everyone had a magical experience seeing friends they hadn't seen in a year and a half. Our events are just as much about camaraderie and friendship as they are about sex. There's a collective spirit — no less than there is among people who do needlework together or who support the same ball team. We all need to socialize and congregate with people like us."

For the sake of that community spirit, here's hoping that omicron will have waned by July for Naughty N'walins 2022. Plus, Bob says the Playroom and Dungeon will be back in action this year.

I have no doubt that the social scene at lifestyle parties can be marked by caring and friendship. At the same time, sexual appetite appears not to be reliably pro-life, propelling otherwise careful people into taking mortal risks.

Some animals, like humans, are dying to mate. Members of the antechinus genus (a mouse-sized Australian marsupial) have so much seasonal, multi-partner sex that, at the end of several weeks of it, all of the males go blind and then fall from the trees, dead. Male brown widow spiders willingly hurl themselves into the jaws of hungry mates.

As a general rule of nature, female animals evolve to fare well during and after sex that is fatal to males. Likely that is because, once inseminated, they have babies to bear and feed.

I now understand that, for some people, the "lifestyle" is their community. Like members of any supportive group, they want to see each other. However, with Covid, just getting coughed on can be fatal. Why don't they keep their pants on during this emergency like the rest of us do? Is the fact that people go to orgies during a pandemic evidence that Charles Darwin was right — that, for many animals, the mating urge can overwhelm the tendency towards self-protection? Or was Sigmund Freud right when, for human animals, he linked his hypothetical life instinct (Eros) to a death instinct (Thanatos)?

Was Jung correct when he called sex a power that both beautifies and destroys?

Rhetorical questions, all. I do think, however, that Dr. Lehmiller may have been onto something when he gave a nod to pandemic boredom and stress. Two full years into our acquaintance with the virus known as SARS-CoV-2, I for one seem to have developed a rhino-skinned emotional hide. If that's common, and if some people need to play with mortality in order to feel something through that hide — well, who can blame them? Perhaps there is something apt about the French idiom for "orgasm," which translates to "little death."