Why is Joe Burrow so great? Because he’s from Appalachia

My son was born in the same rural county that gave rise to Burrow, where giving back is a way of life 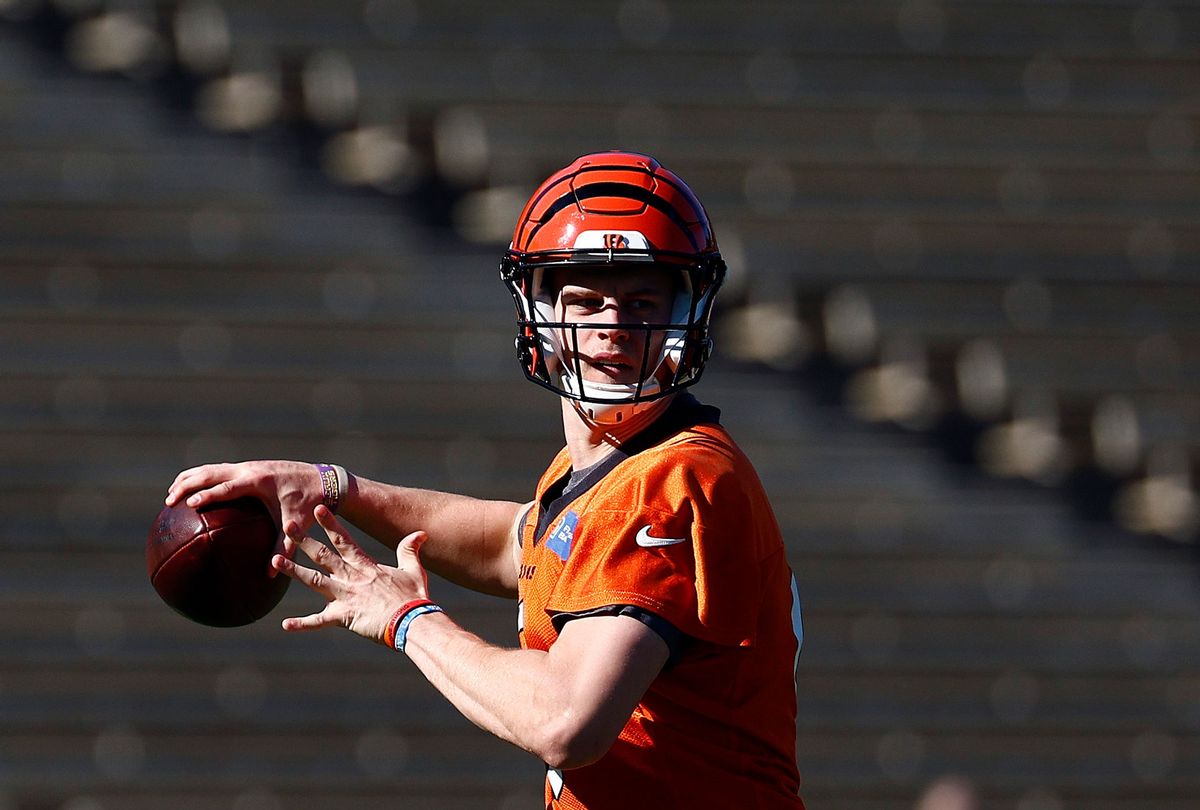 You may know Joe Burrow as the 25-year-old quarterback leading his team, the Cincinnati Bengals, to their first Super Bowl in over 30 years. You may know him as the soft-spoken, polite athlete who plays chess and who cried during his Heisman Trophy acceptance speech (which later launched a half a million dollars in donations).

But before that, he was a high school kid in my town taking college classes, like my friend's English course, where he wrote a paper about his dream to be a football player at The Ohio State University (he accomplished that dream, but when he didn't play, he transferred to LSU). Before that, he was in middle school with a girl I babysat. He grew up in the county where my son was born and where I lived for much of my life: rural Athens County in southeast, Appalachian Ohio.

There are facts about home: It's often ranked as the poorest county in Ohio, and one of the poorest communities in the United States. It's a 90-minute drive, each way, from a major airport. The creeks in the woods are orange-red because of acid mine damage. When the spring floods come — and they always do — they swallow the bike path and parts of roads that are the only way into or out of some of the smaller villages, cutting these places off.

But as Burrow has risen from the high school star who made the local papers every Friday to Heisman winner, the way those facts are presented continues to be disappointing. The rest of the world likes to talk about rural poverty and the Appalachia where Burrow grew up in a certain way. Mostly: othering and miserable.

A "dusty old town, a place still wheezing long after the coal miners left," wrote the Washington Post. (Coal mines are still operational there, and Appalachian Ohio is way too humid and green to be dusty.)

Burrow came from "humble beginnings" wrote thousands of journalism outlets from Larry Brown Sports to Sports Illustrated. (Burrow is the son of a former football player and university coach, and while being Associate Head Coach at a place like Ohio University in Athens does not pay as much as other institutions, football is certainly in the younger Burrow's blood).

My sport was dance. I was kicked off the gymnastics team when I grew too tall, and dropped out of swim team due to anxiety. I can't write with authority about how Burrow plays football. But I know what makes him special. It's the place where he — and my son — was raised.

Related: Echoes of that "Ted Lasso" Midwest niceness in "Somebody Somewhere"

One morning early in my son's life, I opened the porch door to find a stranger standing there. She had a restaurant-sized tray of homemade enchiladas and a jar of brownies. She was out of breath and apologized. "I'm sorry I didn't come sooner. I just found out."

I had no family close when my son was born. My husband at the time didn't live with us, and soon would not be my husband. Appalachian Ohio became (and is) my family. The woman was the first of many to show up at the door with food. The chain had been activated, and for months, I would come home to find meals on the porch. After that, came the clothes: baby clothes for my son. Blankets.

The chain sets in motion in Appalachian Ohio upon births, deaths, illnesses, hardship. Strangers give to strangers. People who have very little give to those who have less. Long before swaths of the country had even heard of mutual aid — where community members help each other cooperatively, something that took off during the pandemic — I experienced it firsthand in southeast Ohio.

When I asked how much I owed the owner of the repair shop for fixing the tires on my ancient Honda, he looked at the car seat in the back, and said, "You don't owe me nothing. Just keep that baby safe."

My son had been born in a rural and remote part of the state where, as Burrow mentioned in his now-legendary Heisman speech, the food insecurity rate is much higher than the national average. But I've never been to someone's house in southeast Ohio — no matter how so-called "humble" — without being offered a meal.

At the chicken restaurant, the fry cook peers out of the order window to see who's ordering, how many children they have with them, and adjusts the free pieces of chicken she puts in the bag accordingly.

The Italian restaurant offers free lunches every Tuesday. You don't have to say anything. You just stand outside and the owner will bring food to you. One summer, the restaurant gave away free seedings. I took an armful, and when the vegetables grew strong in the garden, I put the squash and peppers on my neighbors' porches.

That's the way of it. You pass it on. You can't walk down a street in my son's hometown — and Burrow's home county — without seeing plant starters, vegetables, bags of clothes or canned goods out by the curb with a note that reads Free. Please take.

When my son started elementary school, I learned to pack a double lunch in case he met a classmate who was hungry. I left a bowl of food on the dining room table always, in easy reach of small hands, whatever children might come in the house (and my son invited many).

Once someone has helped you, you learn to offer help to others, however you can in Appalachia.

"I tried to leave a legacy of hard work and preparation, and loyalty, and dedication everywhere I go," Burrow said in his speech. He was talking about football, but could also be speaking to growing up in Appalachia where my son learned to shovel sidewalks with our neighbor (a retired coach too), and by the time he was in first grade, would clean the walks and porches of elderly folk.

Burrow's Heisman speech — where he mentioned his family so many times I lost count, but he also mentioned home again and again — triggered a chain of help that has become the largest outpouring Athens County has ever seen. A fellow Athens High School grad watched Burrow's speech, and set up a donation page for the Athens County Food Pantry. In a week, people had donated half a million dollars, an unprecedented amount, and donations that proved invaluable as southeastern Ohio was hit hard by the pandemic.

Donations keep coming. On Super Bowl Sunday, the church of my former high school teacher, retired now in a city hours from Athens, is passing out 300 boxes to be filled with food and donations meant for southeast Ohio. She told me it's "motivated by the giving Joe Burrow has done."

Back in Athens county, restaurants are offering specials like the Burrow Bowl, the Cup of Joe at one of the coffeeshops, the Go Joe shot at Tony's Tavern, with some proceeds going to the food bank.

Burrow does charity work himself, like the NFL's "My Cause My Cleats," where he raffles off cleats with proceeds to go to the Athens County Food Pantry. But beyond the gigantic gift of financial help and motivating others, Burrow's speaking openly about poverty, about hunger — that's a gift too.

NBC Sports interviewed a teacher, Sarah Crabtree, who shared a letter written to Burrow by one of her students at Federal Hocking Middle School: "You have inspired me to not be embarrassed by my life story and work hard to achieve my goals . . ." The student signed his name, and under it wrote: "Just a kid from Southeast Ohio." "

The phrase – a riff on the LeBron James quote, "I'm just a kid from Akron" – has taken off, appearing on signs, mugs, walls painted in support of Burrow in Ohio. On a sweatshirt my son wore to school the Friday before the Super Bowl. His shirt is supporting the Bengals and Burrow, of course — but it's also supporting him, my son, and kids like him, kids born into poverty in a place people didn't give much thought to before, forget about putting it on a T-shirt.

But it's not just that Burrow plays well, better than anyone from southeast Ohio in recent memory, and that he has gone farther than anyone too. It's that he openly acknowledges he didn't get to the Super Bowl or the NFL or even to college alone.

Burrow wasn't even born in Appalachia; he was born in Iowa. But Appalachian Ohio accepted him (as it did me). And it made its mark on him the way only the most special places can. He speaks of it, positively, while still being honest about the poverty and problems. He comes back, throwing footballs to local kids while waiting for the draft pick. He remembers the place where he was raised, and he makes sure the people there are remembered too.

When Burrow won the Heisman he said, "I'm up here for all those kids in Athens and Athens County that go home to not a lot of food on the table, hungry after school. You guys can be up here, too."

My son and I left Appalachia, the first summer of the pandemic. We left home, and moved across the country to Colorado, where my partner has family and where one of my siblings live. We left for work, and we left for my son. Because, like most parents, I want my child to have a better education than I did, a better chance. He takes after-school art classes where we live now. We have a choice of public middle schools where he can take advanced science. Here in the mountains, he's discovered a love of rocks. He has posters of gems on his walls, and dreams of attending college for geology.

We have a dishwasher now. Last winter, the heat didn't go out once, and the water never does. For the first time in my son's life, we are not living below the poverty line. But I don't know our neighbors. I don't know how to help. And I dream every day of a way to go home and contribute to the community that saved my life when I was a young mother with nothing.

National newspapers, people not from there, people who never lived there, will tell you that Burrow is bringing hope to southeast Ohio. But southeast Ohio already has hope. What it doesn't have is infrastructure and the jobs and educational opportunities of elsewhere, through no fault of the people who live there.

The hope that Burrow brings is really for children, like my kid from southeast Ohio. That you can make something of yourself. You can come from anywhere. Never forget where you came from. And, as is my deepest wish for my son, home will always be there for you.