Echoes of that "Ted Lasso" Midwest niceness in "Somebody Somewhere"

The HBO series, the latest in kinder comedy, asks: Can you have everything you want in your hometown? 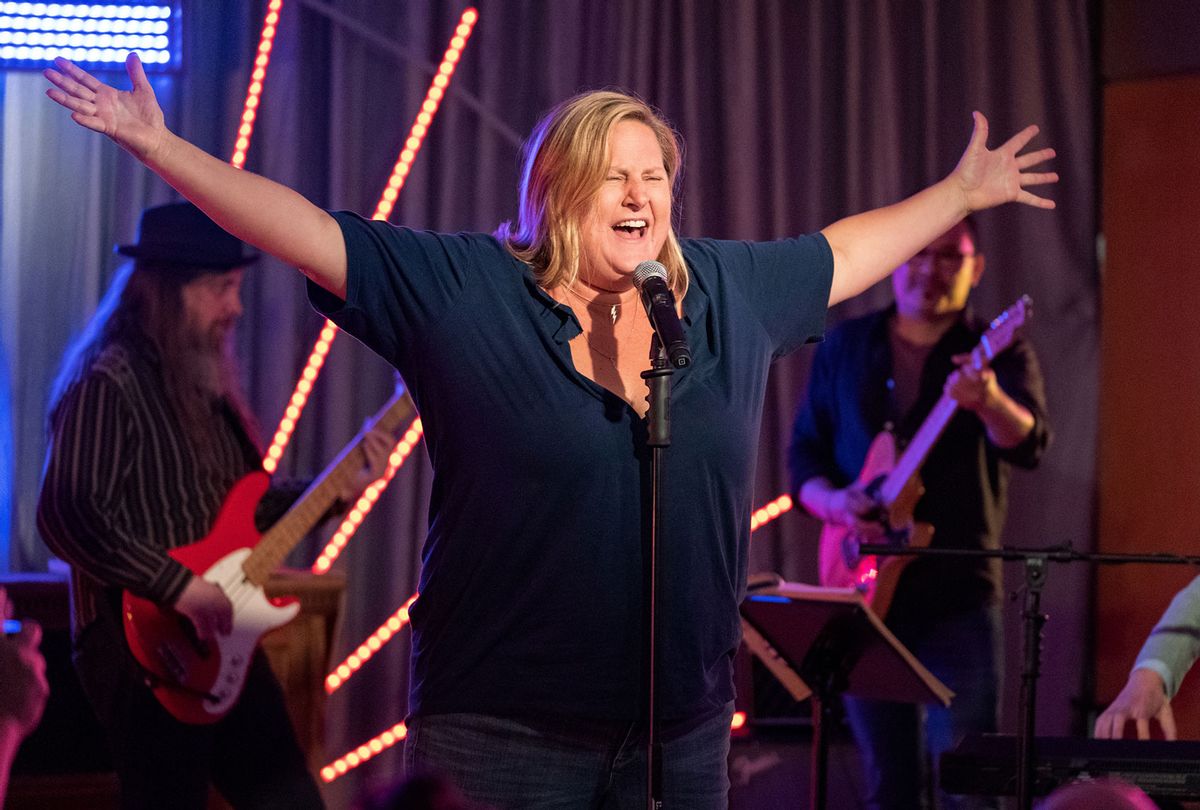 People love where they're from, even if that place seems terrible. Take it from me. When I was in high school, my Ohio town was voted by US News and World Report the worst place to raise children. In America. Would I move back to Ohio? In a heartbeat. I have once already.

"Ted Lasso," the Apple+ series that swept our hearts and swept award shows starting in 2020, built upon the charm of a Midwestern guy, Jason Sudeikis' Coach Ted Lasso. He's going through an emotional divorce, is separated from his kid, and dealing with all the issues that come with being hired to coach a sport you know nothing about in a new country you also know nothing about.

But despite these times that would try anyone, Ted remains good-natured, loving and small town nice. So does the show, which proved by example: You can have humor without spite. You don't need to be hurting someone or mocking them to tell great jokes. Comedy can be kind.

"Somebody Somewhere," the new show on HBO, seems like the next in line for nice comedy. It has fewer laughs but is heavy on the aching bittersweetness. It's also set in the kind of Midwestern place that gave rise to Ted (and to Sudeikis, who is from Kansas City): Manhattan, Kansas. That's where star Bridget Everett, who also serves as executive producer of the show, is from.

"Somebody Somewhere" asks the question: Is it enough for comedy to be kind? Is hope enough to hang a show on? And is "the eighth largest town in Kansas" big enough to hold it?

Related: Meat Loaf taught me it's OK to have big dreams

"Somebody Somewhere" follows Sam (Everett, incredible in everything she touches) who has moved back home to Manhattan, Kansas, to care for her sister. Her sister has since passed away, but Sam is still around, working at an educational testing center; dealing with her family, including her elderly parents and meddling other sister; and rekindling a friendship with a former high school classmate. Or maybe, establishing a friendship that didn't have the chance to exist before.

It's hard to make friends as an adult, and "Somebody Somewhere" taps into the pandemic longing for companionship that Hulu's "Only Murders in the Building" also hit as a raw nerve. Sam is lucky enough to find a friend in fellow alum and testing center co-worker Joel (Jeff Hiller). And she's lucky that her hometown has a subculture of creative, loving and queer folk.

That kind of community isn't allowed to survive in all small towns, though it did exist in mine, where I spent long nights in a community theatre that used to be a church. Under stained glass windows painted black, older gay men gave me the best advice of my life. Unfortunately, I didn't follow most of it.

Sam is at an age where some of that advice might feel too late. "I don't know when you think that real life starts, but you're well over 40. So, you're past the point," her sister (Mary Catherine Garrison) says. Sam is a talented performer for whom not a lot went right. What happens when a yearning Disney heroine grows up but never gets far — and was never a princess to begin with?

"Somebody Somewhere" has less of the feel-good shine of "Ted Lasso," maybe because there's no pot of gold at the end of this rainbow. Despite the show being set in Kansas, there might not be a rainbow at all (or, only in the wonderful supporting ensemble of queer characters). But without family support, without money, how can you realistically hope to make dreams come true?

Let's be honest, everyone in "Ted Lasso" has a really good job. Half of the characters are footballers, after all. One of the subplots involves a player, Colin (Billy Harris), who can't handle his Lamborghini. Roy (Brett Goldstein) makes a bet with his girlfriend (Juno Temple) and his niece (Elodie Blomfield) for a thousand pounds. Money isn't the conflict here or an issue for anyone, including Ted, whose family back in the U.S. flies to the UK for a visit like it's an ordinary weekend trip.

"Somebody Somewhere" is more gritty and real. There's that testing center. Sam has older parents in poor health, struggling to do the work a rural home requires. In a world where "And Just Like That" is serving up concierge healthcare and million dollar gifts to ex-wives, we still don't see working class characters often enough, at least not where the humor doesn't come at their expense. The characters of "Somebody Somewhere," meanwhile, are treading water in the lower middle class. And they're not cool, like Roy. Joel looks ridiculous in his Zumba workout clothes. Ridiculous and adorably relatable.

Sam still sleeps on the couch. She first meets her neighbor after she comes out onto the porch to yell at him for using power tools. Exhausted, she's only wearing a baggy shirt and underwear. But the show doesn't mock her for that. It's good-natured, in part because Everett can laugh it off. One of the joys of the show is watching her in any situation: her reactions, how she calmly puts up with continual passive aggression. The viewer is drawn to Everett like a laser. But unlike Ted Lasso, Sam only puts up with others' criticism of her for so long.

There's a lot to write about in small towns, a lot of stories still untapped. Small towns hold on to their secrets, and their gifts. Yes, gift shop is spelled shoppe. Yes, there are strip malls, novelty flags and the town's name written in the hillside. But Joel, who is openly gay, also introduces Sam to a friend, the wonderfully named Fred Rococo (the equally wonderful Murray Hill): soil scientist by day, MC by night, who is confident enough to tip extra well when a restaurant server expresses confusion about Fred's gender identity. Can you be yourself in this town? It would seem so. 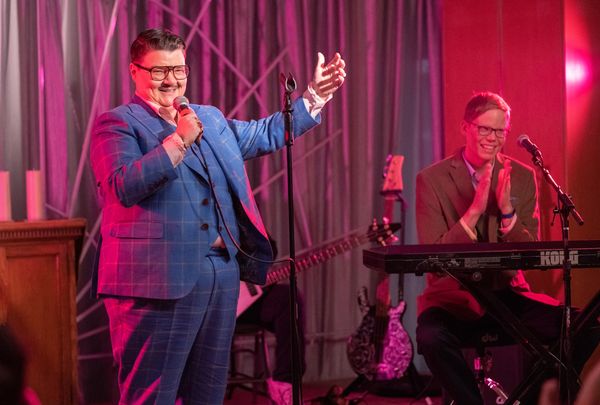 Murray Hill and Jeff Hiller in "Somebody Somewhere" (HBO)

Joel has high hopes for his life, hopes that might seem small in comparison to big city dreams, but because he wants to stay in Kansas and accomplish them, they take on larger-than-life boldness: to get married, to have a family.

Despite the divorce, despite trauma from his past, despite starting over in a whole new sport, and despite ongoing mental health issues, Ted Lasso is a success. At the end of the day, his team wins. Quite a lot, actually. Or at least, enough. What if Sam doesn't?

It doesn't sound like she ever made it out of Kansas, at least not very far. Perhaps only to a larger, nearby city, as many of my friends from high school, those who got out, ended up in Columbus, which has a large population of Appalachians who came from smaller, rural towns to the south. I remember how people's faces lit up when I told them I'd moved to New York City — not for the performing arts, as it turned out, but for marriage. And I remember how their faces fell when I told them I was back, after that marriage broke.

There's shame in going home, and there shouldn't be.

Can you have everything you want in your hometown? Like Joel, "Somebody Somewhere" seems to think so. Or, you can have what you need.

Maybe there's no rainbow, but there is a velvet curtain lifted when Sam goes to the church, in the dying mall — which could be the mall in "Eight Legged Freaks" or the mall in my town or maybe your town too — where Joel is having "choir practice" (really an excuse for creative people, some of them queer, to hang out, talk and sing together).

It's a scene that echoes Dorothy coming out of her black and white, ruined Kansas farmhouse into the colorful world of Oz. When everything started to change for her.

As Kansas City native Melissa Yeager wrote in an article where she interviews Kathy Sudeikis (Jason's mom): "The uplifting part of 'Ted Lasso' is in the aftermath. It's in the tenderness of how the characters, led by Lasso, treat those broken pieces with a sense of human dignity." And those broken places too.