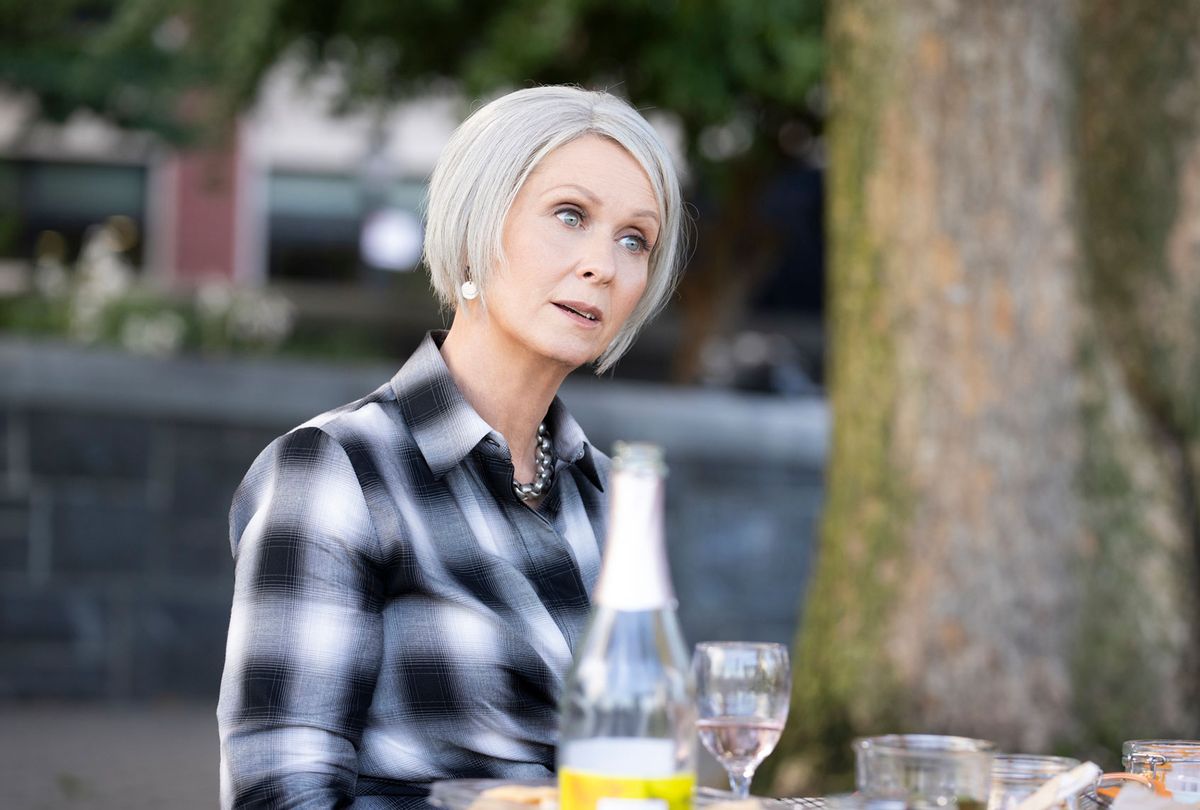 Cynthia Nixon in "And Just Like That..." (Craig Blankenhorn/HBO Max)
--

A big part of the episode "Diwali" in "And Just Like That," the HBO Max show that reanimates "Sex and the City," reminded me of a different, much earlier series.

Miranda (Cynthia Nixon) has confessed to her friends that she had sex outside of her long, monogamous marriage, sex with a mutual friend who is nonbinary. Carrie (Sarah Jessica Parker) already knew, having been not-really asleep after hip surgery and in the very next room at the time the indiscretion occurred, overhearing much of it. But when Cynthia gets up the courage to tell Charlotte (Kristin Davis), her longtime friend, Charlotte's reaction is extreme, outdated outrage directed at the wrong part of the experience.

Her mouth falls open. She recoils from the picnic table where the women are seated, having an otherwise lovely sunset meal. A gasp escapes her, a what?! loud enough to make Carrie physically flinch. Charlotte is reacting to the fact that her friend had sex with a queer person — not that the sex happened in Carrie's kitchen, or even that it happened while Miranda is currently married to someone else.

Carrie doesn't help things. She avoids eye contact. She looks disgusted. "Are you not fine with it?" Miranda asks her. "I don't even know what it is yet," Carrie says.

The reaction of Miranda's friends to her queer experience called back my deeply problematic, childhood favorite "Buffy the Vampire Slayer" when the character of Willow (Alyson Hannigan) comes out to her best friend and roommate, Buffy (Sarah Michelle Gellar).

"Oh," Buffy says. "Oh." She quickly stands up from Willow's bed where she had been perched. "Tara's a really great . . . girl." She keeps saying Wil's name and moving awkwardly, restlessly, around their shared room. "Are you freaked?" Willow asks.

Buffy at least recovers somewhat quickly, turning supportive, unlike Willow's ex-boyfriend (Seth Green) who physically assaults Willow's girlfriend, Tara (Amber Benson) once he gets a whiff of their relationship. "STOP! Is she in love with you?" He shakes Tara violently. "Tell me." Then he transforms, as one does in the Buffy-verse, into a vicious werewolf, and tries to murder the woman with whom his ex has found love. The show always was heavy-handed with its metaphors.

Here's the thing. That episode of "Buffy" aired in 2000. "And Just Like That" is airing in 2021. That Miranda's grown adult friends — in their 50s, but acting, in most regards, like much older people — might have the same disgusted reaction to a friend coming out to them as teenagers would decades ago is an issue.

They're not disgusted at the right thing. Miranda is cheating on Steve (David Eigenberg), with whom she has had an apparently now-sexless marriage for years, and who is the father of her child. The fact that it's marital infidelity merits barely a mention, nor does the fact that Miranda feels happy — alive, as she says — for the first time in a very long time.

It's the queerness that her friends object to. Charlotte seems not to understand how a woman would have sex with someone who is not a man, leading to an offensive and tasteless exchange about "a finger." It's immature. And it's othering.

The object of Miranda's new affection is Che (Sara Ramirez), Carrie's podcast boss, a standup comic and as Kevin Fallon writes in The Daily Beast: "one of the new characters added to the series in a woke panic." In a desperate attempt to address the utter lack of diverse characters in the first go-round of "Sex and the City," the HBO Max show throws characters and issues at the wall like spaghetti, hoping something is done and will stick. One of Charlotte's tween children is experimenting with a new name and new way of dressing, for example, and contributes to the nonbinary anxiety that rises up in Charlotte. So many plotlines, each barely touched-upon, including the ones about gender, reduce what could be relevant, contemporary stories to after school specials.

In a weird reversal of how the main trio of woman speak and behave much older than their characters are supposed to be, Che is a person in their 40s who acts like a terribly behaved teen, giving Miranda's underage son marijuana at a party, shotgunning Miranda from a vape pen, and of course, having casual, tequila-fueled daytime sex with her while Carrie is just a few feet away.

Che's only appeal to Miranda is, so far, sexually. They certainly aren't a good friend, supportive or trustworthy. After the two have sex — Miranda's first-ever queer experience — Che forgets to message Miranda back for months because . . . Che has apparently smoked too much pot to remember her? How does this person hold down a steady job?

Steve, Miranda's husband, barely enters into the conversation in part because the show has done a good job of suddenly making him a foil. He has had few scenes so far, and his only character development is that he now wears hearing aids due to age-related hearing issues. His first four lines (yes, I counted) are all some variant of "what?" "And Just Like That" is a stunning example of how not to write a disabled character. Like the women, Steve seems doddering, confused, and older than his age: forgetting his wallet, unable to find Miranda in a public place.

Miranda's (and Steve's) storyline is a huge missed opportunity for the show. A middle-aged woman struggling with new and different sexual feelings, struggling to define herself as a long marriage evolves (or maybe dissolves), and she herself changes is turned instead into caricature. The show plays both disability and complex human sexuality for cheap and cruel laughs, and takes what could have been an important moment — a not-young character possibly coming out to her friends — into antiquated moral panic.

"You are not progressive enough for this," Charlotte tells Miranda, calling her sex with Che "a midlife crisis," and further insulting Miranda's looks: "You should have just dyed your hair." But even Carrie does not show empathy for her friend. When a visibly upset Miranda tries to remove herself from the situation, Carrie tells her: "You can disagree, but you can't leave," calling to mind for me hate the sin, not the sinner, and the cloying bromides of let's disagree to disagree — wishy-washiness that doesn't work when someone's humanity has just been called into question.

With every episode, "And Just Like That" chips away nostalgia for the original show with grating storylines and widely drawn stereotypes. "Sex and the City" may have provided a sort of fantasy getaway in the wild lives and wilder clothes of the original women, but anyone looking for a comfort watch here will be disappointed. This isn't an escape. It's a trap.