An abusive reckoning for "Buffy," a badass, occasionally feminist show created by a monstrous man

I've been rewatching "Buffy the Vampire Slayer" with my son, and its teaching moments aren't what they once were 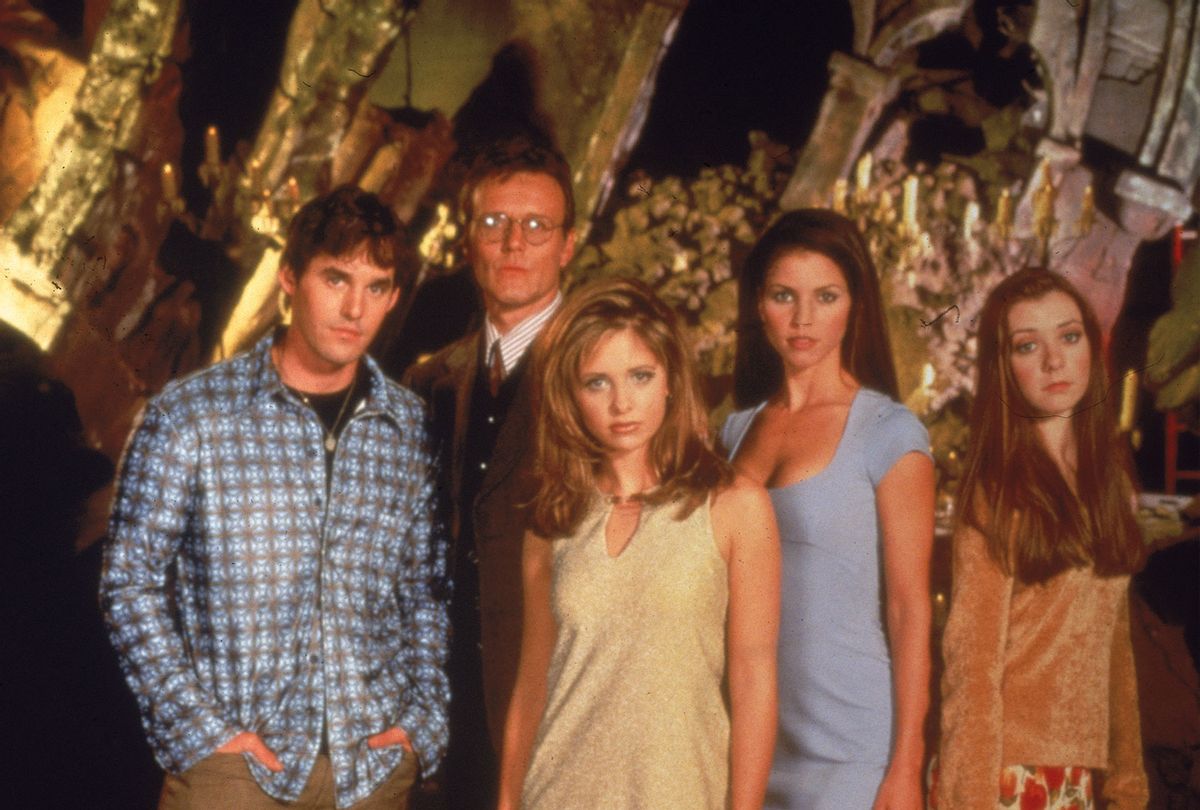 "Were you interested in witches before Willow?" my partner asked. We were on Season 6, the second to last season of "Buffy the Vampire Slayer," a show I have seen many times but was introducing to my partner and 10-year-old son.

I hadn't intended to do a "Buffy" rewatch — but the pandemic has compelled us to do many things we never thought we would: cancel plans; stay inside; admit to your partner you know all the words to the "Buffy" musical episode "Once More With Feeling," and in fact, own the cast album.

In many ways, "Buffy" is a good show for kids like my own, who is funny and wise: the jokes aren't complicated, the monsters aren't scary, and the main characters are badass women, important for my child who has been raised by a single mom.

But how badass can a female character be if she was created by an abusive man?

Last week, Charisma Carpenter, who played Cordelia in the show, publicly accused "Buffy" creator Joss Whedon of abuse, including mocking her faith, taunting her about her weight while she was in her second trimester of pregnancy, and firing her from "Angel," the "Buffy" spinoff Carpenter appeared in at the time, once she had a baby.

Multiple cast and crew have since come forward to confirm or show support for Carpenter's claims, including Sarah Michelle Gellar (lead slayer Buffy), James Marsters (Spike), and — after deleting his Instagram and making his Twitter private — David Boreanaz, who played Angel in the show and spinoff and who settled in 2011 a sexual harassment lawsuit brought against him by an actress.

Carpenter spoke publicly now in large part to support actor Ray Fisher, who accused Whedon of "abusive, unprofessional, and completely unacceptable" treatment on the set of "Justice League." Last year, WarnerMedia did an internal investigation on Whedon. But while the investigation has been concluded and "remedial action" taken, it's unclear what those actions are. Blaming the pandemic, Whedon recently left his new HBO series, "The Nevers."

Carpenter's accusations felt like déjà vu to me, like I was stuck in the "Buffy" episode where time  keeps repeating. I thought Carpenter had already come forward — but maybe I was remembering how her character was totally annihilated and died off-camera? (Most pregnant characters on Whedon's shows suffered similar fates.) Or maybe I was remembering the allegations from Whedon's ex-wife Kai Cole of serial cheating and decades of psychological abuse?

Or maybe I was just paying attention to the show, which wears its misogyny on its sleeve.

Casual sexism seeps through most episodes, certainly each one written or directed by Whedon; my partner and I realized early on we could tell. Is there a joke about breasts? A joke conflating witchcraft with lesbianism? Is Xander (played by Nicolas Brendon, who has not commented on the abuse claims) aggressively pursuing Buffy even though she has repeatedly expressed disinterest? As a teenager, the sexism of "Buffy," which I watched faithfully, was such a part of my own daily life, it barely registered. Whedon's show kinda seemed to hate women — but didn't everyone?

As a younger Gen X-er, I think I am not alone in that the dawning of #MeToo and women speaking more publicly about abuse called into question the way I had survived the world. How could I account for my entire life before? I can't even count how many times a man (a teacher, a boss) commented on my body, what he wanted to do to me, though I remember the first time: when I was nine years old.

I knew everything that happened to me wasn't OK — but everyone said it was, and it happened to so many girls, to all of us. It seemed like a collective hallucination we were having, a nightmare we just couldn't wake up from.

How you survived girlhood was together with other girls. You were facing a Big Bad every season, every day — and he only changed faces: the neighbor boy ("If you died now you'd die a virgin," he told me at 13), the deacon at your church ("You've really blossomed," as he sidled up to me when I was in middle school), the 9th grade English teacher (we girls had a secret hand signal for when he was looking up our skirts; we called the non-consensual shoulder massages he gave us the "Gerber squeeze").

This is the world of "Buffy" too — the world Whedon made and maintained. Though the show included women writers, notably Marti Noxon who went onto to write for "Mad Men," "The Girlfriend's Guide to Divorce," and "Sharp Objects," Noxon has confirmed Whedon's abuse. Whedon bragged about making women writers cry, according to screenwriter Jose Molina. One of Whedon's tactics was forcing writers to relive the worst day of their lives and then mining that trauma for plot.

An example of this is one of the most awful episodes, when Spike attempts to rape Buffy. The scene is stomach-churning, not in the least because it is played for maximum distress (and traumatized actors during filming). This scene pokes another hole in Whedon's self-proclaimed feminism: that women can only be really strong if the source of their power comes from their sexuality or from "overcoming" trauma. Of course Faith, another slayer, is promiscuous. Of course sex with Buffy turns Angel evil — her sexualized teen body is that powerful.

The rape scene seems totally out of character and to come out of nowhere, though Whedon stated his reasoning was to remind viewers that Spike is a vampire and therefore "soulless." What's the easiest way to do that? Have a sympathetic and frankly, non-toxic male character suddenly rape.

Much in the way in later seasons Willow shifts from kind and loyal to someone who lies, cheats, and is vindictive to a woman friend, this slipshod character development sometimes renders the dialogue of "Buffy indistinguishable. Characters are more like mouthpieces for Whedon, and less like fully realized individuals. So Dawn, a teenager, says the same fifty-cent words as Willow. Cordelia, who is not Southern, says "bubba." And Xander (the character Whedon said he based on himself) calls Cordelia a "hooker" and Buffy "a little slut," ogles Dawn from behind, and spouts lines like "the more I scare you, the better you smell."

Characters are the mouthpieces not just for the sexism of Whedon, but for racism and ableism. There are few characters of color (mostly caricatures with heavy accents), and those are swiftly killed. My partner, who is Chicano, filled up his phone with screenshots of "Buffy"'s racism, which is directed acutely toward Mexicans. Giles dresses in a sombrero, characters returning from Mexico talk of speaking "Mexicano." As a partially deaf person myself, the overt ableism of the show is difficult (characters say "lame" and "retard" and make fun of lovable demon Clem's deformity).

I do believe "Buffy" still has redeeming qualities, namely in the work of its actors. Emma Caulfield (Anya) makes even one-word lines hilarious. Anthony Steward Head (Giles) does the same for complicated exposition. Marsters turned a throwaway villain into a leading man (and responsible babysitter) who is still one of my favorite characters in any story.

The strength of "Buffy" is its ensemble, not the titular character but the Scooby gang who support her. This not only reinforces that even heroes can't actualize in a vacuum (Spike or Clem need to babysit, Willow needs to hack a computer system, we need a small loan from Giles), it impacted my own creativity. My first novel "Road out of Winter" features a group trying to make it across the country during an apocalyptic snowstorm. My second novel takes the idea of the group even further; this time, I wrote about a whole community. I know that "Buffy"'s ensemble lodged itself in my heart.

There are great moments of female power in "Buffy": Willow learning to control her magic, "Buffy" knocking out — twice — the boy who used her sexually, the slayer sacrificing herself for her sister. The musical episode is wonderful, although some of the songs' time changes and discordant "harmonies" left my partner and I, both with musical theatre training, confused. Written by first-time composer Whedon, it seems another example of his unchecked license.

"Buffy" also has many teachable moments. I've been surprised in this rewatch to realize how many lessons are about toxic relationships. "That's abusive!" my son called out when Willow cast a spell on her girlfriend to make her forget a fight. We can identify Riley's behavior — jealous of Buffy's abilities, harming himself to get her attention, giving her ultimatums — as abusive in way that was lost on me when I was 20, a time when that lesson could have altered my life. I hope it can help my son.

"Buffy" made me interested in my own power — yes, including witchcraft, or specifically: herbalism, studying and caring for plants in a way that has fundamentally changed me. I've made my own magic in my books. But I'm still and will always be disappointed that a show set in a supernatural universe, a world where magic is possible, couldn't imagine beyond sexism and bigotry, that its creator could only confirm it, again and again.

Why does teen Dawn have to describe a hamburger as a "meat party in my mouth"? Why is Cordelia constantly shamed for the way she dresses? Why are multiple strong women (Buffy and Faith, Buffy and Kendra, Willow and Anya) pitted against each other? I'm reminded of a friend who complained about the sexual violence in "Game of Thrones." "But," she rationalized, "that's just how it was back then."

The monsters of "Buffy" aren't scary. But the monster of Whedon is, as is the precedent he has counted on his whole career: people looking the other way; people (men) in a position to make change doing nothing, saying nothing, allowing abuse to continue, mistreatment to escalate, and a sophomoric abuser (who created another show where the plot is literally raping people every night and erasing their memories) to rise. If only we could slay that.