The vampire spinoff, which premiered two decades ago, is a classic workplace drama 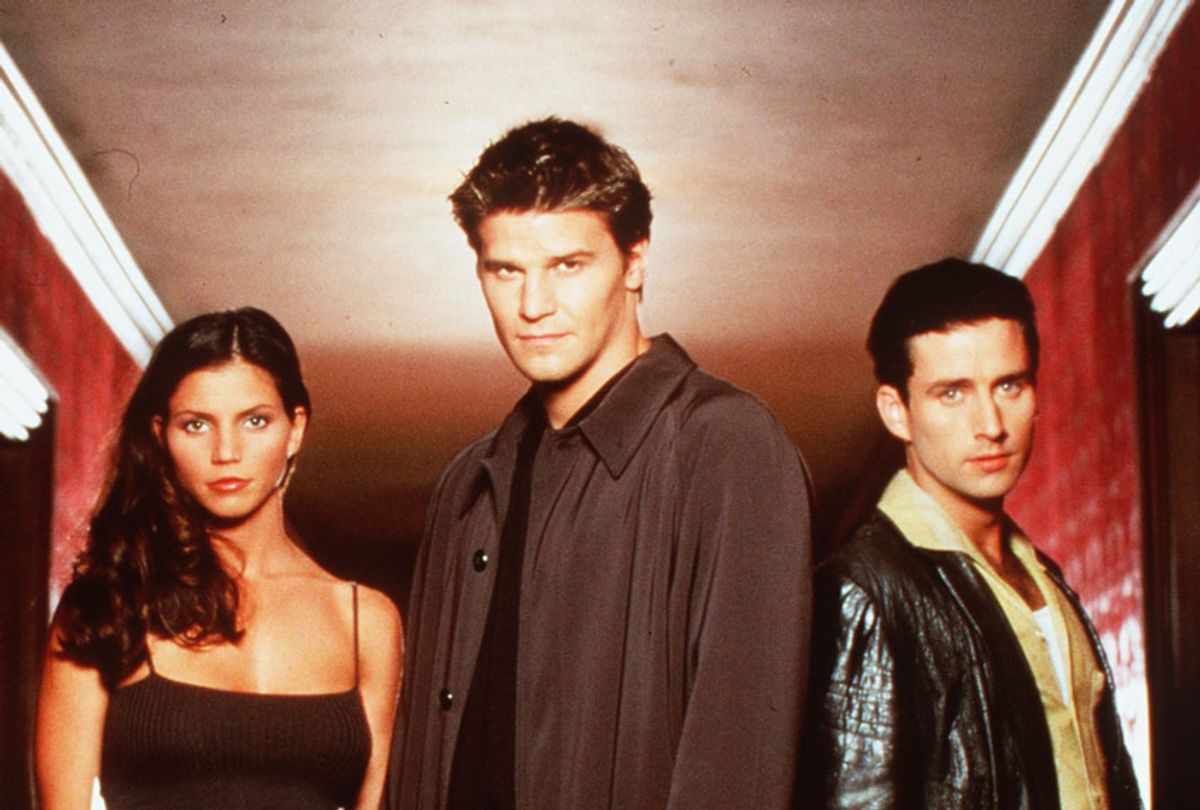 Spinoffs tend to be the runners-up of the broadcast world, and often with good reason. For every beloved “Fraiser” or “Better Call Saul” or “Daria,” there are at least 10 “Snooki & Jwoww” or “Joey” flavored misfires. Even when a spinoff is a relative hit, audiences tend to accept their ancillary role, knowing that “Young Sheldon” or “Mixed-ish” were created in service of the long-running powerhouses that preceded them. That’s why it’s something of a surprise to me to realize, 20 years after the fact, that “Angel” is actually a better show than “Buffy the Vampire Slayer.”

When “Angel” debuted on October 5, 1999, it was a calculated extension of “Buffy’s” success — grittier, more grownup, and an almost certain ratings draw. As a centuries-old vampire with a tortured soul and a tenuous grip on an Irish accent, David Boreanaz was already one of the biggest male stars on the still growing WB network. In his three seasons with the Slayer, his character had not only become a series regular but had evolved from brooding, Vitamin D-deprived boyfriend to scene stealing Big Bad to charismatic leading man. Now, after existing as a fearsome bloodsucker and a cursed immortal, after surviving a stint in a hell dimension and the weirdest high school graduation ever, Angel’s journey would take him on his most challenging adventure ever — holding down a job.

Over the five-season course of the series, Angel would become an independent businessman with his own investigation agency, and then, like so many individuals who move to the big city with big dreams, find himself somehow parenting a sulky teen and working for an evil behemoth corporate entity. “Buffy” famously made real the universal truth that high school is hell. But before “Mad Men,” before “Breaking Bad,” before “Barry,” and running concurrently with “The Sopranos,” “Angel” explored what it takes to live in the material world and try, quite literally, to not lose your soul.

My colleague Melanie McFarland recently pointed that in its time, “Buffy” was unquestionably revelatory. It still stands as one of the best television series ever made, in any genre, with one of the form’s most iconic characters. But while “Angel” may have been a later series, it’s not a lesser one. Looking at it today, one can appreciate its wit more deeply, can see even more clearly its clever exploration of the endless moral compromises of everyday life. “Angel” asks: Can I change a venal system by becoming part of it — or am I just kidding myself? Does a wrong over here make a greater right over there? What’s the line between self-sacrifice and self-interest when they look so much alike, so often?

“Angel” also inventively allowed for rich character development. For evidence, look no further than the arc of Wesley Wyndam-Pryce (Alexis Denisof), who started out on “Buffy” as a cartoonishly uptight watcher and turned out to have a dark streak that could make Christian Grey shudder. His icy “I’ll take away your bucket” moment with Justine is among the most memorable of the whole series, the one that made you realize that nerd was not messing around. And don’t even get me started on Spike (James Marsters), who ultimately pursued his loves of both committing violence and writing poetry, achieving some real work-life balance there.

Behind the scenes, “Angel” was famously beset with problems that “Buffy” seemed immune from. Glenn Quinn, who played half demon Doyle in season one, struggled with drug addiction. (He died of an overdose in 2002) and his character was killed off early. ) Charisma Carpenter, who’d been playing Cordelia Chase since the first episode of “Buffy,” found herself in TV purgatory — aka a coma — after a lackluster plotline and real-life pregnancy in Season 4. She too was killed off, with Whedon cryptically alluding at the time to “stuff between us and not stuff that I would talk about in an interview.” Andy Hallett was diagnosed with a heart condition as the series was ending, and spent the last five years of his life in and out of hospitals. And shortly before the start of shooting for the show’s final season, Alexis Denisof was reportedly hit with Bell’s palsy, and his scenes had to be reworked to conceal that one side of his face was temporarily paralyzed.

Those hiccups assuredly led to some confusing, uneven moments on the show, but if you think “Buffy” was flawless I’ve got two words for you: Season 7. In spite of its hiccups though,   “Angel” still looks fresh and weird and genuinely scary 20 years on. And on the strength of individual episodes, it can go toe to toe with anything in the Whedon canon. Sure, “Firefly's" "Ariel.” But also" "Angel's" “Forgiving,” which similarly explored betrayal and the grief that comes in its wake. Sure, “Buffy’s” “Once More with Feeling.” But also: “Angel’s” “Smile Time,” because it had a puppet vampire. And do you remember that "Smile Time" was followed immediately by “A Hole in the World,” and how terrifying and sad and awful it was when Fred (Amy Acker) died?

The classic works of the Whedonverse — “Buffy,” “Angel,” “Firefly” and “Dr. Horrible” (let’s forget “Dollhouse” ever happened) all explored the spectrum of good and evil, corruption and redemption. But “Angel” holds up especially well right now, in an age in which every waking day is a new test of just how much turpitude we can collectively and individually withstand. The characters of “Angel’s” ensemble lived in a world of magic, but what made them so fun was they were simultaneously mired in an entertaining, highly relatable workplace TV show. Angel’s nemesis but sometime ally Lindsey McDonald  (Christian Kane) was a Dwight Schrute from hell, and the sweet, vastly underestimated Lorne (Andy Hallett) was Kenneth Parcell, but green. If you ever wondered what a law firm for actual monsters look like, “Angel” confirmed your suspicions — it looks like every other law firm. And if you likewise ever wondered if an ambitious politician with eyes on the White House and “funding from hostile governments” might secretly be a demon, “Angel” would tell that you’re not wrong there.

Growing up is a finite process. Adulting goes on forever. And in its eminently satisfying final words, “Angel” offered an apocalypse of dragons, hell beasts and upper management, and showed us that there’s only one thing to do when the world’s collapsing. As its titular hero tells his surviving crew, “Let’s go to work.”