On “The Morning Show,” Bradley's bisexuality is ground zero for the “identity politics” debate 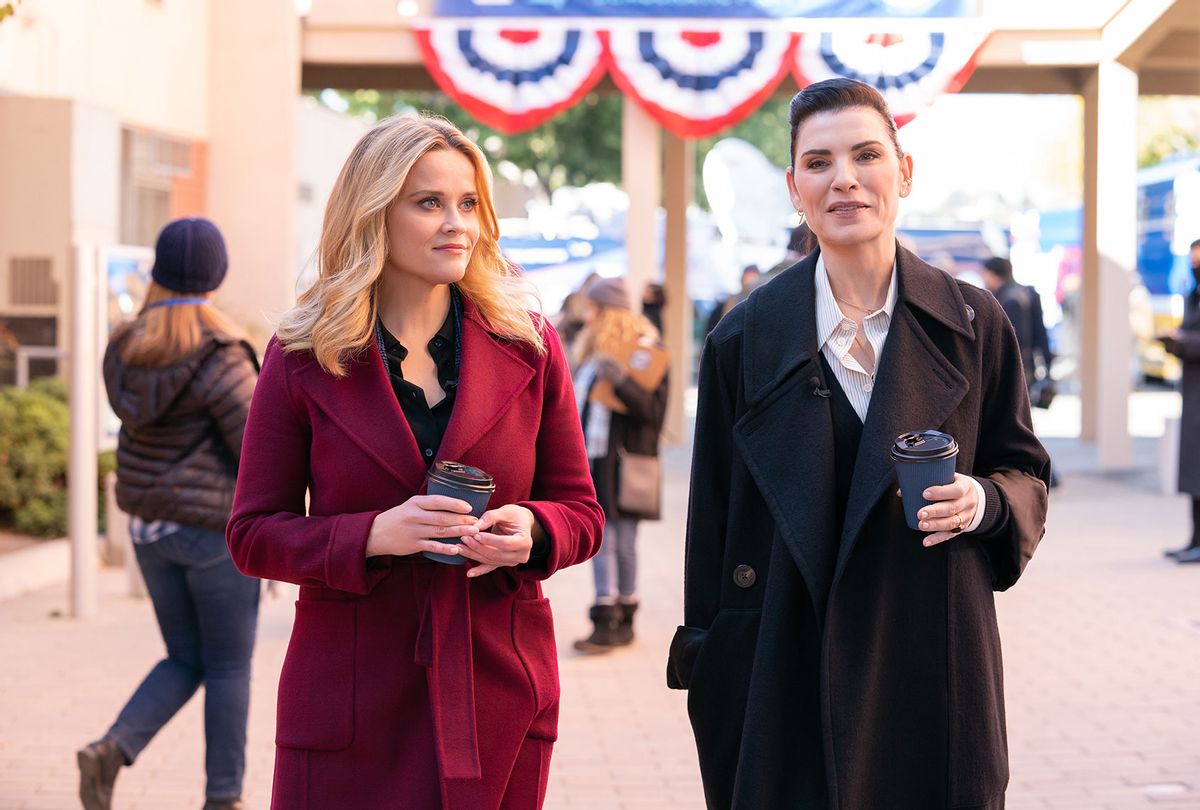 By the end of the most recent episode of "The Morning Show," Bradley (Reese Witherspoon) is so desperate to be a moderator of the upcoming presidential debate that she almost reveals to the network's president, Stella (Greta Lee), something she's only just realized about herself: that she's bisexual.

The almost-confession, an attempt to sell how she would bring the underrepresented, queer perspective to the debate, nearly comes out . . . but doesn't.

"I think I can offer a perspective that Alex doesn't and Eric doesn't, and this is something I barely acknowledge about myself because quite honestly I just don't know how I feel about it, but I want to be truthful," Bradley begins to tell Stella via anxious word vomit, "I'm, I'm from a Southern conservative family."

Stella, of course, is unmoved by this unremarkable confession, but the moment is eye-opening, both for Bradley herself and for audiences. The exchange is the cherry on top of this episode's refreshingly nuanced glimpse into the ways we perceive and wield what's often called "identity politics" in the modern era.

In the previous episode, Bradley realized her feelings and sexual attraction toward Laura Peterson (Julianna Margulies), a fellow UBA journalist who interviews Bradley and is told by UBA CEO Cory Ellison (Billy Crudup) to mentor her. Bradley doesn't initially seem conflicted or ashamed of this budding same-sex relationship, but it's clear that she still doesn't know how to incorporate this newfound aspect of her identity into who she is at work or in any public arena.

Throughout the episode, Bradley is primarily focused on trying to clinch a spot as a debate moderator. She admits that she can understand why there's little chance she'll be chosen to join Alex (Jennifer Aniston) as moderator because, as she tells Laura, "You can't just trot out two straight white women."

What follows is an agonizing conversation between a newly queer woman in 2020, and a slightly older woman, who was outed as a lesbian in the '90s when homophobia was significantly more overt. Back then, being gay nearly ended Laura's career. Now, she argues to Bradley, there are actually major benefits to coming out, and she pushes Bradley to take advantage of rather than conceal her sexual identity.

"There is something inside me that wants to resent you for not being grateful for this," Laura tells her. "I see someone who is walking the same path, honestly a path I helped lay, and it's a little annoying, and I'm envious. I lost a job for being gay. You should embrace it. It's not like you'd be lying."

Bradley responds that she just isn't "interested in using my identity like that." When Laura points out how Bradley wields her background from a Southern, conservative family to her advantage whenever possible and accuses Bradley of being "repressed," the younger woman smashes a vase and storms out in rage.

There are many layers to Bradley's newly discovered, queer sexuality, like the fact that she's in her 40s and is thus exploring her sexual orientation somewhat later in life. Her uncertainty about what to do with this new piece of herself is relatable and familiar to plenty of other people who come out or struggle to come out at an advanced age, and it's an experience that's rarely represented onscreen.

Bradley's discomfort with the idea of coming out may be rooted in any number of reasons, and no one, not even someone who's experienced workplace homophobia firsthand, should pressure her to come out before she's ready. That said, Laura isn't necessarily the bad guy here. She's right about the progress and strides forward that we've made on LGBTQ rights in the last few decades, and the shifts in how we treat marginalized identities in workplaces and politics in general. That doesn't mean we should demean the experiences and struggles of newly out LGBTQ or marginalized people today.

Laura isn't the first woman on this season of "The Morning Show" to scold someone for being ungrateful for the rights they have today. Earlier this season, we're introduced to Paola (Valeria Golino), a feisty Italian woman who shuts down a young feminist as the younger woman confronts Mitch (Steve Carrell), a former "Morning Show" co-host ousted for sexual misconduct, in public. Paola chides the young woman for "whining and throwing tantrums until you don't have to feel uncomfortable anymore," and tells her, "I fought for your right to be an asshole, b***h. Don't make me regret it."

It's a familiar sentiment to anyone who's ever been involved in activism, and had their modern experiences with identity-based oppressions or demands for more progress dismissed by people from their communities who are senior to them. But two things can be simultaneously true: 1) that we've made progress and discrimination and oppression were once worse, and 2) that there's infinitely more progress to be made. Bradley and young queer people, or young women like the one who confronted Mitch, aren't ungrateful to those who came before them — they're just different, have new and different experiences, and want new and different things.

And contrary to Laura's insinuation to Bradley that being openly queer is entirely advantageous today, there may be some benefits for those with marginalized identities that didn't always exist, but they also will always face greater scrutiny. Especially as a journalist, if Bradley came out, she would always have to reckon with the ways her journalistic "objectivity" and credibility are held to a higher standard, because of her supposedly biased, female and now queer identity.

It's often said that the term "identity politics" otherizes all experiences beyond that of the white man's, which is held as the universal default. Those who speak about their lived experiences or marginalized identities remain accused of using "identity politics" for personal advancement — the worst nightmare of a career-driven journalist like Bradley.

When a marginalized person's efforts are rewarded with any sort of prestige or inclusion in spaces of power, they're told they didn't earn it. The unique challenges and barriers they had to overcome due to their identities are dismissed by the idea that it's actually advantageous to be a woman, queer person, or person of color today. And even in the spaces that are supposedly welcoming of marginalized people, when they make any sort of demand for respect, for acknowledgement of their existence or experience, they're often treated as if this basic demand is an impossible inconvenience for others.

At the end of the day, Laura isn't wrong. If Bradley did come forward, on the surface, she would likely be embraced and celebrated by a corporation like UBA that's desperate to present the image of diversity and inclusion after being mired in a sexual harassment scandal. But beneath the surface, and certainly from the massive hordes of bigoted trolls who continue to run the internet, coming out could also stand to harm Bradley and her career in other ways.

Like all queer people who are still in the process of discovering and accepting themselves, Bradley's choice should be entirely her own, rather than a result of external pressure from someone who "paved the way" for her. And whatever she or any privately queer person decides is best for themselves is valid.