"The Morning Show" shifts to cover the pandemic, but still needs a shot in the arm to find its soul

The return of Apple TV+'s series injects even more star power, yet remains indulgently hollow despite its themes 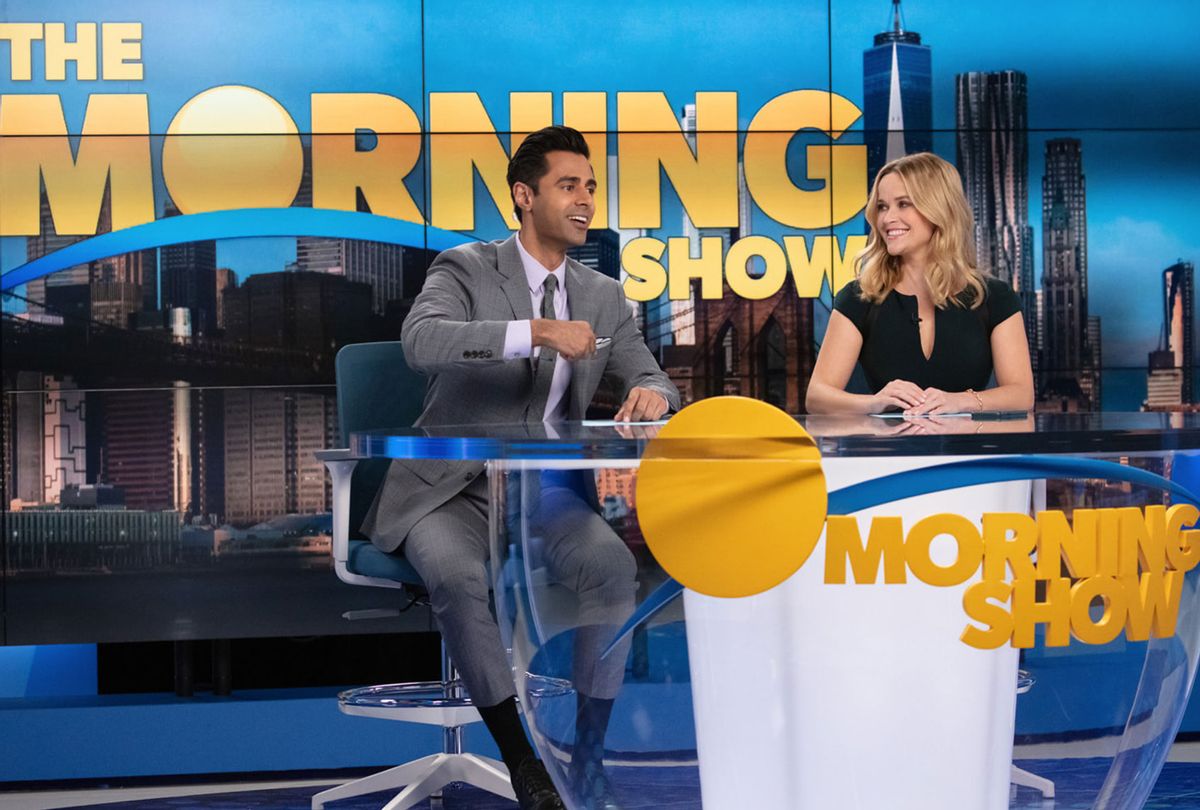 If you enjoyed "The Morning Show" in its first season, why? Seriously, please consider that question and answer honestly. Did you love Jennifer Aniston? Wasn't Reese Witherspoon fantastic? Put them together and . . . wow, right? Better than "Big Little Lies"! Then there's the #MeToo of it all with the usually likable Steve Carell channeling his finest version of a creep in sheep's wool into disgraced news man Mitch Kessler. It's soapy and torrid, but it has a relevant theme.

Now ask yourself: what was the larger point of whatever was happening behind all that celebrity glow and Billy Crudup's vaguely Sorkinian monologues? Not the theme – "The Morning Show," adapted from Brian Stelter's 2013 bestseller "Top of the Morning," announces that as loudly as a Times Square billboard. But the point of it, if there is one, is supposed to illuminate that theme in a way that transcends the plot's basic motions.

Beyond its fictionalized rehashing of Matt Lauer's sexual misconduct and the allegations of management's cover-up of his behavior at the "Today" show, it never definitively lands on one. That makes it a box of truffles that look luxurious but prove hollow once you bite into one.

Still, to some folks chocolate is chocolate, and the combined presence of Aniston and Witherspoon can make any empty calories taste like a five-star dessert.

This show's main saving grace is that people see Aniston as a type, so showrunner Kerry Ehrin writes her star co-anchor Alex Levy in a way that allows the actor to play against type. Aniston is a spokesperson for a skincare brand associated with wholesomeness; Alex is a backstabber.

Witherspoon's Bradley Jackson is a more familiar fit, in that she's a reporter from a conservative Southern family who Alex plucked out of cable news obscurity for entirely self-serving reasons. Through moxie and charm, Bradley bucks the odds to legitimately earn her spot on national TV.  But there is a plain purpose to Bradley's role within her show's ecosystem, in the same way Crudup's driven executive Cory Ellison designates himself as the heart of its network home UBA. Witherspoon's Bradley is the small fry who joins forces with Alex, the bigger fish, to bring down a great white shark. The catch is that once Jaws sinks, so does Bradley's Q score.

Aniston's and Crudup's performances keep the action interesting even when the larger story isn't. And the dialogue really is the thing for Crudup, who inserts the cruel laugh of a master of the universe into tight spaces before he cuts someone off at the knees.

Little of this changes in the second season. Instead, the show serves up more of what was already a lot, setting the action in the year that was far too much for most: 2020.

Tossing in a few more popular actors such as Julianna Margulies amplifies the celebrity magnetism while still neglecting to effectively connect its slew of concepts until the very end of the season. Another common argument in favor of the first season is that it got better in its back half, but it's a shame the writers didn't continue that momentum.

Indeed, the second season's clunky initial developments further expose the show's habit of treating supporting characters like wheeled devices, incorporated to symbolize a moment, represent a certain point of view or cart foreshadowing detail from one episode to another. Few if any of them ever benefit from worthwhile character development.

Before I'd chalk this up to laziness, but now I'd toss some that blame on the very real factor that's still ruining our lives: the pandemic.

Season 2 only spans the earliest days of the slow-moving nightmare, asking us to look backward at a period that seems like another life, and at a New York from another plane of existence. Although it sets us down for the briefest moments right after Alex and Bradley's live broadcast T-boning of UBA's sexist pustule of a network president Fred Micklen (Tom Irwin), it then leaps eight months ahead to the turning of the New Year.

In January 2020 nobody feared COVID-19. The Morning Show, however, receives earliest warning that its arrival is imminent. Nevertheless, no one takes it seriously. Bradley is fussing about her career. Alex abandoned her, retreating to a woodland hideout to write a memoir she hopes will deflate an impending tell-all about the show, and specifically Alex and Mitch, written by her nemesis Maggie Brener (an icy, serpentine Marcia Gay Harden).

In the same way "The Morning Show" doesn't spark without Witherspoon and Aniston near one another, the show within a show isn't working with Bradley apart from Alex. This leads Cory, now UBA's version of Fred, to lure Alex out of her self-imposed exile with a sweetheart deal that brings her scapegoated producer Chip (Mark Duplass) back into the fold.

But it also resumes a version of the status quo that ensures other people like weekend host Daniel Henderson (Desean Terry) probably won't ever get their shot. Bradley and Alex's relationship is back on ice, only now the more seasoned anchor has to worry about Maggie, who circles ever closer, and Margulies' Laura Peterson, who does not harbor warm feelings for Alex.

Meanwhile, as these rivalries ramp up (again) coronavirus rises from a background player to the season's star. "The Morning Show" carelessly jams it along with other defining themes of 2020 into an overstuffed grab bag with "cancellation" written on it, with the purpose of examining how unimportant so much of this scheming is when the specter of mass illness and death suddenly threatens to definitively cancel everything. That reads more coherently than it plays, and rolls out clumsily, starting with placing characters in international locations where the virus hits hardest and earliest.

With Mitch, we get it; he's excused himself to a locale where he can lament his loss of stature in luxury, style and, he presumes, relative anonymity. Another character pops up in Wuhan just as it's shutting down, and it is implied the person has been there for some time with a news crew. Awfully convenient, isn't it? But if the series mentions why UBA sent that person to that exact spot, out of all the places it could be – the point of the assignment, in other words – it doesn't state it plainly enough to bolster an answer that's more explicit than, "Because . . . the pandemic."

The second season similarly mechanizes Margulies' Laura to serve as a way in to examining the UBA workplace culture's enduring subtle bigotry. The difference is that since Margulies has a sizable role in another major character's storyline we get to know her far better than others who have been part of this show since the first episode.

Daniel, for instance, is a gay Black man, making him and Karen Pittman's weary, poker-faced producer Mia Jordan convenient vehicles for the writers to make statements about the pervasive racism and misogynoir dominating the TV news industry. But the show defines Daniel by his frustration and anger, and Mia by her perseverance in the aftermath of Mitch's betrayal, and not much else beyond those depressing factors. Worse, Daniel gets subjected to one of the most unrealistic and cringeworthy TV sequences you may sit through this year.

That beats being one of the many doorstops around the place, which describes just about everyone who isn't one of the main stars.

Still, the actors who made "The Morning Show" worth watching in Season 1 haul it to a place in the second season where it actually shows signs of figuring itself out. Regrettably, and again, that doesn't happen until the eighth episode, easily one of the series' best, and the two that come after it.

Before that the writing pushes the show's indulgent choices to orgiastic extremes.

Some of this works in Crudup's favor, what with Cory's penchant for forced optimistic, enthusiastically bungled metaphors and misinterpreted aphorisms. Cory is wrapped up in launching a streaming service nobody believes in and figuring out how to navigate the network's youthful new president Stella Bak (Greta Lee) who's mostly ticked off at not being taken seriously.

There's a charm in the way Cory lures doubters under his sway with inspirational speeches that are one part Coach Taylor from "Friday Night Lights," one part "Ted Lasso," and two parts steer manure. Sometimes he achieves the perfect balance with this mess, such as when he coaxes Alex back into the "Morning Show" grinder by selling her on the image of being "Venus rising from the ashes." Or when he critiques Stella's empathetic management style while spewing confident noise about circles.

"Let the circle be unbroken," she offers through a tense smirk, making his eyes brighten to a laser hotness. "Exactly!" he hisses through bleached teeth, excited that she seems to get him, and unaware that she's paraphrasing a lyric from a dirge.

Aside from these trappings, the new season makes the curious choices to map out a possible pathway to redemption using Mitch, one of the show's most despicable figures, to do so. Carell's affability makes it possible to pull off. The vileness of what he and the real-life scumbag Mitch is modeled upon did makes this humanizing subplot tough to swallow.  But it also prepares the audience to watch another character's fall from grace and appreciate the comparative care with which that transpires.

"The Morning Show" certainly gets the most bang for the big bucks Apple TV+ paid its stars. But behind those names, the gleaming sets, beautifully cut clothing and chic Manhattan hotel rooms and luxury condos, it remains disappointingly devoid of feeling or intellectual weight. It wants us to be content to marvel at its framework of aspiration and drive, along with loving its two co-stars.  After a point, though, the performances aren't enough of a reason to continue ignoring the story's lack of substance, guts and a soul.

The second season premiere of "The Morning Show" is currently streaming on Apple TV+ with new episodes dropping weekly.