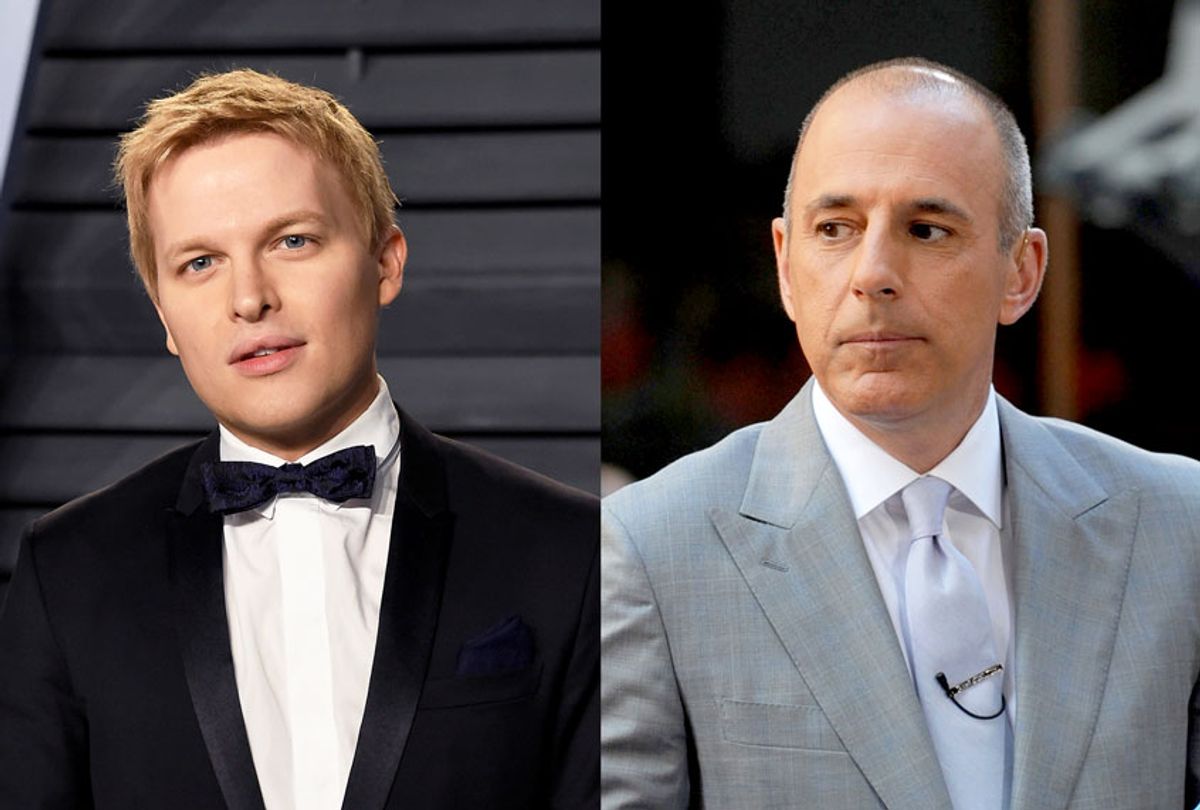 Investigative reporter Ronan Farrow has alleged that NBC made “multiple secret settlements” with women who brought allegations against former anchor Matt Lauer long before his firing.

"What we show in this book, with a paper trail, with documents, was that there were multiple secret settlements and non-disclosures being struck with women at NBC News," Farrow said.

Nevils was identified by Farrow as the employee NBC cited in a statement two years ago when it fired Lauer, which said that an employee filed a complaint about "inappropriate sexual behavior in the workplace.”

NBC News chief Andy Lack claimed in the memo that it was “the first complaint about his behavior in the over twenty years he’s been at NBC News." An NBC spokesperson told CNN “unequivocally” that the network’s management “was never made aware of any complaints about Matt Lauer's conduct” prior to that complaint.

But Farrow told ABC that the network had paid out multiple settlement agreements to Lauer’s accusers in the years leading up to the complaint.

“Over a period of six to seven years, a period in which NBC had previously denied any settlements agreements ... there were seven nondisclosure agreements, multiple ones of those were with Matt Lauer accusers,” Farrow said. “This is years before this incident with Brooke Nevils and the firing.”

Farrow also noted that the initial statement did not describe the allegation in the complaint as a rape.

"We're very careful about laying out exactly what happened and what she said when she went to them," Farrow told ABC. "She unambiguously described a rape or a sexual assault.”

After Variety published the except from Farrow’s book, NBC News issued a statement saying that “Matt Lauer's conduct was appalling, horrific and reprehensible, as we said at the time.”

“That's why he was fired within 24 hours of us first learning of the complaint,” the statement said. “Our hearts break again for our colleague.”

But Lack denied that the network was aware of allegations against Lauer and that it tried to cover them up.

“Any suggestion that we knew prior to that evening or tried to cover up any aspect of Lauer's conduct is absolutely false and offensive,” Lack said in a memo obtained by The Daily Beast.

Farrow previously worked as an anchor and reporter at NBC News. Aside from the Lauer allegations, Farrow told ABC News that NBC shut down his reporting detailing the extensive allegations against disgraced Hollywood mogul Harvey Weinstein, which Farrow later reported for The New Yorker.

“They ordered a hard stop to reporting,” Farrow said. “They told me and a producer working on this that we should not take a single call, they told us to cancel interviews. The question for years has been why, because every journalist at that institution didn't understand why. And I think the book answers that question. This was a company with a lot of secrets.”

Lack denied Farrow’s claims in a memo to NBC employees that was cited by ABC News.

“NBC News assigned the Harvey Weinstein story to Ronan, we completely supported it over many months with resources — both financial and editorial,” Lack said. “After seven months, without one victim or witness on the record, he simply didn’t have a story that met our standard for broadcast nor that of any major news organization. Not willing to accept that standard and not wanting to get beaten by the New York Times, he asked to take his story to an outlet he claimed was ready to publish right away. Reluctantly, we allowed him to go ahead. Fifty-three days later, and five days after the New York Times did indeed break the story, he published an article at the New Yorker that bore little resemblance to the reporting he had while at NBC News.”

Farrow’s book further alleges that Lack himself preyed on young female employees, according to an excerpt obtained by Page Six.

Jane Wallace, who worked as an NBC anchor in the 1980s, told Farrow that Lack was “almost unrelenting” in pursuing a relationship with her. She relented to his advances and began a “consensual” relationship, she said, but it ultimately soured and Lack threatened her career. Wallace “reluctantly” left the network after agreeing to a settlement and a nondisclosure agreement.

Another employee, Jennifer Laird, told Farrow that she had a “hostile” relationship with Lack.

“When Laird asked to be reassigned, Lack wouldn’t allow it,” Farrow wrote. “He compelled her to work longer hours, and on weekends, and proposed she cancel vacations.”