Like Samantha, divorce yourself from the "Sex in the City" sequel, which has aged but hasn't matured 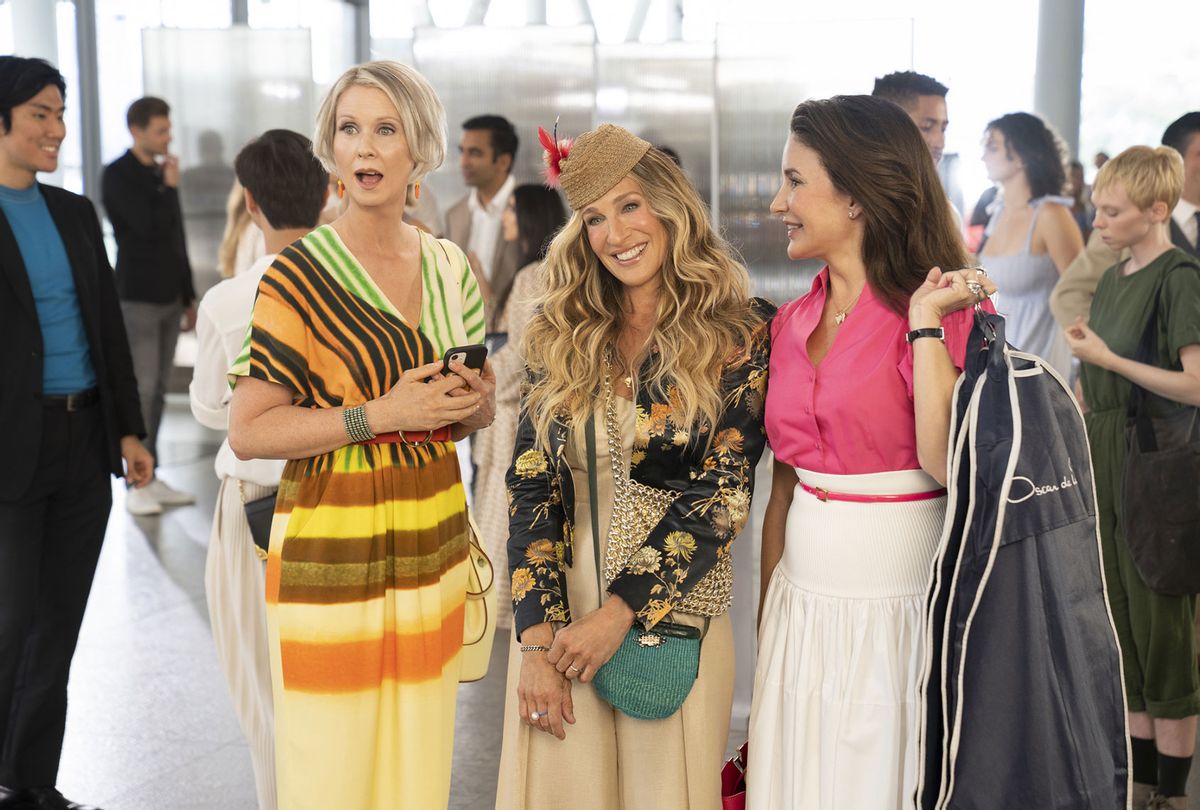 Here's the thing about friendship divorces. The reasons leading up to them are many, and the stories behind those reasons have multiple perspectives. In the same way that history is written by the winners, the party who has the numbers establishes the "official" version of what happened, regardless of how honest that take is.

"And Just Like That . . .  " reminds us of this, somewhat bitterly, as Carrie Bradshaw (Sarah Jessica Parker) reconciles herself with the departure of Samantha Jones (a profoundly missed Kim Cattrall). In real life the acrimony between Parker and Cattrall is intense to a degree that there was no way the "Sex and the City" catalogue could continue with the actor behind Ms. Jones.

But Parker and executive producer Michael Patrick King are savvy enough about the franchise to know they couldn't, say, disappear her under mysterious circumstances. Carrie knows exactly where she is and claims not to entirely understand why Samantha is no longer talking to her. Miranda Hobbes (Cynthia Nixon) and Charlotte Goldenblatt (Kristin Davis) don't exactly bend over backwards to welcome her back into the fold, either.

RELATED: You are no Carrie Bradshaw

Younger "Sex and the City" fans, the ones raised on the foursome's aspirational exploits of what liberated, fashionable success should look like, may find the terse explanation of this falling out implausible. People in their 30s, 40s, 50s and beyond may know better. Nary a friendship is immune to dissolution, and often that tiny slight becomes a breaking point, a full arrest following years of plaque silently building up in the arteries.

But that also creates a problem for "And Just Like That." Despite or because of her flaws and screw-ups, people loved that character – even more than Carrie, in some ways. Samantha's the friend who's the most adventurous, open-minded, and exploratory, and the most likely to call the others on their bull. She created her share of problems in Carrie's life, but solved a lot of others.

Eventually Miranda asks Carrie why they never talk about Samantha. "It is kind of like she's dead," she observes.

Not to us it isn't. And with a few more scenes it becomes abundantly obvious that Samantha had her reasons even if King and the other writers don't intend that to be the case. Watch the remaining trio in action, and it becomes easy to picture Samantha realizing that she had spent decades brunching, clubbing and traveling with a group of unbearable people, and finally deciding life's too short to put up with them a minute longer.

Don't worry about Carrie, Miranda and Charlotte. By all accounts they're living wonderful Samantha-free lives and are all the more boring for it. COVID is over in this version of New York. Carrie and Big (Chris Noth) are merrily married and happily nested in that fabulous apartment. Miranda and Steve (David Eigenberg) have given their teenage son Brady (Niall Cunningham) the freedom to screw his girlfriend all he wants in their home. Perky Charlotte makes nit-picking her hobby, and loves being adored by Harry (Evan Handler) and her girls Lily and Rose.

We reconnect with our ladies over lunch (where else?) where they banter about coloring their grays and technological bewilderment and generally establish that they're in their 50s and nifty and thriving. Carrie drops a reference that she needs to keep up her Instagram as part of the podcast she's on, to which Miranda replies, "Instagram. Podcast. I guess you're passing as younger too!"

Reminder: "Only Murders in the Building" stars a pair of Olds making a podcast with a surly youth and sets much of the action in midtown Manhattan – somewhere right down the street from our ladies. Where in the hell is that New York when you need it?

A wise man once said, "We all judge. That's our hobby. Some people do arts and crafts. We judge." Hence, one should not be blamed for looking askance at the entry of "And Just Like That" into the world. It follows the wreck that was 2010's "Sex and the City 2," and comes before us with a major part of its formula missing.

And while I can appreciate the need to maintain the core of what the audience knows and loves about these women, the world has changed enough since we first met them as to make their lack of evolution stunning. The result is a show that telegraphs its moves and simultaneously benefits and suffers from the fact that we know these characters inside and out. That means "And Just Like That" holds few surprises beyond the usual wallops this time of life serves up in the form of massive loss and, well, hearing loss.

Some characters don't need to change all that much, admittedly. It's wonderful to revisit Mario Cantone's Anthony and see the late Willie Garson's final appearance as Stanford. Their charm lies in their relative immutability; Anthony remains golden-hearted, hilariously cutting and brash, and Stanford is gentle, self-deprecating, honest and supportive as ever. Neither was written with extensive complexity in the first place but regardless, the limited time we get with Garson's beloved Stanford before his untimely death is one of the best parts about this return.

As for the rest of it, King dabs a cosmetic fix on the largest misses in the first go-round, like the lack of any major characters who aren't cisgender white women or gay white men. But he gauchely forces this via relationships that are either contractual or transactional.

Carrie's new job as a podcast co-host places her on a chatter team with a non-binary comic Che Diaz (Sara Ramirez) and a bro played by Bobby Lee. Charlotte finds a Black version of herself on the events planning committee at their children's' school in Lisa Todd Wexley (Nicole Ari Parker).

Miranda returns to graduate school to take a class on policies and principles of humanitarian law and erupts into a geyser of clueless cringe straight out of an HR video on day one of meeting her professor, Dr. Nya Wallace (Karen Pittman).

There's something to appreciate in what King and the writers are trying to accomplish in these introductions and Miranda and Charlotte's anxious awkwardness in the presence of people who aren't them. The very attempt acknowledges that the show idolized a group of privileged white women while erasing the extensive, joyous diversity of New York.

Nevertheless, the script also makes amends in some of the clumsiest, most nightmarish plot developments imaginable. Some of it is intentional, particularly an upcoming episode written by Keli Goff that demonstrates Charlotte's discomfort with being around people of color by advising Harry to cite Black authors in conversations with Lisa, who she's desperate to impress and befriend . . . why, exactly, beyond Lisa's impressiveness and Blackness? It's not entirely clear.

In another Miranda joins the girls in what looks like a white lady culture safari uptown to a queer comedy show. Later she describes the event as being surrounded by "alternative types." We've long passed the point of realizing Miranda is a problematic liberal white woman and it's not surprising in the least that vanilla sex columnist Carrie, in her silver years, has problems saying the word "pussy" to a non-binary person who has one. But . . . ''alternative types"? The woman lives in Brooklyn, not Weehawken.

The entire joke of the show is that these women are ridiculously unaware of how out-of-touch they are even as it uses life's circumstances to let us know that yes, it is entirely aware of the issue but at a loss as to how to own its shortcomings in that department, let alone fix them in ways that seem even partially natural.

When "And Just Like That" drops a shattering twist at the beginning of the season that informs everything that follows, it creates an upheaval one would think would lead to some measure of self-examination.  Not in the four episodes provided for review.

Instead the twist amplifies how Charlotte's cloying adorableness masks her inability to stop making everything about her. Miranda's rut includes a crutch that's all too common on TV series desperate to give a character an escalating problem.

"We can't just stay who we were," Miranda says in a moment of clarity. It's true. Over the decades the first generation of the "Sex and the City" Cosmo-sipping, Blahnik-coveting faithful has awakened to aspects of the show that haven't aged well.

"And Just Like That" could have figured out a way to honor what "SATC" was at its best by saying something inspirational and honest about what a woman gains and loses as she leaving youth behind and steps into a new life phase. The introduction of Sarita Choudhury's real estate agent Seema Patel begins to move in this direction and refreshingly pushes back on Carrie's reflexive tendency to relate happiness to being in a relationship. That's a good thing, because it's part of what Ms. Jones brought to the brunch table beyond her sexual conquests.

Samantha enjoyed being on the edge of culture, always striving to keep up, albeit embarrassingly clumsily in many regards. Her absence is explained by a leap into a huge, wild change, placing the others' creative stagnancy in bold relief.

This enables the writers to render the character as an invisible presence at an occasion where she's acutely missed, a harmonizing grace note within a dissonant sonata. Samantha in absentia provides a gesture reminding Carrie that she knows what to do and what she needs, in a way that's a tender, tasteful and heartfelt. In that moment, we miss her. Everything that comes beforehand and much of what comes after makes a person understand why she cut bait and ran, and appreciate her for refusing to look back. Still, I'd love to see her side of the story someday. It has to be more fascinating than this.

The first two episodes of "And Just Like That" debut Dec. 9 on HBO Max. The remaining eight episodes premiere weekly on Thursdays. Watch a trailer for the series below, via YouTube.