"Emily in Paris" is aging well

Forget "And Just Like That." For a nuanced performance of a powerful, aging woman, watch Sylvie in "Emily in Paris" 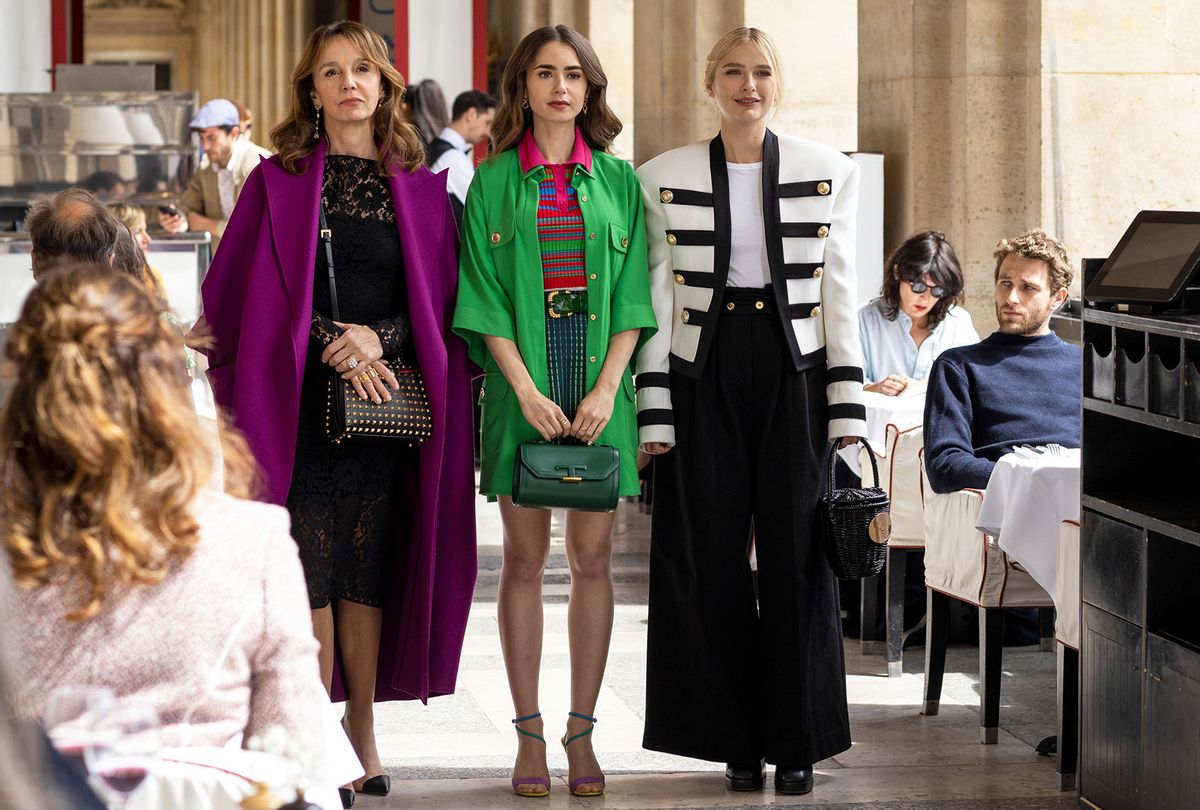 The second season of Netflix's "Emily in Paris" has an episode with an exercise bike. But unlike "And Just Like That," the HBO Max "Sex and the City" reboot that kills off recurring character Mr. Big (Chris Noth) in its initial episode, after a cigar and some ill-fated exercise, no one dies on this ride.

Much of "Emily in Paris," at least initially, pokes fun at the differences between American and French culture, as the titular character, a young marketing employee from Chicago (Lily Collins) who doesn't speak the language and apparently eats well-done steaks, is sent to Paris for work. She's a last-minute replacement for her boss (Kate Walsh) who, upon finding herself unexpectedly pregnant, simply cannot go to France as planned.

As a person who gave birth in America with its dismal infant mortality and postpartum care rates and lack of paid family leave, I can think of worst countries to be in while pregnant than France. But that's beside the point.

It's a flimsy construct, and the first season of the Darren Star show faltered, as insubstantial as some of the outfits Emily wears, its dialogue as awkward as her bucket hats. But in the second season, Emily — still in Paris! the internet marveled — gets better at speaking the language, and surprisingly, the show gets better too. That's largely due to the supporting cast, especially Emily's boss, Sylvie (Philippine Leroy-Beaulieu).

RELATED: "Emily in Paris" brings all the ugly American tropes to the dining table

Emily, unlike the world-weary Carrie Bradshaw, is an ingenue, wandering around (only select neighborhoods of) Paris wide-eyed and in heels, making blunders and facing no real consequences for her many mistakes; she is a conventionally attractive young white girl, after all. Fortunately, she has at least one area where she actually excels — and that's work.

Weirdly compelling in the first season of "Emily in Paris" were its fictional agency's marketing campaigns. Emily's dreamed-up stunts included making a virtual poll asking if a client's nude ad was sexy or sexist, pairing a signature scent with a luxury hotel, and rebranding a bumper crop of champagne as something to shake up and "spray" in celebration, not to drink: a sort of Zhampange for the French set.

As someone who both receives daily pitches from publicists and has had to participate in the marketing of my books, it's nice to see this side of the business, work that feels at least slightly more plausible than say, the publishing world of "Younger."

"Emily in Paris" is centered around work while "Sex and the City" . . . well, it was always centered around drinking: going to this club or fancy restaurant or that party or mimosa brunch. There is certainly that element in "Emily in Paris" — one of the love interests, Gabriel (Lucas Bravo), is a chef, and a lot of Emily's business involves client dinners and launch parties — but work always seemed like a side note in "Sex and the City." It's virtually non-existent in "And Just Like That," because of the characters' wealth.

Miranda has the financial security to simply quit her unfulfilling, high-paying job. Charlotte doesn't work. Carrie, along with an inheritance from Mr. doomed money bags Big, has . . . a podcast? Which pays well?

Meanwhile, Emily goes to work every day in an un-airconditioned office, where co-workers drop by her open floor plan desk, and boss Sylvie has an "no food at work" rule. Unless Sylvie has allegedly had sex the night before, in which case she unceremoniously drops a bag of pastries off for her employees.

The treatment of older women in "Emily in Paris" marks one clear way the Netflix show pulls ahead of "And Just Like That." The women of HBO Max seem surprised to find themselves the age they are. Charlotte talks about Miranda's fully gray hair as though it just happened overnight. The three women all act as confused about this modern land with its pronouns and its privilege as Dorothy coming out of her ruined, black and white house into a world of color and munchkins.

Their seeming inability to understand the world they've been presumably living in all this time, "reduces the original characters to a baffled trio," according to The Guardian. The women all behave much older than they are, feigning technological ignorance incongruous with characters only supposed to be in their 50s.

And while "Sex and the City" clothes were always flamboyant, in "And Just Like That" they look desperate, not in pace with what women of substantiable means would wear. Costume designers for the show said they "didn't think about age at all." But maybe they should have. "Just because it's expensive doesn't mean it's luxury," as Sylvie says.

Leroy-Beaulieu, who is 58, wears a bikini in "Emily in Paris," coming out of the sea like Venus, or Phoebe Cates in "Fast Times at Ridgemont High." The sight stuns Emily, a beat long enough to give the viewer pause; it certainly wouldn't be Emily's worst romantic choice.

But, like all of the French actors in the show who both act better and look better than the Americans in every scene, Sylvie captures attention whether in an evening dress with a gold arm band or high-necked sweater dress. Compared to Emily in her clownish outfits (and the general buffoonery of the women Sylvie's age in "And Just Like That"), Sylvie looks radiant and acts like an understated queen.

She slips from French to English to Italian as effortlessly as flicking a long white shawl over her shoulder. She's married, though only on paper (still, she makes out with her estranged husband sometimes). She's been the mistress of a perhaps older, definitely married man, and now she's the girlfriend of a younger, unmarried, and devoted one. She's the head of Emily's marketing firm, and is soon to run her own business. But she's not the French Samantha Jones; Sylvie is more competent than the bumbling women of "And Just Like That," even the one who got away.

She also doesn't have the coldness of Miranda Priestly (Meryl Streep) in "The Devil Wears Prada," although she has been set up as a kind of designer dress villain boss. Sylvie has too much heart for that, and she's also a better supervisor, which becomes clear when Walsh's Madeline finally makes it to Paris and micromanages her way into mess after mess. People matter to Sylvie, even Emily. Warmth radiates from Leroy-Beaulieu's eyes, and when she does dismiss or correct Emily, it's fleeting and perfunctory. She also keeps on saving her.

Sylvie is the fixer, quietly capable, devoted to her staff — to whom she keeps stressing work/life balance and reminding not to work on the weekend — and more maternal than Miranda or Charlotte, who actually have kids. She cares. She cares a lot, and though Emily's name is on the title, Leroy-Beaulieu's Sylvie is the reason to watch.

And that exercise bike? It's called Pelotech; perhaps "Emily in Paris" could not get the sweet, misguided approval of Peloton that "And Just Like That" received. It's the subject of an episode late in the second season, when an American fitness company tries a Paris launch. None of the French marketing employees will have it, however — "Why would anyone want this when you can ride outside?" wonders employee Luc (the lovable Bruno Guoery) — and the sample bike disappears from the office . . .

. . . only to reappear in Sylvie's light-filled apartment, where we see her ride it, making sweatpants elegant, as a cat runs by.

We see Sylvie in her apartment again, alone in her bathrobe, when her ex-lover (the still married one) calls and describes her current relationship with a younger man as "silly."

"I could give a flying f**k about how silly I look to you," Sylvie says. She bends to the floor to feed her cat, straightens. The camera spends a few moments on her face as she stands there, thinking, making up her mind to join her lover at a lunch with his friends, a lunch she had refused to attend earlier, worried what the younger friends would think of her.

It's a quiet, frankly lovely moment of still reflection, and a rare glimpse into the inner life of a female character who is not 25, reminding me a bit of Diane Lane in the 2002 film "Unfaithful."

But "Emily in Paris" is aspirational, the kind of hopeful stuff that sent a flock of "Sex and the City" fans, for better or worse, into New York City in the 2000s to look for publicity and media jobs that maybe didn't exist and to bankroll Magnolia cupcakes. Season 2 of "Emily in Paris" doesn't make me want to actually go to Paris. But it makes me look forward to growing older — or at least, not to fear it as much as the scare-mongering caricature of women of a certain age that is "And Just Like That."