I like to think of the show's protagonist, Poppy Li, as a sort of anti-Emily Cooper of "Emily in Paris" 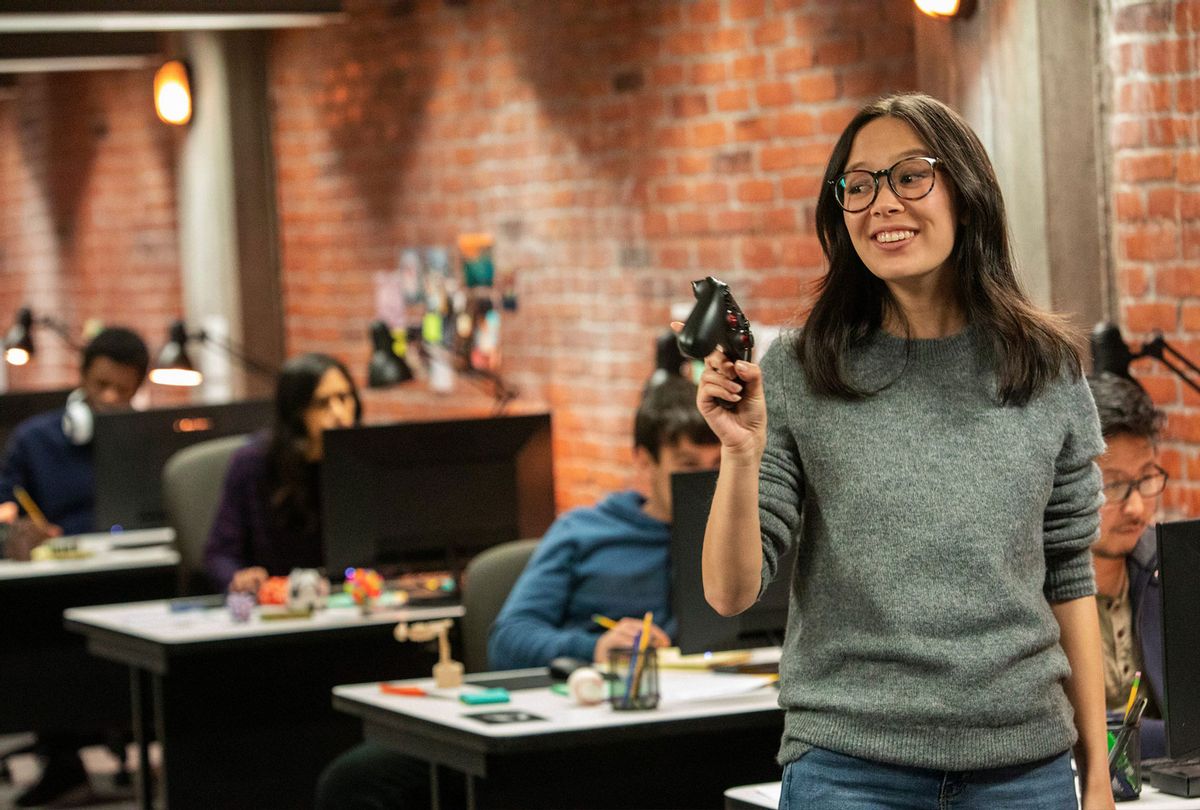 Nobody is going to look at Poppy Li (Charlotte Nicdao), one of the protagonists of the Apple TV+ series "Mythic Quest," and immediately think "girl boss."

The lead engineer, and eventual co-creative director, of the titular massively multiplayer online game is the type of woman who, as her coworkers put it, wears cosplay to a decidedly non-cosplay professional event.

She's the type of woman whose entire neck, when she gets stressed, becomes a constellation of hives. She is her most comfortable in a schlubby purple hoodie, stationed behind her computer. And, through her, the writers of "Mythic Quest" are challenging cultural stereotypes about the kinds of women who get to get ahead in business

When we're introduced to Poppy, she's been at MQ Headquarters for about eight years after being plucked from MIT at the age of 19 by Ian Grimm (Rob McElhenney), her narcissistic, micromanaging — though creatively brilliant and not-so-secretly insecure — boss who originally masterminded the game. After all that time, Poppy is eager to have something that feels like hers in the massive online world of the game, and she thinks she's finally hit on a winner.

And while she is personally really amped about arming players with the ability to dig, the reveal is understandably . . . anticlimactic. That is, until Ian gets his hands on the code for said shovel and starts envisioning it as a new weapon to be featured in the game's much-anticipated expansion — something that he doesn't have the technical skill to execute without Poppy's coding chops.

This marks the first big point of tension between Ian and Poppy. She's ready for him to recognize her as a creative equal; he's happy using her to serve as the "paintbrush" of his personal creative vision. From there, it's a season-long climb towards what eventually becomes a joint partnership between the two, but what's so refreshing about that narrative journey is that Poppy is far from perfect.

In fact, she is deeply — and likely to many, relatably — awkward,  and not in that cool-girl faux, "Oh, I'm so awkward!" kind of way. Poppy is deeply passionate about her work, but doesn't strike me as the kind of woman who has read "Lean In" by Sheryl Sandberg. She loses her temper more than occasionally, struggles with some of the "softer" social skills expected of women in the workplace and vacillates between having an ego the size of Ian's and crippling imposter syndrome.

Put another way, I like to think of Poppy as the anti-Emily Cooper (Lilly Collins) of Netflix's "Emily in Paris."

Remember, if you will, the third episode of that series in which Emily, a plucky American workaholic, presents her Parisian colleagues with what she has dubbed "Corporate Commandments. She does this, I might add, while wearing a red beret, which is the cringe-cherry to top this uncomfortable sundae of a situation.

Luc, her co-worker, reads the document to the office: "Thou shalt always maintain a positive attitude. Thou shalt always be on time. Thou shalt praise in public and criticise in private." Emily responds to her understandably disgruntled colleagues. "It's about all of us sharing a global vision," she says while flashing a nonplussed smile.

Emily seems to run on corporate jargon and pithy (at least to her) Instagram hashtags — and she's ultimately rewarded for that. Throughout the series, she succeeds by presenting as the most superficial kind of "girl boss," a term largely credited to Sophia Amoruso, the founder of the online clothing retailer Nasty Gal.

In the short-lived Netflix series about her life, fittingly titled "Girlboss," Amoruso (played by Britt Robertson) delivers a monologue that serves as the underpinning for the philosophy: "Girls are collaborative, empathetic, hard workers. Girls are great."

It's about as feminist as a t-shirt that says, "Hustle for the pretty things." Or about as feminist as one of Emily's narrative arcs in which she scores a big professional win by tweeting about how the French word for "vagina" uses the masculine definite article and somehow subsequently lauded by Brigitte Macron for her bold views on sexism in French culture.

The thing is, for all her "ugly American'' bumbling in Paris, Emily is still a thin, conventionally pretty, white woman attempting to make it in corporate communications for luxury brands. Society gives her space to fail up. Meanwhile, Poppy is a Filipino-Austrialian woman in gaming and game design, a field that is still largely male-dominated.

Her idea of "empowerment" doesn't fit on a motivational poster. She's a workaholic, bolstered by cheap candy and spite. It's rarely pretty, but her vulnerability is both an undoing and an asset as she recognizes and gives voice to the talent of the other women with whom she works, like tester-turned-streamer Dana (Imani Hakim). The new season of "Mythic Quest," which premiered on May 7, shows her navigating her new role as a supervisor, and it's not one that she takes to naturally.

Where Ian knows how to give speeches that set a room on fire — or, as his ex-wife put it, "shine his light" on people, even if disingenuously — Poppy struggles to get the dev team excited about making necessary items in the game like bricks and caulk.

When she's recruited to give a speech at a Women in Gaming luncheon, she shows up in a flashy dress that Ian picked, armed with a clutch full of candy wrappers.

"Sorry — I suck at this," she says at the opening of her speech. "I'm not an alpha. I don't give people goosebumps and I'm not always smiling. And sometimes I cry at work for no reason other than I think about crying."

She continues: "I'm not tall or a runway model. Look, I can't promise that I'm always going to live up to a standard of other people's expectations [but] I'm going to do everything I can to be the best boss I can be. Why? Because f**k everyone else."

The crowd takes a beat and bursts into applause. They loved her, and when Ian and his wishy-washy executive producer David (David Hornsby) consult each other, they realize that Poppy actually inspired them to get what she wanted by "leaning in" in her own way. David had promised Poppy a new dev team if the speech went well; master manipulator Ian wrote the speech, scripted flubs and all, for her knowing that people would love the genuine her.

She played them against each other and came out on top. As Ian put it, "That little mess of a human being is a boss," and it's a refreshing change of pace in a culture saturated in empty #girlboss propaganda.

Season 2 of "Mythic Quest" is now streaming on Apple TV+. New episodes are released every Friday.