When the show is assessed through the lens of its food, a bitterness towards non-American culture is revealed 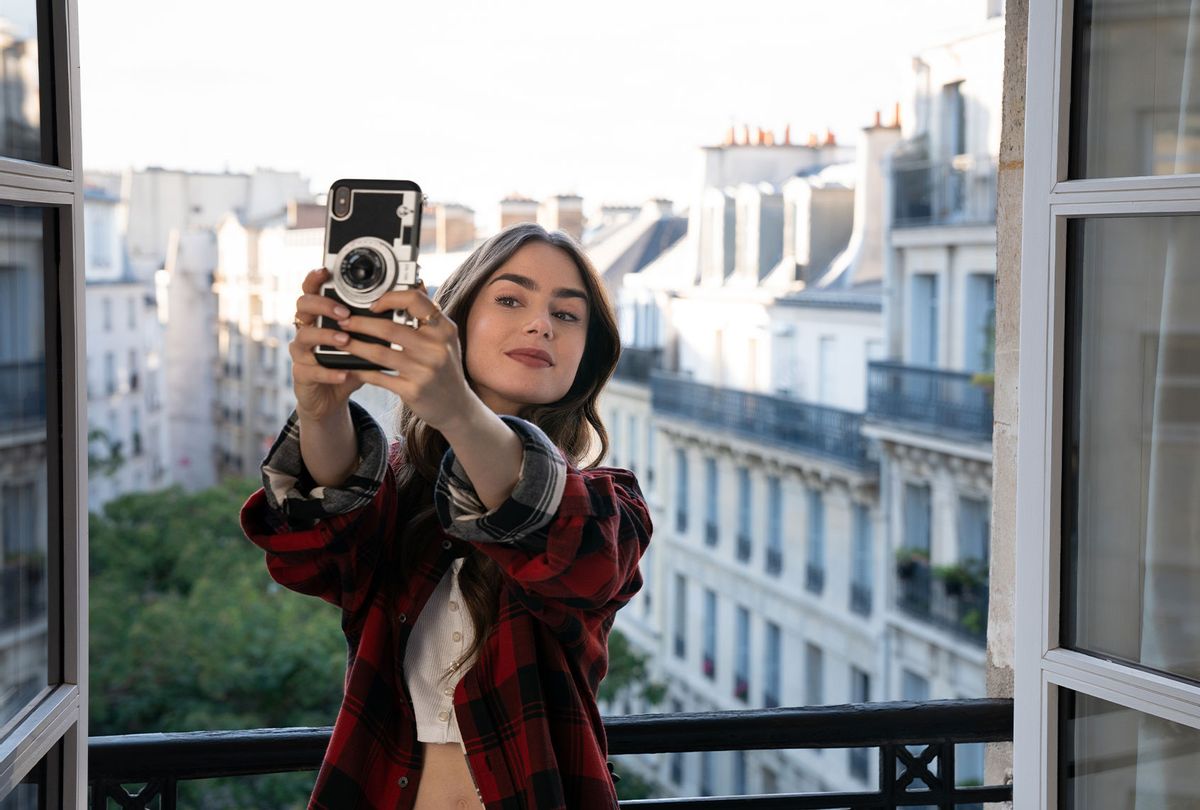 Lily Collins as Emily in "Emily In Paris" (STEPHANIE BRANCHU/NETFLIX)
--

In the third episode of the new Netflix series "Emily in Paris," Emily (played by Lily Collins) FaceTimes her American boss, Madeline (Kate Walsh), as she jogs along the Seine. It's 1 a.m. in Chicago and Madeline can't sleep. "You're living my life" she muses, patting her stomach.

Madeline, a marketing executive, was originally supposed to relocate to France, but after she discovers she's pregnant, passes the opportunity to Emily instead.

Emily turns the camera away from her and pans it across the river. It's stunning. There's a boulangerie in the distance and — one scene later — Emily will don stripes and a red beret. It's the kind of fantastical Parisian experience that doesn't really exist, but viewers will nonetheless recognize from films like "An American in Paris," "Sabrina" and (as Emily describes to her American soon-to-be ex-boyfriend) "Ratatouille."

"Your life is croissants and sex!" Madeline exclaims — and honestly, amid a pandemic that has sucked the joy out of so much of life, there are worse premises for a show. I'd love to be vicariously romanced and fed flaky pastries; that's the appeal inherent to films like "Always Be My Maybe," "No Reservations" or even "Tortilla Soup." I'll hardly ever turn down a food-centered rom-com, even the undeniably saccharine ones.

But there's a distinct bitterness at the core of "Emily in Paris," especially when the show is viewed through the lens of its food.

Food isn't necessarily a central theme in the show. Much of the narrative is driven by Emily's unrelenting workaholism, and the fish-out-of-water foibles it causes, when she arrives in Paris. She loves work! It makes her happy! She relishes in being a cog in the machine, armed with laughably bad Instagram captions and an enviable shoe collection! Which is all fine until she delivers a printed packet of "workplace commandments" to her coworkers.

There's nothing particularly objectionable in the handout (think corporate truisms like "praise in public and criticize in private") but the message to her coworkers is clear. She wants to strip them of the habits she finds objectionable — the smoking, the long lunches, the chilly demeanors, the healthy sense of work-life balance. Essentially, she wants to strip them of their Frenchness.

Keep in mind, she's been off the plane for like 48 hours and the Rosetta Stone lessons she says she crammed on the plane didn't stick. Her French boss, Sylvie (Philippine Leroy-Beaulieu), eventually calls her on it.

"You come to Paris, you walk into my office, you don't even bother to learn the language," she says.  "You treat the city like your amusement park and after a year of food, sex, wine— and maybe some culture, you'll go back from where you came."

To be clear, Emily isn't necessarily hateable. She's just the kind of character whose willful ignorance and bewildering sense of American exceptionalism makes you physically cringe more than is comfortable in a 30-minute timespan. This is on full display during a steak dinner in the second episode.

Emily is meeting up with her new friend, Mindy (Ashley Park), a Chinese-Korean woman who studied in the States and is now a nanny for two French children. They stroll into a cute little brasserie, where Emily orders her steak cooked to medium; it arrives at the table medium rare because that is how the chef believes it should be cooked. She literally shouts across the crowded restaurant to get the waiter's attention and asks that it be returned to the kitchen. "In America," she says to Mindy, "the customer is always right."

But, behold, the steak arrives back at the table — untouched by the chef, who turns out to be her ridiculously hot neighbor, Gabriel (Lucas Bravo). He says he's happy to burn the steak for her, as long as she tries it the proper way first. She does and agrees that it actually is perfect. "Surprisingly tender," she says between bites. 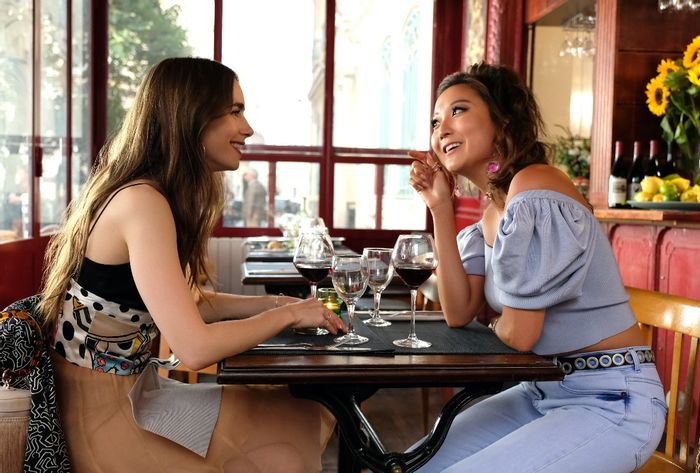 It's maybe a five minute scene, but there's so much full-body cringe to be experienced (the idea that she was going to change French culture by returning a piece of meat!) and it's not just centered on Emily. Before the steaks arrive, Mindy trots out an exceptionally lazy joke about how she thought that ris de veau was "brains or balls, but it tastes like a**." Ris de veau, by the way, are none of these things; they're sweetbreads, the thymus of a calf or lamb, and if prepared correctly are pretty mild and creamy.

In the larger scheme of the show, the comment doesn't matter. It's treated as the offhand joke it is, never to be revisited. There's no late-in-season revelation where Emily and Mindy try a mystery dish which is revealed to be sweetbreads and they toss their hands in front of their mouths in shock after realizing that they do, in fact, like thymus.

But it's an especially odd comment from one of the only non-white members of the cast, whose family is supposedly from Shanghai. Eating offal isn't uncommon in most countries, but organ meat is  prepared often in Chinese cooking. The line just doesn't ring true — but that's not super surprising given that Darren Star of "Younger" and "Sex and the City" fame is behind "Emily in Paris."

A lot has been written about Star's casual dismissal of non-American cultures. A moment that specifically stands out to me is from the first "Sex and the City" movie when Charlotte refuses to eat anything other than chocolate pudding cups on the girls' trip to Mexico because she is terrified the "foreign food" will make her sick. She ends up accidentally drinking shower water and getting violently ill anyway.

That said, Star has never professed to make television that mimics or deeply engages with reality — and when he does, the results are mixed. For example, when one of Emily's French bosses mentions that he's had deep-dish pizza and that it takes "like a quiche made from cement," Emily quickly responds, ""You must have eaten at Lou Malnati's."

For the uninitiated, Lou Malnati's is a Chicago institution that has been serving deep dish pizzas since the 1970s. I grew up eating it and have actually had a pie shipped to me as a treat during the pandemic. Is it the best deep dish pizza around? Maybe not, but to many — me included — the local chain tastes like home.

It could be argued that the joke was tasteless as so many restaurants are attempting to stay afloat during pandemic closures, and garnered enough attention that it prompted a response from the pizzeria.

"When Netflix's 'Emily in Paris' writers chose to take a shot at Chicagoans and our pizza to try to get a laugh, it felt heartless and not humorous in the midst of COVID-19," owner Marc Malnati said in a release.

But that's the thing about Star's shows. They are blissfully devoid of any real class struggles, racial tensions or politics (save the "Sex and the City" episode where Samantha runs into Donald Trump at a bar). It's the pop culture equivalent of the Starbucks Pink Drink — colorful, frothy and artificial.

However, "Emily in Paris" is not unwatchable. You just can't watch too closely. For every moment that Emily shows her most Ugly American ethnocentrism, there are at least two pairs of beautiful shoes and a breathtaking vista. Fashion and romance – two rather cliched aspects of French life that is deemed acceptable to Emily the American.

And therefore it's unsurprising that the one French food she immediately embraces is similarly obvious and well, basic (as another character deems her). As she bites into her first pain au chocolat, Emily summarizes the experience on social media with a quick caption: butter + chocolate = heart emoji. But the look of orgasmic pleasure on her face speaks louder than any Instagram post could.

In the end, that's what people want out of an aspirational television program. Give us a little bread with the circus.

"Emily in Paris" is now streaming on Netflix.

CORRECTION: An earlier version of this article attributed in error a "Sex & the City" scene to the character Miranda instead of Charlotte. The story has been updated.