From Britney Spears to Lindsay Lohan, starlets reclaiming their lives is my favorite 2021 trend

Set on fire by the magnifying glass of the tabloids, these stars from my childhood make up for lost time 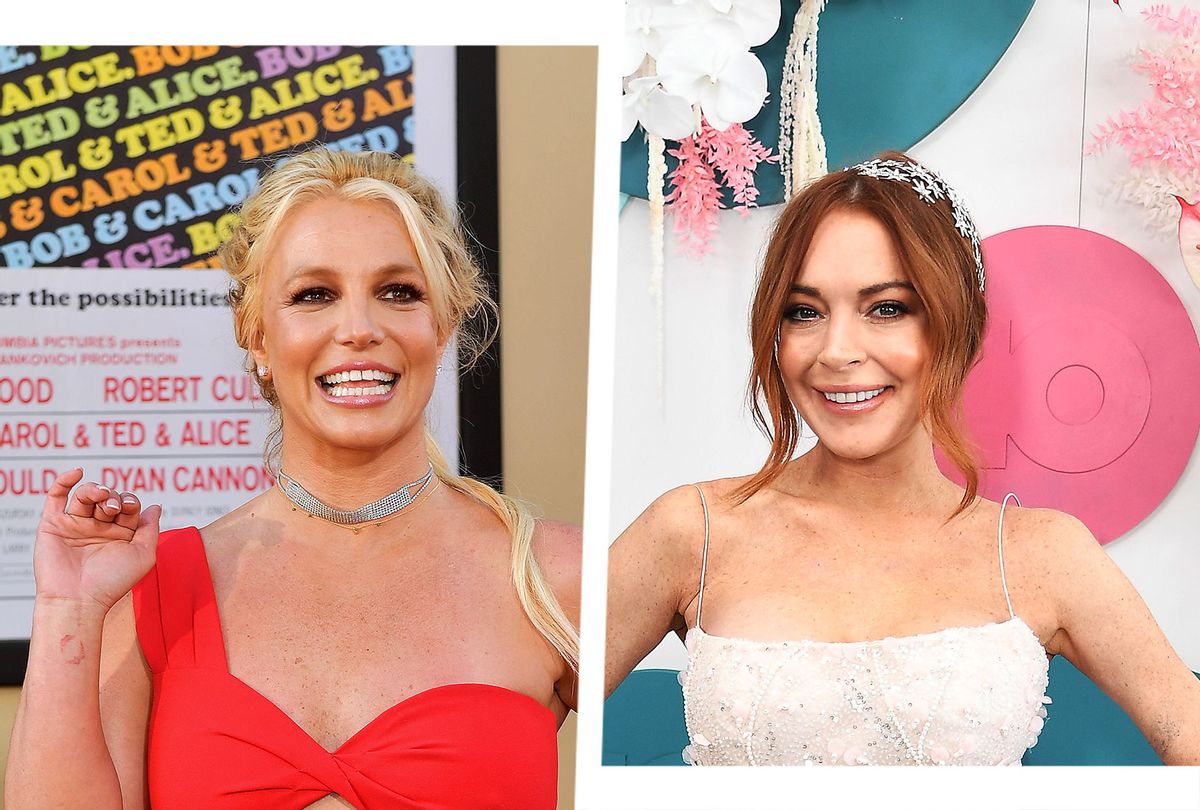 In November, Britney Spears was officially freed from the nearly 14-year conservatorship controlled by her father Jamie Spears when a judge with the Los Angeles Superior Court terminated the arrangement. The conservatorship had given Jamie Spears authority over his adult daughter's career, finances, and virtually all decisions in her life, including forcibly putting her on birth control and forbidding her from re-marrying.

The elder Spears had begun the conservatorship in 2008, claiming Spears' mental health struggles at the time warranted the then-temporary guardianship.

But in the years since, Spears has seen her two sons more (after losing custody to ex-husband Kevin Federline before the conservatorship, an arrangement that reverted to 30% unsupervised custodial rights for Spears). Any mental health diagnosis has not been made public — some have theorized Spears was dealing with untreated postpartum depression — but Spears' conservatorship was terminated without a mental health screening, an unusual circumstance that would likely only happen, according to disability rights lawyer Zoe Brennan-Kohn: "If everyone in the picture thinks this person does not need to be in this invasive situation."

And in the month since the conservatorship was ended, Spears has posted on her social media more: smiling and often dancing. Newly engaged to her partner of more than four years, actor and fitness trainer Sam Asghari, the two spent Christmas together. Spears had put up a Christmas tree early, in October, an advance celebration in hopeful anticipation of her freedom.

Spears, who turned 40 in December, is not the only female celebrity, maligned and misunderstood in the early 2000s, now back in the spotlight for positive and healthy reasons. Starlets from my childhood are having a good year. They are finally having a year under their own control, to tell their own stories, an ownership that was denied to them in their youth.

This November, 35-year-old Lindsay Lohan announced her engagement to financer Bader Shammas after dating for several years. Lohan was a child model at the age of three, and teen star of movies "Mean Girls" and a remake of "The Parent Trap."

The bubbly redhead who had charmed audiences in family-friendly films like "Herbie: Fully Loaded" and "Freaky Friday" started to attend Alcoholic Anonymous meetings at age 21 while also being a nightly fixture on the club scene. In and out of rehab over the years, some court-ordered, including a stay at the Betty Ford Center, she faced DUI charges, and charges of reckless driving, driving under a suspended license, and drug possession, but served only days in jail.

In a 2013 interview with Oprah, Lohan described herself, when pressed, as an "addict," admitting that she did cocaine in order to drink more.

Lohan has mostly stayed out of the spotlight recently, abroad in Dubai, where she has lived for the past seven years (and where she met Shammas). Stable relationships are not the only marker of success, of course, and after appearing in some more serious, low-budget films and some live theater performances (British publication The Stage wrote that she was "out of her league" in David Mamet's "Speed-the-Plow"), Lohan has a big movie planned in 2022.

The Christmas movie, co-starring "Glee" alum Chord Overstreet, is so far untitled, but that didn't stop it from taking attention away from 2021 holiday films. Forget this year. Give us 2022 Lohan with her hair long and red, and her smile wide, standing in a plaid scarf next to a romantic lead in some fake snow in a fake small town, please.

Start the sentence "Whatever happened to . . .?" and you can fill in the blank with any number of names of young women from the 2000s, singers and actors. Women who are back now, older, and a heck of a lot wiser about their careers, their personal lives, and the media which laid them bare.

Avril Lavigne, the singer-songwriter criticized as a young teen for calling herself punk and for co-writing her songs with older, more established songwriters, has a new tour in the works. The 37-year-old announced she's working on a film adaptation of "Sk8ter Boi," her hit song from her 2002 debut album, about to celebrate its 20th birthday.

Jessica Simpson celebrated four years of being sober in November. The singer posted an older photo of herself on Instagram, taken before she made the decision to stop drinking, and wrote about the person she was back then: "I didn't love myself. I didn't respect my own power. Today I do. I have made nice with the fears and I have accepted the parts of my life that are just sad. I own my personal power." The 41-year-old published a memoir "Open Book," which described her drinking and drug abuse, in 2020.

Even Tara Reid, a favorite target of critical press in the 2000s for her alleged hard-partying, has had a bit of a comeback, thanks to appearing in the cult hit series "Sharknado."

All these women were thrust onstage young, as children pushed on by their parents, many of whom had their own struggles with addiction (in a hearing about her conservatorship, Spears said she was afraid of her father).

All had easy and early access to drugs and alcohol. Lohan said she started using drugs before she could legally drink. Many women who became our favorite teen stars survived physical and sexual abuse. Many married young. Simpson married Nick Lachey at 22. Lavigne first married at 21. Spears had two children before the age of 25.

Magazines were not kind to girls growing up publicly in the 2000s. Most made a ton of money off them.

In a 2014 interview with Time, Reid said she felt "like a cartoon. Because that's what sells. Let's write a bad story about Tara. Let's show her drunk. Let's show a party girl. Let's show the worst situations."

As Sophie Gilbert wrote in The Atlantic: "The early days of the internet collided with nonstop cable-news coverage and submerged us into a peculiarly banal kind of drama: Spears buying snacks at a gas station, swarmed by photographers waiting for her to cry, or yell, or do something that affirmed the public perception of her as unworthy."

Simpson was mocked for her breast size, and labeled "a dumb blond" repeatedly for her antics on the reality show she starred on with her now ex-husband, Lachey. Diagnosed with Lyme disease at age 30, after years of dealing with an unknown illness, many speculated that Lavigne simply had an eating disorder.

"Everyone's talking about it," an interviewer said to Spears on TV. "Your breasts."

That's a scene from the New York Times/FX documentary "Framing Britney Spears," which aired in 2021, and may be, along with other documentaries about Spears, at least part of the reason for the renaissance in these women's lives, and for the reckoning media needs to do about what was done to them as children.

That interview when Spears is asked by a middle-aged man to talk about breasts occurred when she was 17. Brooke Shields was 15 when Barbara Walters asked for her measurements in a television interview that Shields has since criticized as inappropriate. So far, Walters has not apologized. Neither did the interviewer of Spears (though he did a lot of defensive backpedaling).

The end of Spears' conservatorship marks the start of the rest of her life, a life not controlled by men. It has drawn attention both to conservatorship in general, a practice some consider ableist (Amanda Bynes, singer and star of "What a Girl Wants" and "She's the Man" is currently under a conservatorship managed by her parents), as well as to the years many young women of the 2000s like Spears were set on fire by the magnifying glass of the tabloids.

In some regards, their childhood was taken, paparazzi shot by paparazzi shot, bad joke by bad joke. Certainly, control of their own narrative was. And while no one can get that back, Spears, Simpson, Lohan, and Lavigne are making up for lost time.

Maybe Bynes (whose conservatorship has not received nearly as much attention as Spears'), Reid, and other women will too, as they approach middle age in the frustrating position of knowing you were wronged as a young girl, but not having enough power to do much about it, to recoup what was taken, or finally and fully to actualize.

"I was the first one," Reid, who began acting when she was 6-years-old, said in the Time interview. "I was before Paris Hilton, before Lindsay Lohan. I'm the oldest one — and I started selling their magazines."