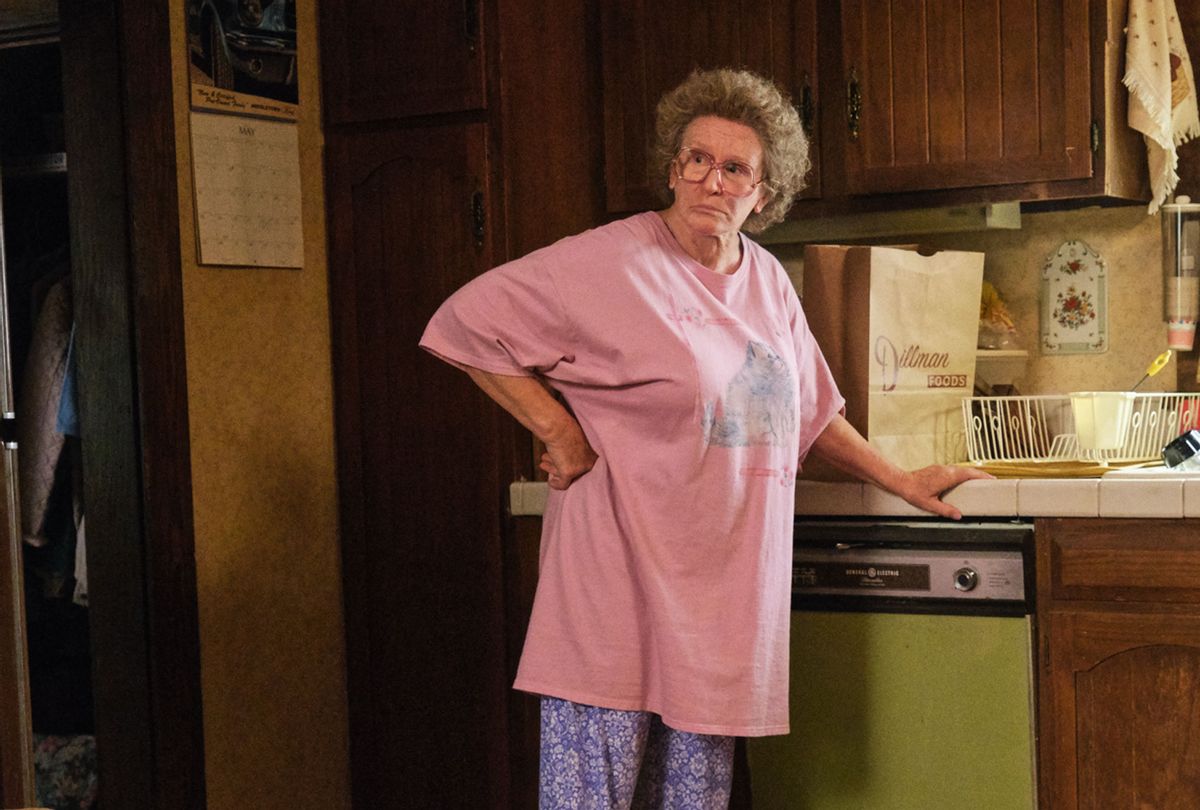 The day my novel was listed by the Los Angeles Times as one of "8 Books to Read Instead of Hillbilly Elegy," I was denied a screener to write about the film. Based on the memoir of the same name by J.D. Vance, the Netflix movie has received overwhelmingly negative reviews leading up to its release this week. The rumor was they had clamped down on advanced screeners—even for journalists with editors and deadlines—because they didn't want more bad PR.

As my friend and fellow Ohioan said: A bunch of rich people made a bad movie and a poor person's work is getting jeopardized by it.

A venture capitalist who has publicly aligned himself as a nationalist and who once entertained running for Republican office, Vance's backstory has a familiar ring for many whose families migrated, but not very far, from the farm to town. Like Vance, I too had a grandmother from Kentucky coal country, and my parents, the first in their respective families to go to college, also raised their children in an Ohio Rust Belt town, dominated by AK Steel, the employer of Vance's Papaw. I remember when the steel workers union went on strike and posted a "Scab of the Week" sign with full names. I remember when the factory was closed.

Vance (played as a child by Owen Asztalos, and young adult by Gabriel Basso) spent youthful summers in central Appalachia; I spent most of my adult life there. My son was born in Appalachian Ohio, at home, and when my then-husband left us, I had to temporarily drop out of school to care for him alone. We fell below the poverty line. Where we remain.

Single moms like me don't fare well in the Ron Howard-directed adaptation, which, like the book, focuses heavily on the addiction struggles of Vance's mother, Bev (Amy Adams), and the violence both experienced and perpetuated by his family, especially his Mamaw, played by Glenn Close. There's a lot of screaming in "Hillbilly Elegy." I'm reminded of my high school theatre teacher, Raymond Gerrell, who advised: If you start yelling at the highest level, there's nowhere for you to go.

Blaming the mother seems in line with Vance's public concern about fertility—which he later claimed was "a joke," but he did say in a Fresh Air interview with Terry Gross that he believed the key to a successful "home life" was to marry someone with no experience of poverty or trauma, which in Vance's case means, apparently, a former clerk for Brett Kavanaugh. It's strange that marry out is not a bigger part of the "Hillbilly" narrative.

But to be fair, there's both a lot to deal with and nothing here in "Hillbilly Elegy."

I'm no film scholar, but I do tell stories for a living, and the film's reliance on voiceover narration is both jarring, inconsistent, and feels lazy: Viewers should be able to piece the story together ourselves. But both that and the chaotic back-and-forth narrative, with its manically inserted flashbacks, provide the structure for the film, because there's not enough real story for a story. It can't work chronologically. It can't be told without heavy artifice.

Perhaps fittingly, the movie was not filmed in Appalachia, but in central Georgia, so you don't even see many of those hills Mamaw waxes poetically about. There are no hairpin turns, no pawpaws or black locust trees.

Common facets of Appalachia—and most rural or small town life—accrue mythical proportions in the film, which lets you know it was created for outsiders: the importance of family, the reverence paid to grandmothers, even taking justice into your own hands because the sheriff is certainly not going to do anything about it.

What is not treated as myth in the film, but should have? That just anyone can "get out" of generational poverty through hard work.

In an article in The Washington Post, Appalachian sociology scholars Lanora Johnson and W. Carson Byrd talk of searching and failing to find the real Appalachia in the movie, concluding that "Unfortunately, we've seen this movie before." Some reader comments on their piece argue the message of "Hillbilly Elegy" is that support and encouragement are key to a child's success.

The key to a white, abled and male child's success, maybe. No women are getting out of poverty in the "Hillbilly" yarn. Nobody who doesn't look exactly like Vance himself.

Black people exist in the world of this film only as a sheriff's deputy, an employee pumping gas in New Jersey, and a Black woman rehab administrator Vance bullies into admitting his mom. None of these characters have more than a couple of throwaway lines.

From one of the very first shots, I knew the Appalachia of this film was not going to be the Appalachia that I, my family, or my friends know: When young Vance rescues a turtle crossing the road, he carries it off with him on his bike. Any self-respecting Appalachian knows you bring the turtle across the road to where it was headed, you don't take it off its (likely egg-laying) path.

My son had already stomped off to his room by that point in the film, refusing to watch any more with me.

Vance's caring nature and encyclopedic knowledge of turtles are early ways the movie lets us know this boy is different from the others: the kids who want to kill the turtle, the boys who beat him up when he can't fight back. J.D. is special. He wants to watch news about Al Gore and Monica Lewinsky. He is no good at cards. He is Other than his family and therefore he will make it.

The film presents Vance as the white male savior of his family, though how exactly he saves them all is unclear. Aspects of the story that might actually be useful to include are utterly absent from the film. How did Bev get clean? How did Vance get to Yale law school from The Ohio State University? My high school classmate who was a first-generation student there dropped out, unable to find support either from his family or from the massive state school. How did Vance manage? We won't know from this film.

No one who is actually poor is going to look at this movie as a roadmap, but people who are in positions of power to deny money and opportunities may. To only laugh at this movie is a mistake, and undercuts its danger, both of spreading inaccurate myths about poverty and completely overshadowing (and disbelieving) the stories of women, BIPOC, disabled people and queer people living in the region and in poverty throughout America.

When I posted on a freelancer's group, desperately seeking a screener so I could write this review, strangers responded by telling me just not to write it, not to give Vance more breath. They misunderstood a key issue: This is a paycheck, and I need a paycheck. Part of being a writer in Appalachia since 2016, when "Hillbilly Elegy: A Memoir" came out, is refuting this man.

How better could that energy be served, that time better spent on our own creative projects, projects Hollywood and the publishing industry seem not to want to pay for? We like our struggle stories male with a side of white.

I don't think this review or most press that "Hillbilly Elegy" has received would make anyone run out and watch the film, other than to use it as a drinking game, which in some cases could actually be physically dangerous. I would not, for example, recommend drinking every time someone threatens to kill someone else or calls a woman a bitch.

But I keep coming back to what my friend said: This movie and the book that sired it not only perpetuate dangerous stereotypes about poverty, about a wide and diverse region, about women and about people struggling with addiction, but stories like these keep money and access from those who need it.

The $45 million Netflix paid to distribute the film means that many other projects will not be funded. It's not only that this movie gets so much wrong. It also takes up so much space.

When my novel was coming out this year, a publicist urged me to downplay the fact that the story was set in my home of Appalachian Ohio. We have Appalachia fatigue, this person based in New York advised, urging me instead to focus on the climate change storyline in the book.

Is there only so much attention we're willing to pay to stories of poverty? What if people will only listen for so long—and "Hillbilly Elegy" drowns out other voices, especially those who have a different experience than Vance's bootstraps act?

"Hillbilly Elegy" doesn't matter. Except for the focus, attention and income it draws away from actual Appalachians' projects. Except for the brain space, energy and time it occupies for rural people, women, people of color, queer people and disabled people living in the region, living in poverty and trying to do the real work of telling their own stories. I can advise you not to give Vance's myth another dime. But I cannot advise you not to give it another thought. Like the very real trauma of poverty — which means I and my neighbors will always work as many jobs as are offered, which means for the rest of my life I will calculate the price of the groceries in my cart to the dollar before the embarrassment of the checkout counter — the hurt lingers. We will continue to fight our battles with those stereotypes privately. Publicly, may we widen the stage so that a diverse array of narratives can dilute the overwhelming influence of Vance's personal story.