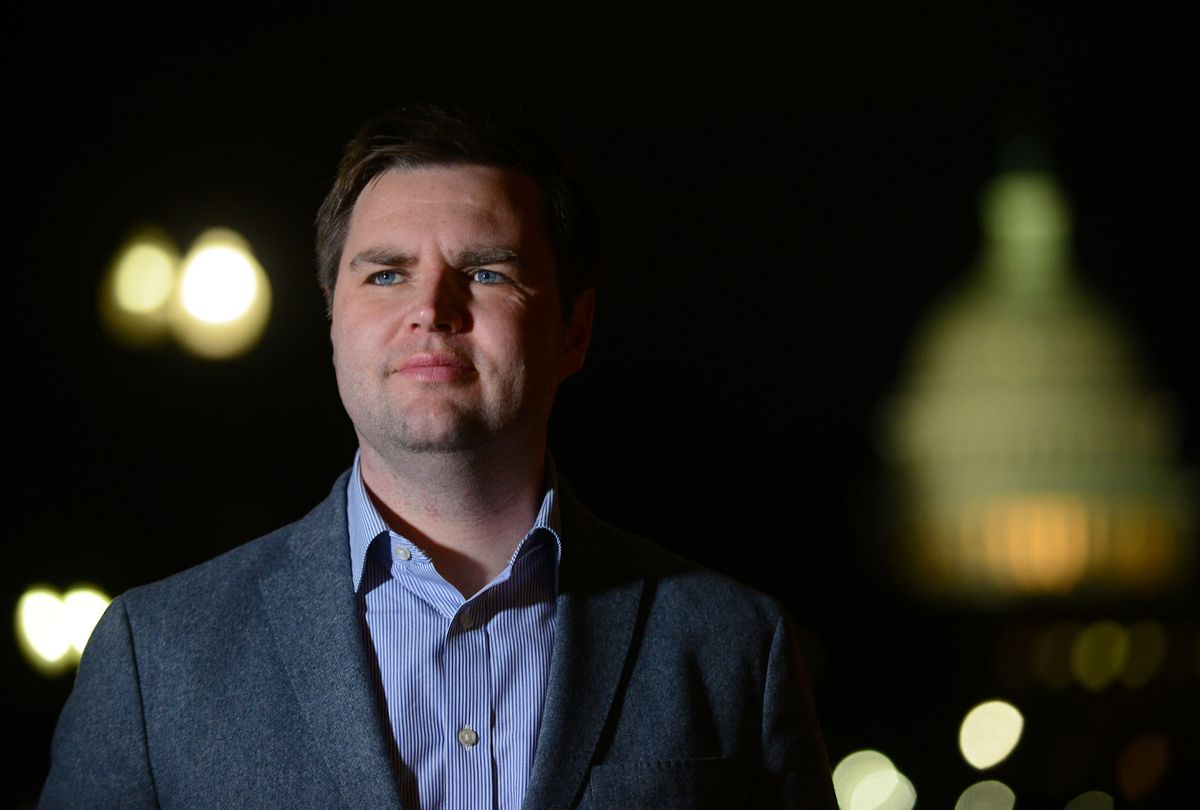 J.D. Vance, author of the book "Hillbilly Elegy," poses for a portrait photograph near the US Capitol building in Washington, D.C. (Astrid Riecken For The Washington Post/Getty Images)
--

J.D. Vance, the author of the best-selling Rust Belt memoir "Hillbilly Elegy" and the whisperer of the white working-class, is under fire after calling himself a "nationalist who worries about America's low fertility."

Critics view the label as a nod to both white nationalism and the "great replacement" conspiracy theory, the racist fear that falling birthrates among white women will lead to whites being replaced by non-whites.

"As a parent of young children and a nationalist who worries about America's low fertility I can say with confidence that daylight savings time reduces fertility by at least 10 percent," Vance wrote in a Sunday evening tweet.

Vance later characterized his tweet as a joke, though he did not clarify its meaning.

He also neither explained his use of the word "nationalist," which over the last few years has been widely associated with white nationalism, nor his curious claims about fertility. (Most Americans set their clocks back an hour over the weekend, returning to standard time.)

Vance's 2017 memoir about growing up in what he describes as extended Appalachia was widely hailed as a sort of Rosetta stone for understanding the plight of the white working-class who supported President Donald Trump in 2016. The book topped best seller lists, making Vance a momentary celebrity pundit as Democrats grappled with Trump's election. The New York Times called it "a compassionate, discerning sociological analysis of the white underclass."

But Vance has also been widely criticized for the conclusions he draws from his experiences, as well as for ignoring racial undertones in the culture about which he writes. His comments over the weekend drew similar criticism after being seen by many as dogwhistles for white nationalism and misogyny.

While some have argued that "nationalism" with no adjectival modifier may apply to anyone who feels positively about their country, Vance, a white man and graduate of Yale law, explicitly connects a worry about fertility rates to his nationalism.

People quickly pointed out that Vance's phrasing echoed the ideology of white supremacists, who have worried for years about declining white birth rates in Western countries. For instance, the white supremacist who carried out a mass shooting at a New Zealand mosque in 2018 repeated the phrase "it's about the birth rates" several times in his manifesto.

A number of right-wing figures in Trump's circle play loosely with the phrase, including Stephens Miller and Bannon, who publicly soften their far-right views with phrases like "populism" and "economic nationalism" and a strategically nonspecific concern for "our civilization." White supremacists have also embraced the generic use of the word "nationalism" as a wink, and Trump himself has used it to troll critics.

"Americans act with the understanding that Trump's nationalism promises to restore traditional boundaries of race, gender, and sexuality," The Atlantic's Adam Serwer wrote in 2017. "The nature of that same nationalism is to deny its essence, the better to salve the conscience and spare the soul."

Jared Yates Sexton, an author and political journalist who grew up in Indiana, has criticized Vance's book as "traditional right-wing propaganda" that traffics in white supremacist undertones. He told Salon that Vance's comments revealed what many people had long suspected.

"J.D. Vance has spent the past few years sanitizing right-wing appeals and camouflaging white supremacist-pandering," Sexton said. "I'm surprised it took him this long to let his mask slip."

"It's an effective troll, because you can't 'prove' that these people are malicious when there's always the outside, absurd possibility that they might not know what they're saying," Marcotte said. "But it is also part and parcel of what white supremacist groups like the Proud Boys do: making white nationalist arguments that are rooted in misogyny."

While Vance later framed his concern as applying to the country's ability to sustain its social net as the population ages, the U.S. has historically supplemented its workforce with an open immigration policy. It is unclear why internal birth rates would alone cause Vance such concern.

Salon reached out to Vance through his publisher, but did not receive a reply.