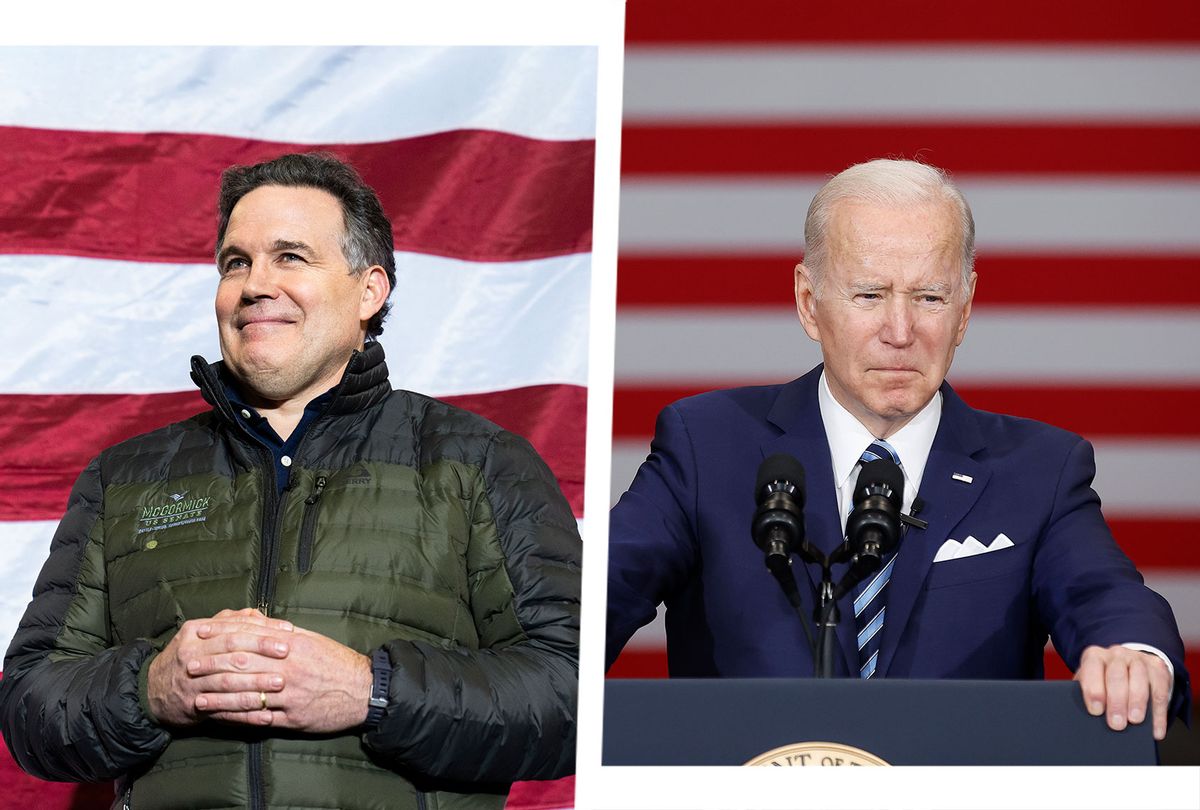 The 30-second ad, released by David McCormick, a former hedge fund manager running for the U.S. Senate in Pennsylvania, highlights a number of conservative gripes with the Biden administration, including record inflation, the recent surge in crime, the U.S. withdrawal from Afghanistan, and illegal border crossings.

After rattling off these talking points, the ad concludes: "This is so much bigger than Brandon."

The chant "Let's go Brandon" was first coined back in October, when a Talladega Superspeedway reporter mistook the crowd's chant ("F*ck Joe Biden") for "Let's Go Brandon" during a televised interview.

Since then, the phrase has taken hold amongst right-wingers as a way to insult President Biden without naming him directly.

In an interview announcing his ad, McCormick told Fox News that "the issues we are facing are so much bigger than 'Brandon.'"

"Whether it's not being able to afford gas or groceries because of record-high inflation, rampant crime in our cities, a dramatic spike in the trafficking of fentanyl and human exploitation across open borders, or the disgraceful lack of accountability for the death of 13 young service members in Afghanistan – these problems were self-inflicted by Joe Biden and the extreme policies of the left," the former executive said. "Pennsylvanians have had enough."

McCormick, the former CEO of asset management firm Bridgewater Associates, served as the Under Secretary of the Treasury for International Affairs during the Bush administration. He is vying to replace Sen. Pat Toomey, R-Penn., who in 2020 indicated that he would not be running for re-election.

On Sunday, Lamb tore into McCormick's ad over Twitter, writing: "Dave McCormick is too much of a coward to say 'Let's Go Brandon' himself, but pathetic enough to spend millions on a Super Bowl ad to say it for him."

"I'm not a hedge fund CEO & don't have my own millions. Help us beat this nonsense," he added.

RELATED: Senate Republicans keep bailing out for 2022, opening the door for more Trumpers

While McCormick hails from a bygone era of Republican "respectability," his latest ad indicates that he is willing to join the fold of Trumpism.

As Politico reported last month, immediately after the Capitol, McCormick said that Trump bore "a lot of responsibility" for the "divisiveness" of the previous four years and that he "really appreciated Biden's tone. But since announcing his Senate bid, the former executive has "MAGA-proofed" his campaign, running on an "America First" platform with endorsements from Sen. Ted Cruz, R-Tex., former Secretary of State Mike Pompeo, and former White House press Secretary Sarah Huckabee Sanders.