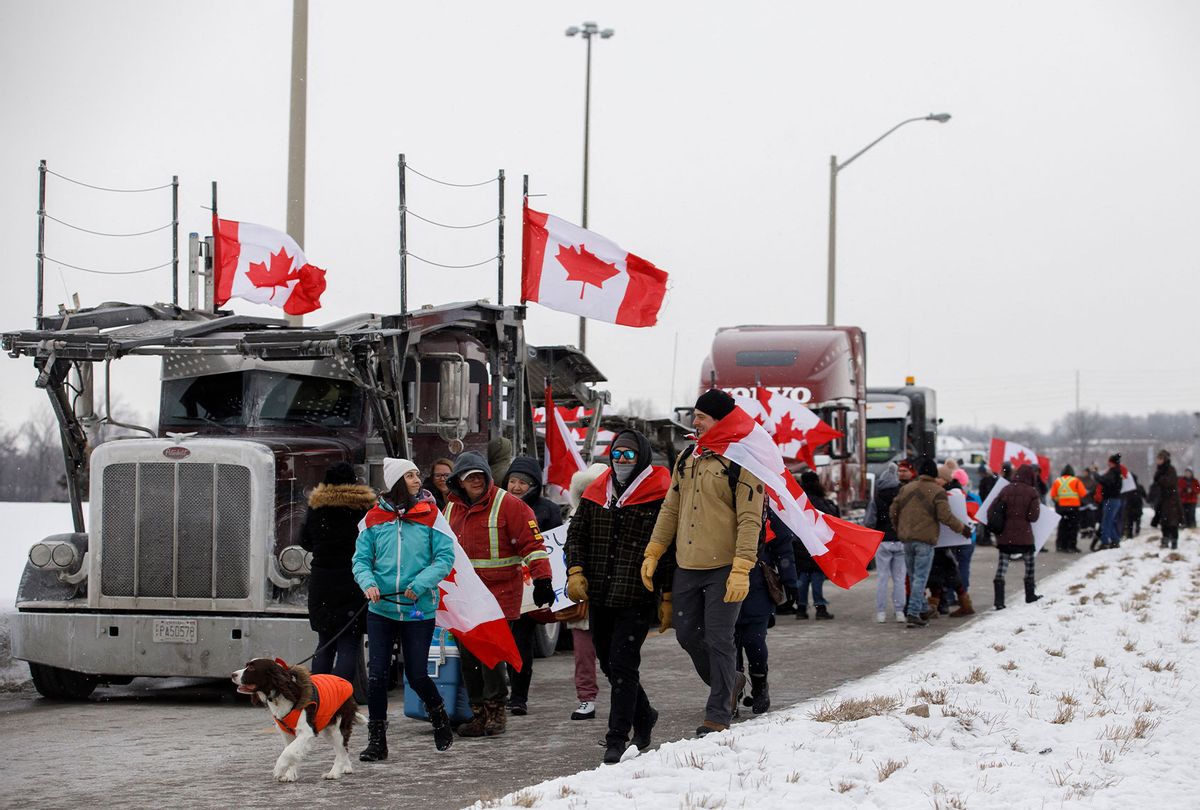 Supporters for a convoy of truckers driving from British Columbia to Ottawa in protest of a Covid-19 vaccine mandate for cross-border truckers, gather near a highway overpass outside of Toronto, Ontario, Canada, on January 27, 2022. - A convoy of truckers started off from Vancouver on January 23, 2022 on its way to protest against the mandate in the capital city of Ottawa. (COLE BURSTON/AFP via Getty Images)
--

In Ottawa, Canada's capital city, a convoy of anti-vax truckers have been protesting against the Canadian government's COVID-19 vaccine requirement for truckers reentering Canada from the United States — and many Ottawa residents have grown impatient with the traffic jams and gridlock they have created. Some of those Ottawa residents, according to LGBTQ Nation's Bil Browning, have responded by "using an explicit heavy metal song about gay cowboys having sex to overpower the group's communications and broadcast it to anyone listening."

The song is "Ram Ranch," a 2012 recording by Canadian rocker Grant MacDonald. "Ram Ranch," Browning reports, "is being blasted over several Zellow channels dedicated to the convoy."

"The right-wing activists would frequently start to sing songs like the Canadian national anthem, and it gave the folks behind #RamRanchResistance the idea of turning patriotic into pornographic," Browning explains. "Over and over, the activists interrupt the various channels to broadcast the 2012 tune that starts with '18 naked cowboys in the shower at Ram Ranch.' And then, signs started popping up all over town telling the truckers, 'Welcome to Ram Ranch.'"

McDonald was glad to know his song was being used by #RamRanchResistance. The singer told Rolling Stone, "I'm just elated, totally elated that my song could be used to stand up for science."