The fatal incident left five people injured and one dead during a racial justice protest in Portland, Oregon 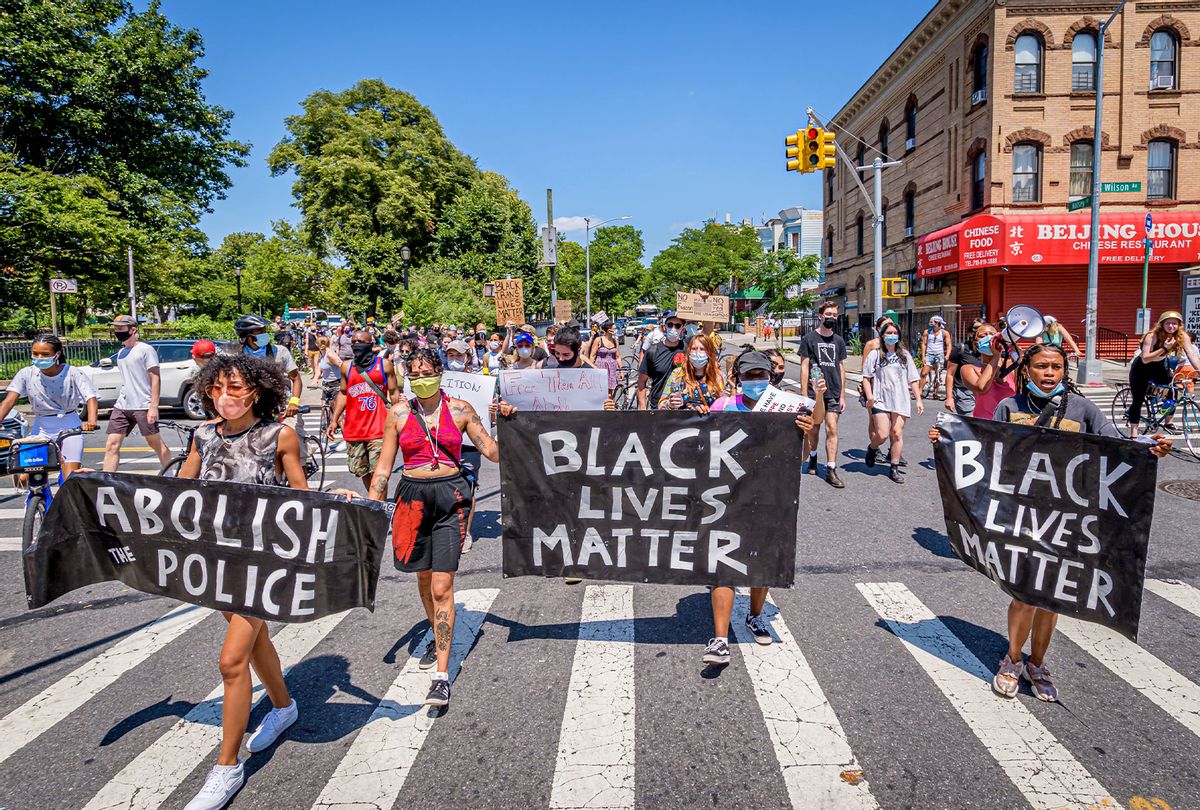 Participants marching and holding banners at the front of the match. Brooklynites gathered at Irving Square Park for a march in the streets of Bushwick, demanding justice for all victims of police brutality, bringing light to the situation in Portland, also to make a loud call to defund the NYPD and invest in communities. Street Riders NYC participated by sending bikes to act as a buffer and shield protesters from cars and police. (Erik McGregor/LightRocket via Getty Images)
--

A far-right Oregon machinist with a history of threatening behavior was charged with murder on Tuesday after police identified him as the man that allegedly opened fire on a group of protesters in Portland, Oregon this past weekend.

Benjamin Smith, 43, allegedly began yelling at a crowd of racial justice protesters and volunteers in Normandale Park on Saturday night, according to an affidavit obtained by KATU News. After a number of people asked Smith to leave, he allegedly opened fire into the group, injuring five and killing 60-year-old Brandy Knightly, who went by the first name June, a volunteer with a traffic crew for the protest. Knightly was described by friends as "a fixture of Portland's protest movement." Out of the others injured, two of the surviving victims are in the hospital, with one permanently paralyzed.

In a news release on Sunday, police claimed that "the incident started with a confrontation between an armed homeowner and armed protesters."

However, Dajah Beck, 39, one of the victims, disputed law enforcement's account over Twitter, writing, "We were unarmed traffic safety volunteers who weren't with any protestors."

"Four women trying to de-escalate & he unloaded a 45 into us because he didn't like being asked to leave and stop calling us terrorist c*nts," she added.

Police said that "the scene was extremely chaotic, and a number of witnesses were uncooperative with responding officers," adding: "Most people on scene left without talking to police."

Smith faces charges of murder, attempted murder and assault, and is currently "hospitalized in serious condition" due to a gun shot in the hip as the result of return fire from a citizen.

The person who shot Smith "remained at the scene, cooperated with investigators, and was later released," police said in an email to CNN.

On Tuesday, The Oregonian and Oregon Public Broadcasting (OPB) reported that Smith had a past of making antisemitic and racist comments online. The 43-year-old reportedly praised Kyle Rittenhouse, the 18-year-old who recently stood trial after shooting and killing multiple George Floyd protesters in Koshoa, Wisconsin in 2020.

"As the years went on, he's just gotten more and more radicalized. He got angrier and angrier," Smith's roommate, Kristine Christenson told OPB. "I have not been comfortable living with him for a while. I did not feel safe with him, especially this last two years with the whole COVID thing. I think that made him even more angry."

In a post to the forum Free Fur All 2022 Unofficial Chat, Smith reportedly praised the Proud Boys, a neo-fascist militant group with a history of engaging in political violence.

"If proud boys shot up somebodies [sic] car they probably deserved it," he wrote. "Thus far they sadly haven't shot up someones car, because good christ that needs to happen."

Smith was also an apparent member of the furry community in Portland, which said that he'd been ostracized because of his hateful beliefs and "violent tendencies."