Trump, who repeatedly praised Putin, falsely blamed the attack on his "rigged election" 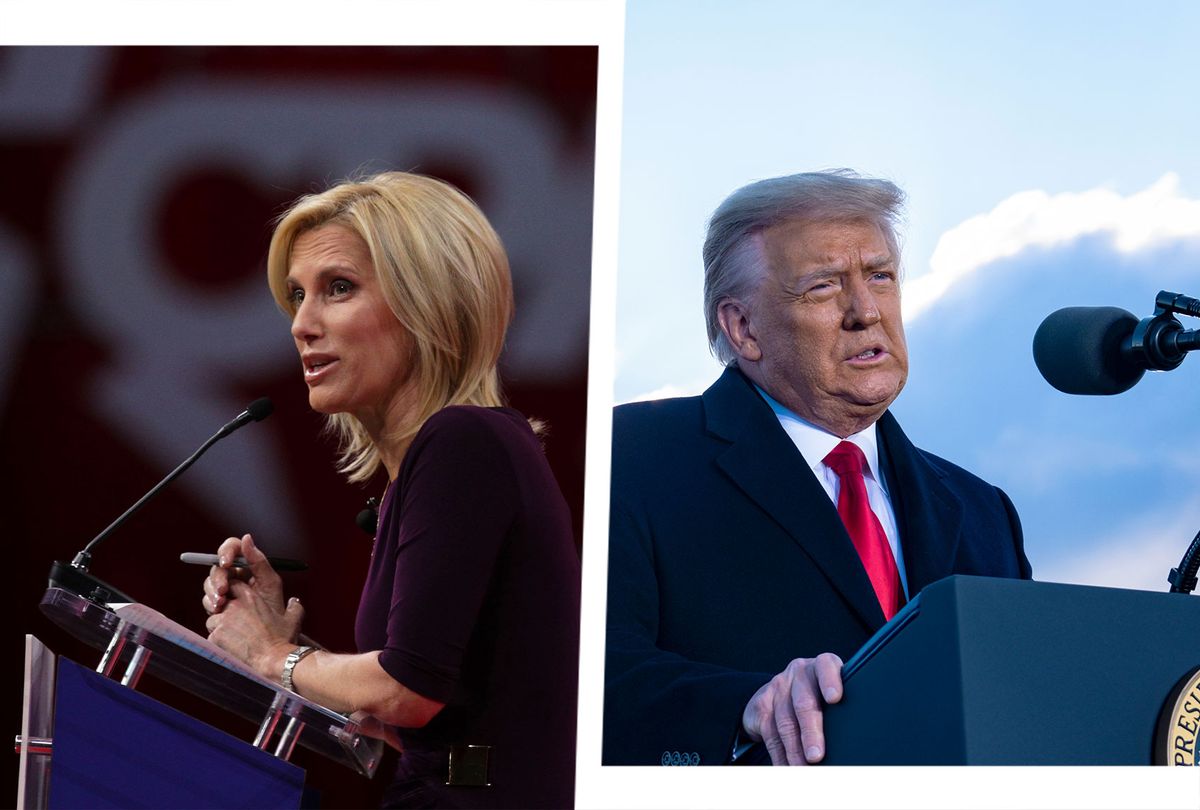 Former President Donald Trump called in to Fox News Wednesday after Russia launched an air offensive in Ukraine but seemed terribly confused about what was happening on the ground.

Trump abruptly phoned in to Laura Ingraham's show shortly after Russian President Vladimir Putin announced a military offensive seeking to overthrow the Ukrainian government. During the interview, Ingraham noted that the network had learned that "U.S. officials are looking at a potential amphibious landing now in Odessa, Ukraine," referring to a potential ground invasion of the city by Russian forces. Later in the interview, Trump mistook the comment to mean that the US was planning an amphibious landing and scolded Ingraham for giving away American plans.

"Well, I think the whole thing, again, would have never happened. It shouldn't happen. And it's a very sad thing," Trump said. "But you know what is also very dangerous is, you told me about the amphibious attack by Americans, because you and everyone else shouldn't know about it. They should do that secretly, not being doing that through the great Laura Ingraham. They should be doing that secretly. Nobody should know that, Laura."

"No, those are the Russian — the Russian amphibious landing," she told the former president.

"Oh, I thought you said we were sending people in," Trump said.

That would be news. President Joe Biden and other western leaders have repeatedly ruled out deploying troops to Ukraine.

"We are not going to be in a war with Russia or putting military troops on the ground in Ukraine fighting Russia," White House press secretary Jen Psaki said hours before the interview.

The Fox report also turned out to be wrong. The Ukrainian military told Reuters that reports about a Russian landing in Odessa were "false," though Russian troops did enter other parts of the country.

Ingraham, who earlier called Ukrainian President Volodymyr Zelensky "pathetic" for giving a speech directed at Russian people ahead of the invasion, also asked Trump about his views on NATO. The former president used the opportunity to blame the invasion on his election loss, which he falsely called "rigged," and insisted that Putin never would have invaded if he was still president.

"A month ago or three weeks ago, all the so-called experts said that Putin would just be content with staying in the separatist regions. But given what's unfolding, sadly with weakness in the United States, they just decided to go for it. It looks like they are going for it," Ingraham said. "Where does that leave the NATO alliance?"

"He sees the weakness and stupidity of this administration. As an American, I am angry and saddened," Trump replied. "It happened because of a rigged election."

Trump, who has repeatedly praised Putin, claimed that the Russian leader did not want to invade Ukraine "initially" and wanted to "negotiate" but saw "weakness" in Biden's withdrawal from Afghanistan – a withdrawal that the Trump administration negotiated with the Taliban. Trump said he had a "good relationship" with Putin that was "hurt by the Russia hoax."

"He was gonna be satisfied with the peace," Trump said. "And now he sees the weakness and incompetence and stupidity of this administration."

Trump previously praised Putin as "genius" and "very savvy" for his handling of the invasion. Putin on Wednesday claimed that he was deploying troops to "denazify" Ukraine, a country led by a Jewish president, after a well-choreographed propaganda campaign aimed at justifying the invasion as a so-called peacekeeping operation. While some foreign policy experts predicted that Putin was only using the troop buildup around Ukraine as leverage for concessions from the west or that he only sought to deploy troops to separatist-held regions, Russia unleashed a barrage of missile attacks on Ukraine's capital of Kyiv and other western cities close to the Polish border on Wednesday night. Russia said it was only targeting military installations but Ukraine said that Russian missiles also hit civilian areas. At least 68 people, including civilians, were killed overnight, Ukrainian officials told AFP.

Shortly before missiles landed in the country's capital, Trump praised Putin during a fundraiser at his Mar-a-Lago resort.

"I mean, he's taking over a country for $2 worth of sanctions. I'd say that's pretty smart," Trump said in a video recorded at the event.

"Former President Trump's adulation of Putin today - including calling him a 'genius' - aids our enemies," she wrote. "Trump's interests don't seem to align with the interests of the United States of America."