I grew up under the fear of nuclear war. The news we consume now is often lacking in crucial context 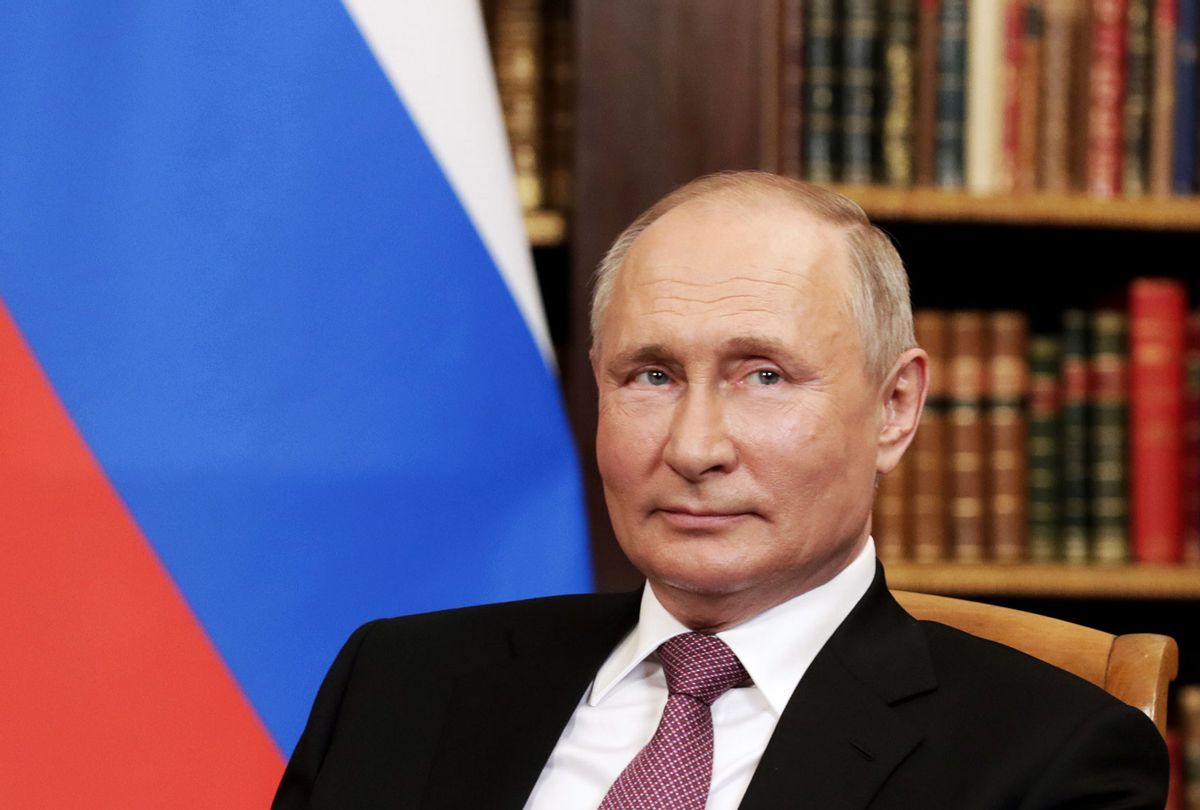 Russia's President Vladimir Putin looks on during talks with US President Joe Biden at the Villa La Grange. (Mikhail Metzel\TASS via Getty Images)
--

I think "The Golden Girls" puppet show may hold the key to our future.

But first, the past, when we thought we might not have a future: Once a month when I was an elementary school student our school conducted "disaster" drills. This was different from our monthly fire drills. To practice for a school fire, when the warning bell sounded we all gathered together and walked single file out of the school, quickly and quietly. More than a few of us, while standing outside waiting for the all clear, gleefully imagined our schools burning down as we watched.

The disaster drills were quite different. When the alarm sounded for a disaster drill we walked into the hall single file, sat against the wall with our legs crossed and were told to "duck and cover."  The disasters we were told we prepared for were tornadoes and/or nuclear war.

The idea of protecting yourself from a nearby nuclear explosion seems quaint or futile today. For those of us who came of age in those times, there's no way to adequately explain our fear that the Soviet Union and the United States would destroy themselves in a paroxysm of nuclear violence, ending life as we knew it on our planet.

This fear culminated in the arrival of Ronald Reagan to the Oval Office. Reagan, a hardcore Cold Warrior, involved the world in nuclear brinkmanship. Previously, the Soviet Union and the United States had exercised nuclear restraint under the Mutually Assured Destruction (or MAD) policy: If anyone started a nuclear war, we would all die. Reagan changed that. He and his administration became convinced a nuclear war was winnable, which Robert Scheer wrote about in explicit detail in his 1982 book, "With Enough Shovels: Reagan, Bush and Nuclear War."

"Dig a hole, cover it with a couple of doors and then throw three feet of dirt on top . . . it's the dirt that does it . . . if there are enough shovels to go around everybody's going to make it," T.K. Jones, Deputy Under Secretary of Defense for Strategic and Theater Nuclear Forces, infamously declared.

As a young adult, I was terrified. My girlfriend (now my wife of 39 years) and I wondered if we should bring children into this world. The watershed event of that extremely fearful time was an ABC broadcast in 1983, "The Day After," starring Jason Robards, Steve Guttenberg, John Lithgow and JoBeth Williams. That television movie explicitly showed us for the first time what would happen as a result of nuclear war. More than 100 million Americans watched that original broadcast on November 20, 1983. It remains the most watched TV movie in U.S. history.

RELATED: Is it time for a 21st-century version of "The Day After"?

A special edition of "View Point" hosted by Ted Koppel aired directly after the movie. It began with Koppel telling American viewers to look out their window. "It's all still there," he reassured us. "Is there still time?" Koppel then asked, wondering as Scrooge did in "A Christmas Carol" if the movie we just saw depicted a future that would be, or only may be. He was joined by a live audience, as well as Henry Kissinger, Elie Wiesel, William F. Buckley Jr., General Brent Scowcroft and Robert McNamara, who had written earlier that year that "nuclear weapons are totally useless except only to deter one's opponent from using them." Also joining them was scientist Carl Sagan.

That night Sagan introduced the world to the concept of nuclear winter. Of the Cold War pitting the U.S. against the U.S.S.R, he famously said, "Imagine a room awash in gasoline, and there are two implacable enemies in that room. One of them has 9,000 matches, the other 7,000 matches. Each of them is concerned about who's ahead, who's stronger."

Some argued later that the movie — and, more importantly, Koppel's frank discussion — seen by millions led to a walk away from nuclear brinkmanship. A little more than five years later the Cold War was over. The Berlin Wall came down and the world took a breath. It was at that time my wife and I had our first child. We had delayed, in part, because we didn't want our children to live in the same world in which we grew up.

For more than 30 years thoughts of an apocalypse caused by nuclear conflagration have taken a back seat to climate change, a stray asteroid, a rogue comet, a pandemic or a variety of other extinction level events.

Then Tuesday, a young reporter who frequents the White House texted me and asked if I was worried about World War III. Another reporter asked me if I thought we could survive it. I confess I hadn't thought of such scenarios in years. But Russian President Vladimir Putin, a former KGB officer with delusions of grandeur, has ordered "a special military operation" on Ukraine. That renewed thoughts I had buried for more than three decades.

The equation remains fundamentally unchanged from 1983. Both countries have arsenals that would render Earth a glowing radioactive hellhole long enough to extinguish all life on the planet. The only people who wouldn't have to worry about the initial blast would be any astronauts in space. But they'd have no home to return to.

Biden knows all of this. Yet, the news we get about Ukraine and from reporters is often lacking in political and historical context, distorts reality and contributes to the potential for a widening conflict. It helps no one that former President Trump publicly sided with Putin, thus further driving a wedge in the American electorate as Biden tries to stop a war.

There are several things to consider. Could Putin's game in Ukraine lead to a shooting war that includes the U.S.? Could that lead to a nuclear confrontation? The answer to both questions is undeniably yes. Biden knows this too and is playing a long game of slowly strangling the Russian economy with sanctions to halt the threat of expanded war. Putin, who put off his provocative moves until after the Beijing Winter Olympics, is counting on China to be his ally and bail him out with essential raw materials the rest of the world has promised to deny Russia through sanctions. If Putin advances no further than Ukraine on the battlefield it will be a matter of who will blink first. Biden, who knows very well the consequences of the Cold War and how Putin wishes to change the outcome, is also well aware of how quickly things can escalate. Yet, there are still U.S. and NATO troops in close proximity to Ukraine, and Biden has vowed to defend NATO.

In  "The Hunt for Red October," former Congressman Fred Thompson, also an actor, played an admiral who summed it up nicely. "This business will get out of control. It will get out of control and we'll be lucky to live through it," he warned. An even more ominous warning was issued by Richard Jordan's Jeffrey Pelt to his Soviet ambassador counterpart: Having our troops and their troops in such close proximity was inherently dangerous. "Wars are started that way," he finished.

That's the rub. Volatility on the battlefield is rarely controllable. Escalation is not only possible but probably inevitable under such circumstances — and playing "chicken," as Putin is doing, rarely goes as intended. Make no mistake, Biden knows what he's doing and deserves our full faith. Dealing with Putin is well within his wheelhouse.

Today's problems are exacerbated by Donald Trump, who called the annexation of Ukrainian breakaway regions "genius" on the part of Putin. Naturally those who still look at Trump as their messiah are calling Biden "a loser" and "asleep at the wheel."

The only way to clean up that part of the equation is with better information, which could also lead to better policy, more accurately informed Americans and eventually — one would hope — better informed politicians. (Trump not withstanding.)

Today's Ukrainian conflict is also exacerbated by the ignorance of those who embolden Putin by supporting Trump. Or as one Christian Trump supporter told me, "It's not our problem. We have enough problems with sleepy Joe," he said, channeling the spirit of Neville Chamberlain.

Which brings me back to "The Golden Girls." I was never a fan of the show, but my wife was, so when "That Golden Girls Show!," a parody with puppets, opened at the Strathmore in D.C., I was obliged to go. I marveled at how a sitcom more than 35 years old is still so popular. And as I watched, I wondered why original ideas weren't nearly as popular. After all, "The Golden Girls" was once an original idea and it obviously caught on and even endured — even NFL players like Buffalo Bills wide receiver Stefon Diggs is clearly a huge fan. I looked around for him Tuesday, and while I didn't see him, I was impressed with the diversity of the audience in the theater. Two guys with MAGA hats sitting in that crowd made me think.

And that took me back to something said by Edward R. Murrow at the Radio Television News Directors Association annual meeting in 1958. "We are to a large extent an imitative society. If one or two or three corporations would undertake to devote just a small fraction of their advertising appropriation along the lines that I have suggested, the procedure might well grow by contagion . . ." Murrow was discussing the need for large corporations to invest in producing solid news and delivering it to the American public.

That's what the crisis in Ukraine underlines in today's news and political world: There are millions who don't remember what the Cold War was like, the threat to our survival Russian aggression presents, and how one madman like Putin could bring it all down.

You heard it here first: "The Golden Girls" could save the planet. If one sitcom can survive and be so popular that a puppet show about the original show can sell out theaters, just imagine what one network or newspaper dedicated to real journalism could do for us all. Maybe Murrow was right about us being an imitative society. If one network did it and it caught on then others might follow.

At least if some in the news industry were as bold as the producers of a puppet show, we'd have a fair chance of understanding actual threats to our existence — like Putin or Trump — when they show up on the world stage.

Putin is essentially trying to rewrite the end of the Cold War. That's another lesson to be learned by TV: Reruns don't change. Putin just needs to watch more "Golden Girls." Maybe he'll get the message.

More stories about Putin and Ukraine: